The incidence of type 1 diabetes is about 0.1–36.5/100,000 persons with a 3.2%–5.3% annual increase rate in North America, Europe, and Asia [1]. The increasing number of patients with type 1 diabetes presents a significant public health challenge. The onset of type 1 diabetes usually occurs before the age of 30. Therefore, this disease could affect many women of reproductive age. Pregnancies in women with type 1 diabetes are often associated with increased risks of multiple maternal and fetal adverse outcomes. Improving care for diabetic patients to reduce a risk of associated complications is the goal of diabetes management [2].

The pregnancy outcomes in type 1 diabetic patients reported between 1991 and 2003 are grim [3, 4]. High rates of maternal and fetal adverse outcomes highlight the challenges physicians face in the management of pregnant patients with the disease. The causes of adverse pregnancy outcomes may include a high proportion of unplanned pregnancies with prior poor glycemic control, failure to maintain tight metabolic control during pregnancy, and preexisting medical comorbidities, such as nephropathy and hypertension [3–6].

Care for type 1 diabetes has advanced with time. Preconception and early pregnancy care to achieve optimal glycemic control has lowered perinatal mortality and the rate of fetal malformations [7]. The widespread adoption of blood glucose self-monitoring has enabled patients to adjust their insulin dose in a timely manner and modify their lifestyle to control their glucose levels. Compared with human insulin, a fast-acting insulin analogue has been demonstrated to lower the risk of fetal adverse outcomes [8]. New insulin delivery systems, including continuous subcutaneous insulin infusion, sensor-augmented pump therapy, and closed-loop insulin delivery, have also provided additional tools to improve glycemic control. In addition to glycemic control, multidisciplinary patient-centered care of type 1 diabetes before and during pregnancy likely has led to better gestational outcomes [9].

Despite these efforts, however, the potential impact of modern diabetes management on the outcomes of pregnant women with type 1 diabetes has not been evaluated in a large cohort. In this nationwide population-based study, we analyzed the Taiwan National Health Insurance Research Database, Birth Registry, and Death Registry, all of which are representative of the general population, to identify pregnancies between 2001 and 2012 and compare a comprehensive set of maternal and neonatal outcomes between the pregnancies of women with type 1 diabetes and those without the disease. 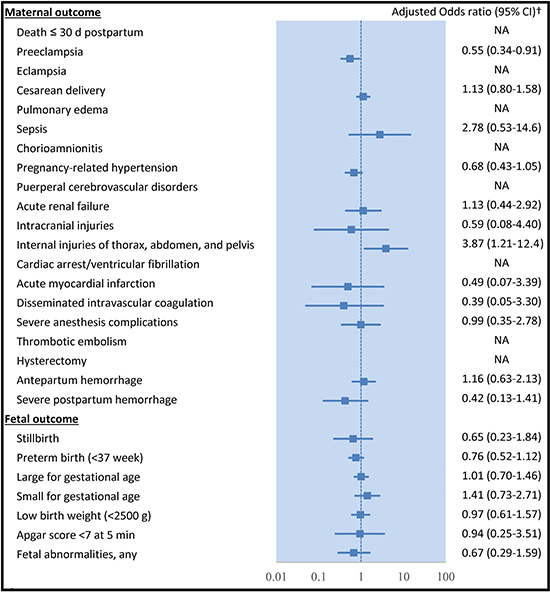 Figure 1: Comparison of outcomes between early period (2001–2010) and late period (2011–2012) among pregnant women with type 1 diabetes. Type 1 diabetic women had a lower risk of developing preeclampsia during the late period than the early period. The differences in other pregnancy outcomes did not show any statistical significance between the two periods. † Adjusted for age, infant sex, place of residence, income, occupation, calendar year, and Charlson comorbidity index. CI, confidence interval; NA, not available.

In this study, we found a 4.8-fold increase in the number of pregnant women with type 1 diabetes between 2001 and 2012. This observation highlights the importance of improvements in the gestational outcomes of this population. However, the incidence of type 1 diabetes had not changed significantly (around 2.75–3.56 per 100,000 persons) between 2000 and 2009 in Taiwan [10].

Our data revealed alarmingly higher risks in many adverse outcomes in pregnant women with type 1 diabetes as compared with those without the disease. These findings were unexpected. The National Health Insurance program was built in 1995 in Taiwan to reduce barriers to the health care system for all citizens [11]; nearly all diabetes-related treatment costs are reimbursed for type 1 diabetes, and diabetes care is provided by teams consisting of physicians, certified educators, and dietitians. However, these management measures appeared to have been insufficient to lead to satisfactory results in pregnant women with type 1 diabetes between 2001 and 2012 in the country.

We found that the only improvement in outcome was a lower risk of preeclampsia in the late period as compared with that in the early period in pregnant women with type 1 diabetes. The reasons behind for this improvement are unclear. Better glucose and blood pressure control, dietary and lifestyle modification, low-dose aspirin, and calcium supplementation in women with low dietary calcium intake have been reported to reduce the risk of preeclampsia [12–16]. We further supposed that the availability of free glucose test strips had relieved the financial stress associated with the disease and led to better diabetes care and outcomes. The decreased risk of preeclampsia is of high clinical significance because preeclampsia is associated with maternal morbidity and mortality during pregnancy and is a strong predictor of future cardiovascular disease in mothers [17, 18].

Except preeclampsia, no improvement in maternal and fetal outcomes in the late period was found among pregnant women with type 1 diabetes. Similar to our results, a recent study also reported difficulty in improving pregnancy outcomes in women with type 1 diabetes [19]; high rates of adverse pregnancy events, including preeclampsia, cesarean delivery, premature birth, and large for gestational age, were reported in that study population. The excellent glycemic control achieved by the sensor-augmented pump therapy and closed-loop insulin delivery system described in that study was worthy of note. These data indicate that optimal glycemic control during pregnancy is insufficient to achieve promising pregnancy outcomes in this population.

To obtain greater insights into the trend of pregnant outcomes in women with type 1 diabetes from 2001 to 2012, we perform a joinpoint regression analysis (Supplementary Figure 1). Among the nine outcomes including over 36 events during the 12-year study period, preeclampsia demonstrated the greatest improvement (−4.6% of average annual change), followed by pregnancy-related hypertension (−3.6%); however, none of these outcomes reached statistical significance according to this analysis.

This study showed a higher prevalence of multiple comorbidities in women with type 1 diabetes than in women without the disease. These comorbidities include myocardial infarction, congestive heart failure, renal disease, chronic pulmonary disease, liver disease, and peripheral vascular disease. Similar to our results, a recent report noted the frequent prevalence of diabetes-related complications and comorbidities among young adults who had been diagnosed with type 1 diabetes [20]. Early monitoring of the youth with diabetes for development of complications is suggested.

Several strengths are highlighted by this study. First, this study analyzed a large population-based National Health Insurance Database in Taiwan. The national health insurance has provided universal coverage of medical care to around 99.0%–99.5% of the entire population (approximately 23 million persons) since 1995. The National Health Insurance Research Database was established to facilitate research on health care in 1997. This database includes information on personal features (sex, date of birth, place of residence, income level, and employment); details of clinical information, including diagnoses related to inpatient and outpatient care and procedures; and prescribed medications and operations. Second, this study enrolled 2,350,339 pregnancies, including 630 pregnancies with type 1 diabetes; thereby providing some statistical power to detect differences in multiple pregnant outcomes between two cohorts.

In conclusion, our data indicate that type 1 diabetes remains a significant disease threatening pregnant women and their offspring. Clinicians should be aware of this clinical situation.

This study used data from the Taiwan National Health Insurance Research Database established by the Bureau of National Health Insurance [11, 23]. Pregnancies of ≥ 20 weeks occurring in Taiwan between January 1, 2001 and December 31, 2012 were identified from the database, where clinical information regarding pregnant women had been recorded. In addition, gestational age, birth weight, Apgar score, and fetal outcomes were obtained from the birth registry recorded by obstetricians. The reporting of fetal information to the Ministry of Health and Welfare is mandated by law. This study was approved by the Institutional Review Board of Chang Gung Memorial Hospital and the Ministry of Health and Welfare, Taiwan (104–8042B). The need for informed consent was waived because all data were completely anonymous.

Maternal adverse outcomes were selected according to the Centers for Disease Control and Prevention’s severe maternal morbidity composite outcomes [26]. These measurements are frequently used to indicate outcomes related to hospitalization during pregnancy, including death within 30 days of delivery, cesarean delivery, and pregnancy-related complications, such as pregnancy-related hypertension, preeclampsia, eclampsia, hemorrhage, preterm labor, and chorioamnionitis [27].

The effects of type 1 diabetes on maternal and fetal adverse outcomes were analyzed. The covariates for multivariate analysis included age and infant sex for Model 1 and age, infant sex, place of residence, income level, occupation, calendar year, and Charlson comorbidity index for Model 2. ORs with 95% confidence intervals were calculated using logistic regression for each maternal and fetal outcome between the type 1 diabetes and control groups, using SAS, version 9.4 (SAS Institute Inc.). This analysis was also preformed to evaluate the ORs of outcomes in pregnant women with type 1 diabetes between the early period (2001–2010) and the late period (2011–2012). Similar analyses were used to evaluate pregnant complications in prior reports [4, 18, 22, 28]. P < 0.05 was considered statistically significant.

We acknowledge the Center for Big Data Analytics and Statistics at Chang Gung Memorial Hospital for designing the study and monitoring, analyzing, and interpreting the data.

12. Hiilesmaa V, Suhonen L, Teramo K. Glycaemic control is associated with pre-eclampsia but not with pregnancy-induced hypertension in women with type I diabetes mellitus. Diabetologia. 2000; 43:1534–1539.