Ovarian cancer is one of the leading cause of death in women worldwide [1, 2]. Despite recent advances of combined therapies including surgery and chemotherapies, the prognosis of advanced stage ovarian cancers remains poor. In addition, the molecular mechanisms involved in ovarian carcinogenesis and chemoresistance are poorly defined, which limits the efficiency of clinical treatment. Thus identifying molecular targets which are responsible for ovarian cancer progression and drug resistance is crucial for the development of novel diagnostic and therapeutic strategies [3, 4].

microRNAs (miRNA) exert their biological function through post-transcriptional downregulation of target genes [5, 6]. Dysregulation of microRNA contributes to ovarian carcinogenesis and malignant progression [7–10]. miR-488 participates in the process of several human diseases such as peritoneal fibrosis and panic disorder [11, 12]. miR-488 dysregulation is also involved in carcinogenesis. miR-488 inhibits proliferation and induces apoptosis by targeting androgen receptor in prostate cancer [13]. miR-488 targets ZIP8 in osteoarthritis which reduced cartilage degradation [14]. miR-488 is downregulated in gastric cancers and functions as a tumor suppressor by targeting PAX6 expression [15]. To date, clinical significance of miR-488 and its biological function in ovarian cancers have not been explored.

In this study, we examined miR-488 expression in paired ovarian cancer tissues using realtime PCR. We further investigated the effects and mechanisms of miR-488 on chemoresistance and mitochondrial function of ovarian cancer cells.

miR-488 is downregulated in ovarian cancers 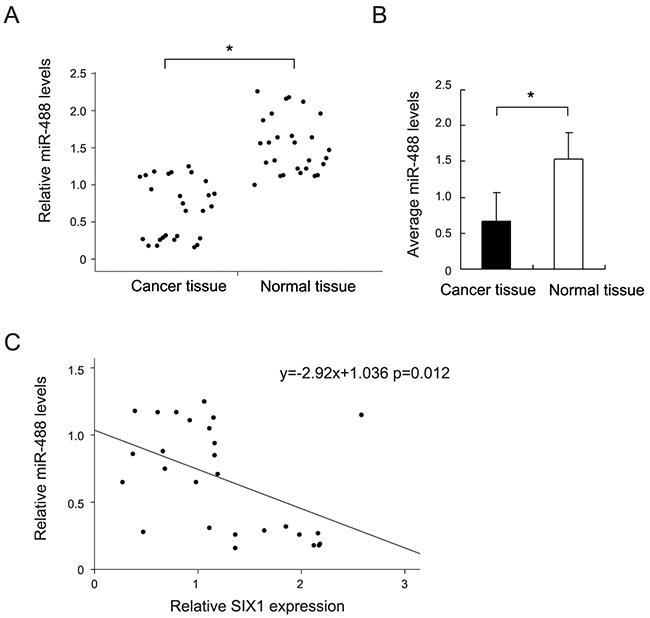 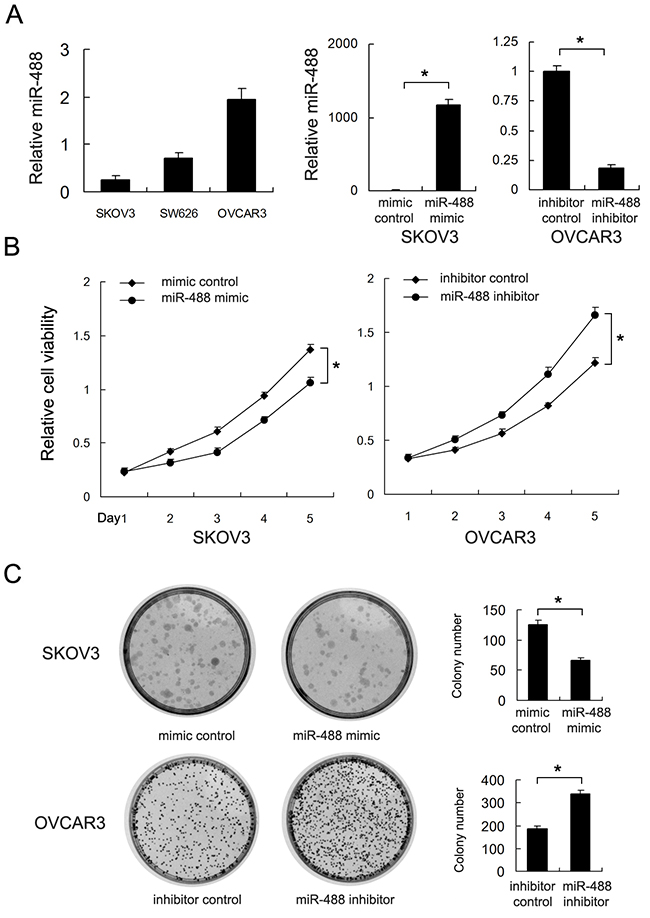 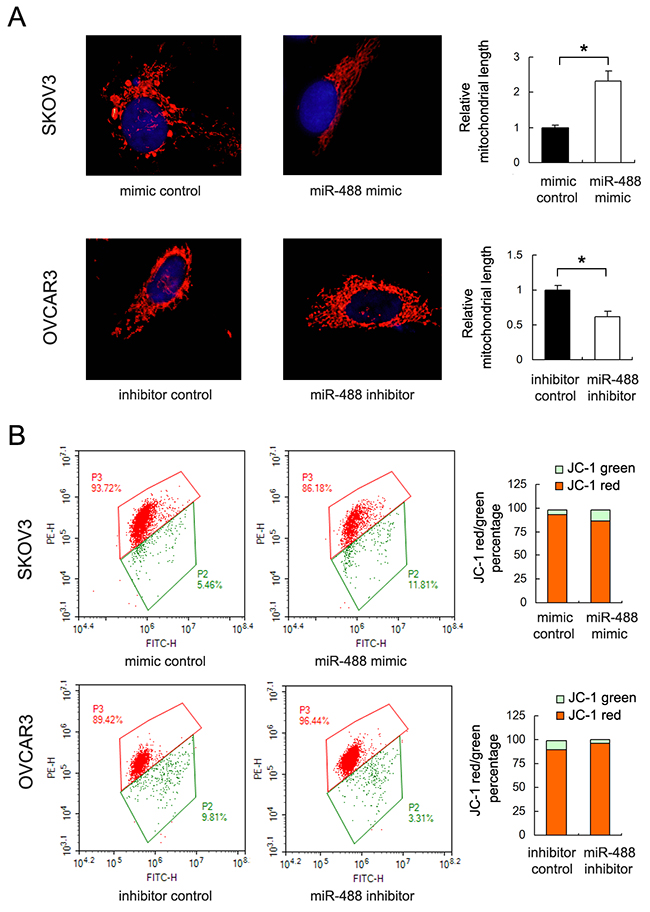 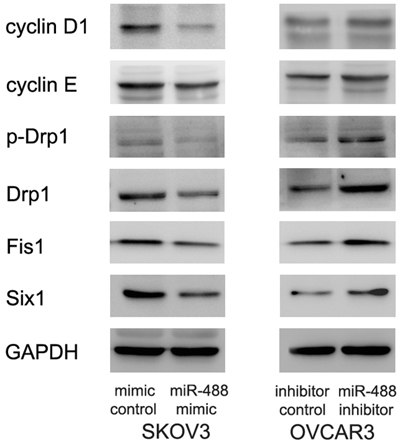 We screened and examined potential targets of miR-488 using TargetScan 7.0. We found that miR-488 mimic downregulated Six1 while miR-488 inhibitor increased Six1 expression at both protein and mRNA levels (p<0.05) (Figures 5&6A). 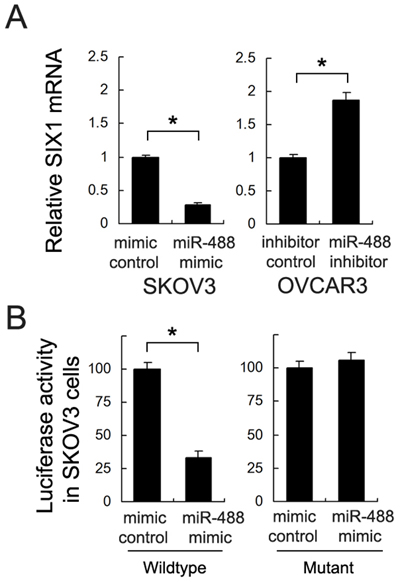 Figure 6: Six1 is a direct target of miR-488 in ovarian cancer cells. (A) miR-488 mimic inhibited mRNA expression of Six1 while miR-488 inhibitor upregulated the mRNA expression of Six1. (B) Luciferase reporter plasmid with wild-type and mutant binding site was transfected into SKOV3 cells with miR-488 mimic. When transfected with wild-type reporter, cells showed a downregulated luciferase activity with miR-488 mimic. When transfected with mutant site reporter, there was no significant change. *: p<0.05.

To validate the relationship between miR-488 and Six1, we used luciferase reporter assay. Luciferase reporter is designed to quantitatively evaluate miRNA activity by the insertion of miRNA target sites downstream of the firefly luciferase gene. Reduced firefly luciferase expression indicates the binding of introduced miRNAs to the cloned miRNA target sequence. Wild-type (CUUUCA) and mutant (C AAA CA) were cloned into reporter. miR-488 mimic downregulated reporter activity in SKOV3 cells after transfection of wild-type vector (p<0.05) (Figure 6B). We did not found significant changes in cells transfected with mutant vector, indicating miR-488 binds to Six1 3’-UTR and suppresses its expression. Furthermore, we checked the association between miR-488 and Six1 mRNA in 27 cases of serous ovarian cancers. A negative association was found between miR-488 and Six1 (Linear regression model, p<0.05, Figure 1C). 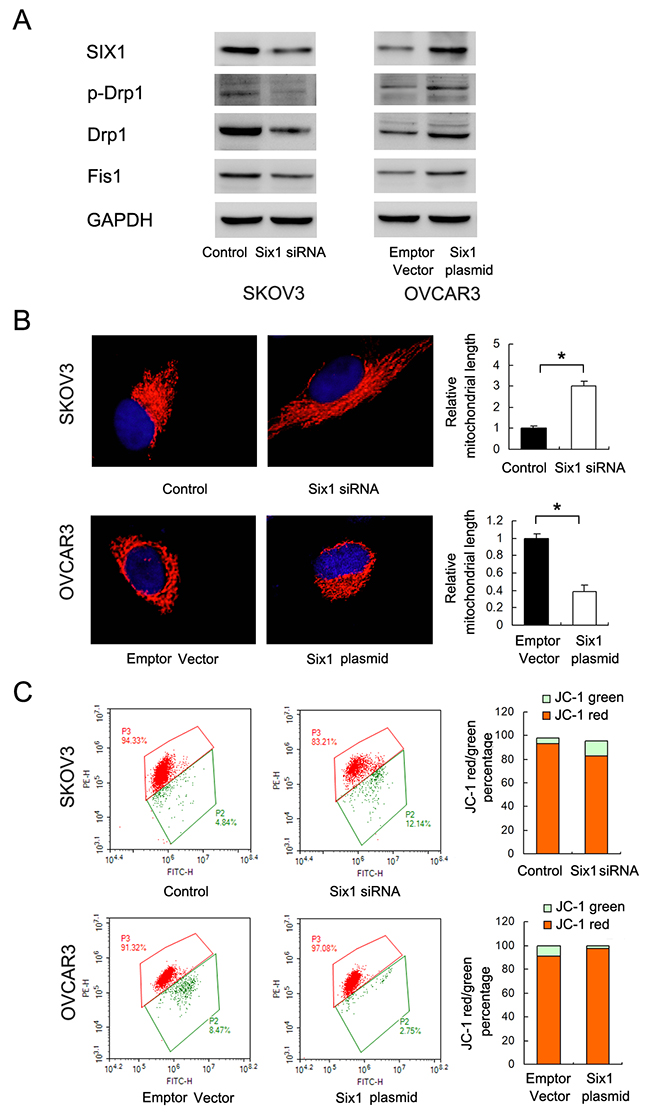 Six1 restores Drp1 signaling which is reduced by miR-488 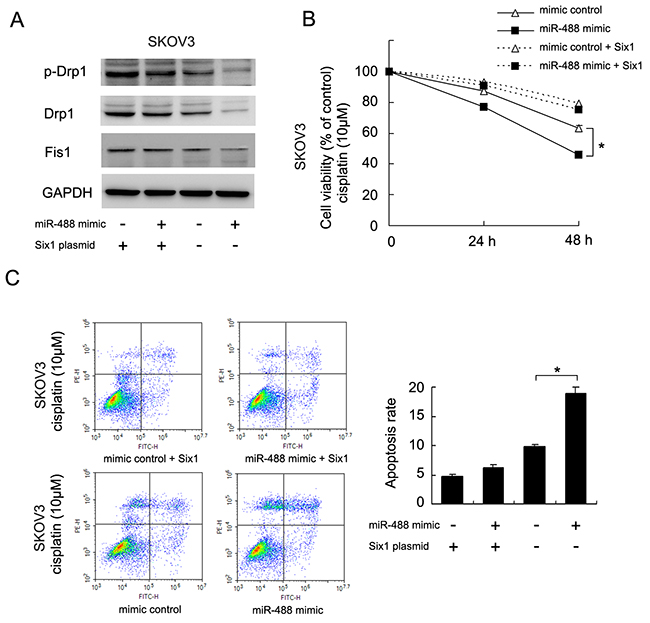 Growing evidences demonstrate the roles of miRNAs during ovarian carcinogenesis [18–20]. miR-488 was reported to function as a tumor suppressor in human prostate and gastric cancer by targeting androgen receptor and PAX6 [13, 15]. Nevertheless, expression pattern and roles of miR-488 in human ovarian cancer remains unclear. Our data showed that miR-488 expression was lower in ovarian cancer tissues compared with normal tissues, which was in accord with previous reports, indicating miR-488 is a potential tumor suppressor in ovarian cancers [15, 21].

TargetScan software was used to predict potential miR-488 target and Six1 was on the target list. Six1 is an oncoprotein which was overexpressed in ovarian cancer [33]. Our data demonstrated that miR-488 is a negative regulator of Six1 mRNA and protein. Binding of to Six13’-UTR was further confirmed by Luciferase reporter assay. In addition, we found a negative correlation between miR-488 and Six1 mRNA in ovarian cancer tissues, which further strengthen the link between them.

To further validate the role of Six1 in miR-488 induced chemosensitivity, we adopted Six1 plasmid to restore its expression in miR-488 treated SKOV3 cells. Six1 plasmid restored Drp1 and p-Drp1 status downregulated by miR-488. Six1 also restored chemoresistance in ovarian cancer cells, which was reduced by miR-488 mimic. Taken together, our data demonstrated miR-488 inhibits chemoresistance in ovarian cancer through downregulation of Six1.

In conclusion, this study demonstrated that miR-488 targets and downregulates Six1 and subsequently inhibits Drp1 signaling to regulate mitochondrial function and chemoresistance. Our results provide insight into a novel biomarker which predict ovarian cancer chemosensitivity.

This study was performed with the approval of the Ethics Committee and Institutional Review Board of Shengjing Hospital. All patients provided written informed consent for their data to be used in the study. Fresh ovarian cancer specimens and corresponding normal tissues were collected from patients from 2011 to 2015 with informed consent. Tissues were stored at -80°C before RNA extraction.

To perform colony formation, cells were seeded in culture dishes and cultured for 2 weeks. Then these plates were stained using Giemsa. We performed CCK8assay with Cell Counting Kit-8 kit (Dojindo) with a plate reader. 96 well cell plate was examined at 490 nm.

Annexin V/PI Kit (BD bioscience, USA) was used to examine apoptosis. After treatment, cells were harvested by 0.25% trypsin, washed with PBS and resuspended in binding buffer. Staining solution containing Annexin V/FITC and propidium iodide (PI) was added in cell suspension. After incubation in the dark for 30 minutes, rate of apoptosis was analyzed by ACEA flow cytometer.

SPSS 17 was used for analysis. t-test was used to compare data. p<0.05 was regarded as statistical significant.