Liver is the most frequent site for metastasis from colorectal cancer, with more than 50% of patients developing hepatic metastases during the course of the disease [1]. Liver resection, combined with modern chemotherapy, is considered the standard treatment for patients with resectable CRLM [2–3]. In selected patients, 5-year survival can approach 50% after resection of liver metastases [4]. However, recurrence occurs in 50%–75% of the patients after surgery [5–6], thus remaining a major problem. In particular, the correlation between a short time to recurrence and reduced survival has been demonstrated in published series [7–12]. Hence, active surveillance, earlier adjuvant chemotherapy and intensive chemotherapy regimen may be required for patients with high risk of early recurrence after liver resection for CRLM. Whereas, prognostic factors of early recurrence are not completely clear.

The treatment of recurrence after initial resection is highly varied, including salvage treatment like second surgery [13], percutaneous radiofrequency ablation (RFA) [14], and stereotactic body radiotherapy (SBRT) [15], systematic chemotherapy or a combination of these modalities. When technically feasible, patients with recurrence are always candidates for salvage treatment, in order to increase the chance of long-term survival [16]. However, the indication for salvage therapy of recurrent disease is quite ambiguous. The current treatment strategy is largely based on technical issue: whether the recurrent lesions are anatomically favorable for loco-regional treatment, while other clinicopathological factors are rarely concerned. Early recurrence is often regarded as a marker of aggressive tumor biology, whether salvage treatment could work effectively in patients with early recurrence is largely unknown.

Table 1: Clinicopathologic characteristics of patients with or without early recurrence 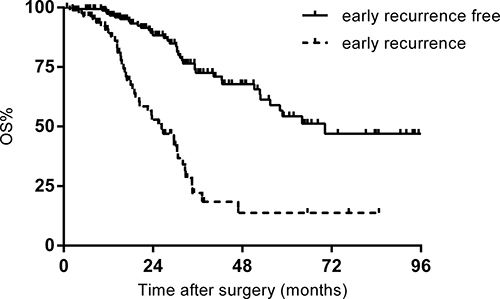 Figure 1: Overall survival (OS) of patients with and without early recurrence.

Based on the number of independent predictors each patient had, a scoring system for the prediction of early recurrence was generated (range 0–5 points), and the estimated risk of early recurrence according to the score is shown in Table 3. This scoring system showed a good discrimination ability (concordance index of 0.78, 95% CI = 0.74–0.82). Subgroup Analyses in patients with preoperative chemotherapy obtained consistent results (concordance index of 0.79, 95% CI = 0.73–0.87).

Prognostic factors for patients with recurrence

Numerous studies have confirmed the possibility of long-term survival after hepatectomy for CRLM. However, early recurrence after initial hepatectomy remains a major concern. In current study, 34.1% of patients experienced recurrence within 6 months after surgery. Five factors were identified to be associated with early recurrence after hepatectomy: preoperative CEA ≥ 30 ng/ml, primary tumor LVI, the number of metastases ≥ 4, R1 resection and initially unresectable disease. Moreover, when patients were stratified according to the number of risk factors, the efficacy of salvage treatment was significantly influenced.

The most common site of early recurrence was intrahepatic recurrence. Meanwhile, the number of metastases ≥ 4 and R1 resection were identified as independent predictors for early recurrence, suggesting that missed lesions and residual microscopic tumor cells left in the first hepatectomy both contribute to early intrahepatic recurrence. Resection margin status could also serve as a symbol of biological behavior of a tumor, because R0 resection is more likely to be achieved when patients have a favorable tumor biology. Moreover, the clinical significance of surgical margin is further complicated by preoperative chemotherapy. Indeed, several studies have demonstrated that tumor biology rather than R1 resection was independently associated with survival, and the long-term outcome benefit conferred by R0 resection disappeared in the setting of modern chemotherapy [21–23]. Since detailed intrahepatic recurrence pattern was not analyzed, it is not clear whether recurrence at the resection margin or new intrahepatic metastases, which respectively represent technical and biological reasons, account most for early recurrence in patients with positive margin. After all, R1 resection showed independent association with early recurrence while adjusting for other clinical and pathological factors, in the context of preoperative chemotherapy was given to 68.2% of the patients. Hence, microscopically negative margins should always be attempted when it is safe and feasible.

Resectability rate of CRLM has been increased to 10–40% with the development conversion chemotherapy [24–25]. Whereas, although the converted patients have a similar OS after surgery compared to patients with initially resectable disease, they tended to have a shorter disease free interval, which could be as short as 3.2 months [10, 26–27]. The current study reaffirms the finding, and further identified initial unresecbility as an independent factor for early recurrence, implying that these patients could benefit less from the hepatectomy. The correlation with early recurrence and initial unresectability may be attributed to delayed adjuvant chemotherapy due to higher incidence of postoperative complications, and higher R1 rates caused by more complex surgical procedure. Therefore, If patients with initially unresectable CRLM are present with other risk factors for early recurrence, they may benefit less from the conversion strategy. Surgical indication for initially unresectable CLM with these factor should be considered cautiously. Of cause, definition of unresectability is subjective and differs among doctors and hospitals. In our institution, a general definition of unresectability is applied and all controversial cases are discussed in MDT, thus a relatively standardized criteria is guaranteed.

Pathological factors of the primary tumor is recognized to help discern the secondary lesions. Among which, LVI has been demonstrated to be a poor prognostic factor for patients with CRLM after hepatectomy. Previous studies have confirmed that patients with LVI positive primary colorectal tumors had a unfavorable OS and PFS compared to those without LVI in their primary colorectal tumor [28–29]. Our results have also shown that patients with LVI were more likely to develop early recurrence, which reflects the importance of pathological details of primary tumor in assessing prognosis after liver resection. Moreover, 50–60% of patients with CRC develop metachronous liver metastases after radical resection of colorectal carcinoma, thus the pathological factors of the primary tumor may help surgeons discern a group of patients who will benefit more from hepatectomy.

Based on the five risk factors, a scoring system was created. This predictive model included both biological and technical factors, and may thus be useful for identifying patients with high risk for early recurrence. Such patients are appropriate for more close surveillance, but they may not be appropriate candidates for intensive treatment when recurrence occurs. As far as we know, our predictive model is the first for early recurrence after hepatectomy for CRLM. Although most patients in the study received preoperative chemotherapy that could affect PFS [30], subgroup analyses of patients who underwent preoperative chemotherapy showed a good discrimination ability. This individual prediction of the patient’s risk of early relapse may assist oncologists in deciding an optimal treatment strategy for individual patients with CRLM. The major drawback is that the scoring system has only been validated internally and further external validation is warranted. Besides, criteria for unresectability varied from institutions, which would unavoidably result in bias. This study has some other limitations. First, this is a retrospective study with a relatively small sample size. Second, protective effect of adjuvant chemotherapy was not considered in current study, because we aim to propose a algorithm based on tumor biology and surgery-related factors, in order to identify a group of patients for earlier and more intensive adjuvant chemotherapy to delay recurrence.

Consecutive patients who underwent surgery for CRLM at Department of hepatobiliary surgery, Cancer Hospital, Chinese Academy of Medical Sciences between January 1, 2007, and November 30, 2015, were identified from our prospective institutional database. Inclusion criteria were: (1) patients who underwent hepatectomy for curative intent; (2) histologically proven colorectal adenocarcinoma liver metastases; (3) a follow-up more than 6 months. Exclusion criteria were: (1) extrahepatic metastases detected on preoperative imaging or during surgery; (2) R2 resection; (3) combined with RFA; (4) postoperative deaths (noncancer-related 90-day mortality); (5) a history of prior hepatectomy for CRLM.

All patients were evaluated preoperatively, including CEA levels; abdominopelvic computed tomography (CT) and magnetic resonance imaging (MRI); and chest radiography or chest CT to determine the disease stage. Preoperative chemotherapy was recommended to patients with initially unresectable CRLM, or to patients with multiple high risk factors: synchronous metastases, ≥ 4 hepatic lesions, primary tumor invading nearby tissues/organs and imaged mesenteric nodal disease. The definitions of unresectability were as follows: multiple liver metastases that required resection of more than 70% of non-tumor liver for removal of all tumors, tumors invading all three hepatic veins, tumors invading both the left and right branches of the hepatic artery or portal vein, and unresectable extrahepatic metastases. Chemotherapy was composed of a combination of 5-fluorouracil/capecitabine and oxaliplatin/irinotecan with or without bevacizumab and cetuximab. Tumor response was assessed according to the Response Evaluation Criteria In Solid Tumors criteria (RECIST, version 1.1) every two cycles. All imaging studies were reviewed by at least two independent radiologists until the final conclusion was drawn. Surgery with curative intent was performed if hepatic lesions were considered treatable with hepatectomy. The decision to undertake surgery for controversial cases was reached by consensus of a multidisciplinary team (MDT) including surgeons, oncologists and radiologists.

During surgery, the peritoneal cavity was inspected to eliminate previously undetected extrahepatic disease. Manual liver palpation and intraoperative ultrasound was used to rule out occult lesions and confirm the number, size and location of the liver metastases. The principle of surgery was to remove all detectable lesions with a tumor-free margin. All specimens were subjected to histologic evaluation to confirm the pathological diagnosis, number and size of liver lesions, and the width of surgical margin. In case of multiple liver metastases, the diameter of the largest lesion was defined as the final size, and the closest margin was recorded. R1 resection was defined with a distance from the metastasis edge to the transection line of less than 1 mm.

After surgery, patients were followed up at regular intervals. Serum CEA and imaging studies were performed to detect any intrahepatic recurrence or distant metastases. The first follow-up occurred one month post-surgery, with subsequent ones every 3 months for up to 2 years, and every 6 months thereafter.

If tumor recurrence occurred and all recurrence sites were deemed treatable with salvage therapy, then active treatment was undertaken. Neither the number of metastases nor the recurrence site alone excluded any patients from salvage treatment. Otherwise, systematic chemotherapy was applied.

Continuous variables are expressed as median (range). Continuous and categorical variables were compared using Mann–Whitney U test and χ2 test respectively. Multivariate logistic regression analysis was performed by the backward elimination method to identify independent factors associated with early recurrence. The Hosmer-Lemeshow test was used to assess the fit of the logistic regression model. A scoring system that predict early recurrence was generated using all factors that had P < 0.05 according to the multivariate regression model. The discrimination ability of the scoring system was evaluated using Harrell’s concordance index. The internal validation of the discrimination ability of the scoring system was performed using the bootstrapping techniques. Survival analyses were done using the Kaplan-Meier method, with comparisons by means of the log rank test. Multivariate models were constructed for OS using the Cox proportional hazard method. Variables were included in each multivariate model if they achieved a P < 0.1 for significance on univariate analysis. P < 0.05 was considered to indicate statistical significance. Statistical analyses were performed using the SPSS (version 22, Armonk NV, USA) and R software (http://www.r-project.org).