In genitourinary system, bladder cancer (BC) is the most common and lethal malignant tumor, which most common type is bladder urothelial carcinoma (BUC). Long non-coding RNA (lncRNA) Taurine Up-Regulated 1 (TUG1) gene is high-expressed in several malignant tumors, including BC. In this study, over-expression of TUG1 was found in BUC tissues and cell line resistant to doxorubicin (Dox). Knockdown of TUG1 inhibited the Dox resistance and promoted the cytotoxicity induced by Dox in T24/Dox cells. TUG1 knockdown also depressed the Wnt/β-catenin pathway, and the activation the Wnt/β-catenin pathway partly reversed the inhibitory effects of TUG1 knockdown on Dox resistance in T24/Dox cells. In conclusion, up-regulation of lncRNA TUG1 was related with the poor response of BUC patients to Dox chemotherapy, knockdown of TUG1 inhibited the Dox resistance of BUC cells via Wnt/β-catenin pathway. These findings might assist in the discovery of novel potential diagnostic and therapeutic target for BUC, thereby improve the effects of clinical treatment in patients.

In genitourinary system, bladder cancer (BC) is the most common and lethal malignant tumor, which most common type is bladder urothelial carcinoma (BUC). Surgical operation is the preferred and key preference for BUC patients, systemic and intravesical chemotherapy may decrease BUC cell metastasis and improve patient survival [1]. Although tremendously chemotherapy strategies have been improved recently, but resistance to chemotherapeutics has severely limited the efficacies of these drugs in clinical BUC applications, the prognosis of BUC patients is still poor [2]. It is crucial to elucidate the mechanisms underlying BUC chemoresistance and identifying novel therapeutic targets will be crucial to further improvements in BUC patient prognosis.

Accumulating evidences showed that the long non-coding RNAs (lncRNAs) might play important roles in carcinogenesis [3, 4]. LncRNAs are a class of non-protein coding transcripts longer than 200 nucleotides and participated in the process of epigenetic regulation, transcriptional regulation, and posttranscriptional regulation [5–7]. With the development of bioinformatics and functional genomics studies, many lncRNAs were discovered reflecting disease progression and serving as a predictor of patient outcomes [8, 9].

Taurine Up-Regulated 1 (TUG1) gene, a novel lncRNA mapping to 22q12.2, was originally identified in retinal development by Young TL et al. at 2005 [10]. Recent literatures reported that TUG1 was high-expressed in several malignant tumors, including gastric cancer, colorectal cancer and pancreatic cancer, which indicated TUG1 acted as an oncogene in these tumors [11–15]. TUG1 was also up-regulated in BUC, and may be a prognostic biomarker for BUC [16, 17]. These founding suggested that TUG1 might be involved in genesis of BUC. Nevertheless, the functional roles and regulatory mechanisms of TUG1 in chemoresistance remain unknown, especially to Dox.

In this study, we emphasized the pivotal roles and regulatory mechanism of TUG1 on chemoresistance in BUC, which might helpful to improve the effects of clinical treatment in BUC.

Up-regulation of TUG1 was correlated with doxorubicin resistance of BUC 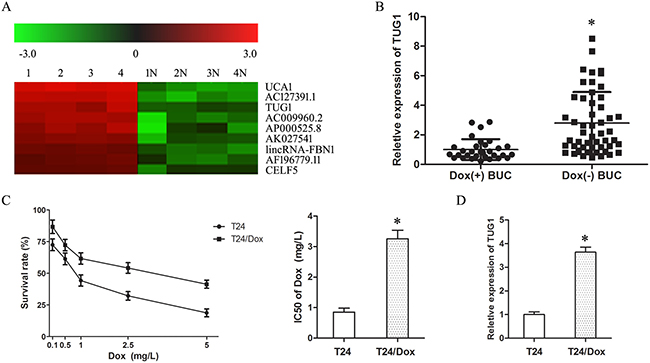 These results revealed that the up-regulation of TUG1 was related with the poor response of BUC patients to Dox chemotherapy, which provided initial evidence that TUG1 played a key role in the Dox resistance of BUC.

In order to validate the vital roles of TUG1 on Dox resistance, ss-TUG1 was transfected into T24/Dox cells to knockdown the expression of TUG1 (Figure 2A). 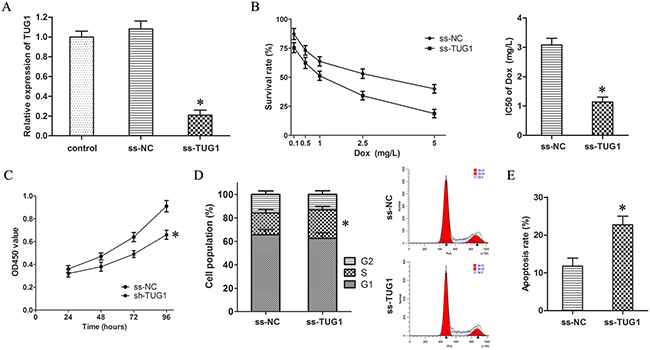 Thus, it was identified that knockdown of TUG1 inhibited the Dox resistance in T24/Dox cells.

To discuss the regulatory mechanism of TUG1 on Dox resistance in BUC, the data of microarray assay was analyzed by bioinformatics. Gene Ontology (GO) analysis of lncRNAs differentially expressed between Dox (−) and Dox (+) BUC tissues indicated the major enriched processes were cell cycle and apoptosis. And Kyoto Encyclopedia of Genes and Genomes (KEGG) pathway analysis showed the most enriched pathway was Wnt/β-catenin pathway. Therefore, Wnt/β-catenin pathway was chosen as targets to highlight the TUG1 associated Dox resistance in BUC.

Figure 3: Knockdown of TUG1 restrained Wnt/β-catenin pathway. (A) The co-expression patterns between TUG1 and β-catenin (CTNNB1) in BUC is searched using the online server ChIPBase. (B) The expression of β-catenin protein in T24/Dox cells. (C) The ratio of TOP/FOP values in T24/Dox cells examined by luciferase assay. *P < 0.05.

Together, the data demonstrated TUG1 knockdown restrained the activity of Wnt/β-catenin pathway.

The expression vector for β-catenin (pE-β-catenin) was transfected into T24/DR cells to activate Wnt/β-catenin signaling which restrained by knockdown of TUG1. Western blotting and TOP/FOP Flash luciferase reporter assays indicated the Wnt/β-catenin pathway was activated significantly (Figure 4A and 4B, P < 0.05). 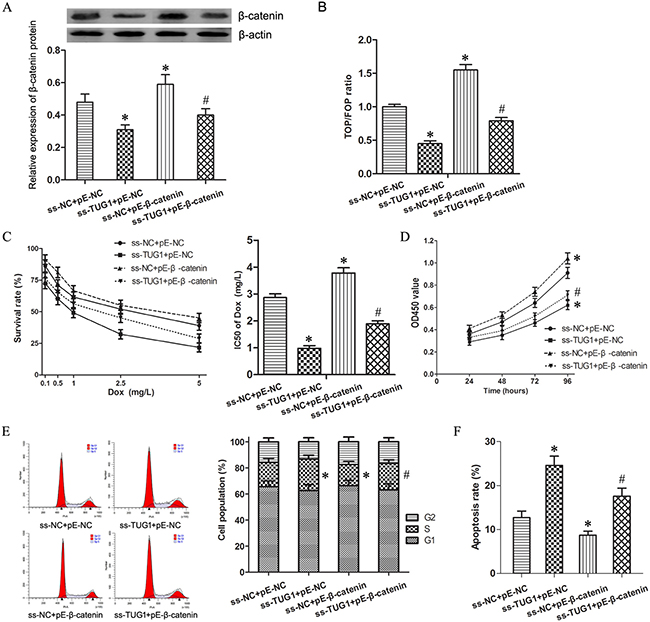 While combining use ss-TUG1 and pE-β-catenin, T24/Dox showed significantly increased Dox resistance when compared with ss-TUG1 group. The IC50 of Dox in T24/Dox cells was increased from 0.98 ± 0.16 mg/L to 1.89 ± 0.21 mg/L (Figure 4C, P < 0.05). In addition, under Dox treatment (0.5 mg/L), β-catenin enhancement promoted cell viability and cell division as well as suppressed cell apoptosis in T24/Dox cells (Figure 4D–4F, P < 0.05). However, ss-TUG1 and pE-β-catenin could not restore the Dox resistance to the original level of pE-β-catenin group.

Therefore, these results suggest that activation of Wnt/β-catenin signal pathway could partly restore the effecting on Dox resistance induced by TUG1 knockdown in T24/Dox cells.

For clinicians, chemotherapy is an effective approach to prevent metastasis and recrudescence of BUC. Dox is the one of the most common and effective agent used widely in intravesical and systemic chemotherapy for BUC. Dox belongs to anthracycline antibiotic, which can integrate with nucleus DNA and damage DNA structure to make apoptosis and cell growth arrest [18]. However, Dox resistance had also been a barrier leading to failure treatment.

Recently, some lncRNAs had been reported to participate in the genesis of chemoresistance in almost all malignant tumors, including BUC. For instance, lncARSR advanced the Dox resistance in hepatocellular carcinoma (HCC), and might be a potential prognostic biomarker and therapeutic target for HCC [19]; lncRNA HOTAIR depressed the Dox sensitivity in BUC [20].

Recent studies reported TUG1 was up-regulated in colorectal cancer resistant to methotrexate, knockdown of TUG1 re-sensitized the colorectal cancer cells to methotrexate [21]; high TUG1 expression was related to chemoresistance in esophageal squamous cell carcinoma to platinum combined with 5-fluorouracil or paclitaxel [22]. However, whether TUG1 is involved in BUC chemoresistance remains unknown, especially to Dox.

In conclusion, high-expression of lncRNA TUG1 was related with the poor response of BUC patients to Dox chemotherapy, knockdown of TUG1 inhibited Dox resistance of BUC via Wnt/β-catenin pathway. Our findings elucidate a potential mechanism of BUC chemoresistance, and indicate TUG1 might be a novel potential therapeutic target in BUC.

82 BUC specimens were gathered from the Department of Urinary surgery of Shengjing Hospital of China Medical University from Mar 2014 to Apr 2016 through cystoscope. All BUC patients were treated by chemotherapy with DOX, and the chemotherapy effects were evaluated in accordance with RECIST Response Evaluation Criteria. Patients resistant to DOX (−) were 51 cases, and patients sensitive to DOX (+) were 31 cases. This study was approved by the Ethics Committees of China Medical University, and the permissions of surgical patients were achieved.

According to manufacturer’s instructions, the T24/Dox cells were transfected with Lipofectamine 3000TM (Invitrogen, Foster City, CA, USA), and qRT-PCR was applied to examine the transfected efficiency. The stable cell line was established by treating with G418 (Sigma-Aldrich, St. Louis, MO, USA).

The cell cycle was analyzed by flow cytometry. In brief, 1 × 106 cells were harvested and following the cells were fixed in 70% cold ethanol, pelleted and washed once with PBS and re-suspended in propidium iodide (PI) solution (50 μg/mL) for 30 minutes in the dark. Then, the cell cycles were determined by the FACScan Canto II flow cytometry (Becton Dickinson, USA) within 1 hour and the results were analyzed through the Diva 8.0 software.

The double label flow cytometry was used to detect the apoptosis rate with Annexin V-FITC apoptosis detection kit (Biosea, Beijing, China) according to manufacturer’s instructions. 1 × 106 /ml cells were incubated with 2.5 μl FITC-Annexin V and 2.5 μl propridium iodide (PI) for 10 minutes in the dark at room temperature, and 400 μl binding buffer was added to terminate the reaction. The data was analyzed by FACSCanto II using the Diva 8.0 software (BD, USA). Cells at the right lower quadrant (FITC-Annexin V-positive and PI-negative) were defined as apoptosis.

Protein (30 μg) extracted from T24/Dox cells were subjected to 10 % sodium dodecyl sulfate-polyacrylamide gels electrophoresis (SDS-PAGE) and transferred to a 0.22 μm polyvinylidene difluoride (PVDF) membrane (Millipore, MA). The PVDF membrane was blocked and incubated with β-catenin antibodies (ab32572, Abcam, USA) at 4°C overnight. Then, the membrane was incubated with second antibody and treated with BeyoECL Plus reagent (Beyotime, Nanjing, China). The image was scanned and analyzed with Image J (National Institutes of Health, USA) by normalized to the inference gene of β-actin.

All data were showed as means ± SD of five independent experiments and analyzed with GraphPad Prism 5.0 (Graphpad Software, La Jolla, CA). The data were analyzed using Student’s t-test and one-way ANOVA. A P-value of less than 0.05 was considered to be statistically significant and indicated by (* and #).

2. Aragon-Ching JB. Challenges and advances in the diagnosis, biology, and treatment of urothelial upper tract and bladder carcinomas. Urol Oncol. 2017; 35:462–464.