Background: Anti-immune programmed death-ligand 1 (PD-L1) pathway is used by the tumor to overcome immune system and serves as immunotherapy target in various malignancies.

Aim: To investigate the expression of PD-L1 in vulvar squamous cell carcinoma (vSCC) and to assess it’s clinicopathological and prognostic significance.

PD-L1-positivity of cancer cells but not immune cells, was more frequently observed in p16-negative tumors (p=0.004). High-risk HPV-status did not correlate with the PD-L1 status of cancer and immune cells (p=1.000) and (p=1.000) respectively). Median follow up was 89.20 months (range 1.7-189.5). PD-L1 positivity of peritumoral immune cells was found to be an independent favorable prognostic factor for OS. Conclusion: This study highlights the importance of comprehensive PD-L1 assessment in both cancer and immune cells. PD-L1 expression on peritumoral immune cells seems to be an additional prognostic factor in vSCC patients and may influence the results by anti-PD-L1 treatment.

The immune microenvironment of vulvar squamous cell carcinoma (vSCC) has been studied intensively by our group [1–3] and the others [4]. Lack of prognostic significance of adaptive immune effectors and regulatory T cells described in these studies has indirectly suggested limited role for immunotherapy for vulvar cancer patients.

Recently, we have found that cancer immune surveillance as represented by tumor infiltrating lymphocytes (TILs) and tumor associated macrophages (TAMs) depends on p16INK4a expression regardless to high-risk HPV-DNA status [5] as various immune effectors contribute to improved clinical outcomes in patients with p16-positive and p16INK4a-negative tumors.

This suggests that not HPV infection itself, but p16INK4a overexpression, contributes to shaping of the tumor microenvironment and p16INK4a-status could stratify patients for separate immunotherapeutic approaches in vSCC.

PD-L1 (also called B7-H1 or CD274), which is expressed on many cancer and immune cells, plays an important part in blocking the ‘cancer immunity cycle’ [7] by binding programmed death-1 (PD-1) and B7.1 (CD80), both of which are negative regulators of T-lymphocyte activation [6].

This study aimed to evaluate PD-L1 expression in vSCC tumors and to look for the correlation of this biomarker with clinical and pathological features of vSCC patients including TILs, TAMs as well as p16INK4a and high risk (hr) DNA-HPV status in the primary tumor. 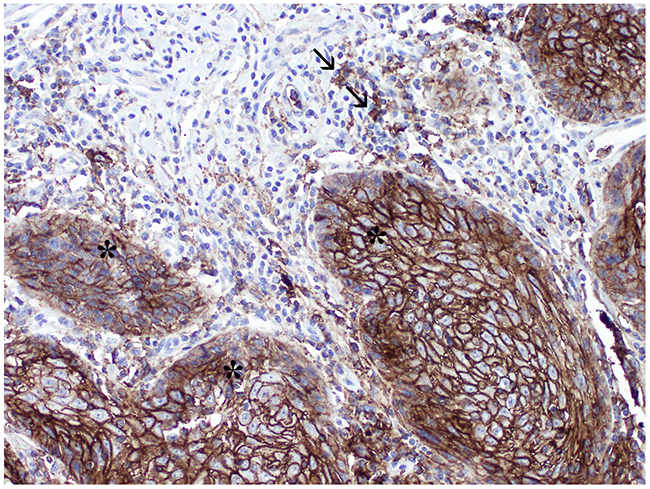 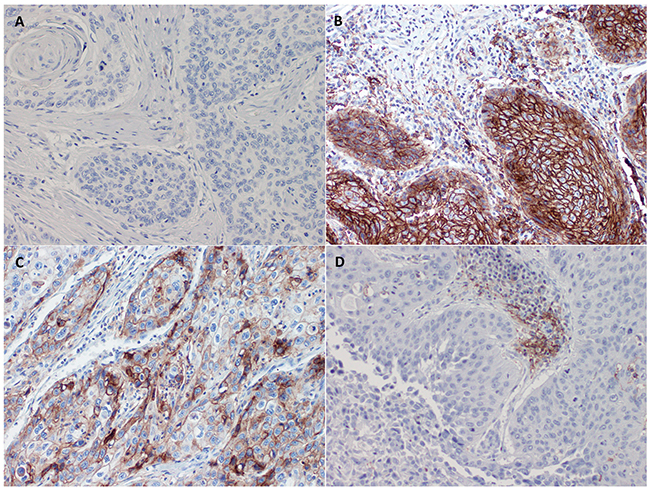 IC-PD-L1-positivity of vSCC was correlated only with higher intraepithelial infiltration of FOXP3+ cells (p=0.037) (Table 1).

Lack of difference in IC-PD-L1–positivity was observed in cases with mutually excluding p16 and (hr)HPV-DNA status (p=1.00 and p=1.00, respectively).

Table 2: Association between PD-L1-positivity and clinicopathological features of vSCC patients

CC-PD-L1-positivity did not influence prognosis of vSCC patients (p=0.164) (Figure 3A). 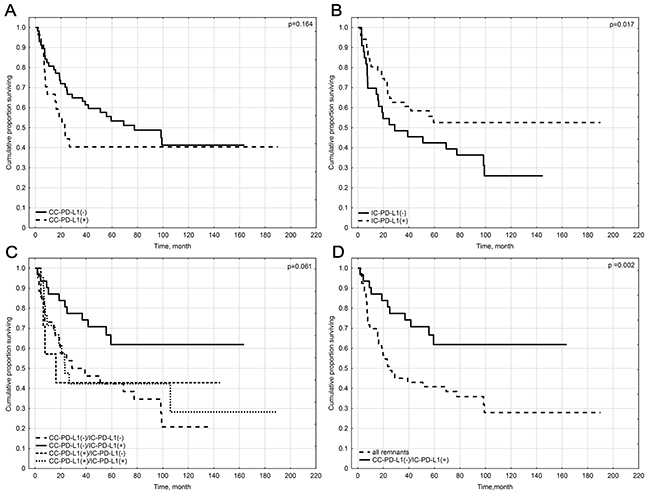 Patients with primary tumors positive for IC-PD-L1 expression had improved OS compared to IC-PD-L1 negative ones (p= 0.017) (Figure 3B).

Survival analyses comparing all variants of PD-L1 expression indicated the group of patients with CC-PD-L1(-)/IC-PD-L1(+) tumors presented trend towards significantly better prognosis (p=0.061) (Figure 3C). When this group was further compared to the rest of cohort taken together it revealed significantly best outcome (p=0.002) (Figure 3D).

Additionally, impact of PD-L1-positivity on survival was assessed in groups of patients with different p16INK4a status.

CC-PD-L1-positivity did not influence the overall survival in cases having tumors p16INK4a-negative and p16INK4a-positive (p=0.3763 and p=0.1639 respectively). 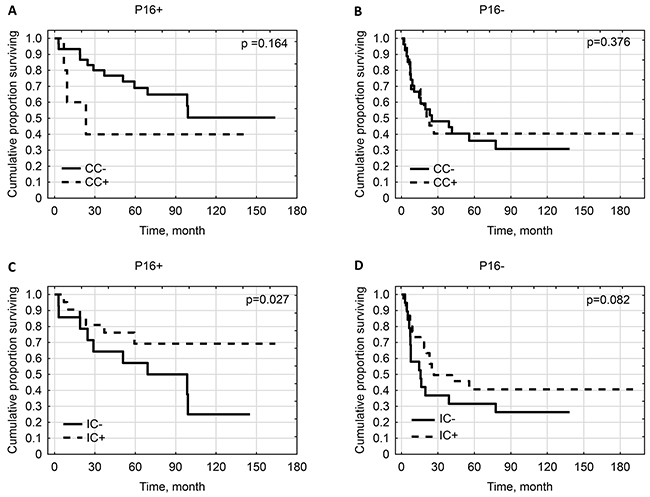 Univariate and multivariate analyses revealed that IC-PD-L1-positivity was an independent prognostic factor for OS in vSCC patients (Tables 3 and 4).

In the present study, we comprehensively evaluated PD-L1 expression on the whole sections of tumor tissue showing that this biomarker is present both on cancer and immune cells. In our opinion assessment of macrodissected cancer tissue is superior than evaluation of tumor microarrays (TMAs). Compared with the whole tumor sections, tumor microarrays (TMAs) may be less representative, especially while assessing the biomarkers expressed in the tumor infiltrating immune cells [8].

PD-L1 positivity was defined as ≥5% of cells regardless the intensity of membranous staining. This is consistent with several publications analyzing this biomarker within other malignancies [9–12]. An appropriate cutoff value in validating the positive expression of PD-L1 remains contentious. Subgroup analysis with different cutoff values has shown that there was a contradictory trend when using the cutoff value of `5%’ or `1%’ in evaluating the correlations of PD-L1 positive expression with survival of cancer patients [8]. Therefore, a combined classification of cutoff values for PD-L1 assessment in CCs and ICs seems feasible and reasonable.

PD-L1-positivity of immune cells was more frequently observed within vSCC than PD-L1-positivity of cancer cells (60.7% vs. 32.1%). We found only two publications dealing with PD-L1 in vulvar cancer [13, 14]. None of these papers provided data neither on patterns of PD-L1 staining within primary tumor nor on frequency of PD-L1 expression in vSCC.

The mechanism by which CC-PD-L1 surface expression is induced is quite ambiguous and includes either immune cell and cancer cells. Besides adaptive PD-L1 up-regulation in an inflammatory cytokine milieu caused by TAMs and/or Interferon-γ [16–18], cancers can have innate potential to drive PD-L1 expression by oncogene. Several genetic alterations were associated with constitutive PD-L1 up-regulation, like PTEN loss or NPM/ALK [19, 20]. Amplification at 9p24.1, where PD-L1 resides, has been associated with PD-L1 up-regulation in oral squamous cell carcinoma [21] and non-small cell lung cancer [22]. Activation of PI3K pathway by PTEN loss in both breast cancers [23] and glioblastomas [19] has been shown to induce PD-L1 expression. These events have long been known to result in the expression of neoantigens, differentiation antigens, or cancer testis antigens, which can lead to presentation of peptides bound to major histocompatibility class I molecules on the surface of cancer cells, distinguishing them from their normal counterparts [7]. This could partially explain, observed in this study, correlation between CC-PD-L1-postivity and higher intraepithelial immune infiltration as represented by CD4+, CD8+, FOXP3+ T cells. Additionally, CC-PD-L1-positivity was more frequently observed among p16Ink4a-negative tumors which were found to be more infiltrated by TILs and TAMs [5]. Lack of prognostic effect of interaction between PD-L1 on cancer cells and PD-1 on TILs can reflect state of equilibrium between host immune response and cancer tissue, thus not influencing patient’s overall survival.

Interestingly, PD-L1-positivity of immune cells was found to be independent prognostic factor for overall survival of vSCC patients. Similar findings were published for head and neck cancer patients suggesting that comprehensive assessment of PD-L1 expression could bring an information for more precise usage check point inhibitors [9]. Recent meta-analysis of prognostic value of PD-L1 expression on tumor infiltrating immune cells, including 3674 patients with different types of cancers, confirmed that IC-PD-L1 is related to a better survival of cancer patients [8].

Several previous reports have shown that PD-L1 expression is a negative prognostic factor in several cancer types, including renal, colorectal, and lung cancers [24–26], but others have reported that PD-L1 is a favorable prognostic factor in metastatic melanomas, NSCLC, and Merkel cell carcinomas [27–29]. In the majority of these studies, the expression of PD-L1 in tumor sections has been evaluated without exact discrimination between IC and TC.

Notably, we have found that IC-PD-L1-positivity improves survival in entire cohort, but when the patients were subdivided into two groups based on p16INK4a-status of the primary tumor, this protective effect was observed only for p16INK4a-positive cases. (hr)HPV-DNA status did not influenced PD-L1-positivity either on cancer and immune cells which supports our previous results suggesting lack of clinicopathological significance of HPV-DNA positivity within vSCC [5, 15].

When we separately analyzed PD-L1-positivity on CC and IC, which was categorized into four variants of vSCC cases, we found that patients with CC-PD-L1(-)/IC-PD-L1(+) tumors had significantly best outcome.

Few hypotheses could explain this paradoxical favorable prognosis of PD-L1 expression on ICs. IC-PD-L1 expression could be driven by adaptive mechanisms such as exogenous inflammation mediated immune attack and then reflected pre-existing immunity [9, 30]. IC-PD-L1-positivity could have stronger relations with cancer immune response, and probably depends on tumor microenvironments. Such favorable profile of immune microenvironments was described for PD-L1 expression in pulmonary squamous cell carcinoma [12].

However, with the exception of PD-L1 expression all other data were retrieved from our previous studies, originality of current report is supported by completely new study project and design. Immunohistochemical PD-L1 expression has never been analyzed before within vulvar cancer tissue. By analyzing all available data for this cohort, we were able to present in single publication, not only patterns of expression and prognostic significance of this biomarker but also associations with TILs, TAMs, p16INK4a and (hr)HPV-DNA status. Such correlations have never been described before.

This study provides a new insight into immune surveillance on vSCC as for the first time demonstrates that although PD-L1 could mediate the occurrence of cancer immune escape, it also indicates an effective immune response.

Immunohistochemical staining for PD-L1 was performed as follows. Four-micron-thick serial sections were cut, placed onto slides, and deparaffinized. For epitope retrieval, slides were immersed in Target Retrieval Solution (pH 6.1; Dako Cytomation, Denmark) and heated in a pressure cooker. Then, they were incubated for 90 min with primary antibody (1:50 dilution, clone 22C3, cat. nr. M3653). The reaction was visualized using the EnVision FLEX (DAKO). Appropriate positive (tonsil) and negative (primary antibody replaced with normal mouse IgG at an appropriate dilution) controls were included in each staining. Immunohistochemistry results were evaluated by two independent pathologists blind to the clinical data.

PD-L1 cell expression was referred as positive if membranous staining was identified and showed a continuous honeycomb pattern. Cytoplasmic staining of PD-L1 was disregarded. Expression of PD-L1was categorized into two groups according to the percentage of PD-L1-positive cells. PD-L1 positivity was defined as ≥5% of cells regardless to intensity of membranous staining [9–12].

Immunohistochemical staining for other antibodies: p16, CD8, CD4, FOXP3, CD68, CD56, GZB with evaluation and classification of TILs and p16INK4a status was previously described for this cohort by our group [5].

Tissue dissection and DNA preparation as well as mucosal HPV DNA amplification and genotyping were detailed for this cohort in our other recent study [15].

The statistical analysis was performed using the Fisher’s exact probability test. The difference between numerical variables was verified by Mann-Whitney U test.

Overall survival curves were estimated by the Kaplan–Meier method and compared by the two-sided Fox test. Univariate and multivariate analysis was performed using Cox regression model. p values <0.05 were regarded as significant in all analyses.

All analyses were performed using the statistical software

PD-L1 expression on IC, not on CC, is independent predictor of favorable OS in surgically treated vSCC patients. Assessment of the expression of immune-related molecules in whole tissue section slides could produce evidence relevant to the appropriateness of treatment via immune checkpoint blockade.

Moreover, our findings highlight the importance of comprehensive assessment of both TC and IC in vSCC and suggest that usage of antibodies directed against PD-L1-pathway seems to be favorable for subjects having tumors negative for PD-L1 peritumoral immune cells. Thus, incorporating peritumoral immune cells into the classification of PD-L1 expression seems to be necessary to select the beneficial vSCC patients for anti-PD-L1 treatment.