Ovarian cancer threatens women’s health worldwide as a lethal disease that is challenging to diagnose in early stages [1, 2]. Although progress has been made in diagnostics and treatments of ovarian cancer, the prognosis of ovarian cancer patients is far from optimistic [2, 3]. The International Federation of Gynecology and Obstetrics (FIGO) stage, histotype and grade of differentiation are recognized as classical prognostic factors, but they cannot accurately predict the prognosis of ovarian cancer [4, 5]. However, studies have proved that many biomarkers are involved in the progression of ovarian cancer [6], identification and validation of prognostic factors can complement well-established clinical histopathology analysis with the aim of improving future treatments [7]. 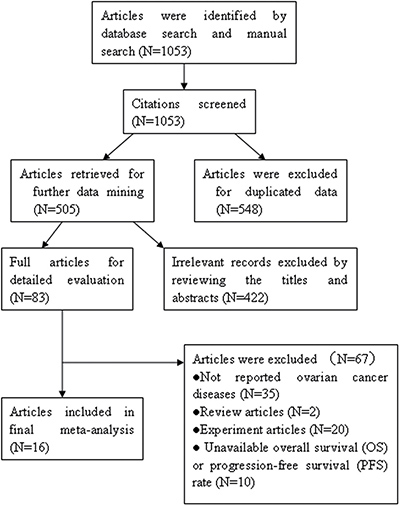 Figure 1: The flow diagram of retrieval in this study.

The main characteristics of the eligible studies are documented in Table 1. Of the 16 articles published from 1997 to 2017, thirteen articles were high-quality studies (NOS scores ≥ 7.0). Seven studies presented the OS and PFS, while nine studies present OS only. The level of E-cadherin expression in ovarian cancer tissues was frequently detected by immunohistochemistry (IHC). The hazard ratio (HR) value was obtained directly or from survival curves of the studies. 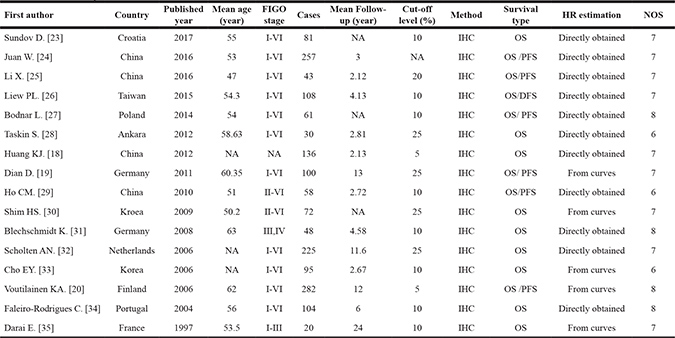 Influence of reduced E-cadherin expression on OS and PFS 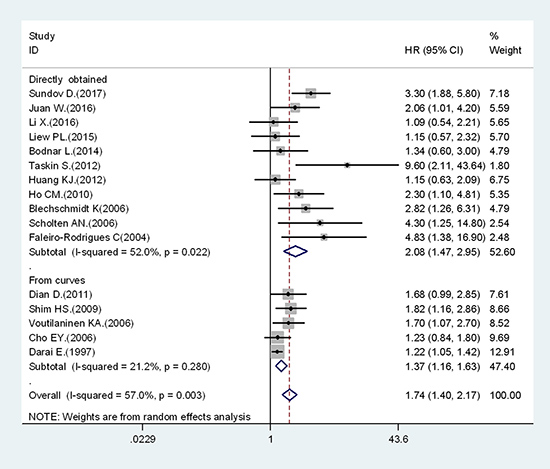 Table 2: The pooled data on overall survival of meta-analysis 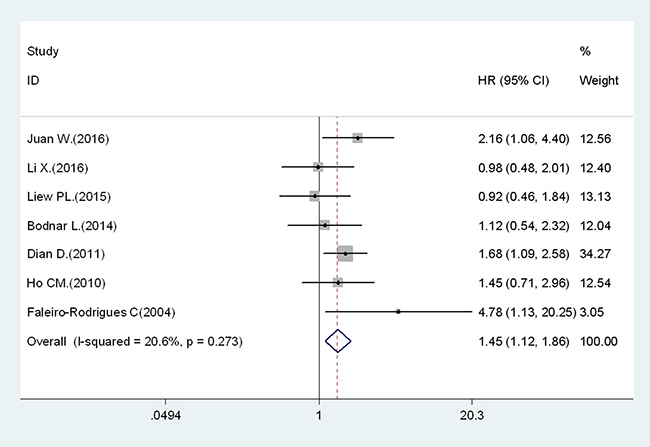 Figure 3: Results of association between decreased expression of E-cadherin and PFS.

Table 3: Associations between decreased expression of E-cadherin and clinicopathological features

Sensitivity analysis was conducted by sequential omission of each article to evaluate stability concerning OS and PFS. Exclusion of any single study did not alter the pooled HR estimation, which indicated that our results were robust (Figure 4).

Figure 4: Sensitivity analysis for OS (A) and PFS (B).

Both Funnel plot and Egger’s tests were used to evaluate the publication bias of included articles. Our results suggested that there was potential asymmetry in the studies on the association between reduced expression of E-cadherin and OS (p Egger = 0.002), so a trim-and-fill analysis was conducted. As shown in Figure 5A, after incorporation of six additional studies, the funnel plots were symmetrical, and E-cadherin low-expression was related to poor OS (corrected HR = 1.37, 95% CI: 1.08–1.74). Figure 5B shows that all articles lay inside the 95% CIs, with an even distribution around the vertical. Egger’s tests also suggested no significant publication bias (p Egger = 0.70).

Figure 5: Funnel plot of publication bias for OS (A) and PFS (B).

To date, there is no reliable clinical predictor for ovarian cancer, but the decreased expression of E-cadherin has been reported as an important event in ovarian cancer invasion and metastasis. E-cadherin belongs to the calcium-dependent adhesion molecule protein family and is mainly distributed in the epithelial tissue [36]. The intact structure of normal ovarian surface epithelium is dependent on N-cadherin, while E-cadherin is hardly expressed. Compared with well-differentiated epithelial carcinoma the expression of E-cadherin is usually decreased or absent in poorly-differentiated ovarian carcinoma. Previous studies demonstrated that loss of E-cadherin was the most important hallmark of epithelial–mesenchymal transition, which is implicated in the dissemination, migration, and invasion of cancer cells [37, 38]. The loss of E-cadherin expression also has an inseparable association with chemotherapy resistance in cancer cells [39] and can cause tumor cells to present apparent properties of cancer stem cells [40]. However, Darai et al. demonstrated that decreased expression of E-cadherin was uncorrelated with cancer type, pathological grade and tumor size [35]. Point mutation and partial deletion of E-cadherin gene can also cause loss of cell adhesion while tyrosine phosphorylation in the E-cadherin-beta catenin complex can inhibit the function of E-cadherin without changing its expression. Further mechanistic research is warranted, these studies support our hypothesis that decreased of expression E-cadherin is a promising prognosis factor of survival in ovarian cancer.

Despite the highlights mentioned above, there are still several limitations in our meta-analysis. First of all, the sources of primary antibody and concentration of antibody used in each study varied, which could influence IHC sensitivity. Secondly, the reliability of HR obtained from available data or Kaplan–Meier curves could be affected by inaccuracies in the calculation of censored data. Thirdly, there was no uniform scoring criteria to define the level of E-cadherin expression. Also, cut-off levels for reduced E-cadherin expression varied from 5% to 25% without evaluation standards. Finally, significant heterogeneity existed in our study. Although subgroup analyses were conducted, the results do not completely explain the observed heterogeneity.

This meta-analysis was performed in accordance with the Preferred Reporting Items for Systematic Reviews and Meta-Analysis (PRISMA) guidelines [41]. We conducted a search using PubMed, EMBASE and Cochrane Library databases for original studies that evaluated the prognostic value of decreased E-cadherin expression in ovarian cancer. The last search was conducted on March 20, 2017. The search keywords were as follows: “ovarian”, “neoplasm”, “tumor”, “cancer”, “E-cadherin”, “E-CAD”, “CDH1”, “cadherin-1”, “prognostic factor”, and “survival” . Furthermore, the reference lists of related review articles were screened. This meta-analysis was conducted based on previously published articles. Therefore, ethical approval and patient consent were not required.

Articles were considered eligible if they met the following criteria: (1) patients diagnosed with ovarian cancer using pathological and histological examinations; (2) the level of E-cadherin expression was detected in tumor tissues; (3) original full articles published in English; and (4) articles reported hazard ratio (HR) value and 95% confidence intervals (CIs) directly or calculated from demographic data or survival curves. Studies with more details and larger sample sizes were only selected if duplicate data from other articles occurred. Reviews, letters, conference abstracts, and comments were excluded.

The Newcastle-Ottawa quality assessment scale (NOS) was used to evaluate the quality of included studies by two independent investigators. Three perspectives (selection, comparability, and outcomes) were assessed in accordance with NOS. The quality scores of articles ranged from 0 to 9.0: scores ≥ 7.0 indicate high quality.

Stata Version 12.0 (Stata Corporation, College Station, TX, USA) was used for statistical analysis. HR with 95%CIs was used to evaluate the prognostic value of decreased E-cadherin expression in ovarian cancer. HR estimation for OS and PFS were directly obtained in some articles. For the studies displaying survival rates with p values from log-rank tests or Kaplan–Meier survival curves, HR could also be extrapolated using the method of Parmar and Tierney [42]. The Chi-square-based Q test and I² were applied as the assessment of heterogeneity across the studies. An I² < 50% and p > 0.05 were considered to be homogeneity, in which case the fixed-effect model was used for analysis. If severe heterogeneity was present at I² > 50% or p < 0.05, the random-effect model was used. Subgroup analysis and meta-regression were conducted to explore the source of the heterogeneity across the studies [43]. Visual inspection of the funnel plot and Egger’s test were done to evaluate the publication bias (p < 0.05 was statistically significant) [44, 45]. Sensitivity analysis was carried out to evaluate the robustness of the pooled results by sequential omission of individual studies. If univariate and multivariate analyses were both obtainable, the latter was chosen.

All of the authors have declared that no conflicts of interest exist.

19. Dian D, Bruning A, Mylonas I. E-cadherin as a prognostic marker in human serous carcinomas of the ovary: an immunohistochemical analysis. Arch Gynecol Obstet. 2011; 284:437–443.