Impact of socioeconomic status on survival of colorectal cancer patients

Socioeconomic status (SES) has an impact on the survival of various cancers, but it has not been fully understood in colorectal cancer (CRC).The Surveillance, Epidemiology and End Results database was adopted to detect the role of SES in the survival outcomes of CRC. A total of 184,322 eligible patients were included and SES status was analyzed. The multivariable analysis showed that Non-Hispanic Black (HR, 1.20; 95% CI, 1.15–1.24), being widowed (HR, 1.04; 95% CI, 1.01–1.07), any Medicaid (HR, 1.36; 95% CI, 1.33–1.39) and the lowest education level group patients had relative poorer prognosis. Besides, sex, tumor location, age, differentiation level and American Joint Committee on Cancer stage also had significant effects on overall survival of CRC. The individuals were further divided into five groups according to the number of survival-adverse factors. All of the four groups containing adverse factors showed impaired survival outcomes compared with the group containing no adverse factor.

Colorectal cancer (CRC) is the third most common malignancy in the United States, with 135,430 new cases and 50,260 deaths expected in 2017 [1]. The survival of patients with CRC have improved substantially due to the development of operation skills, chemotherapy drugs, immune treatment and early screening methods including timely colonoscopy examination, blood and fecal test and CT scan, etc. However, the survival rate of patients with CRC has changed little over the past 10 years.

The outcome of CRC is determined by various factors, including American Joint Committee on Cancer AJCC staging, tumor location, and neoadjuvant/adjuvant chemotherapy. Besides, socioeconomic status (SES) is also an important prognosis factor of CRC. Previous data indicated that married individuals possess better prognosis for many major causes of death compared with those who are single, separated, widowed, or divorced [2–4]. In consider of high complexity, length of duration, high cost of cancer-related therapies and the complicated role of SES in CRC survival, we hypothesized that SES factors, including insurance status, marital status, income, and educational level, may contribute to the overall survival (OS) observed in patients with colorectal cancer.

In this study, we used data from the Surveillance, Epidemiology and End Results (SEER) diagnosed between 2007 and 2013 to investigate the impact of SES on OS of CRC in detail.

Table 1: Characteristics of patients with CRC at the time of diagnosis in the US SEER, 2007 to 2012

Impact of socioeconomic status on survival

Table 2: Factors associated with OS of patients with CRC at the time of diagnosis in the US SEER, 2007 to 2012 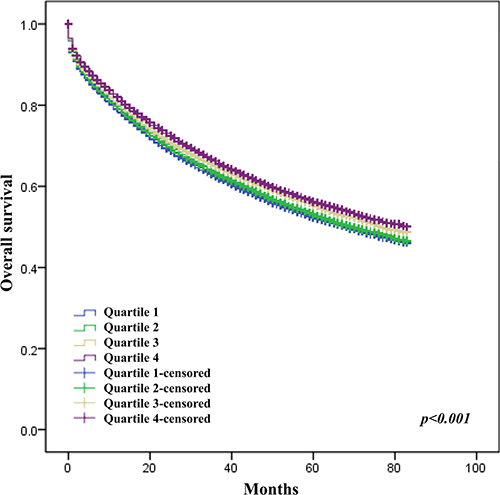 Figure 1: Effect of education level on survival of CRC patients. 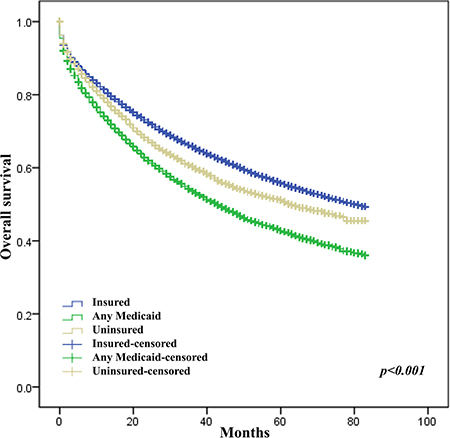 Figure 2: Effect of insurance on survival of CRC patients. 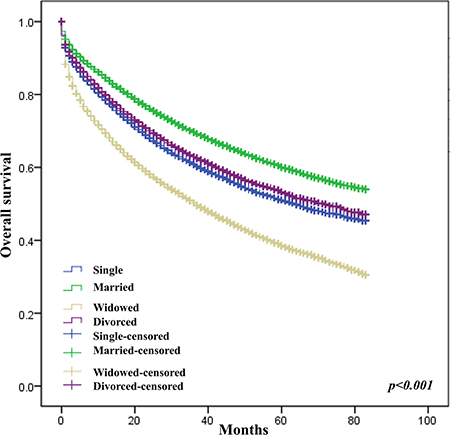 Figure 3: Effect of marital status on survival of CRC patients. 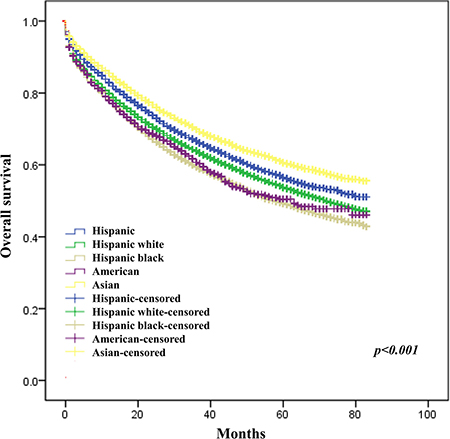 Figure 4: Effect of race on survival of CRC patients.

To validate the impact of SES on CRC survival, we divided these individuals into five groups according to the number of survival-adverse factors. The cumulative effect of SES factors associated with shorter survival in the multivariable analysis (ie, marital status other than married, insurance status other than “insured,” race other than Non-Hispanic Black, and residence in a county within the lowest 1 quartile of education) was shown in Figure 5. 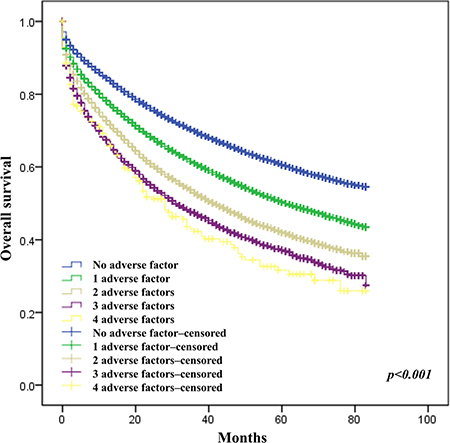 Figure 5: Survival according to the number of adverse SES factors: being widowed, uninsured, Non-Hispanic Black or lowest education level. 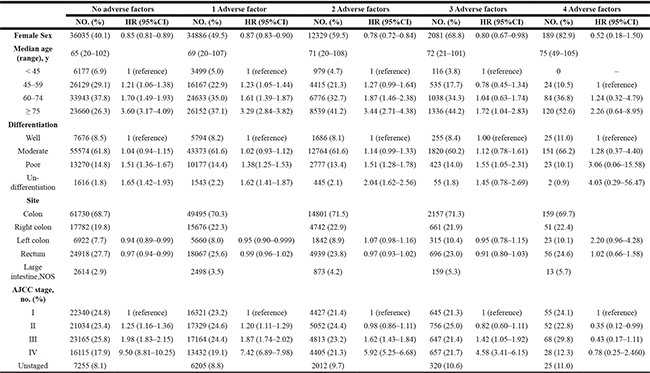 Furthermore, we evaluated the effect of female sex, age, differentiation level, tumor site (right colon vs left colon, rectum vs colon) and AJCC staging on survival of colorectal cancer in the five groups. The data showed that sex, age, differentiation level, and AJCC staging still exert significant effect on the survival of CRC patients in these groups except in the four-adverse-factor group.

As far as we know, the current research is the largest study to date that evaluates the impact of SES factors on the survival of CRC patients. Our data show that Non-Hispanic Black, being single, divorced or widowed, being uninsured or Medicaid, county-level income are related with an increased risk of death after adjusting for confounding factors including sex, age, SEER registry.

Many studies have detected the relationship between marital status and survival of cancers including CRC [5]. In thyroid cancer [6], gastric cancer [2], pancreatic cancer [3] and colorectal cancer [4], unmarried patients showed poorer prognosis compared with married patients. The reason that marital status is associated with cancer survival is complicated. Unmarried patients might tend to be more depressed and anxious and at higher nonadherence with prescribed treatments than married individuals [7, 8]. The negative emotions impair immune system function and thus may increase the mortality [9]. Aging itself is an adverse prognostic factor in CRC as shown in our result and other studies [10, 11] considering that aging impaired immune system, increased oxidative stress, shortening of telomeres, accumulation of senescent cells [12]. The widowed group contained a very high proportion of elderly patients (data not shown), which might result in the poor survival in this group.

Our study found that the insured patients have the best overall survival compared with uninsured and Medicaid patients. A recent study showed that Medicaid or uninsured status was associated with decreased diagnosis rates of nonpalpable prostate cancer and increased conservative management [13], thus impaired the survival of patients. CRC screening should begin at 50 years of age as it has been shown that screening adults aged 50–75 years reduces CRC mortality. Screening tests for CRC include stool-based tests such as fecal immunochemical test and guaiac fecal occult blood test and direct visualization tests including colonoscopy, CT colonoscopy and flexible sigmoidoscopy [14, 15]. Delayed cancer screen may also affect the survival of cancer patients. Uninsured and Medicaid-insured cancer patients have been shown to present with more advanced disease, less often receive cancer-directed therapy and suffer higher rates of mortality than those with private insurance [16]. For CRC, lack of insurance is associated with an elevated risk of late-stage diagnosis and a decreased likelihood of undergoing screening and receiving treatment following a diagnosis [17]. What’s more, in a 2011 survey, nearly one third of US physicians were unwilling to accept new patients with Medicaid insurance. It might cause inappropriate treatment for those Medicaid cancer patients [18]. Until ways are found to provide health insurance to all citizens, it seems likely that the uninsured will continue to suffer poor health outcomes.

We found that the Non-Hispanic Black patients have the worst prognosis compared with the other races. Our findings are consistent with the previous studies. Actually, a number of researches have suggested that the higher mortality rate of Black colorectal cancer patients might be in part due to more invasive tumors and more advanced stage [19–21], treatment strategies variance [22–25], chemotherapy resistance [26], and screening and post-surgery surveillance. Besides, some studies highlighted that racial differences in CRC incidence and mortality could be attributed more to differences in use of health-care than biological disparities [27].

Our study had some limitations. Firstly, the lifestyle information, comorbidities, screening and surveillance tests, or receipt of chemotherapy are not included in SEER database. Secondly, the insurance status recorded at the time of diagnosis could have changed over the follow-up period. Thirdly, some cases are not included in the cohort which may affect the generalizability to the population. Moreover, we were not able to retrieve individual-level SES factors from the SEER Limited-Use data. Census county-level measures are imperfect indicators of individual-level SES [28], and accordingly, our results may be somewhat biased by residual confounding. Lastly, some unknown or unidentified confounders could also impact the analysis.

Despite these potential limitations, our data confirmed that unmarried, Medicaid, lower education level and Non-Hispanic Black CRC patients are at a greater risk of mortality. The physicians, government and health care systems should provide specific cares and interventions for these patients to improve the survival of these patients.

Using the SEER-stat software (SEER*Stat 8.3.2), we selected patients that were newly diagnosed with CRC between 2007 (the year when insurance information were available) and 2013 (the most recent year for which data were available) with single primary CRC. The exclusion criteria included that patients at diagnosis were less than 18 years old, had undefined TNM stage, developed more than one primary cancer but the CRC wasn’t the first one, had unknown insurance status, marital status, income or education level, had unknown cause of death or unknown survival months. The 7th AJCC staging edition was adopted to redefine stage I, II, III, and IV. Patients with AJCC stage 0 disease were also excluded.

ZQ, WGY and WXS conceived of and designed the study. ZQ and WYF wrote the manuscript. HHQ, HR, XL and CYG performed the analyses. LER prepared all figures and tables. All authors reviewed the manuscript.

We thank engineer Dandan Qin for the help of statistical analysis.