Trends of long noncoding RNA research from 2007 to 2016: a bibliometric analysis

Purpose: This study aims to analyze the scientific output of long noncoding RNA (lncRNA) research and construct a model to evaluate publications from the past decade qualitatively and quantitatively.

Results: A total of 3,008 papers on lncRNA research were identified published by June 17, 2017. The journal, Oncotarget (IF2016, 5.168) ranked first in the number of publications. China had the largest number of publications (1,843), but the United States showed its dominant position in both citation frequency (45,120) and H-index (97). Zhang Y (72 publications) published the most papers, and Guttman M (1,556 citations) had the greatest co-citation counts. The keyword “database” ranked first in research frontiers.

Conclusion: The annual number of publications rapidly increased in the past decade. China showed its significant progress in lncRNA research, but the United States was the actual leading country in this field. Many Chinese institutions engaged in lncRNA research but significant collaborations among them were not noted. Guttman M, Mercer TR, Rinn JL, and Gupta RA were identified as good candidates for research collaboration. “Database,” “Xist RNA,” and “Genome-wide association study” should be closely observed in this field.

Long noncoding RNAs (lncRNAs) belong to a large class of non-protein coding transcribed RNA molecules with a length more than 200 nucleotides [1]. The length threshold is a simple but convenient biophysical cutoff that separates lncRNAs from smaller noncoding RNA species (e.g. miRNAs, siRNAs) [2, 3]. In the past decade, lncRNAs have attracted investigators’ much attention because the cumulative evidence indicated that lncRNAs play a pivotal role in multiple biological processes based on a variety of underlying mechanisms, including epigenetic regulation [4], organ or tissue development [5], cell development and differentiation [6], protein transport [7], gene transcription [8], chromatin remodeling [9], and metabolic processes [10]. Meanwhile, increasing evidence suggested that dysregulations and mutations of these lncRNAs were associated with development and progression of various human diseases, such as lung cancer [11], liver cancer [12], colon cancer [13], and breast cancer [14].

The research interest on lncRNA has increased dramatically in recent years, and many academic journals have published articles on lncRNA research. Nevertheless, few attempts have been made to analyze the evolution of scientific output in this field systematically. Bibliometrics is a good choice of method to analyze the literature of a scientific domain, and assess trends in research activity over time [15].

The objects of this study are to systematically evaluate lncRNA research from 2007 to 2016, to determine the publication pattern of lncRNA research outputs, to capture the collaboration pattern between countries/institutions/authors, and to identify research trends and frontiers in this field.

A total of 3,008 articles met the search criteria (Figure 1) (Supplementary Figure 1). The distribution of annual publications was shown in different time stage (Figure 2A). The overall trend of publication increased from one publication in 2007 to 1,342 publications in 2016. 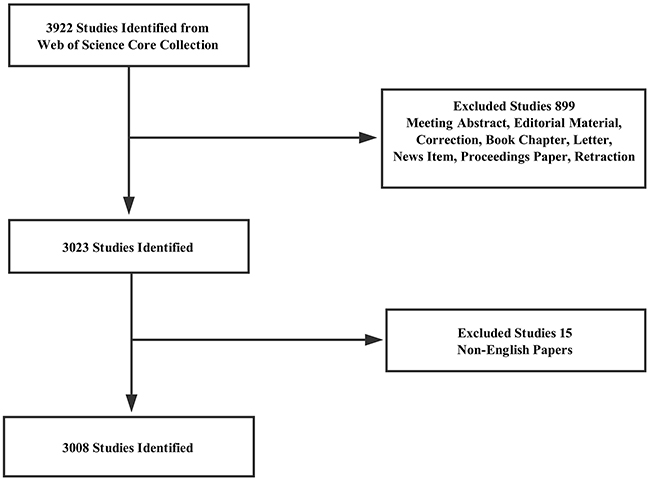 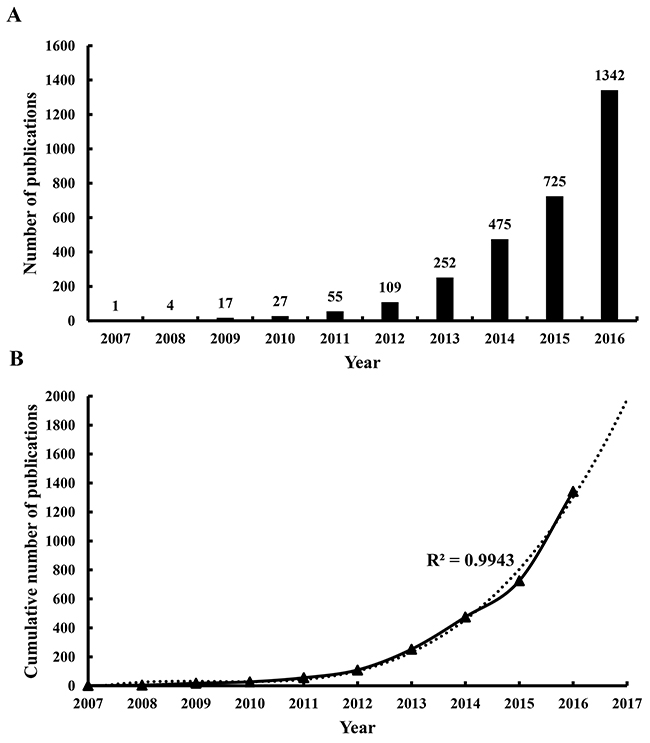 Figure 2: Publication outputs and growth prediction. (A) The number of annual publications on lncRNA research from 2007 to 2016; (B) The model fitting curve of growth trend of lncRNA publications.

Table 1: The top 15 journals that published articles on lncRNA research

Figure 3 presented a dual-map overlay of journals. The left side was the citing journals map, and the right side was the cited journals map. The labels on the map showed the disciplines involved in journals. The lines were citation links starting from the left and point to the journals on the right. This dual-map overlay indicated that most articles were published in molecular journals, biology journals, and immunology journals, and they mainly cited journals from molecular, biology, and genetics areas.

Figure 3: The dual-map overlay of journals related to lncRNA research.

Distribution by countries and institutions

The 3,008 articles on lncRNA research were contributed by 57 countries/territories (Supplementary Table 2). There were extensive collaborations between countries/territories (Figure 4A). In relation to the top 10 countries that contributed to lncRNA research (Table 2), China had the largest number of publications (1843), followed by the United States (779), Germany (108), and England (100). 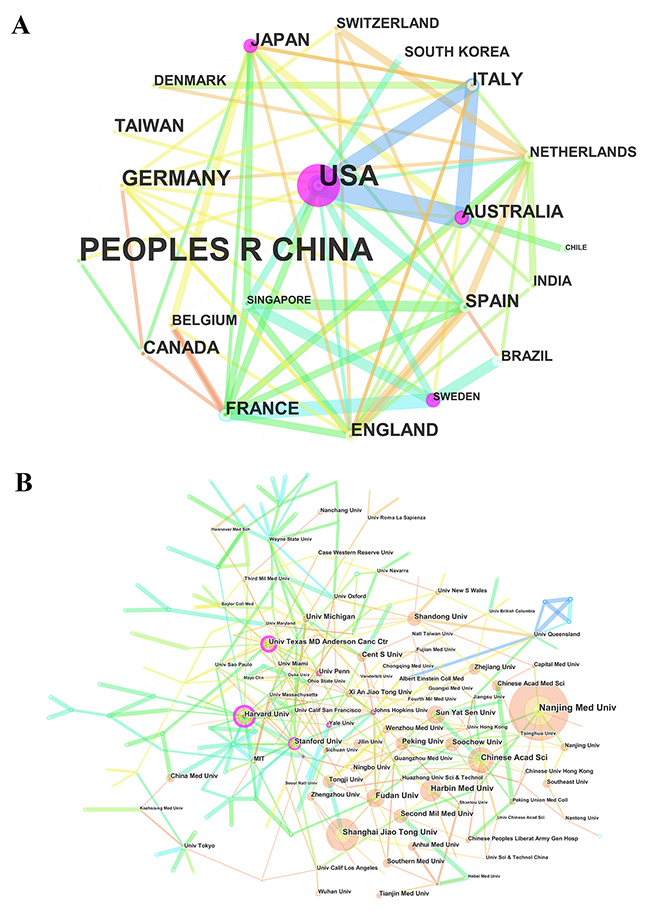 Table 2: The top 10 countries and institutions contributed to publications on lncRNA research

All articles related to lncRNA research had been cited 91,530 times since 2007. In top four countries (according to the number of publications), the United States had both the largest number of citations (45,120) and the highest value of H-index (97). Especially the citation counts, the United States accounted for 49.30% of the total citations. China had the largest number of ESI top papers (141). Due to the gap in the number of publications, Germany and England had no advantage in the ranking of these three items (Figure 5). 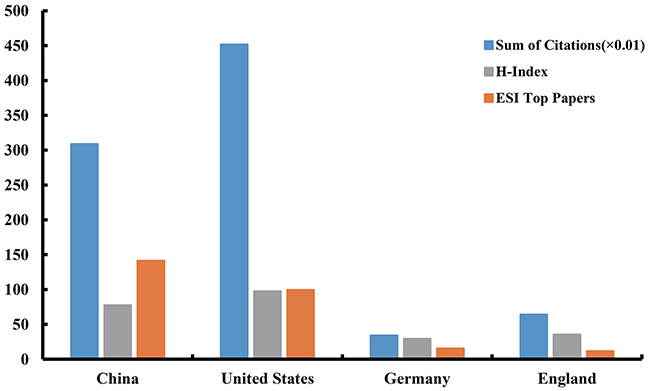 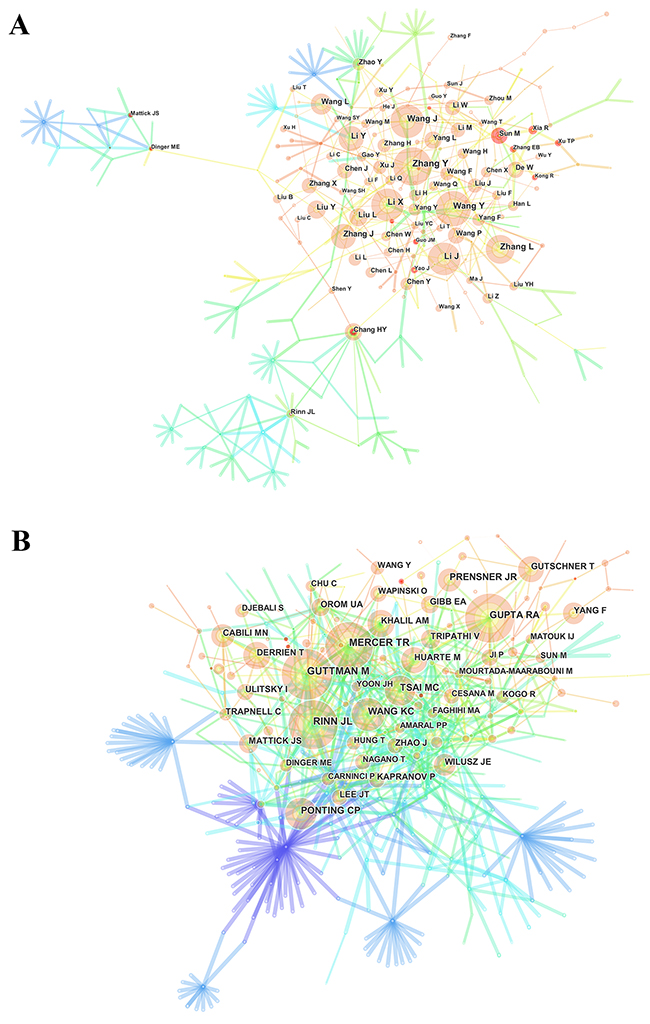 Reference analysis is one of the most significant indicators in bibliometrics. The co-citation map of references suggests the scientific relevance of the publications (Figure 7A). Here, the modularity Q score was higher than 0.5 (0.5096) (Supplementary Figure 3), which indicates the network was reasonably divided into loosely coupled clusters. The average silhouette score was greater than 0.5 (0.6383) (Supplementary Figure 3), which means the homogeneity of these clusters was acceptable on average. All clusters were labeled with index terms extracted from the references (Supplementary Figure 4). The largest cluster #0 was labeled as “long noncoding RNA,” followed by the second largest cluster #1, labeled as “macroRNA underdogs,” and the third largest cluster #2, labeled as “poor prognosis.” These clusters mentioned above were also presented in a timeline view (Figure 7B). 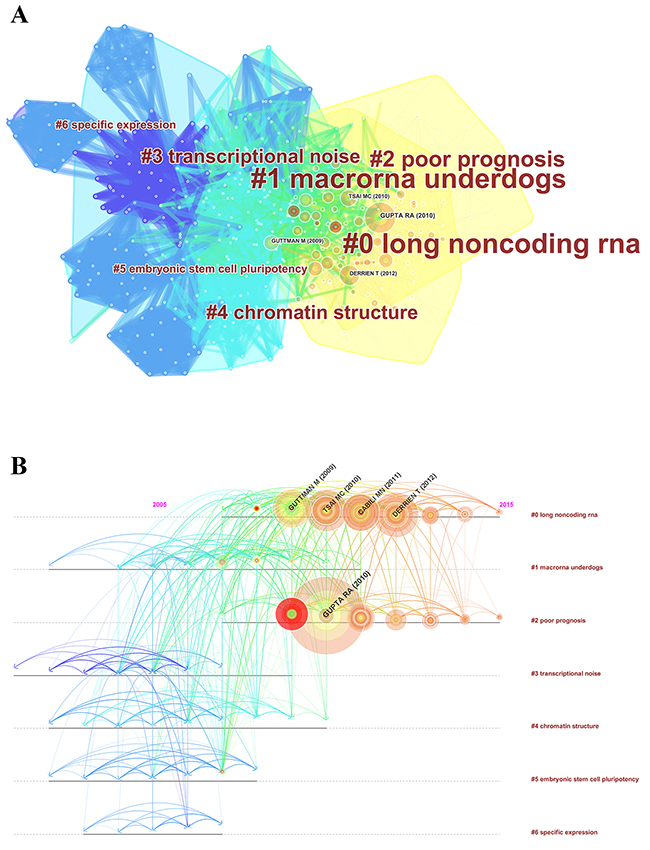 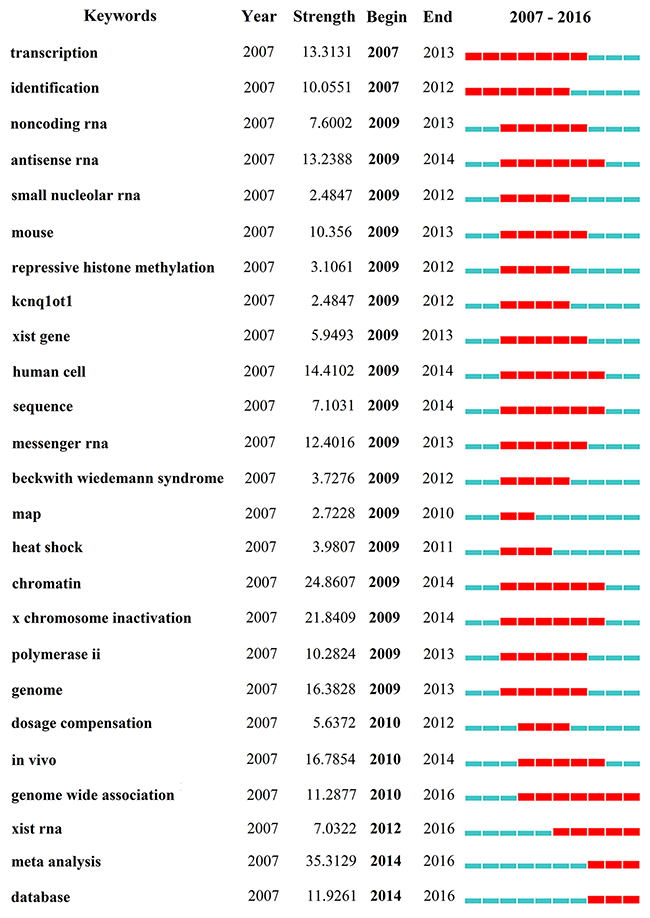 Figure 8: The keywords with the strongest citation bursts of publications on lncRNA research.

In the list of top 10 countries (5 European countries, 2 American countries, and 3 Asia-Pacific countries), China was the only developing country, contributed to more than 60% of the total number of publications, indicating that it has made significant progress in this field. Although China had a huge advantage in the number of publications, the United States showed its dominant position in both citation frequency and H-index. Therefore, from the perspective of research quality, the United States was the leading country in this field. Regarding the collaboration network, there was a broad range of cooperation between Western nations. The strongest collaborations were identified among the United States, Australia, and Italy, between France and Sweden, and between Spain and Singapore.

In the list of top 10 institutions, except Harvard University, the remaining 9 institutions were all from China. Moreover, Chinese institutions accounted for the largest proportion in the collaboration network. That is the reason why China contributed to the most number of publications related to lncRNA research.

According to the top 10 authors identified in this analysis, each contributed to no fewer than 35 papers. Therefore, they were identified as “prolific authors.” However, none of these prolific authors were included in the list of top 10 co-cited authors, with regard to annual co-citation counts, suggesting that prolific authors should consider more about their quality of papers while working to increase their number of papers. For co-cited authors, the authors who had at least 1,000 co-citation counts, include Guttman M, who provided an emerging model that identified modular regulatory principles of lncRNAs [16]; Mercer TR, who reported the structure and function of lncRNAs in epigenetic regulation [17]; and Rinn JL, who explored the genome regulation by lncRNAs [18]. Although none of these authors belonged to prolific authors, they made crucial contributions to lncRNA research.

i. Database: Many bioinformatics studies on lncRNAs have been conducted in recent years. The lncRNA profiles in these studies were mainly obtained from two databases: The Cancer Genome Atlas (TCGA) database and Gene Expression Omnibus (GEO) database. The lncRNA sequence extracted from TCGA or GEO were analyzed via bioinformatics methods, and lncRNA-expression signatures were identified as potential prognostic biomarkers for related cancer [21-24]. Moreover, the association between lncRNA expression and epigenetic regulation can also be revealed through bioinformatics analysis [25-27]. Apart from the two databases mentioned above, there are some specialized databases for lncRNA, including PLncDB [28], lncRNASNP [29], LncReg [30], and LNCCipedia [31], and so forth. These databases provide comprehensive data for lncRNA bioinformatics research.

ii. Meta-analysis: Many of the meta-analysis papers related to lncRNA research have been published in recent years, including some that were high-quality [32-34].

iii. Xist RNA: Xist RNA is a long noncoding RNA, which orchestrates X chromosome inactivation, a process that entails chromosome silencing and remodeling the three-dimensional structure of the X chromosome [35]. However, this argument remains controversial. A recent study found that Xist-mediated silencing required a direct interaction between Xist RNA and Lamin B receptor (an integral part of the nuclear lamina) [36]. The results indicated that Xist-mediated silencing needs lamina recruitment [36]. Apart from this, some studies have focused on the role and molecular mechanisms of Xist RNA in disease progression [37-39].

Data on lncRNA publications were retrieved and collected from Web of Science Core Collection (WoSCC) database (Science Citation Index-Expanded journals). The analysis of data was relatively comprehensive and objective. However, the most of the publications in the WoSCC database were in English. Publication in non-English were very few. Other databases (e.g. Ovid, PubMed, Scopus, and Google Scholar) were not analyzed since WoSCC is more advanced at providing detailed data (e.g. annual publications, journal sources, author information, country and institution information). Secondly, the results of bibliometric analysis and the results of actual research conditions were still different, as some recent publications do not have a high citation count. Lastly, although all searches were retrieved on June 17, 2017, to avoid bias due to the update of WoSCC database for the year 2016, the database is still receiving new data. Despite this, we think this paper includes the vast majority of publications from 2016, and the small amount of new data may not change the conclusion.

This study helps investigators master the trends of lncRNA research. The top three journals that contributed to the largest number of publications were Oncotarget, Tumor Biology, and PLoS ONE. China, United States, and Germany were the top three countries engaged in lncRNA research. The strongest cooperation was observed between developed countries, particularly, the United States was in the dominant position. There were many Chinese institutions engaged in lncRNA research, but significant collaborations among them were not noticed. Guttman M (Broad Institute, United States), Mercer TR (University of Queensland, Australia), Rinn JL (Harvard University, United States), and Gupta RA (Stanford University, United States) may be good candidates for research collaboration in this field. “Database,” “Xist RNA,” and “Genome-wide association study” may be the latest research frontiers, and related studies may pioneer this field in the next few years.

Source of the data and search strategy

Literature was searched from the Science Citation Index-Expanded (SCI-E) of the Web of Science Core Collection (WoSCC) of Clarivate Analytics on June 17, 2017. The data were extracted from the public database. Ethical approval was not applicable in this case.

CiteSpace IV was used to (i) capture the relationship between citing journals and cited journals, (ii) identify the collaborations between countries/institutions/authors, (iii) perform co-citation analysis on authors and references, (iv) perform a citation-burst analysis of keywords, and (v) generate visualizations of all the items mentioned above.

This study was supported by the National Natural Science Foundation of China (No. 81573191). We thank Prof. Bei Wang for her help in the statistical analyses.

The authors declare no financial interests in the findings described in this study.

15. Van Raan AF. The use of bibliometric analysis in research performance assessment and monitoring of interdisciplinary scientific developments. Technology Assessment-Theory and Practice. 2003; 1: 20-9.