Hepatocellular carcinoma (HCC) is the fifth most commonly diagnosed cancer in males and the ninth in females, with an estimated 782 500 new cancer cases and 745 500 deaths worldwide occurring in 2012. It is the second leading cause of cancer-related death in men and the sixth in women [1]. Especially, China makes up about 50% of the total number of cases and deaths alone. There are an estimated 343700 patients died of HCC in 2015 [2]. Etiology study shows chronic hepatitis B virus (HBV) infection is the major causes of HCC in Asia and the other factors including hepatitis C virus (HCV) infection, alcohol abuse, smoking, autoimmune hepatitis, and several metabolic diseases are considered as the minority causes [1]. Despite rapid progression advanced treatments including surgical techniques and other therapies, the prognosis of HCC patients is still poor due to high frequency of metastasis and recurrence [3, 4].

HCC is one of the most hypoxic cancer with its multiple nodules scavenging a substantial amount of oxygen [13]. A growing body of literatures report that HIF1α is significantly elevated and associates with clinical outcome in HCC [14–16]. Hypoxia-targeted therapeutic strategies for HCC may be under a promising value. Improvement of hepatoma hypoxia inhibits cancer growth and migration [17]. The acute hyperbaric oxygen therapy (HBOT) after hepatectomy improves the progression of HCC [18].

Clinicopathologic features of 115 patients with HCC 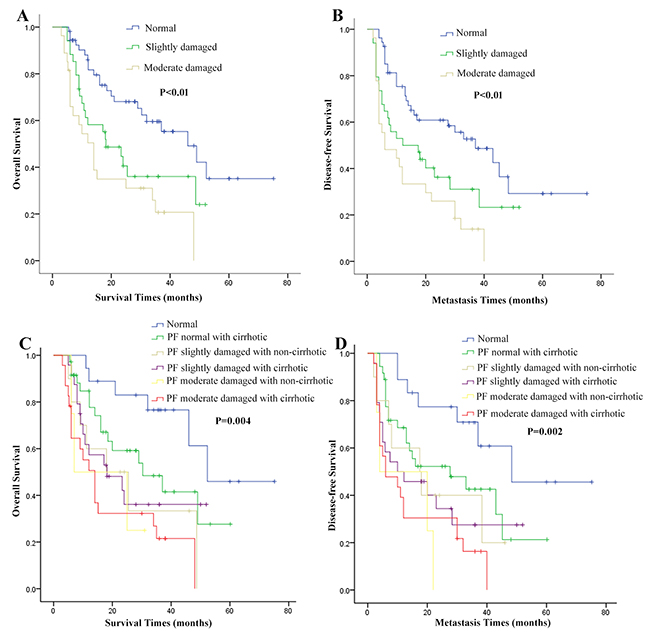 Hypoxia is the characteristic microenvironment of chronic hepatitis [19]. HIFs activation contributes to liver fibrosis development [20]. We explored whether the incremental cirrhotic condition accelerates poor prognosis or not. The results of clinicopathologic parameters showed that liver cirrhosis had potential differences among three groups. For further study, we divided the three groups into six groups according to the presence of liver cirrhosis or not (Figure 1C, 1D). Noteworthy, subgroup analysis showed that moderately pulmonary function with cirrhotic had significantly lower OS and DFS time than normal pulmonary function without cirrhotic group (P=0.004 and P=0.002). Furthermore, the 1-, 3-, and 5-year OS rates in patients with damaged pulmonary function and cirrhosis were lower than those in normal pulmonary function group (Table 5). These results demonstrated that pulmonary function may affect the prognosis of HCC patients after hepatic resection. Liver cirrhosis may accelerate this process. Hypoxia may influence the survival of long-term survival.

In this study, we found that pulmonary function impaired was associated with poor clinicopathological features including smoking, liver cirrhosis, tumor size and Edmondson-Steiner grade. Through Cox proportional hazard regression analysis, we also discovered that pulmonary function and liver cirrhosis were independent risk factors for OS and DFS. In addition, pulmonary function impairment predicted lower OS and DFS time. The underlying reason may be due to the low oxygen level in patients with pulmonary function impairment. Previous evidences support that hypoxic microenvironment stimulates cancer cells proliferation, angiogenesis, treatment resistance and metastasis [5, 6]. Hypoxia protects cancer cells from chemotherapy induced apoptosis through both HIF-1α-mediated and HIF-1α-independent in HCC [21, 22]. HCC is a hyper vascular cancer, but the cancer vessels are aberrant both in structure and function [23, 24]. Therefore, the prognosis of HCC is poor due to cancer hypoxia [21, 25].

Oxygen performs an essential function in the living body, which transports around the body by the vasculature from lung [26]. Pulmonary function testing can reflect the physiological state of lung and evaluate the pulmonary function reserve [27]. FEV1/FVC as gold classification was used to evaluate pulmonary function. It is reported that FEV1/FVC was associated with poor prognosis of malignant cancer, such as lung cancer and colorectal cancer [28, 29]. Decreased FEV1/FVC can reflect the systemic hypoxic state of the patients. Our results were parallel with previous findings that the decreased FEV1/FVC had the negative impact on cancer prognosis. It was that impaired pulmonary function might lead to a lower oxygen content in the focal region, which may aggravate intratumoral hypoxia.

Moreover, patients with pulmonary function impaired and cirrhosis had worse prognosis than those without cirrhosis. The potential explanation was that liver cirrhosis might aggravate tumor hypoxia. Hypoxia is the characteristic microenvironment of chronic hepatitis [19, 30]. Liver cirrhosis is characterized by the excessive deposition of extracellular matrix (ECM) proteins such as type I collagen in the liver parenchyma. This is the manifestation of a wound healing response to persistent or repeated injury [31]. With chronic liver disease, abnormal angiogenesis aggravates the hypoxia of liver. Of note the pattern of fibrosis varies according to the underlying disease [30]. In hypoxic microenvironment condition, HIF-1s is a vital regulator of the response of oxygen deprivation and plays critical roles in the adaptation of cancer cells [5]. HIF-1α expression activates hepatic stellate cells (HSCs) and fibroblasts, which differentiates towards to myofibroblasts. The latter proliferates and migrates to injured areas where they secrete ECM [32–34]. This procession in turn makes it worse for hypoxia. So, in our results showed that, compared with impaired pulmonary function groups, impaired pulmonary function with cirrhosis groups had significantly lower OS and DFS time.

From 2011 to 2015, a total of 115 HCC patients underwent liver resection from the Affiliated Hospital of Chengdu University and West China Hospital of Sichuan University were recruited into this study. The patients died during perioperative period were excluded. All patients in our study did not receive any neoadjuvant chemotherapy or local ablation before hepatectomy. Pulmonary function was evaluated according to gold classification. FEV1/FVC ratio (also called Tiffeneau-Pinelli index), the main parameter used for the classification of the patients, represents the proportion of a patient’s vital capacity that they are able to expire in the first second of forced expiration to the full vital capacity. Patients were classified as follow. Normal: FEV1/FVC%≥70; Slight: FEV1/FVC%<70, FEV1%≥80; Moderate: FEV1/FVC%<70, 50≤FEV1%<80; Severe: FEV1/FVC%<70, FEV1%<50 [35].

The follow-up data were regularly collected by the same experienced team. For all patients, the latest follow-up was terminated on March, 2017. OS was defined as the time from hepatectomy to death or to the date of the last follow-up. DFS was defined as the time from hepatic resection to the date when recurrence or metastasis was detected. Liver function tests, alpha fetoprotein (AFP), ultrasonography and chest radiography were performed every 3 months. If recurrence or metastasis was suspected, computed tomography (CT) scan and/or magnetic resonance imaging (MRI) were performed. Once tumor relapsed, repeat hepatectomy, radiofrequency ablation, or transcatheter arterial chemoembolization (TACE) were used to treat these patients, depending on the number and position of the recurrent tumors, the general condition of the patient, and the liver function.

Statistical analysis was performed by SPSS 21.0 software. Categorical variables were compared using the Pearson χ2. All continuous data were presented as mean ± SD and were compared by the Student t test. OS and DFS curves were obtained using the Kaplan-Meier method, and differences in survival were evaluated using the log-rank test. Univariate and multivariate analysis were analyzed with Cox proportional hazards regression model to verify the independent risk factors. All potential variables were included in Cox Univariable analysis. Then the variables with significant P value (P < 0.05) were included in Cox multivariable analysis. Using STATA software to check whether the assumed hazard ratio comply with the assumption of proportionality beforehand. 2-side P value< 0.05 was considered to be statistically significant.

This work was supported by Youth Foundation of Chengdu University. (No. 2015XJZ33).