In this study, we investigated the molecular pathways regulating breast cancer liver metastasis. We identified 48 differentially expressed genes (4 upregulated and 44 downregulated) by analyzing microarray dataset GSE62598 from Gene Expression Omnibus (GEO). We constructed a genetic interaction network with 84 nodes and 237 edges using the String consortium database. The network was reliably robust with a clustering coefficient (cc) of 0.598 and protein-protein interaction (PPI) enrichment p value of zero. Using the Gene Ontology and Kyoto Encyclopedia of Genes and Genomes databases, we identified MAPK, NFκB and VEGF signaling pathways as the most critical pathways regulating breast cancer liver metastasis. These results indicate that the distinct breast cancer metastatic stages, including dissemination from the primary breast tumor, transit through the vasculature, and survival and proliferation in the liver, are regulated by the MAPK, NFκB, and VEGF signaling pathways.

Metastatic disease is a complex, multistage process that involves detachment of breast cancer cells from the primary tumor, which then travel through the blood or lymphatic system and finally survive and proliferate in the liver. Given the complex multistep process, liver metastasis involves a sophisticated network of molecular events. However, the molecular mechanisms associated with breast cancer metastasis to the liver are unclear, and their understanding is essential for developing more effective therapies. In this study, therefore, we generated a genetic interaction network using microarray gene expression data from breast cancer liver metastases and explored the molecular mechanisms involved using bioinformatic analyses. 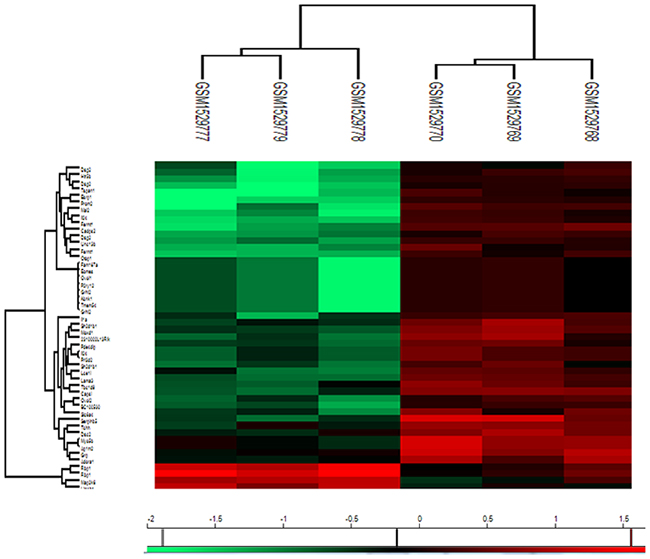 A genetic interaction network based on the differently expressed genes

A genetic interaction network was constructed from the 48 differentially expressed genes using the String platform future analysis (Figure 2). The interaction network consisted of 84 nodes and 237 edges. The average node degree was 5.64. The network was reliably robust with a clustering coefficient (cc) of 0.598 and protein-protein interaction (PPI) enrichment p value of zero. 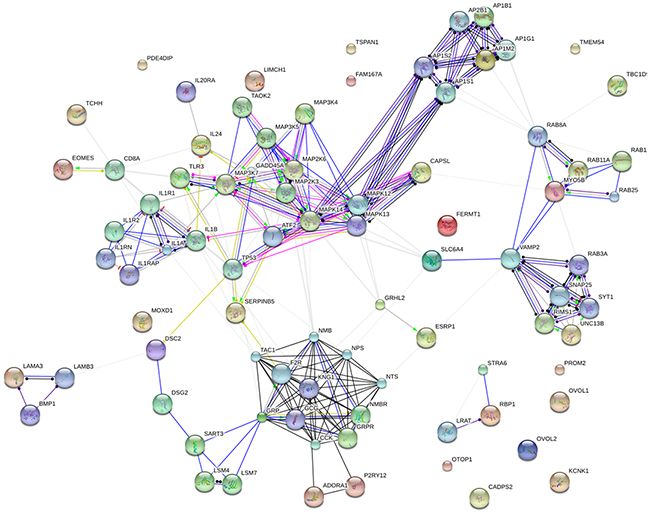 Dissemination of carcinoma cells is the initial step of the metastasis, which is initiated by epithelial-mesenchymal transition (EMT) program during which tumor cells acquire mesenchymal features and lose epithelial properties [8, 9]. The complex molecular events during EMT are initiated and controlled by signaling pathways that respond to extracellular cues. The transforming growth factor-β (TGF-β) signaling family plays a predominant role in EMT [10]. Moreover, the MAPK signaling pathway is required for the initiation of TGF-β induced EMT [11, 12]. In addition to TGF-β family proteins, tyrosine kinase receptors (RTKs) play a key role in the trans-differentiation process, further highlighting the importance of MAPK signaling [13]. MAPK pathway inhibitors have been used clinically for many cancers, including breast cancer [14]. In addition, NFκB is an important regulator of the expression of various proteins involved in the immune response [15].

After successfully disassociating from the primary tumor, metastatic carcinoma cells traverse the blood or lymphatic system, during which they interact with several cell types including platelets, neutrophils, monocytes, macrophages, and endothelial cells [16]. The circulating tumor cells also interact with platelets [17] and high platelet counts are associated with poor prognosis in carcinomas [18]. Recent studies have revealed that platelets alter the fate of circulating cancer cells [19]. Platelet-tumor cell contacts and platelet-derived TGF-β synergistically activate the TGF-β/Smad and NFκB pathways in cancer cells enabling their transition to an invasive mesenchymal-like phenotype, thereby enhancing metastasis [20]. Inhibition of NFκB signaling in cancer cells or ablation of TGF-β1 expression in platelets protects against lung metastasis in vivo [20].

In the liver, a pre-metastatic niche is established by VEGFR+ bone marrow progenitors before the arrival of tumor cells [21]. In fact, the initial events during the development of metastasis are VEGF-dependent [22]. Once the metastatic cancer cells survive in the new environment, they undergo colonization before the onset of the final process of malignancy. In general, a tumor requires angiogenesis to grow beyond 1-2 mm in size. In the initial pre-vascular phase, the size of the tumor does not exceed a few millimeters, but, neo-vascularization results in rapid growth of the tumor. Vascular endothelial growth factor (VEGF) is a key regulator of angiogenesis, which stimulates endothelial proliferation and migration, inhibits endothelial apoptosis, and increases vascular permeability and vasodilatation [23]. VEGF-targeting therapy has shown significant benefits in the treatment of metastatic breast cancer [24, 25]. In conclusion, based on the genetic interaction network, we identified MAPK, NF-kappa B and VEGF signaling pathways as key regulators of breast cancer liver metastasis.

Microarray dataset with the accession number GSE62598 was downloaded from Gene Expression Omnibus (GEO). In this study, the authors examined if the propensity of breast cancer cells to metastasize to liver was associated with distinct patterns of immune cell infiltration [26]. Total RNA was extracted from 4T1 parental and individual metastatic sub-populations. The mRNA array was performed on Agilent-014868 Whole Mouse Genome Microarray 4×44k G4122F platform.

The gene expression profiles of metastatic tumor cells versus disseminated tumor cells were normalized by log10 transformation after normalization. Then, Significance Analysis of Microarrays software (SAM, http://statweb.stanford.edu/~tibs/SAM/) was used to produce a cluster of up- or down-regulated genes [27].

All authors contributed towards data analysis, drafting and revising the paper and agree to be accountable for all aspects of the work.