Materials and Methods: MEDLINE®, EMBASE® and the Cochrane Library were carried out to find studies until January 2017. Pooled mean difference (MD) and 95% confidence interval (CI) were calculated to evaluate the value of LVEF and LAD in the prediction of NOAF after AMI. We performed sensitivity analyses to explore the potential sources of heterogeneity. Statistical analyses were carried out using the Revman 5.3.

Conclusions: Our meta-analysis demonstrated that both decreased LVEF and increased LAD levels were associated with greater risk of NOAF following AMI.

Atrial fibrillation (AF) occurs commonly in hospitalized patients with acute myocardial infarction (AMI), with a reported incidence between 2% and 20% [1], and is closely associated with prolonged hospitalization, increased subsequent cardiovascular mortality in AMI patients [2–6]. The development of AF in the AMI setting is multiple factors, including older age, systemic inflammation, heart failure, acute ischemia, elevated left ventricular (LV) end-diastolic pressure, left atrial (LA) enlargement or infarction [7]. As well known, left ventricular ejection fraction (LVEF) serves as a significant prognostic marker of cardiac function, and left atrium diameter (LAD) responses to whether left atrial enlargement or not, both of those abnormalities are considered as a risk predictor for cardiovascular disease. However, to our knowledge, only a few studies directly evaluated the associations between LVEF or LAD and new-onset AF (NOAF) in patients with AMI. So we conducted this comprehensive meta-analysis to explore the impact of LVEF on NOAF following AMI by collecting data for previously published studies. Furthermore, the relationship of LAD and NOAF was assessed by a subgroup analysis.

Our study strictly complies with the guidelines of the meta-analysis of observational studies in epidemiology group (MOOSE) [8]. A comprehensive systematic search of MEDLINE®, EMBASE® and the Cochrane Library was carried out to find relevant studies until January 2017. Searches combined free-text and MeSH terms relating to “left ventricular ejection fraction” or “LVEF,” “atrial fibrillation” and “myocardial infarction” or “myocardial infarct”. Reference lists from the identified articles were manually examined for relevant new articles. Abstracts, unpublished reports, and non-English language articles were not included.

We restricted our search to studies published in English. Abstracts and titles of related articles were initially scanned by a reviewer. Potentially relevant articles were then considered by at least 2 independent reviewers. Disagreements were resolved by discussion or upon consensus from a 3rd or 4th reviewer. Two reviewers agreed on the inclusionary or exclusionary status of 90% of the reviewed studies. Full texts of the selected articles were then screened by both authors for inclusion in the review. All disagreements were resolved by consensus.

Quality assessments were evaluated with the Newcastle-Ottawa Scale (NOS) list for nonrandomized studies. Each study was assessed in three aspects using this “star system”: the selection of the study groups; the comparability of the groups; and the ascertainment of the outcome of interest (Supplementary Tables 1 and 2).

Two blinded reviewers independently used a standardized data-extraction form to determine appropriately to extract data. We extracted data included the lead author’s last name, the publication year, and the origin of the studied population; the study design; the characteristics of the studied population (sample size, age, sex, time of AF detection, and withdrawals and dropouts of patients); endpoint evaluations (definitions of NOAF and methods of AF detection); rates of NOAF; and means and SDs of LVEF in each group. Disagreements were resolved by consensus from another reviewer.

The association strength between LVEF or LAD and NOAF was measured by the mean difference (MD) and 95% confidence interval [CI). The significance of pooled MD was tested by z-test (P < 0.05 was considered significant). Heterogeneity was evaluated with Cochran’s Q statistic and quality by I2 statistic. We premeditated that mild heterogeneity might be less than 30 percent of the variability in point estimates and the values of I2 exceeding 50% might express as significant heterogeneity [9], so we used the random-effects model for our study and between study variance, otherwise, with a fixed-effects model. To explore sources of heterogeneity, we performed several sensitivity analyses. Publication bias was also evaluated by inspecting funnel plots. All analyses were conducted with the use of Review Manager, version 5.3 (Revman, The Cochrane Collaboration; Oxford, UK).

The search yielded 546 research reports, of which 49 were excluded for having the same title or authors; 454 were excluded because they were laboratory studies, animal studies, review articles, or irrelevance to the current analysis. Of the remaining 33 studies, 21 studies did not assess the NOAF or AMI. 8 studies researched segmental LVEF levels and lacked of concrete LVEF data. 2 studies included the history of AF. One study just published by abstract. One study included patients after cardiac surgery. The foregoing studies were all excluded, and 10 observational studies [10–19] were finally included in our meta-analysis (Figure 1). As a result, 7493 patients were involved in our analysis: 708 patients in AF group and 6785 patients in without AF group. 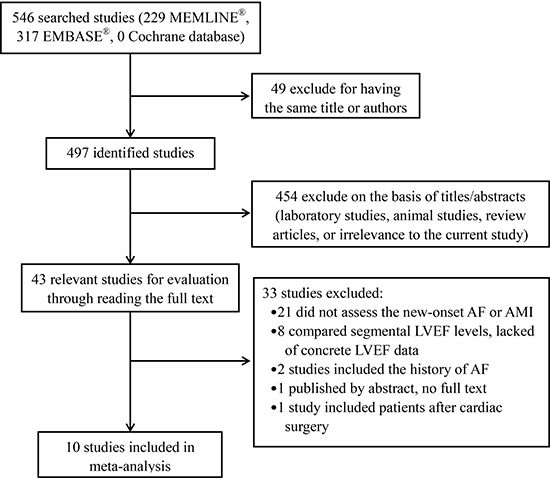 The NOS for assessing the quality of the 10 studies is shown in Table 1 and the scores ranged from 6–7. Table 2 presents the characteristics of each study. The average age of patients in the included studies ranged from 58 to 74 years and the rate of NOAF ranged from 7.44% to 20.7%.

Table 1: Evaluation of the quality of the 10 included studies by using the Newcastle-Ottawa Scale#

#The Newcastle-Ottawa Scale criteria are listed in supplementary files.

Table 2: Characteristics of the 10 studies included in the meta-analysis 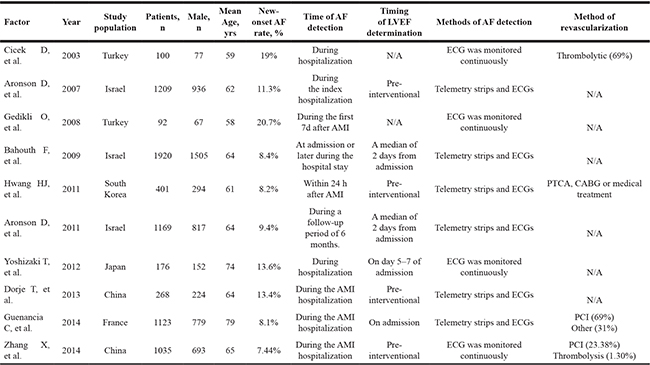 Overall, decreased baseline LVEF levels had a significant positive association with NOAF in patients with AMI. The MD in the LVEF levels between the patients with and those without NOAF was −4.91 units (95% Cl: −5.70 to −4.12), test for overall effect z-score = 12.18 (p < 0.00001, I2 = 35%) (Figure 2). However, an asymmetric funnel plot showed the possible existence of publication bias (Figure 3). Because of small sample size, we could not explain the exact cause of heterogeneity in our meta-analysis. 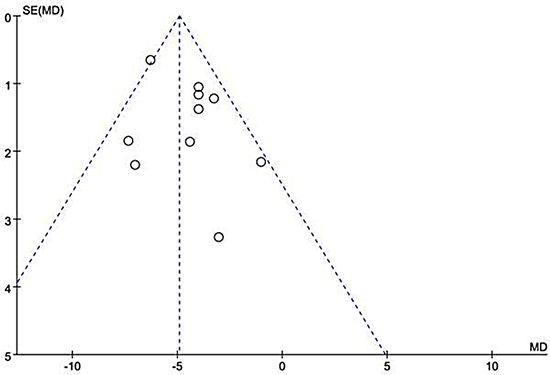 Interestingly, our meta-analysis demonstrated that lower LVEF levels were associated with NOAF occurrence after AMI. Furthermore, in a subgroup analysis, we also found that increased LAD levels related to greater risk of NOAF following AMI, although there was significant heterogeneity. Nonetheless, sensitivity analyses indicated that differences in follow-up period might account for the heterogeneity. Thus, present study might provide insights into mechanisms and lead to greater understanding of the risk factors for NOAF after AMI.

As well known, current evidence regarding the associations between NOAF and in-hospital or long-term outcomes in AMI patients is convincing. These outcomes include the length of hospital stay, heart failure, stroke, recurrent myocardial ischemia, major bleeding and increased mortality [5, 21–25]. Therefore, prediction of NOAF following hospitalization for AMI may reduce clinical adverse events [26]. In the setting of AMI, previous studies have demonstrated a number of risk factors for NOAF in AMI patients, such as old age, female gender, obesity, history of hypertension, history of stroke, higher Killip class or heart failure, hypotension, higher heart rate, higher CHADS2 score, increased peak creatinine kinase, C-reactive protein and N-terminal pro-brain natriuretic peptide levels [5, 6, 13, 16, 21, 23–25, 27, 28]. To our knowledge, this is the first meta-analysis directly evaluating the impact of LVEF and LAD on NOAF in patients with AMI.

Even though the exact mechanism for LVEF or LAD in AMI patients with NOAF was still unclear, several previous relevantly studies have contributed evidence to investigate it and provided potential responsible mechanisms. Aronson and colleagues reported that both LVEF and LAD were independently associated with NOAF, suggesting that increased LV filling pressures may contribute to the development of AF after AMI [19]. Numbers of studies have reported multitudinous pathologic mechanisms of AF following AMI, which could include abrupt changes such as increased LV filling pressure, deterioration of LV systolic functions, or direct ischemic insult of the atria [11, 22, 23, 29–32]. AMI often results in change LV filling dynamics, which may lead to advanced diastolic dysfunction. Subsequently, diastolic dysfunction may produce increased LA pressure and initiate LA remodeling, promoting the progression to AF [5, 7, 19]. In addition, experimental and clinical researches have demonstrated that increasing atrial pressure and/or causing acute atrial dilatation may act an important part in the development of AF in the AMI [5–7, 18, 29, 33]. Hence, it was not difficult to understand that left atrial enlargement that assessed by LAD was major predisposing factors for the development of AF [34–36]. Overall, all of above might indicate the potential mechanisms for the result of the present meta-analysis.

From the conclusion of this study, we could deduce that decreased LVEF and increased LAD levels might be associated with worse clinical prognosis in patient with NOAF following AMI. Early identification of patients with AMI who are at risk of AF attack is of particular importance. Hence, NOAF should be close monitoring for avoiding hemodynamic depression. Management of AF in patients with AMI should follow guideline recommendations [37–39]. It has been well established that oral anticoagulation is a proven therapy for stroke prevention in AF patients with high thromboembolic risk [21]. However, there is insufficient evidence to support prophylactic anticoagulant therapy for AMI patients with high risk of AF. Further studies specific to AF prevention in the patient with AMI are needed.

Our meta-analysis may provide worthy and reliable information regarding the relationships between LVEF, LAD, and NOAF in patients with AMI. However, there are still some potential limitations to this meta-analysis. First, the definitions of NOAF and methods of AF detection were not accordant, and some information on the timing of LVEF determination and the method of revascularization was not applicable, which might be subject to the source of potential bias. Second, most of the included studies did not directly research the impact of LVEF and/or LAD on NOAF after AMI, some potential confounders might have not entirely eliminated. Third, our analysis was based on observational studies, and the numbers of studies and patients were rather limited. Finally, the conclusions of the absence of publication bias were not always reliable. Therefore, the results of our analysis should be interpreted cautiously, and future investigations are needed to clarify the mechanisms of NOAF further.

In conclusion, our meta-analysis demonstrated that both decreased LVEF and increased LAD levels might be associated with greater risk of NOAF following AMI, which contributing compelling evidence that LVEF and LAD may be a useful marker in predicting NOAF in AMI patients.

This work was partially supported by the National Natural Scientific Foundation (No. 81473471).