Gastric cancer remains the major cause of cancer-related death with a bad prognosis [1–3]. Despite recent efforts in multimodal treatment approaches, approximately half of patients diagnosed with advanced gastric cancer still die from recurrent disease after surgical resection or distant metastasis [4, 5]. Now it has been recognized that multiple genetic and epigenetic alterations or abnormality occur in the development of GC [6]. Thus, the identification on the mechanism of initiation, progression, as well as investigation of differential diagnostic prognostic marker and potential drug target, is still needed and will help to provide better prognosis and individualized treatments.

The sirtuins are a family of proteins homologous to yeast silent information regulator 2 (Sir2) and widely expressed in normal tissues in mammary animals. Up to now, seven members have been identified in human (SIRT1–7) and possess nicotinamide adenine dinucleotide (NAD+)-dependent lysine deacetylase (SIRT1, SIRT2, SIRT3, SIRT5, SIRT6, and SIRT7) and mono-ribosyltransferase (SIRT4 and SIRT6) activities [7–14]. Recently, SIRT5 was shown to be a NAD+-dependent protein lysine demalonylase and desuccinylase [15]. The sirtuins play essential roles in cellular physiology including cell metabolism, cell cycle, cell division, and transcriptional regulation and are also involved in the pathogenesis of series of diseases such as metabolic diseases [16], neurodegenerative diseases [17], cardiovascular diseases [18], and aging [19]. Some previous studies have been performed to explore the clinical value and mechanism of sirtuins in gastric cancer. However, the results are inconsistent and not all the seven sirtuins are investigated and compared.

Kaplan-Meier plotter (KM plotter), an online tool, can be utilized to analyze correlations of individual genes with prognosis of patients. This database was initially established using data from a group of 1,809 breast cancer patients [20, 21]. Later, this database also included gene expression data of a total of 1,065 gastric cancer patients derived from NCBI GEO datasets GSE14210, GSE15459, GSE22377, GSE29272, GSE51105, and GSE62254. In this study, we used datasets GSE15459 and GSE62254 to explore the associations of sirtuins with clinicopathological parameters and used KM plotter database to determine the prognostic role of individual sirtuins in human gastric cancer.

Correlations of sirtuins with clinicopathological parameters in GC

The associations of sirtuins with the clinicopathological parameters of the patients with GC were firstly explored. We downloaded the datasets, GSE62254 and GSE15459, from NCBI GEO database. Both datasets were consisted of relative large cohort of GC patients and have also been included in the KM plotter database. In GSE62254, SIRT1 and SIRT2 exerted no associations with the clinical features, SIRT3 was associated with T stage, SIRT4 was associated with pStage, SIRT5 was associated with T stage, SIRT6 was associated with age, M stage, and pStage, and SIRT7 was associated with Lauren classification, N stage, and pStage (Table 1). In GSE15459, significant associations were found between Lauren classification and SIRT7, pStage and SIRT2, and pStage and SIRT3 (Table 2). In addition, GSE62254 and GSE15459 were also integrated to investigate the correlations of sirtuins with clinicopathological parameters in GC. The results suggested SIRT4, SIRT6, and SIRT7 were associated with Lauren classification, and SIRT3-5 were associated with pStage (Table 3). Meanwhile, the KM plotter database also included gene expression profile of normal/adjacent tissue from 57 cases. Compare with the normal/adjacent tissues, SIRT2-6 expression in GC cancer tissues was lower while SIRT1 and SIRT7 had no difference (Supplementary Table 1). However, the controls were rare and not each separate dataset was consisted of controls, and the results should further verified.

Table 1: Sirtuins and clinicopathological parameters in patients with GC (GSE62254)

Table 2: Sirtuins and clinicopathological parameters in patients with GC (GSE15459)

Table 3: Sirtuins and clinicopathological parameters in patients with GC (integrated analysis of GSE62254 and GSE15459)

Correlations of sirtuins with OS in GC in overall 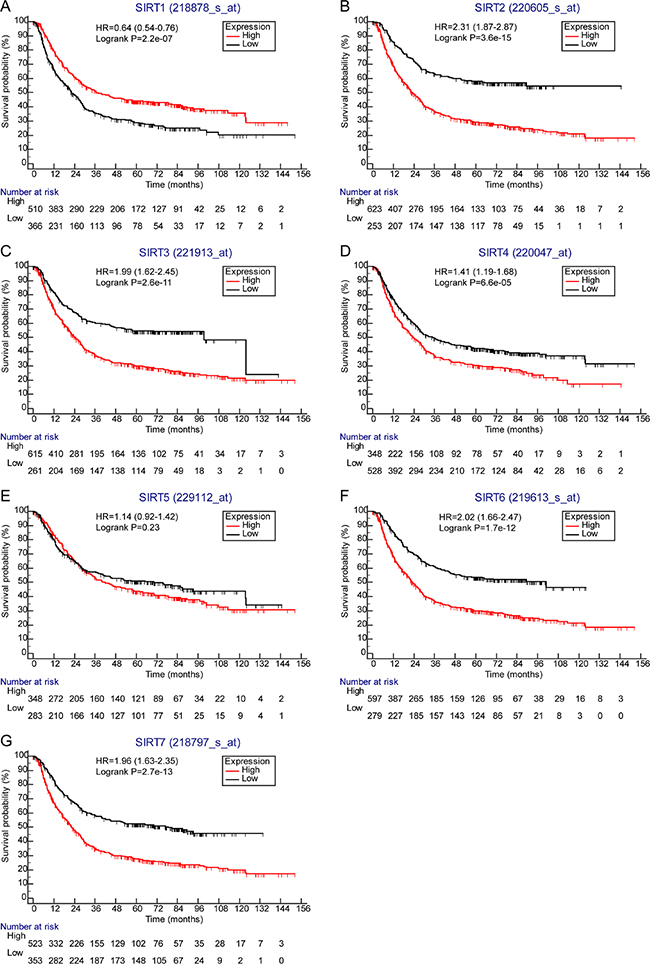 Table 4: Correlations of sirtuins with OS in GC in overall

Table 5: Correlations of sirtuins with OS in GC stratified by gender

Table 6: Correlations of sirtuins with OS in GC stratified by stages

Table 7: Correlations of sirtuins with OS in GC stratified by lauren classification

Table 8: Correlations of sirtuins with OS in GC stratified by differentiation

Table 9: Correlations of sirtuins with OS in GC stratified by treatment

Table 10: Correlations of sirtuins with OS in GC stratified by HER2 status

In addition, the online database also included the first progression (FP) information of the GC patients, and the analyses results suggested that high expression of SIRT1 was associated with long FP time while high expression of SIRT2-4 and SIRT6-7 was associated with short FP time and no significant association was found between SIRT5 and FP in GC in overall (Supplementary Figure 1 and Supplementary Table 2).

Gastric cancer (GC) is main cause of cancer related death and presents high mortality rate among all digestive tract malignancies due to chemoradiotherapy resistance and distant metastasis. Thus it is crucial to reveal pathogenesis of GC and find novel prognostic strategies, early diagnostic tools, and effective therapeutic approaches. Here, we used an online database to explore the clinical value of sirtuins in predicting overall survival (OS) in GC.

Of all the seven sirtuins, SIRT1 was the most studied one in GC. A series of studies have investigated the associations of SIRT1 with OS in GC. Of which, four studies reported that high SIRT1 expression was associated with poor OS [22–25] while one study reported that there was a trend of association between SIRT1 with good OS [26]. A meta-analysis combing the previous studies suggested that high SIRT1 expression was closely linked with the 3-year OS (OR = 0.25, 95% CI = 0.16–0.39, P < 0.00001, fixed model) while it was not associated with 5-year OS (OR = 0.44, 95% CI = 0.15–1.28, P = 0.13, random model) [27]. In our study, we found that high expression of SIRT1 mRNA was favorable for OS (SIRT1: HR = 0.64, 95% CI = 0.54–0.76, P = 2.2E-07). The inconsistency of these results might be due to the heterogeneity of these studies such as sample size, cancer site, and cutoff value. Several meta-analyses have also been performed to evaluate the associations of SIRT1 with OS in other solid carcinomas. All the meta-analyses studies revealed a significant association between high SIRT1 with poor OS in these solid carcinomas including breast cancer [28], hepatocellular carcinoma [29], colorectal cancer [30], lung cancer [31, 32], liver cancer [32]. Wang et al. also have pooled all the eligible data of solid malignancies and identified the same conclusion [32]. Mechanism researches suggested that SIRT1 can counteract the activation of STAT3 and NF-κB to repress cell growth [33] and lead to G1-phase arrest via NF-κB/Cyclin D1 signaling in gastric cancer[34]. The previous studies suggested that SIRT1 was also the target of certain microRNAs such as miR-543 and miR-204. miR-543 can promote gastric cancer cell proliferation by targeting SIRT1[35] and miR-204 can down-regulate SIRT1 and revert SIRT1-induced epithelial-mesenchymal transition, anoikis resistance, and invasion in gastric cancer[36].

Up to now, there were three studies reporting the association of SIRT3 with OS in GC. The association was significant in two studies [38, 39] and insignificant in one study [40]. A meta-analysis has pooled the previous two studies and found increased SIRT3 expression was associated with better OS in GC, however, the total included cases were only 286 [41]. Our results suggested that high SIRT3 mRNA expression was associated with poor prognosis in GC (HR = 1.99, 95% CI = 1.62–2.45, P = 2.6E-11). The inconsistency needed to be verified in further studies with large scale of patients. Function studies revealed that SIRT3 plays dual role in GC development. Wang et al. reported that SIRT3 can inhibit cell proliferation in human gastric cancer through down-regulation of Notch-1 [42] whereas Cui et al. reported that SIRT3 can enhance glycolysis and proliferation in SIRT3-expressing GC Cells [43].

The study performed by Huang et al. suggested SIRT4 is associated with some clinicopathological features in GC but did not reported the association of SIRT4 with prognosis [44]. In the present study, we found that high SIRT4 mRNA expression exhibited a significant associations with Lauren classification, pStage, and OS in GC (OS: HR = 1.41, 95% CI = 1.19–1.68, P = 6.6E-05).

To investigate the associations of sirtuins mRNA levels with clinicopathological parameters, we downloaded gastric cancer mRNA profile data and corresponding clinical data from publicly available GEO database. GSE62254 and GSE15459 with large number of gastric cancer patient samples and complete clinical information were selected, which had been also included in the Kaplan-Meier plotter database. The clinical samples were stratified into two groups by sirtuins mRNA levels with the median as cut-off value. The Chi-square test or Fisher’s exact test were performed to explore the correlations between sirtuins expression and clinicopathological parameters. Statistical analyses were conducted with the software GraphPad Prism 6. P value less than 0.05 was considered statistically significant.

Then we used the Kaplan-Meier plotter (www.kmplot.com) to investigate the predictive value of mRNA expressions of sirtuins in overall survival in gastric cancer. Currently, the Kaplan-Meier plotter is capable to assess the effect of 54, 675 genes on survival of 10, 188 clinical cancer samples, including 4, 142 breast, 1, 648 ovarian, 2, 437 lung and 1, 065 gastric cancer patients[52]. Briefly, the seven sirtuins (SIRT1, SIRT2, SIRT3, SIRT4, SIRT5, SIRT6, and SIRT7) were entered into the database (http://kmplot.com/analysis/index. php?p = service and cancer = gastric) to obtain Kaplan-Meier plots in which the number-at-risk is indicated below the main plot. The Affy IDs of SIRT1-7 were 218878_s_at (SIRT1), 220605_s_at (SIRT2), 221913_at (SIRT3), 220047_at (SIRT4), 229112_at (SIRT5), 219613_s_at (SIRT6), and 218797_s_at (SIRT7), respectively. If the gene had multiple chip probe sets, JetSet best probe set was selected. The patient samples were divided into two groups according to the mRNA expression with auto select best cutoff value (high vs. low expression). The hazard ratio (HR) with 95% confidence intervals and log rank p value was calculated and displayed on the webpage. HER2 status was determined using the gene chip probe set 216836_s_at as described before [21].

This study was supported by the grants from the National Natural Science Foundation of China (No.81472940).