Renal cell carcinoma (RCC) is the most common malignant renal neoplasm, accounting for approximately 85% of kidney cancers [1, 2]. Most patients without metastases can be cured by nephrectomy alone. However, considerable patients have metastatic diseases at the time of diagnosis and nephrectomy is not usually curative for those patients [2, 3]. Until the last decade, immunotherapeutic agents (interferon-α and interleukin-2) had been the main treatment option for patients with metastatic RCC, despite marginal benefits and significant toxicities [4, 5].

With understanding of molecular mechanisms of carcinogenesis, treatment of RCC has dramatically changed. The molecular targeted agents such as sorafenib, sunitinib, axitinib, pazopanib, or temsirolimus are currently recommended with improved outcomes for patients with metastatic RCC [6–10]. However, most tumors eventually develop resistance and their survival benefits are still disappointing. Therefore, efforts to identify novel therapeutic targets and develop more effective targeted drugs are still required. c-Met has recently emerged as a possible therapeutic target in various tumors including RCC [11–13].

c-Met is the tyrosine kinase receptor for hepatocyte growth factor (HGF) and encoded by the proto-oncogene MET located on chromosome 7. The HGF-c-Met signaling pathway regulates multiple cellular functions, including differentiation, proliferation, and angiogenesis [14, 15]. Thus, dysregulation of c-Met and HGF has been implicated in the pathogenesis of cancers. It is related to molecular mechanisms of tumor cell proliferation and survival, invasion, and metastasis [16]. The enhanced expression of c-Met has been observed in various tumors, such as breast cancer [17], lung cancer [18], gastric cancer [19], colorectal cancer [20], cervix cancer [21], pancreatic cancer [22], and hepatocellular carcinoma [23]. Several meta-analyses in common tumors indicated that high c-Met expression was associated with a poor prognosis [17–23].

The expression of c-Met has also been observed in various cytomorphologic subtypes of RCC [24–39]. High c-Met expression has been associated with poor pathologic features and prognosis in many studies [24–26, 28–31]. However, most studies had a small number of patients, and there has been some conflicts regarding its clinicopathological impacts in RCC [27, 32–34, 38, 39]. Therefore, we performed this meta-analysis to evaluate the pathologic and prognostic roles of c-Met overexpression in patients with RCC.

Figure 1 shows flow diagram of search process. A total of 187 relevant studies were initially retrieved, but 171 of them were excluded after screening the titles and abstracts. Of the remaining 16 potentially eligible studies, 4 were further excluded by the inclusion criteria: two had no criteria for c-Met expression status [24, 25] and the others adopted too low cutoff values (< 10%) for high c-Met expression [26, 27]. Finally, 12 studies were included in the meta-analysis [28–39]. 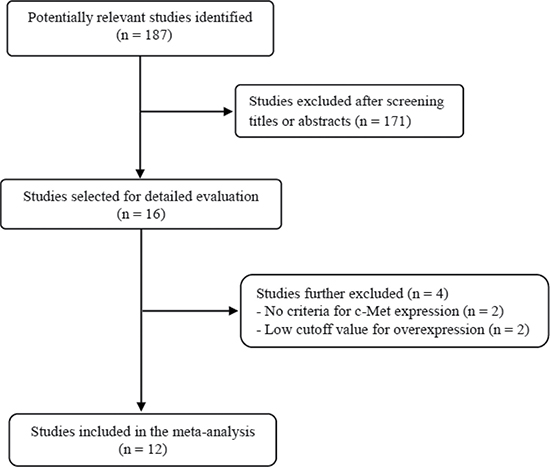 Table 1 summarizes the main characteristics and clinicopathological outcomes of the 12 included studies. All the studies were performed retrospectively. From the 12 studies, 1,724 patients were included in the meta-analysis. In one study, patients (n = 81) had chromophobe RCC [35]. Two small studies had patients (n = 96) only with papillary RCC (pRCC) [30, 33] and other three had patients (n = 752) only with clear cell RCC (ccRCC) [36, 38, 39]. Almost all patients had received renal surgery as primary treatment for RCC. In two studies [38, 39], patients were treated with sunitinib as a first-line therapy for metastatic RCC. Except for one [32], eleven studies used immunohistochemistry (IHC) to assess c-Met expression status [28–31, 33–39].

Table 1: Summary of the 12 included studies

There was a marked heterogeneity between the criteria used to dichotomize c-Met status (low c-Met or high c-Met). The criteria were briefly summarized in the Table 1. The rates of high c-Met expression were various, ranging from 16.7% [29, 36] to 80% [30].

From six studies [28–31, 35, 36], 496 patients were included in the meta-analysis of odds ratios (ORs) with 95% confidence intervals (CIs) for nuclear grade and/or depth of cancer penetration (pT stage). 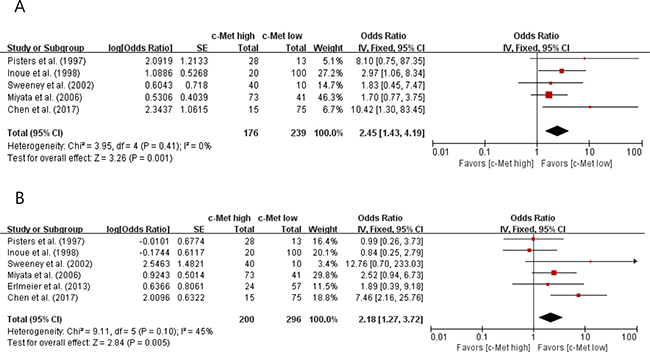 Figure 2: Forest plots of odds ratios for nuclear grade (A) and pT stage (B).

Figure 4: Forest plots of hazard ratios for overall survival in papillary RCC (A) and clear cell RCC (B).

Visual inspection of the funnel plots for nuclear grade, pT stage, and OS showed symmetry, indicating there were no substantial publication biases (Figure 5). 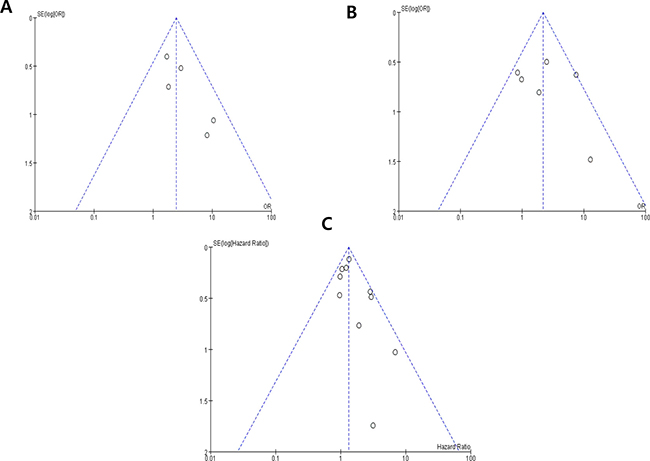 In this meta-analysis, we evaluated the pathologic and prognostic impact of c-Met overexpression in patients with RCC. The results show that high c-Met expression is associated with significantly worse pathological features and prognosis.

MET activation has been proven to play a critical role in the pathogenesis and progression of many tumor types [14–16]. Mechanisms of MET activation include mutations, amplification, and enhanced transcription [40]. Germline MET mutations have been identified in hereditary and sporadic pRCC [41]. c-Met was overexpressed in von Hippel-Lindau (VHL) RCC cells due to the upregulation of hypoxia-inducible factors [42]. In addition, VHL mutation and/or loss of heterozygosity have been associated with c-Met expression in ccRCC [25]. Besides pRCC and ccRCC, MET upregulation has also been detected in a rarer subtype, chromophobe RCC [35].

In the current meta-analysis, we included studies comparing the major pathological features (nuclear grade and pT stage) and cancer-specific survival outcome according to the c-Met expression status. Chen at al. had also performed the similar meta-analysis regarding clinicopatholigical impacts of c-Met expression in RCC [36]. They included studies with no criteria or low threshold for c-Met expression. In this study, however, we excluded two articles with no criteria for c-Met expression [24, 25] and another two with very low cutoff value (IHC staining in < 10% of tumor cells) for high c-Met expression [26, 27]. Compared with RCCs showing low c-Met expression, tumors with high expression showed significantly higher nuclear grade (OR = 2.45, P = 0.001) and pT stage (OR = 2.18, P = 0.005). In addition, patients with c-Met-high RCC showed significantly worse OS than those with c-Met-low tumor (HR = 1.32, P = 0.0009). Our findings indicate that high c-Met expression represent a potential adverse prognostic marker for patients with RCC. In the subgroup analyses, however, the OS failed to show statistically significant difference between patients with c-Met-high tumor and those with c-Met-low tumor in both pRCC (HR = 1.36, P = 0.48) and ccRCC (HR = 1.29, P = 0.34). Because the limited number of studies was included in the subgroup analyses, further studies are needed to evaluate the prognostic role of c-Met expression in the subtypes of RCC.

Several meta-analyses in other cancers have also demonstrated that high c-Met expression is an adverse prognostic marker for survival [17–23]. Thus, inhibition of c-Met/HGF pathway may provide an effective therapeutic strategy for cancers with c-Met overexpression [43]. Based on the scientific rationale to target c-Met, various c-Met inhibitors have been investigated in a variety of cancers, including RCC [12, 13, 44–49]. Cabozantinib is an oral inhibitor of tyrosine kinases including MET, VEGFR, and AXL. The randomized phase 3 METEOR trial compared the efficacy and safety of cabozantinib versus the mTOR inhibitor everolimus in patients with advanced RCC who progressed after previous VEGFR tyrosine-kinase inhibitor treatment [49]. Compared with everolimus, cabozantinib significantly prolonged OS (median 21·4 vs. 16·5 months, HR = 0.66 [95% CI: 0·53–0·83], P = 0·00026) and progression-free survival (median 7.4 vs. 3.9 months, HR = 0·51 [95% CI: 0·41–0·62], P < 0·0001). Based on these results, the U. S. FDA approved cabozantinib for patients with advanced RCC who have received prior anti-angiogenic therapy. In a phase II study with RCC, interestingly, therapeutic response of foretinib (a multi-kinase inhibitor targeting c-Met, VEGF, RON, AXL, and TIE-2 receptors) was closely associated with the germline MET mutations [12]. In addition, the efficacy of c-Met-targeting agents has been associated with high c-Met expression in non-small-cell lung cancer and hepatocellular carcinoma [46, 47]. These results suggest that cancers showing high c-Met expression may be good candidates for c-Met inhibitors.

Our study has several inherent limitations. First, the meta-analysis included a small number of studies. Second, all the studies were retrospectively performed. Third, as we mentioned above, the studies used different IHC methods (antibodies, detection kits, tissue samples-whole slide or tissue microarray, staining sites-cytoplasm or membrane) for assessing c-Met expression. In addition IHC criteria to stratify c-Met status were also various among studies. Fourth, because of limited information in most studies, we could not consider the impact of systemic therapies that would have inevitably affected the OS. Finally articles published only in English were included, which might bias the results.

In conclusion, our results show that c-Met overexpression is significantly associated with poor pathological features and prognosis. These findings indicate that high c-Met expression is a potential adverse prognostic marker for patients with RCC. However, larger studies using standardized methods and criteria are still needed to verify the prognostic roles of c-Met expression in various subtypes of RCC.

We performed this meta-analysis according to the Preferred Reporting Items for Systematic Reviews and Meta-Analyses (PRISMA) guidelines [50]. A systematic computerized search of the electronic databases PubMed and Embase (up to May 2017) was done. The search used the following terms: “c-Met” or “Met,” “hepatocyte growth factor receptor,” and “renal cell carcinoma.” The related articles function in the PubMed was also used to identify all related articles. The titles and abstracts of the retrieved studies were initially scanned to exclude irrelevant papers. Then, the potentially relevant articles were reviewed in full text, further excluding those that did not meet the inclusion criteria of this meta-analysis.

The required data were collected independently by two investigators (BJK and JHK). If these two authors did not agree, the other investigator (HSK) was consulted to resolve the discrepancies.

The following data were recorded from all eligible studies: the first author’s name, publication year, country, histology, nuclear grade, pT stage, methods to test c-Met expression, antibody and detection kit for IHC, number of patients, treatment, cutoff values adopted to dichotomize c-Met expression as ‘high’ or ‘low’, and HR with 95% CI for OS and OR with 95% CI for pathological features.

Statistical values were obtained directly from the original articles. When OR or HR with 95% CI were not provided, the Engauge Digitizer (version 9.1) was used to estimate the needed data from the results and Kaplan-Meier curves. The strength of the association between c-Met overexpression and nuclear grade or pT stage was shown as ORs with their 95% CIs. The effect size of OS was pooled through HR with its 95% CI. The heterogeneity across studies was tested by the Q statistic and the I2 inconsistency test. The fixed-effects model (Mantel–Haenszel method) was selected for pooling homogeneous outcomes when P ≥ 0.1 and I2 ≤ 50%, whereas the random-effects model (DerSimonian–Laird method) was applied for pooling heterogeneous outcomes when P < 0.1 and I2 > 50%. The RevMan (version 5.2) was used to combine data and report outcomes. All reported P-values were two-sided and P < 0.05 was considered statistically significant. Publication bias was assessed graphically by the funnel plot method [51].