Cisplatin is a common used chemotherapeutic drug for the treatment of laryngeal cancer. However, drug-resistance is a major obstacle in platinum-based chemotherapy for laryngeal cancer. Recent studies have demonstrated that dysregulation of microRNAs (miRNAs) is responsible for chemoresistance in multiple cancers including laryngeal cancer, but the potential mechanisms are required to be explored. In the present study, we constantly exposed the laryngeal cancer cell line Hep-2 with cisplatin to establish a cisplatin-resistant laryngeal cancer cell model (Hep-2/R). We found that Hep-2/R cells exhibited obvious resistance to cisplatin compared to the Hep-2 cells. However, overexpression of miR-26b significantly decreased the half maximal inhibitory concentration (IC50) of cisplatin to Hep-2/R. Mechanically, miR-26b in Hep-2/R decreased the expression of ATF2, and thus inhibiting the phosphorylation of ATF2 and formation of cellular ATF2-c-Jun complex induced by cisplatin. As the results, Hep-2/R cells failed to overexpress the Bcl-xl which is a key anti-apoptotic protein under the cisplatin treatment. Therefore, overexpression of miR-26b was found to be able to promote mitochondrial apoptosis induced by cisplatin.

Cisplatin is a common used chemotherapeutic drug for the treatment of cancers including laryngeal cancer [6, 7]. It acts as the cytotoxic agent in cancer cells by damaging DNA and inducing apoptosis. Mechanically, cisplatin in cancer cells binds to nitrogen atoms of DNA base, and thus forming the cross-link with cellular DNA. DNA damage may trigger DNA repair processes, and the failure of which may trigger apoptosis in cancer cells [8-10]. Although cisplatin treatment may achieve satisfactory effects at the beginning, long-term exposure to cisplatin may induce acquired drug resistance in laryngeal cancer [6, 11, 12].

MicroRNAs (miRNAs) are endogenous and non-coding RNAs with single chain of 18#x007E;25 nucleotides in length [13, 14]. Generally, miRNAs suppress gene expression by binding to their target mRNA at the 3′-untranslated region (3′ UTR), and thus they are considered as the important negative regulators of gene expression in cancer cells. It has been demonstrated that dysregulation of miRNAs is required in tumorigenesis and tumor development [15-17]. Furthermore, Aberrant expression of miRNAs is found to induce chemoresistance in various cancers including laryngeal cancer [18-20]. The present study demonstrates that reduction of miR-26b is associated with chemoresistance in cisplatin-resistant laryngeal cancer cell model, and recovery of miR-26b is able to decrease this cisplatin resistance by targeting ATF2.

To study the acquired cisplatin resistance in laryngeal cancer, we established the cisplatin-resistant Hep-2 cells (Hep-2/R) by constantly exposure with cisplatin. Results of MTT assays showed that sensitivity of Hep-2/R cells was significantly lower than their corresponding Hep-2 cells. Half maximal inhibitory concentration (IC50) of cisplatin to Hep-2/R was increased about 6 fold compared to the Hep-2 cells (Figure 1A). On the other hand, we found the significant difference of miR-26b expression between Hep-2/R and Hep-2. Expression of miR-26b was significantly decreased in Hep-2/R cells compared to the Hep-2 cells (Figure 1B). We therefore investigated the association between miR-26b and cisplatin resistance in Hep-2/R. As transfection with miR-26b mimics significantly recovered the cellular level of miR-26b in Hep-2/R (Figure 1C), we subsequently performed MTT assays to evaluate the effect of miR-26b on cisplatin sensitivity in Hep-2/R. In addition, as 10 μM cisplatin only induced slight cell death of Hep-2/R, we chose this concentration of cisplatin for co-treatment with miR-26b in the following experiments. As shown in Figure 1D, recovery of miR-26b significantly enhanced the effect of cisplatin on killing Hep-2/R, whereas inhibition of miR-26b decreased the sensitivity of routine Hep-2 cells to cisplatin. Specifically, transfection with miR-26b decreased the IC50 of cisplatin to Hep-2/R by about 68% compared to the control miRNA (miR-C) group. On the other hand, knockdown of miR-26b increased the IC50 of cisplatin to Hep-2/R by about 3.77 fold compared to the control group (Figure 1E). In addition, we next tested whether miR-26b reduced the cross-resistance of Hep-2/R to carboplatin and oxaliplatin. As shown in Figure 1F, transfection with miR-26b was able to sensitize Hep-2/R cells to either carboplatin or oxaliplatin. These data suggested that aberrant expression of miR-26b may be responsible for acquired resistance to platinum-based chemotherapeutic agents in laryngeal cancer, which can be weakened by recovery of miR-26b. 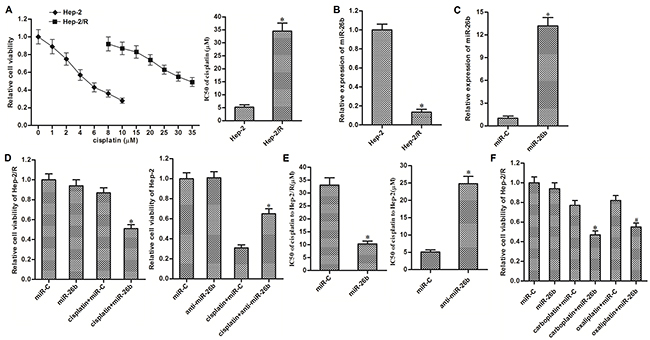 To search the potential target of miR-26b, public databases of TargetScan (www.targetscan.org), miRanda (http://www.microrna.org) and PicTar (http://pictar.mdc-berlin.de) were used. We observed that mRNA 3’ UTR of activating transcription factor 2 (ATF2) contained putative binding sequences paired with miR-26b (Figure 2A). Furthermore, ATF2 in Hep-2/R was overexpressed compared to the Hep-2 cells (Figure 2B). It suggested that ATF2 is the target of miR-26b in Hep-2 and Hep-2/R. To test whether miR-26b regulated ATF2 expression in Hep-2 and Hep-2/R, these cells were transfected with miR-26b mimics before detecting the expression of ATF2 by western blot analysis. As shown in Figure 2C, protein level of ATF2 was obviously decreased in both Hep-2 and Hep-2/R cells after they were transfected with miR-26b. Moreover, results of luciferase reporter assay showed that co-transfection with miR-26b decreased the luciferase activity of reporter contained wild but not the mutant ATF2 3’UTR (Figure 2D). Token together, these results demonstrated that miR-26b targeted ATF2 in Hep-2 and Hep-2/R cells. 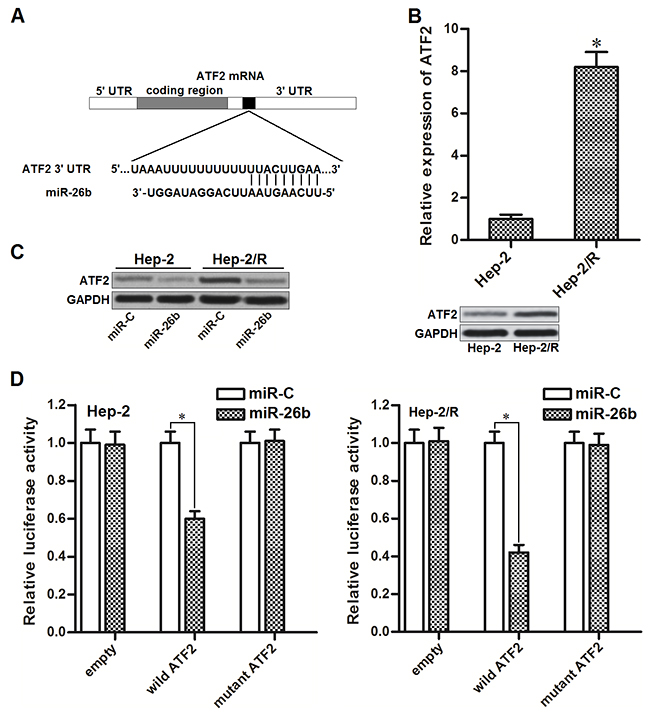 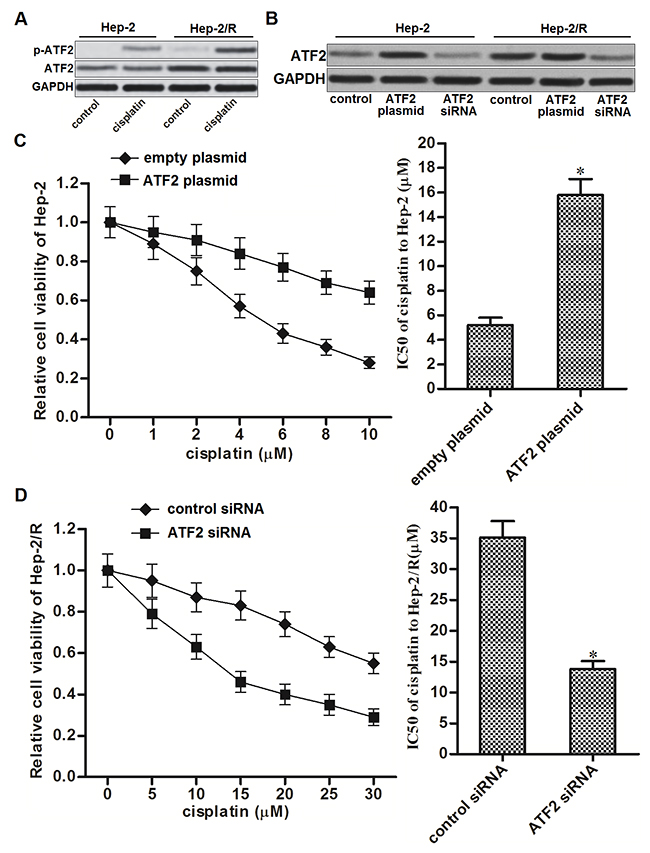 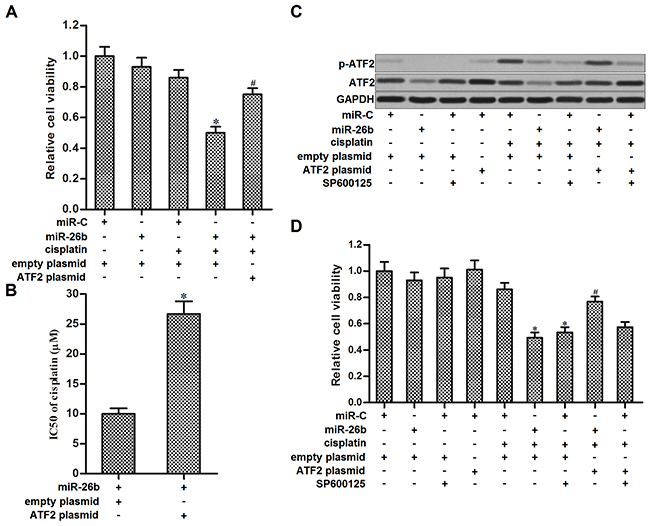 ATF2 is a common co-activator with c-Jun [23]. As cisplatin induced significantly higher level of phosphorylated ATF2 in Hep-2/R compared to the Hep-2 cells (Figure 3A), we observed more significant interaction with ATF2 and c-Jun in Hep-2/R cells treated with cisplatin (Figure 5A). Subsequently, we observed that cisplatin induced obviously higher level of B-cell lymphoma-extra large (Bcl-xl) in Hep-2/R compared to the Hep-2 cells (Figure 5B). It may because heterodimers of ATF2 and c-Jun promote the expression of Bcl-xl which is an anti-apoptotic protein [24]. However, we found that recovery of miR-26b in Hep-2/R inhibited the interaction with ATF2 and c-Jun (Figure 5C). As the downstream, miR-26b inhibited the expression of Bcl-xl in cisplatin-treated Hep-2/R (Figure 5D). Bcl-xl is an pro-survival against mitochondrial apoptosis [25]. In Hep-2/R cells, we observed that recovery of miR-26b obviously promoted the release of cytochrome c and Smac/DIABLO which were the mitochondria-derived apoptotic inducers into the cytoplasm (Figure 5E). As the results, combination with cisplatin and miR-26b induced significant activation of caspase-9, -7 and -3 (Figure 5F), followed by apoptosis occurrence (Figure 5G). These results demonstrated that recovery of miR-26b was able to reverse the apoptotic resistance in cisplatin-treated Hep-2/R. 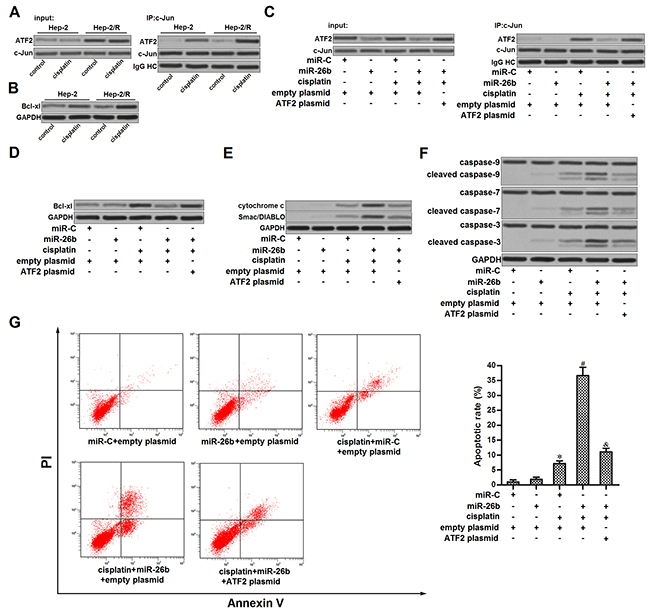 Figure 6: Overexpression of miR-26b reverses cisplatin resistance of Hep-2/R in vivo. (A) Mice were inoculated with miR-26b-overexpressed or control Hep-2/R cells. Subsequently, they were received cisplatin treatment with equal dose (2 mg/kg). The final xenografts were separated and weighted. *P<0.05 vs. LV-control group. #P<0.05 vs. Cisplatin+LV-control group. (B) Cells from xenografts were purified by using collagenase type III. Phosphorylation of ATF2 in these cells was evaluated by western blot analsyis. (C) Interaction with ATF2 and c-Jun in xenograft was evaluated by co-immunoprecipitation assays. (D) Expression of Bcl-xl in xenograft was evaluated by western blot analsyis.

miR-26b has been reported to act as a negative regulator for tumorigenesis and tumor proliferation, invasion and migration [26-28]. Therefore, reduction of miR-26b expression correlates with poor clinical outcome of cancer patients [29, 30]. Furthermore, recent studies demonstrate that reduction of miR-26b is responsible for chemoresistance in some cancers such as nasopharyngeal carcinoma, hepatocellular carcinoma and lung cancer. Overexpression of miR-26b sensitizes these cancer cells to cisplatin and doxorubicin [31-33]. These previous reports suggest that miR-26b is a suppressor for chemoresistance. However, the potential mechanisms is still needed to be explored in cancers, especially in laryngeal cancer.

Cisplatin-induced damage of DNA induces mitochondrial apoptosis, which can be inhibited by overexpression of anti-apoptotic family proteins such as Bcl-xl. Phosphorylated ATF2 can interact with c-Jun which is a nuclear transcription factor to promote the expression of pro-survival protein of Bcl-xl, and thus inhibiting mitochondrial apoptosis [25, 39, 40]. We found that recovery of miR-26b in cisplatin-resistant laryngeal cancer inhibited interaction with ATF2 and c-Jun by decreasing the cellular level of ATF2. Subsequently, miR-26b abolished cisplatin-induced overexpression of Bcl-xl and thus promoting the mitochondrial apoptosis in these cisplatin-resistant laryngeal cancer cells underwent cisplatin treatment.

Transfected Hep-2 and Hep-2/R cells were seeded into 96-well plates overnight before treatment with various concentrations of cisplatin for 48 h. Subsequently, MTT assays were performed to measure the cell viability of them. Half maximal inhibitory concentration (IC50) of cisplatin to Hep-2 and Hep-2/R was determined according to the cell viability curves.

Treated Hep-2 and Hep-2/R cells were lysed with RIPA buffer (Cell Signaling Technologies, USA) on ice for 30 min. Supernatant of cell lysate were incubated with primary antibody of c-Jun (Santa Cruze, USA) at 4 °C overnight. Subsequently, the supernatant were mixed with protein G agarose beads for 2 h at 4°C. Immunoprecipitates were washed three times with RIPA buffer for the following western blot analysis.

Total proteins in Hep-2 and Hep-2/R cells were extracted by using RIPA lysis buffer on ice for 30 min. 50 μg total proteins were separated with SDS-PAGE before transferring to a nitrocellulose membrane. The membrane was then blocked with skimmed milk and incubated with primary antibody of ATF2, p-ATF2, c-Jun, Bcl-xl, cytochrome c, Smac/DIABLO, caspase-9, caspase-7, caspase-3 and GAPDH (dilution 1:200, Santa Cruze, USA) at 4 °C overnight. Subsequently, the membrane were labeled with HRP-conjugated secondary antibodies (dilution 1:5000, Santa Cruze, USA) for 2 h at room temperature. Proteins on the membrane were probed by using an enhanced chemiluminescent substrate (Thermo Fisher Scientific, Inc, USA).

Recombinant lentivirus contained miR-26b precusor sequence (LV-miR-26b) were purchased from the Shanghai Genechem Co., Ltd. (Shanghai, China). Hep-2/R cells were transfected with LV-miR-26b or control lentivirus (LV-control) for preparing to inoculation on mice. Four-week-old female BALB/c nude mice (Shanghai Super-B&K Laboratory Animal Corp., Ltd, Shanghai, China) were subcutaneously injected with 5×106 prepared Hep-2/R cells. Mice were treated with cisplatin i.p. twice a week (2 mg/kg) before sacrifice on day 28 post-injection. Tumor tissues were then resected and weighted. Cells from the tumor tissues were digested by using collagenase type III to detect the expression of ATF2 and Bcl-xl in these cells. Our experimental protocols and animal care were approved by the Animal Care Committee of The Second Affiliated Hospital, Harbin Medical University.

Experiments were repeated at least 3 times and the experimental data were represented as mean ± SD. Differences between groups were analyzed by using SPSS 15.0 with Two-tail Student’s t test and ANOVA methods. P<0.05 was considered to be statistically significant.