Methods: We isolated lymphocytes from umbilical cord vein blood in 6 GDM patients and 6 controls and examined the differences of RNA by RNA sequencing. qRT-PCR and western blot were used to measure mRNA and protein changes. Bisulfite genomic sequencing PCR was applied to detect DNA methylation.

Results: We found more than 400 genes were differentially regulated in the lymphocytes of umbilical cord blood from GDM patients and these genes were mainly enriched in immune system and endocrine system, which relate to mitochondrial dysfunction and insulin resistance. MCAT closely related with PTPN1 (Protein Tyrosine Phosphatase, Non-Receptor Type1) and STAT5A (Signal Transducer And Activator of Transcription 5A), which were all increased in umbilical cord blood from GDM patients. Increase in MCAT may be due to decreased MCAT DNA methylation.

Conclusion: MCAT and its network with PTPN1, STAT5A are regulated in umbilical cord blood affected by maternal intrauterine hyperglycemia.

It has been well documented that early-life environment plays an important role in adult health [1, 2]. Gestational diabetes mellitus (GDM), a common pregnancy complication, affects up to 28% of all pregnancies and contributes to the long term metabolic derangements both in mother and child [3, 4]. Perturbations in glucose and lipid metabolism may manifest early in children exposed to intrauterine hyperglycemia [5-7]. Although many studies have investigated the correlation between intrauterine hyperglycemia and the incidence of diabetes in offspring, the mechanisms of maternal intrauterine hyperglycemia induced offspring diabetes remain unclear.

Insulin resistance is the primary cause of type 2 diabetes and several factors have been proposed to explain the mechanisms of insulin resistance, such as lipotoxicity, inflammation, oxidative stress and mitochondrial dysfunction [8-10]. Mitochondrial dysfunction from pharmacological treatment or genetic manipulation has close relationship with insulin resistance [11-13]. Malonyl-CoA-acyl carrier protein transacylase (MCAT) is closely associated with FASII pathway of fatty acid biosynthesis in mitochondria [14]. The first committed step of fatty acid biosynthesis is the conversion of acetyl-CoA to malonyl-CoA by an ATP dependent acetyl-CoA carboxylase followed by the conversion of malonyl-CoA to malonyl-ACP through MCAT [15, 16]. MCAT overexpression can be used to improve fatty acid production by increasing the malonyl-ACP availability, and MCAT gene whole body knockout manifests primarily as a lipoylation defect, leading to decreased body weight, loss of white adipose tissue and energy disequilibrium [17]. However, specific roles of MCAT in insulin resistance are still unknown and need to be determined.

Herein we investigated the alteration of umbilical cord blood MCAT levels in offspring exposed to intrauterine hyperglycemia, and explored the network of MCAT in the mechanisms of insulin resistance. We hypothesized that MCAT expression in the umbilical cord blood from GDM patients would be increased, and the dramatically changed proteins in the network of MCAT may contribute to insulin resistance in the offspring.

By RNA sequencing, we found that there were 460 differentially expressed genes identified in the umbilical cord blood lymphocytes between normal pregnant women and GDM patients. Of those, 248 genes were down-regulated while 212 genes were up-regulated in the umbilical cord blood lymphocytes from GDM patients compared with those from normal pregnant women (Figure 1A, 1B and Supplementary Table 1). 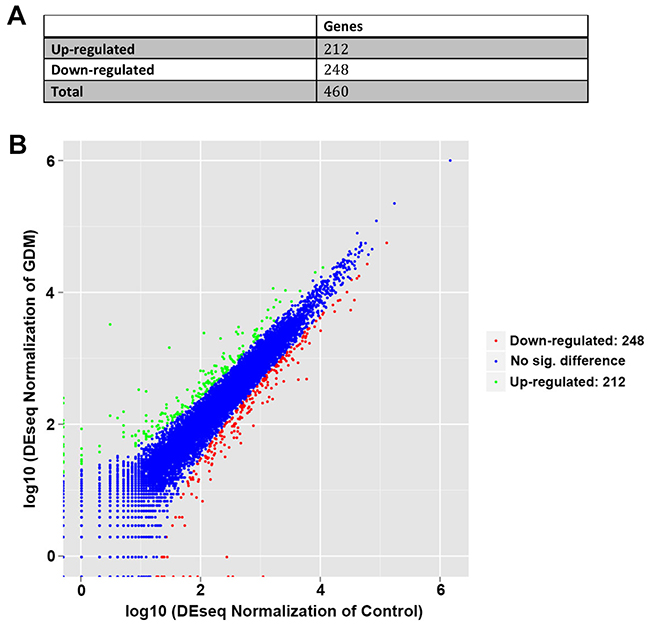 Through GO enrichment analysis, we found that these differential expressed genes were mainly involved in the biological process, cellular components and molecular function (Figure 2). In detail, the differential expressed genes were enriched in immune system process, response to stress and signal transduction. It is estimated that the genes involved in immune system, stress response and signal transduction were dramatically changed in the umbilical vein blood affected by intrauterine hyperglycemia. 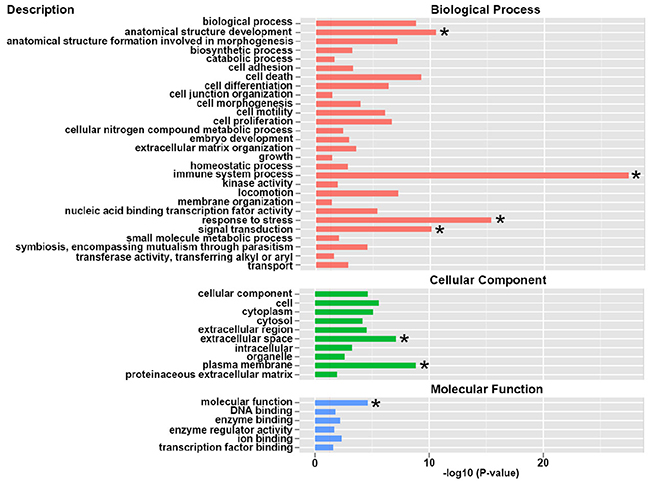 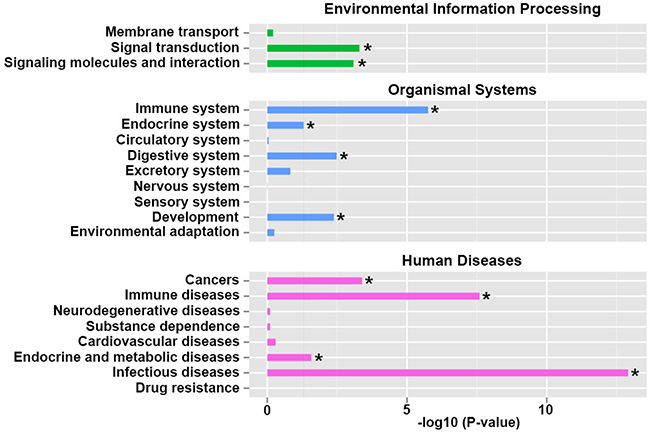 Figure 3: Kyoto Encyclopedia of Genes and Genomes (KEGG) pathway classification enrichment analysis of differentiated expressed genes. Functional annotation and metabolic pathway analysis were grouped in environmental information processing, organismal systems and human diseases. The results are shown as the negative logarithm of significance, which is a statistical score and is a measure of the likelihood of the genes in a given network being found together as a result of chance, as determined by a Fisher’s exact test.

From the RNA sequencing, we found out the network of MCAT (Figure 4A). MCAT gene expression was increased in the umbilical cord blood lymphocytes from GDM patients compared with that in normal pregnant women (Figure 4B). Many genes have the co-expression relationship with MCAT, such as KRTAP5-8, SAMM50, IL27, WNT16, ZNF142, PIH1D1, CBY1, SRM, PEX10, FASN, MRPS16. Some genes have physical interactions with MCAT, like ITGAV, SHMT1, PTPN1, SUMO2, TAP1, SPCS2, TMEM43, RAVER1, AGMAT and MRPS16. Besides, MCAT has shared protein domains with FASN (Table 1). This analysis was performed by GeneMANIA that find genes related to a set of input genes, using a very large set of functional association data. Association data include protein and genetic interactions, pathways, co-expression, co-localization and protein domain similarity. 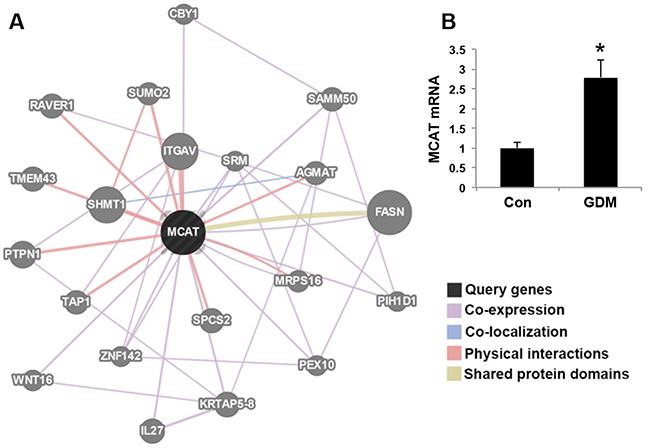 We found that some genes like PTPN1 (Protein Tyrosine Phosphatase, Non-Receptor Type1) and STAT5A (Signal Transducer And Activator of Transcription 5A), which were involved in insulin signaling pathways had close relationship with MCAT (Table 1), it is possible that the pathways of MCAT may be novel mechanisms as to the offspring insulin resistance affected by intrauterine hyperglycemia.

We further verified the MCAT network by Western blotting in umbilical cord blood from both normal control pregnant women and GDM patients. As shown in Figure 5A and Supplementary Figure 1, the protein expressions of MCAT, PTPN1 and STAT5A were increased in the lymphocytes of umbilical cord blood from GDM patients compared with those in healthy pregnant women, with significant differences by quantification (Figure 5B). These data suggest that the signaling pathways that involved MCAT, PTPN1 and STAT5A may contribute to offspring insulin resistance affected by intrauterine hyperglycemia. 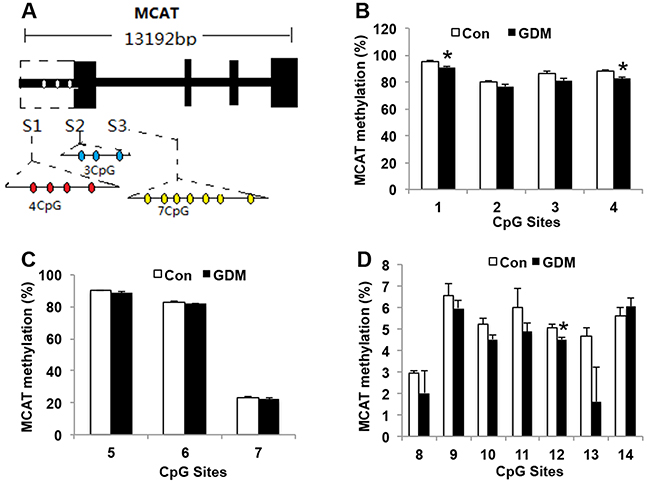 In the present study, we found that MCAT, PTPN1 and STAT5A were closely associated and all increased in the lymphocytes of umbilical cord blood from GDM patients compared with those in healthy pregnant women. Since PTPN1 and STAT5A were demonstrated to impair insulin signaling, MCAT and its network may be novel mechanisms as to the offspring insulin resistance affected by intrauterine hyperglycemia.

Through MCAT net analysis, we found that MCAT can physically interact with PTPN1 and co-expressed with STAT5A. PTPN1 has been shown to act as a negative regulator of insulin signaling by dephosphorylating the phosphotyrosine residues of insulin receptor kinase [18, 19]. Loss of PTPN1 activity causes enhanced insulin sensitivity and resistance to weight gain in mice [20]. Further, liver specific PTPN1 deficiency improves hepatic insulin sensitivity and whole body glucose homeostasis [21, 22]. Therefore, inhibition of PTPN1 has been proposed to be a potential therapy for obesity, insulin resistance and type-2 diabetes mellitus [23]. Besides, STAT5 activity in pancreatic beta cells influences the severity of diabetes in animal models of type 1 and 2 diabetes [24]. The STAT5A-mediated induction of pyruvate dehydrogenase kinase 4 expression by prolactin results in an inhibition of insulin-stimulated glucose transport in fat cells and contributes to insulin resistance [25]. Furthermore, intrauterine hyperglycemia induced offspring glucose intolerance by inhibiting pyruvate dehydrogenase (PDH) activity, along with increased PDH phosphorylation in the liver [26]. The increased PTPN1 and STAT5A in the lymphocytes of umbilical core blood in GDM mothers are proposed to contribute to offspring insulin resistance. Besides PTPN1 and STAT5A, some other genes like FASN, TAP1, which are also involved in insulin resistance [27, 28], have close relationship with MCAT. The potential relationship between MCAT and these genes will be explored in the future study.

In conclusion, MCAT and its crosstalk with PTPN1, STAT5A are increased in the umbilical cord blood affected by maternal uterine hyperglycemia. Inhibition of MCAT by pharmacological treatment in clinic may be a novel way to cure diabetes.

The umbilical cord blood was collected from both normal pregnant women and GDM pregnant women after delivering babies in International Peace Maternity and Child Hospital and was approved by Shanghai Jiaotong University Ethics Committee. Diagnosis for GDM: fasting blood glucose level greater than 5.1 mmol/l or 1 and 2 h blood glucose levels after the oral glucose tolerance test (OGTT) greater than 10.0 mmol/l and 8.5 mmol/l, respectively. OGTT was conducted within 24th-28th weeks of pregnancy. The blood was diluted with sterile PBS and poured carefully onto the Ficoll solution. The tubes were centrifuged at 400 g for 20 min and the ring with lymphocytes were harvested without touching the Ficoll. The lymphocytes were then washed twice with PBS and used for further study.

Genomic DNA was extracted from lymphocytes of umbilical cord blood in control and GDM groups. Bisulfite was converted using the EpiTect bisulfite kit (Qiagen, Valencia, CA) to deaminate cytosine to uracil according to the manufacturer’s instructions; 5-methyl-cytosine was protected from deamination. Analysis of the methylation status of the MCAT DMR was determined by cloning and sequencing of bisulfite-treated DNA. The purified PCR products were cloned using the pMD19-T vector system (TaKaRa, Dalian, China). The sequence obtained by cloning was analyzed with 3730 DNA Analyzer polymers (Applied Biosystems, Carlsbad, CA).

Cell preparations were sonicated in lysis buffer and 50 μg protein was resolved on a 8% SDS-PAGE gel and electroblotted onto PVDF membrane. Blots were then blocked in 5% nonfat milk containing 0.05% Tween-20, rinsed in PBS (pH 7.4), and incubated with the following antibodies: mouse monoclonal anti-MCAT (1:1000), rabbit monoclonal anti-PTPN1 (1:1000), rabbit monoclonal anti-STAT5A (1:1000) and rabbit polyclonal anti-GAPDH (1:1000). GAPDH was probed as a loading control. The immunoreactivity was visualized by enhanced chemiluminescence substrate system (ECL). Films were scanned and subsequently analyzed by measuring the optical densities of immunostained bands using an image-processing and analysis system (Bio-Rad, Hercules, CA).

The tool used for the differential expression analysis was DESeq, which is an R package to analyze count data from high-throughput sequencing assays such as RNA-Seq and test for differential expression. We used the software named MGI GO Term Finder to perform GO enrichment analysis, which was established to provide a common language to describe aspects of a gene product’s biology. The method of KEGG enrichment analysis was similar to GO enrichment analysis and performed the same arithmetic. We detected MCAT gene promoter region methylation pattern using pyrosequencing.

In this study, the data were presented as the mean ± SEM from multiple samples and each experiment was conducted at least three times. The representative immunoblot is presented. In the statistical analysis, two-tailed, unpaired Student’s t test was used in analysis of the data with significance P< 0.05.

Y.Z, J.Y conducted the experiments and analyzed the data. Y.Z and J.F designed the study and prepared the manuscript. All authors read and approved the final version of manuscript.

The authors declare that they have no conflicts of interest concerning this article.