Objective: In this study, we aimed to investigate the predictive effect of BRCA1, STMN1, MAPT and TUBB3 on the prognosis of patients with non-small cell lung cancer (NSCLC).

Methods: Seventy NSCLC patients who received platinum-based chemotherapy from June 2009 to July 2011 were enrolled. The protein and mRNA levels of BRCA1, STMN1, MAPT and TUBB3 were determined. Survival time of the patients with NSCLC was also calculated.

Conclusion: BRCA1 and STMN1 were independently predictors for prognosis of NSCLCs which received cisplatin-based adjuvant chemotherapy.

Lung cancer is one of the most frequent malignant neoplasm and it was the main cause of cancer-related death all over the world [1]. NSCLC accounts for approximately 85% of all lung cancer. Moreover, most of the patients diagnosed with NSCLC have advanced local invasion and/or distant metastases at the time of diagnosis. Despite of recent improvement in surgery, chemotherapy, radiotherapy techniques, the long-term time of NSCLCs is still not satisfied. According to previous studies, the 5-year survival rate of NSCLCs stayed at approximately 16% and was accompanied by high recurrence rate, it has no significant improvement during the last two decades [2–4]. The high morbidity and mortality of NSCLCs made a great threat to the health and life of populations.

Platinum and taxane were extensively used [5–8], and platinum-based double drug combination as a standard treatment for patients with a good performance status scale had been recommended by 2011 guidelines of the National Comprehensive Cancer Network (NCCN). Platinum agents bind to DNA and form complexes with DNA, thus inhibiting the cell cycle and promoting apoptosis [9]. Taxanes bind to tubulin and suppress spindle microtubule dynamics, which leads to cell cycle arrest in G2/M phase followed by apoptosis [10]. However, NSCLCs with similar clinical pathology characteristics exhibit considerable heterogeneity to chemotherapy in sensitivity and toxicity. Primary and secondary drug resistance is the major cause of the problem [11, 12].Therefore, it is crucial to investigate efficient markers that can predict sensitivity or toxicity tolerance to chemotherapy.

Previous studies have reported that various biomarkers such as excision breast cancer 1 (BRCA1), β-tubulin-III (TUBB3), microtubule-associatedprote in tau (MAPT) and Stathmin (STMN1), which were closely associated with the clinical effect of NSCLCs undergoing chemotherapy [13–16].

Platinum-induced apoptosis can be identified and repaired via the nucleotide excision repair (NER) and base excision repair (BER) pathways [17]. ERCC1 and BRCA1 are critical proteins in the NER pathway and act as rate-limiting enzymes [18]. Paclitaxel binds to TUBB3, thereby inhibiting the cell cycle and leading to cell cycle arrest in G2/M phase [19]. MAPT primarily functions as tubulin assembly and microtubule stabilization and it can bind to the paclitaxel-binding site on the inner surface of the microtubule [20]. STMN1 can modulate microtubule dynamics through preventing polymerization of tubulin and boosting destabilization and disassembly of microtubule during the interphase and late mitosis along cell cycle progression [21].

Analysis of biomarkers could predict the sensitivity/toxicity to chemotherapy, which is very important for precision medicine and is widely accepted. It could significantly improve the survival and/or quality of life of NSCLCs. Overall, these capable biomarkers had been demonstrated as prognostic and predictive markers in certain studies, but not in others [15–19]. Accordingly, the present prospective, randomized, non-interventional study was performed to verify the predictive value of BRCA1, TUBB3, MAPT and STMN1 in patients with NSCLC that received adjuvant platinum-based chemotherapy.

Our study included 70 NSCLC patients who received platinum and paclitaxel based chemotherapy. The expression level of STMN1, BRCA1, MAPT and TUBB3 was detected by immunohistochemistry. We also studied the effect of the target genes above on the survival time of the NSCLC patients. 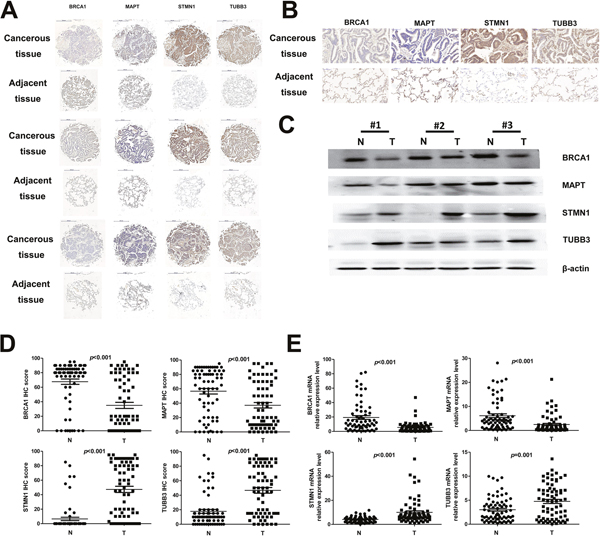 There were no significant differences in the expression of BRAC1, STMN1, MAPT and TUBB3 in different age groups 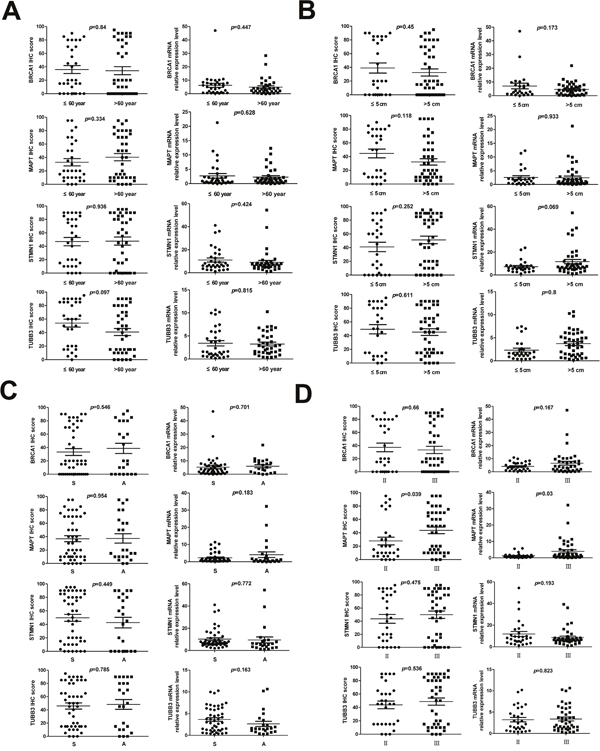 The tumor size had no significant effect on the expression of BRAC1, STMN1, MAPT and TUBB3

The expression level of BRAC1, STMN1, MAPT and TUBB3 in lung adenocarcinoma and squamous cell carcinoma showed no significant difference 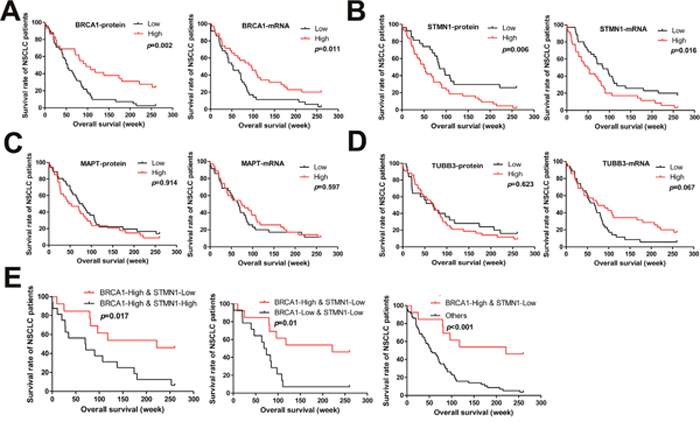 Figure 3: Kaplan–Meier curves with univariate analyses (log rank) of 70 NSCLC patients after surgical resection revealed 5-year survival. (A-D) Patients were grouped according to the expression of BRCA1, STMN1, MAPT and TUBB3 in the carcinomas, and subjected to follow-up investigations. The percent of surviving patients was plotted, BRCA1 (A), STMN1 (B), MAPT (C), TUBB3 (D). (E) The prognostic accuracy of BRCA1 combined with STMN1 is higher than that of either alone.

In the past decades, significant progress has been made in the detection and treatment of lung cancer. However, lung cancer remains high morbidity and mortality. NSCLC as the most common type of lung cancer has been widely studied in recent years. Platinum and paclitaxel are commonly used for NSCLC treatment [5–8]. However, the chemotherapy results of NSCLC patients are highly heterogeneous. The drug resistance of tumor is the main factor influencing the effect of chemotherapy [22]. Therefore, it is very necessary to find new biomarkers which can evaluate the sensitivity or toxic side effects of anticancerdrugs. The expression level of BRCA1, STMN1, MAPT and TUBB3 were reported to be closely associated with the clinical effect of patients undergoing chemotherapy [13–16]. This study investigated the correlation between the expression levels of BRCA1, STMN1, MAPT and TUBB3 and the clinical features of the patients. We also study the impact of the target genes expression level and the patients’ clinical features on the survival time of NSCLC patients.

Kaplan–Meier survival analysis showed that STMN1 positive was significantly (p=0.006) associated with a poorer prognosis of NSCLC patients who received postoperative adjuvant chemotherapy, which was consistent with our results. Reyes reported that high STMN1 expression was a marker for clinical outcome in endometrial cancer [23]. Bai showed that high STMN1 level was associated with chemo-resistance and poor prognosis in gastric cancer patients [24]. Ueyama announced that high expression of STMN1 is a strong prognosis marker in oral squamous cell carcinoma patients treated by docetaxel-containing regimens [25]. On the contrary, BRCA1 positive was correlated with a better prognosis of NSCLC patients who received postoperative adjuvant chemotherapy (p=0.002). Wang’s [26] study in NSCLC exhibited that patients with high BRCA1 expression had longer progression free survival (PFS) and overall survival (OS) Quinn’s [27] study showed that overall median survival for higher-BRCA1-expressing patients was found to increase following taxane-containing chemotherapy. The results suggest that NSCLC patients with BRCA1 negative or patients with STMN1 positive may have poorer prognosis and will need receiving more comprehensive treatment. However, multivariate Cox analysis indicated that BRCA1 was an independent predictor of 5-year survival rate of NSCLC patients (p=0.034), but STMN1 (p=0.141) was not.However, we found that the 5-year survival rate of NSCLC patients with BRCA1 positive and STMN1 negative was significantly higher than other patients (p<0.001, Figure 3).

The study was conducted from June 2009 to July 2011, paraffin-embedded specimen of 70 cases of NSCLC tissues and adjacent non-tumor tissues, in the Hanzhong 3201 hospital, Shaanxi Province. The demographic and clinicopathological parameters of patients were displayed in Table 1. All specimens included in this study were identified by the experienced pathologists. The histological classification and grading were performed according to thestandards of National Comprehensive Cancer Network (NCCN). All patients underwent surgical treatment and postoperative adjuvant chemotherapy (75 mg/m2 cisplatin plus 75 mg/m2 docetaxel or 500 mg/m2 pemetrexed chemotherapy every three weeks for four cycles). This study was approved by the Ethics Committee of Hanzhong 3201 hospital.

Each tissue specimen was evaluated independentlyby two pathologists, and eight random fields were used to assess the expression levels of BRCA1, STMN1, MAPT and TUBB3, and also to calculate an average score. In addition, the two pathologists were blinded to the clinical status of the patients. For each patient specimen, these biomarkers were assessed by distribution and intensity. The staining distribution of target proteins were evaluated with the percentage of stained cells, which was scored as 0-100 (low expression: 0-25, high expression: 26-100).

All statistical analyses were carried out using StatisticalProgram for Social Sciences (SPSS) software 17.0 (SPSSInc, USA). Paired t test was used to detect the expression of BRCA1, STMN1, MAPT and TUBB3 protein in cancer tissues and adjacent non-tumor tissues. The relationship between the expression level of target protein and the clinicopathological characteristics of the patients were analyzed by chi square test. Survival analysis was performed by Kaplan–Meier method and compared by log-rank test. Factors with significant influence on univariate analysis were further analyzed by multivariate Cox regression analysis. The minimum level of significance was established at p<0.05. Statistical analyses were performed using SPSS 19.0 software.

The study was approved by the ethics committee of 3201 hospital affiliated to Xi'an Jiaotong University.

All of the authors declared that they have no conflicts interest in relation to this study.