Gastric cancer ranks fifth among most malignant cancers and third among cancer related deaths worldwide [1]. China has the highest incidence of gastric cancer accounting for 35% of total gastric cancer cases worldwide with a high mortality rate of 25.16 cases per 100,000 [2]. Prognosis of locally advanced gastric cancer is poor with a 5-year overall survival (OS) rate of20-30% for surgery-only patients [3]. Neoadjuvant chemotherapy (NAC) is preferred for locally advanced gastric cancer patients since the release of the MRC Adjuvant Gastric Infusional Chemotherapy (MAGIC) trial results [4]. Many studies demonstrate that NAC reduces the size of gastric cancer lesions thereby decreasing tumor staging and increasing the chances for radical resection and survival while decreasing post-operative complications [5–9].However, standard regimen and courses of NAC are not yet established and prognostic factors associated with survival outcomes for patients treated with NAC followed by surgery remain unclear.

Table 1 shows patient and treatment characteristics. The median patient age was 53.0 years (range:32–77 yrs), and 48 of the 73 (65.8%) patients were male. While all73 patients received at least one cycle of NAC, 37 (50.7%) and 36 (49.3%) patients received doublet and triplet NAC regimen, respectively. Among the 73 patients, 50 (68.5%) and 20 (27.4%) patients showed tumor partial response (PR) and stable disease (SD), respectively. However, tumor response was not evaluated for 3 (4.1%) patients because 2 patients developed ileus and one patient missed assessment due to personal reasons. Of the 73 patients that had underwent NAC, 64 (87.7%) underwent complete resection with negative margins (R0), 5 (6.8%) underwent microscopic resection (R1) and 4 (5.5%) patients underwent resection with grossly positive margins (R2). While 51 (70.0%) patients received post-operative chemotherapy in our hospital, there was no record for 22 (30%) patients. Adjuvant chemotherapy (AC) regimen in 23 patients was the same as NAC. Eight(11%) patients received post-operative radiotherapy. Median follow-up period was 635 days (range 123 - 1962 days) with Aug 20, 2013as the cutoff date. At this time, 37 patients were still alive with 29 out of the 37 showing no documented progression.

* Tumor response to NAC was not evaluated for 3 patients; 2 of them developed ileus during treatment, and the other one missed assessment for personal reasons.

‡/§ vascular invasion and nervous invasion status were not reported for one patient. 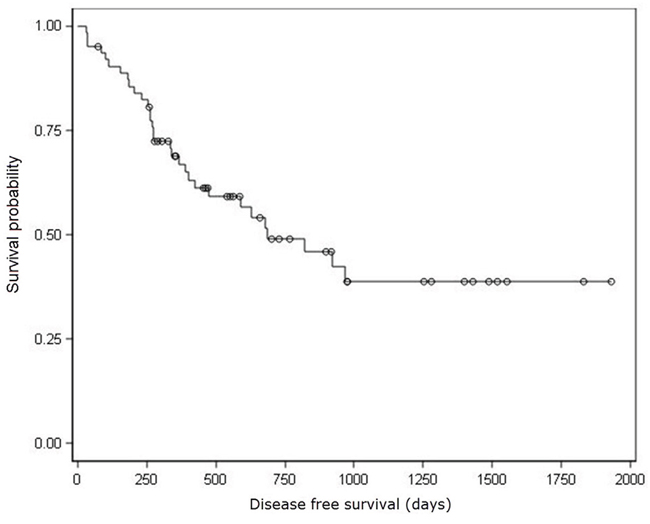 *NAs are not applicable; †NEs not estimated because of insufficient survival data. 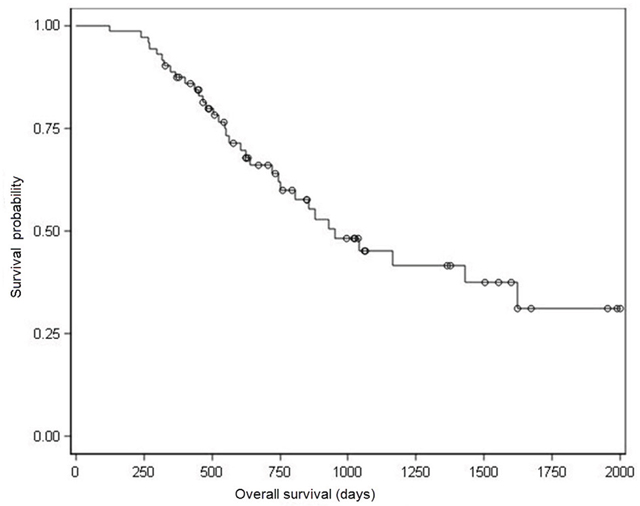 Figure 2: Kaplan–Meier analysis of overall survival. ○ Censored Patients. Median OS for all of these 73 patients was 930 days.

Patients with potentially resectable gastric cancer are treated with neoadjuvant chemotherapy to improve survival. However, a standard regimen is not clear. Several investigations have shown that patients that received NAC followed by surgery, age at diagnosis, post-treatment nodal status, diffuse-type histology, perineural invasion/vascular invasion and salvage surgery are associated with OS [10–13]. Our study demonstrated that clinical response (SD or PR) was not a significant prognosis factor for DFS or OS. One possible reason is that we enrolled only limited number of patients that underwent curative-intent surgery after NAC.

Metastatic lymph node ratio (NR) is an alternate prognostic factor instead of the number of lymph nodes (N in TNM staging) in GC because of the limited number of lymph nodes [18, 19]. Persiani R et al. showed that TRM (R means metastatic lymph node ratio) staging system had better prognostic power than the TNM system by reviewing 219 patients that underwent gastrectomy for node-positive (M0) cancer [20]. Posteraro B et al. retrospectively reviewed 110 patients that received curative-intent gastrectomy by the TRM staging and demonstrated that higher NR strongly predicted poor OS and DFS [21]. In the present study, NR was a prognostic factor for both DFS and OS in univariate analysis, but was in significant in multivariable analysis. However, post-treatment N stage showed association with DFS and OS in both univariable and multivariable analyses, consistent with the study by Fujitani et al.[10].Therefore, post-treatment N stage was a more reliable prognostic factor than metastatic lymph node ratio (NR) in locally advanced GC patients that received gastrectomy after NAC.

Our findings are limited because this was a retrospective study conducted in a single institution with few select patients (73 study subjects) with different pre- and post-operative chemotherapeutic regimens. Larger multi-center prospective studies are necessary to confirm our findings.

We retrospectively analyzed the outcomes of 73 consecutive patients with locally advanced gastric cancer that were treated with neoadjuvant chemotherapy followed by surgical resection between August 2007 and July 2012 at the National Cancer Center/Cancer Hospital, Chinese Academy of Medical Sciences & Peking Union Medical College, China. The procedures followed were in accordance with the ethical standards set by the independent ethnic committee of Cancer Hospital of Chinese Academy of Medical Sciences & Peking Union Medical College on human experimentation and the Helsinki Declaration. The patients were diagnosed with resectable advanced adenocarcinoma (gastric cancer) and completed at least one course of NAC with the tumor response evaluated by Response Evaluation Criteria in Solid Tumors (RECIST, version 1.0). All patients received gastrectomy, with D2 lymph-node dissection. The post-therapy node status including number of metastatic lymph nodes (N stage) and lymph node metastasis ratio (NR) were determined after examination. The extent of residual tumor was determined by the pathologist in our hospital to estimate the pathologic response to NAC. After surgery, patients received post-operative chemotherapy and/or radiotherapy based on the clinical status of individual patients. The patients followed up by regular clinic visits and phone calls.

Multivariate analysis of prognostic factors was performed by the stepwise Cox proportional hazard model with the variables identified as significant factors in the univariate analyses and hazard ratio (HR) and their95% confidence intervals (CIs) were calculated. A two-sided P < 0.05 was considered statistically significant.

All authors contributed equally to this work and agreed with the contents of the manuscript.