Prostate cancer (PCa) is one of the most common types of neoplasm in the Western world. In United States, prostate cancer is the most prevalent cancer, with 217,730 new cases predicted to occur in 2010 [1]. The etiology of PCa is still poorly understood, but exposure to hormones, infectious agents, or dietary carcinogens may contribute to inflammation of the prostate [2, 3]. Intraprostatic inflammation may affect the tissue microenvironment, promoting genetic damage, and driving cellular proliferation, which may lead to prostate carcinogenesis [4, 5]. Prior studies have suggested that family history is the most reproducible and significant risk factor. Men with a brother or father diagnosed with PCa were twice as likely to develop this cancer as men with no relatives affected [6].

Ribonuclease L (RNASEL), which is considered to be a tumor-suppressor gene, plays a significant role in the pathogenesis of prostate cancer through inflammation and infection. RNASEL is on chromosome 1q24-25 and encodes Ribonuclease L, a significant enzyme of the interferon-induced antiviral 2-5A system [7]. Mutation of RNASEL can lead to dysfunction of Ribonuclease L in regulating single-stranded RNA cleavage, cellular viral defense, and tumor suppressor activities, such as stress-mediated apoptosis and regulation of protein synthesis [8–9].

Extensive epidemiological studies had been conducted to explore the association between RNASEL polymorphism and prostate cancer risk. A G-to-A transversion at nucleotide position 1385 (rs486907), which results in a glutamine instead of arginine at amino acid position 462 (R462Q), is one of the most widely investigated polymorphisms in RNASEL. Nevertheless, the association between the RNASEL R462Q polymorphism and prostate cancer risk is controversial because of conflicting case–control studies. Therefore, in this meta-analysis from all eligible studies published to date [10–32], we used enhance statistical power to understand the effect of this variant.

A total of 22 articles (including 26 case–control studies) met all the inclusion criteria and were included (Figure 1). The genotype distribution of the control population was consistent with Hardy-Weinberg equilibrium (HWE) in 19 of the publications. Characteristics of the eligible studies are summarized in Table 1. In general, 11,522 prostate cancer patients and 10,976 control subjects with the RNASEL Arg462Gln polymorphism were evaluated. In the ethnic subgroups, 17 case–control studies were performed with European descendants, three with Asian descendants, and four with African descendants. We checked the Minor Allele Frequency (MAF) reported for the five main worldwide populations in the 1000 Genomes Browser: East Asian, 0.2421; European, 0.3708; African, 0.0666; American, 0.2233; and South Asian, 0.3016. The MAF in our analysis was 0.3034 and 0.2900 in the case and control group, respectively (Figure 2). Hospital-based controls were carried out in 15 of the studies. TaqMan real-time polymerase chain reaction (PCR), the classical genotyping method, was utilized in 10 comparisons. Five studies used the GoldenGate platform or Sequenom MassARRAY platform genotyping method. Six publications had genotype frequency information for familial and sporadic prostate cancer cases. 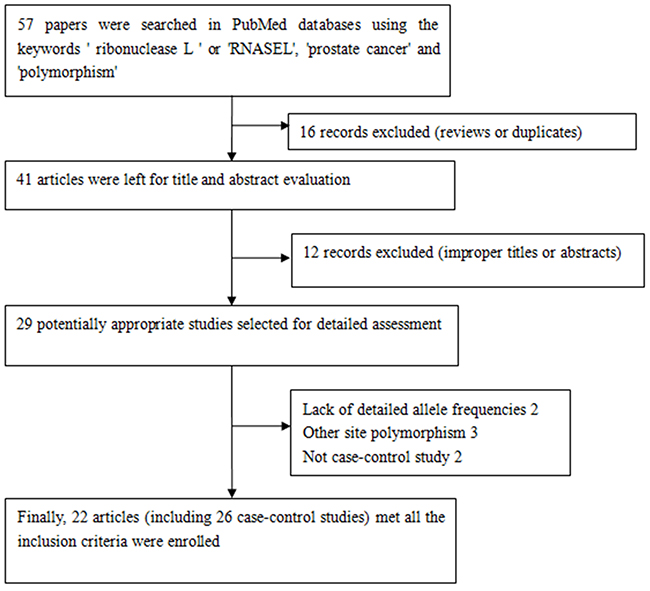 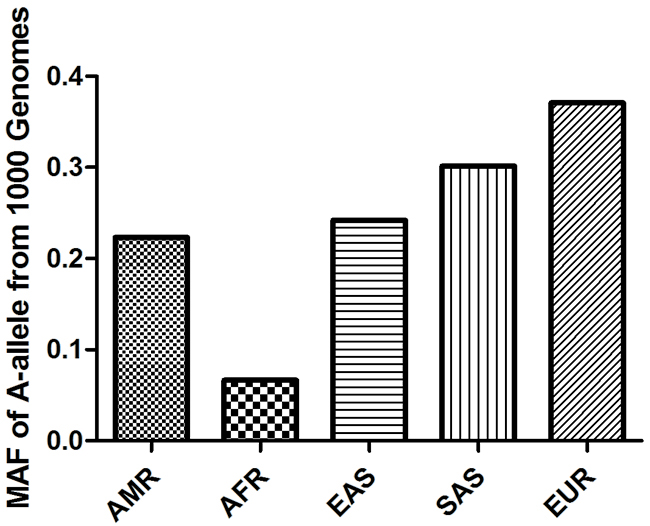 a Number of comparisons

b P value of Q-test for heterogeneity test(Pheter). 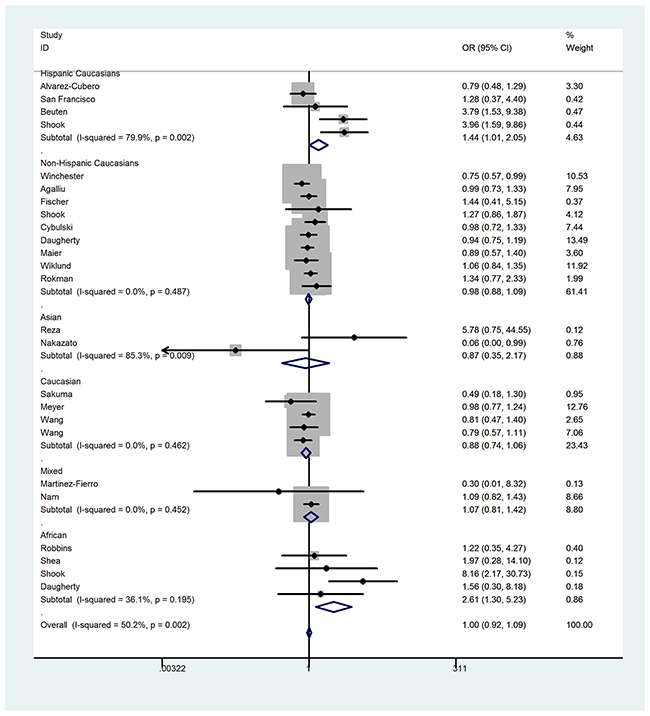 Figure 3: Forest plot of prostate cancer risk associated with RNASEL Arg462Gln polymorphism (recessive genetic model) in the stratified analysis by ethnicity. The squares and horizontal lines correspond to the study-specific OR and 95% CI. The area of the squares reflects the weight (inverse of the variance). The diamond represents the summary OR and 95% CI. Separate details were summarized in Table 1. 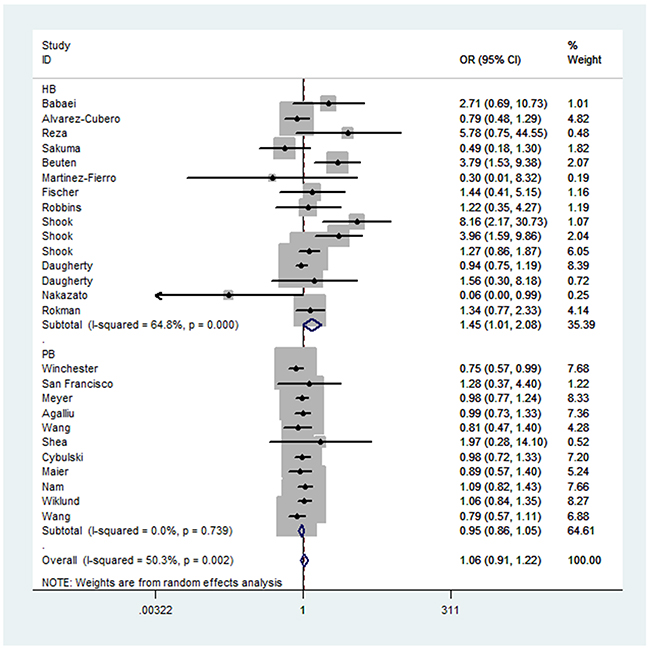 Figure 4: Forest plot of prostate cancer risk associated with RNASEL Arg462Gln polymorphism (recessive genetic model of AA vs. GA + GG) by source of control. The squares and horizontal lines correspond to the study-specific OR and 95% CI. The area of the squares reflects the weight (inverse of the variance). The diamond represents the summary OR and 95% CI.

Published studies have shown evidence that RNASEL is a constitutively expressed latent endo-ribonuclease that mediates proapoptotic and antiviral activities of the IFN-inducible 2-5A system [7–9]. Mutation carriers in the RNASEL gene have loss of heterozygosity and are deficient in functional RNase L activity [33]. However, previous reports showing association between RNASEL polymorphism and prostate cancer susceptibility are contradictory. The general goal of this pooled analysis is to quantitatively analyze previous studies to understand the true relationship between RNASEL polymorphism and prostate cancer. Here, previous case-control studies with information between the RNASEL polymorphism and different types of Caucasians (Hispanic and Non-Hispanic) were included. As a result, some new findings were observed in our meta-analysis.

Our results indicated that the RNASEL Arg462Gln polymorphism may be associated with increased prostate cancer in African descendants (under homozygote comparison and the recessive genetic model) and Hispanic Caucasians (under allelic contrast, homozygote comparison, and the recessive genetic model), but not in Asian descendants and Non-Hispanic Caucasians. Furthermore, in a stratified analysis by source of control, the RNASEL Arg462Gln variant was found to increase prostate cancer risk in hospital-based studies (under the recessive genetic model). Nevertheless, several caveats limit generalization of these results. First, detailed information, such as age, prognostic parameters, environmental factors, and life-style, were not considered. Second, because different types of prostate cancer influence susceptibility, we tried to assess the effect of this polymorphism to different types of prostate cancer but not all data was compatible. Third, positive findings may be published faster than that those with “negative” results, which may result in a time-lag bias [34]. In addition, more environmental interactions, such as smoking habits, dietary factors, hormone exposure, toxins, and infectious agent, need to be added to the meta-analysis in the future.

Other limitations of the meta-analysis need to be addressed. First, while it is possible that the Arg462Gln polymorphism contributes to cancer, the combined effects of multiple environmental or genetic components predominate in the development of carcinoma, and may mask the effect of the polymorphism [35]. Second, the present analysis was based on unadjusted estimates. A more precise analysis with individual data is needed to evaluate combinatorial effects of the polymorphism [36]. Despite these concerns, the current analysis has some advantages compared with the individual studies. First, a substantial number of cases and controls were pooled from different studies, which significantly enhance the statistical power of this analysis. Second, the quality of case-control studies enrolled in our analysis was satisfactory based on the selection criteria. Third, no obvious publication bias was observed, which indicates that the conclusions were relatively stable and the publication bias might not influence the conclusions of the present meta-analysis.

In conclusion, this meta-analysis showed evidence that the RNASEL Arg462Gln polymorphism may contribute to the risk for developing prostate cancer in African descendants and Hispanic Caucasians, but not for other descendants. Further well-designed and prospective studies, particularly focused on gene-environment interactions, are warranted. These future studies should lead to a comprehensive understanding of the association between the RNASEL Arg462Gln polymorphism and prostate cancer risk.

PubMed database searches were conducted using the following keywords: “ribonuclease L” or “RNASEL”, “prostate cancer”, and “polymorphism” (last search updated on March 01, 2017). References of the relevant articles and retrieved paper were also screened by hand search. Eligible studies had to meet all the following criteria: (a) used an unrelated case–control design; (b) contained information about available genotype frequency; (c) published in English; and (d) included the full-text article.

Data were collected on the genotype of rs486907 G/A (R462Q) according to prostate cancer. For each publication, the data extraction and methodological quality assessment were conducted by two of the investigators independently to ensure accuracy of the data. Disagreement was resolved by discussion between the two investigators. If they could not reach a consensus, the problem was discussed by all investigators to reach a consensus. The following parameters from each study were recorded: first author’s name, publication date, ethnicity, sources of cancer cases and controls, sample size in cases and controls, and the number of cases and controls with wild-type and variant allele, respectively.

Crude ORs with 95% CIs were utilized to evaluate the strength of association between the RNASEL polymorphism and prostate cancer based on genotype frequencies in cases and controls. Five genetic contrasts were used to assess the association: allelic contrast (A-allele vs. G-allele), homozygote comparison (AA vs. GG), heterozygote comparison (GA vs. GG), the dominant genetic model (AA + GA vs. GG), and the recessive genetic model (AA vs. GA + GG). Subgroup analysis was stratified by ethnicity, source of control (hospital-based and population-based), and smoking exposure. We utilized the random effects model and fixed effects model to calculate the pooled OR. Heterogeneity assumption was evaluated by a chi-square-based Q test. P value lower than 0.001 for the Q-test indicates lack of heterogeneity among studies, hence the pooled OR was utilized by the random effects model (DerSimoniane and Laird method [37] or by the fixed-effects model (the Mantel-Haenszel method [38]). HWE was checked by the Pearson chi-square test for goodness of fit. A Z-test was used to evaluate statistical significance of the summary OR, and P value of ≤ 0.05 was considered significant. We also utilized the I2 statistic to test heterogeneity, with I2 >75%, 25–75%, and < 25% to represent high, moderate, and low degree of inconsistency, respectively [39]. We determined significance of the intercept by t-test suggested by Egger (P < 0.01 was considered representative of significant publication bias) [40]. All statistical analyses were performed with STATA version 11.0 (Stata Corporation, College Station, TX), utilizing two-sided P values.

34. Ioannidis JP. Effect of the statistical significance of results on the time to completion and publication of randomized efficacy trials. JAMA. 1998;279:281-286.