Ankylosing spondylitis (AS) is a common chronic autoimmune disease characterized by inflammation of axial skeleton and has strong genetic susceptibility. Single nucleotide polymorphisms (SNPs) have been found playing an important role in the development of AS. This study intends to explore whether the susceptibility to AS is associated with rs2171513 C>T, rs1077667 G>A in LIGHT (lymphotoxin, expressed on T lymphocytes) and rs12609318 A>G in B and T lymphocyte attenuator (BTLA) in a Chinese Han population. We studied a total of 497 AS patients and 387 healthy controls in the current research. Clinical characteristics were recorded when they were recruited. Single nucleotide polymorphisms (SNPs) were genotyped by polymerase chain reaction (PCR) and high-resolution melting methods (HRM). Statistically significant difference was found in both co-dominant model (GG vs. GA vs. AA) (p = 4.00E-06) and alleles (p = 4.59E-08) of rs1077667 between patients and controls. There was also a significant difference in alleles of rs2171513 (p = 0.037) between patients and controls. We found rs1077667 in LIGHT and rs2171513 in BTLA with susceptibility to AS, while 12609318 in LIGHT associate with susceptibility to AS. Our results showed that LIGHT might be involved in pathogenesis of AS.

Ankylosing spondylitis (AS) is a common chronic autoimmune disease characterized by axial skeleton arthritis and enthesitis [1]. Axial skeleton impairment and hypofunction decrease social and working ability of patients and make them suffering. Previous studies have shown that single nucleotide polymorphisms (SNPs) associated with the development of AS. Identification of genes underlying AS is vital to our understanding of its etiology and helpful for prophylaxis, diagnosis and treatment of AS [2, 3].

Disarrangement of immune homeostasis can induce development of autoimmune disease. Cytokines and their pathways are important for maintaining immune homeiostasis [4]. Tumor necrosis factor receptor superfamily (TNFRSF) member herpes virus entry mediator (HVEM, also known as TNFRSF14) is a very special cytokine [5]. HVEM regulates immune response of T-cell in both stimulatory and inhibitory signaling pathways by combining with different ligands. Experimental mouse models and human diseases have indicated the correlation between dysregulation of HVEM network and autoimmune pathogenesis. HVEM is now considered as an attractive target for drug intervention. LIGHT(lymphotoxin exhibits inducible expression and competes with herpes simplex virus glycoprotein D for HVEM, a receptor expressed on T lymphocytes)acts as a ligand and binds to HVEM to stimulate inflammation [6, 7], whereas the engagement between HVEM and B and T lymphocyte attenuator (BTLA), a member of the immunoglobulin superfamily, mediates inhibitory signaling pathway [8]. 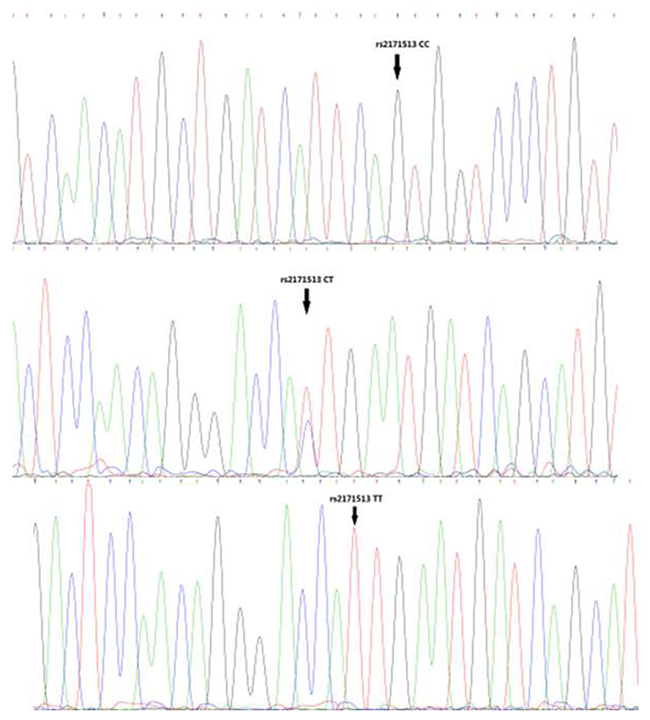 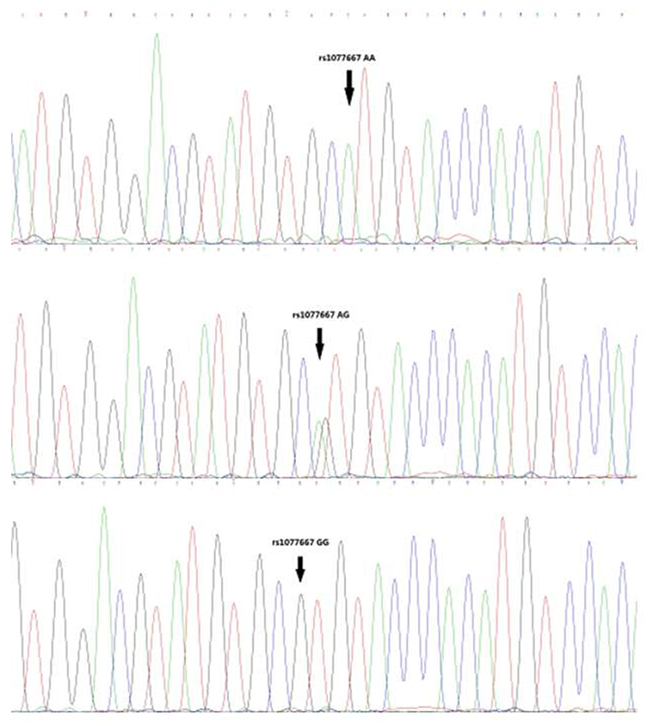 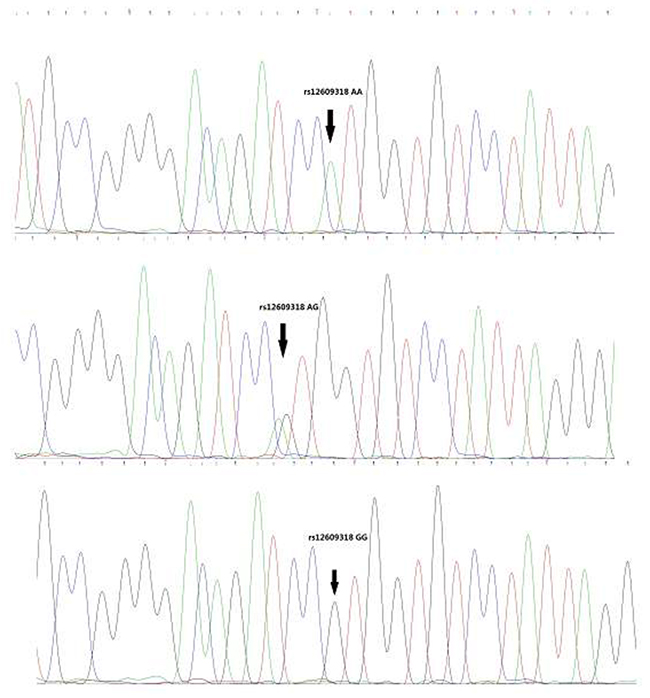 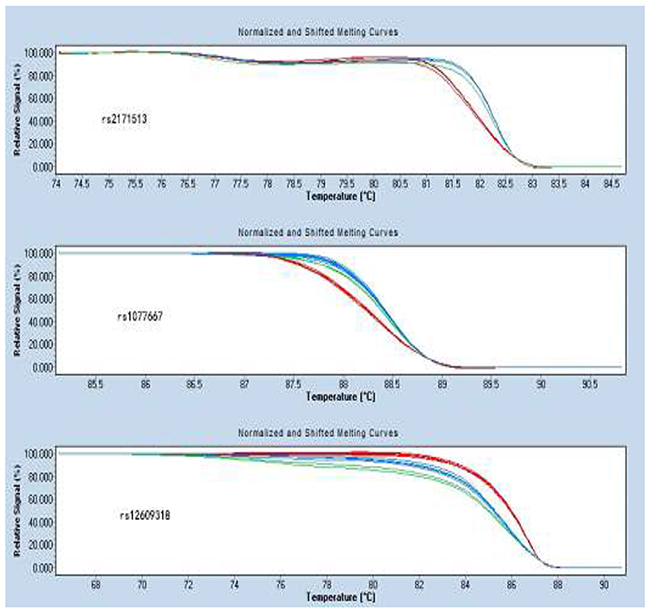 T allele of rs2171513 associated with susceptibility to AS

Clinical indexes of AS patients

AS patients were divided into three groups according to the three genotypes of each SNP. All the clinical indexes including C-reactive protein (CRP), white blood cell (WBC), red blood cell (RBC), platelet (PLT), monocyte, lymphocyte, neutrophil, complement 3 and 4 (C3 and C4) levels data did not show any significant differences among three genotypes (all p> 0.05) (Tables 3-5).

Table 3: BTLA rs2171513 genotypes and clinical indexes in AS patients

The data of CRP are presented as mean (lower quartile, upper quartile).

Table 4: BTLA rs1077667 genotypes and clinical indexes in AS patients

Table 5: BTLA rs12609318 genotypes and clinical indexes in AS patients

In this case-control study of AS among adults from a Chinese Han population, we indicated that the associations between those four SNPs and the susceptibility to AS. We found the frequency of the AA genotype of rs1077667 in LIGHT gene is higher in AS patients than in controls (p = 4.00E-06), and the frequency of A allele is also higher in the patients (37.1% vs. 50.1%, p =4.59E-08). Meanwhile, there was a correlation between the TT genotype of rs2171513 in BTLA gene and the susceptibility to AS in the dominant model (p = 0.045), and the T allele is of a higher ratio in the patients (p = 0.037). The dominant model of rs12609318 in LIGHT gene was also found a statistical significant difference (p = 0.034). The frequency data of our control group matches up with the data shown in HapMap though they are both not in HWE (p < 0.05) (Figures 1-3).

AS is a complicated polygenic disease correlating with multiple genetic mutations. And here in this study, we found rs1077667 associated with the susceptibility to AS. Significant difference was found in the distribution of genotypes of rs1077667 (p = 4.00E-06), which indicated that people with AA genotype of rs1077667 had more probability to get AS. As for alleles (p = 4.59E-08), we can do a reasonable speculation that A allele is highly likely to participate in the pathological process of AS. The dominant model and recessive model both showed statistically significant difference between patients and controls (p = 6.00E-06 and 0.000102, respectively), which supported our speculation.

LIGHT has two different forms, membrane-bound form and soluble form. Although the mechanism of transformation between the two different forms is still not clear, membrane-bound LIGHT is showed to play an important role in the survival of CD4+ memory T-cell and act as a co-stimulatory molecule, but not as strong as CD28 [13]. Besides, previous studies showed that level of serum-soluble LIGHT is always higher in patients than in controls. The association between rs1077667 and LIGHT level is pointed out that rs1077667 AA carriers have the highest LIGHT level, Thus we got the conclusion that the mutation from G allele to A allele leads to over expression of LIGHT and activated the inflammatory process which leads to the development of AS [7]. And the mutation of rs12609318 may act the similar way.

In this study, we found three SNPs rs2171513, rs1077667 and rs12609318 correlated with the susceptibility to AS. But how those mutations of SNPs acted in the transcription process remained unknown and our laboratory did not have the access to this part of research. And more research for further exploration of the molecular mechanism should be done. As for rs2171513 and rs12609318, although their genotypes and alleles did not show statistical significance in our study, it might due to the limitation by the shortage of sample size.

In conclusion, in this study we found SNPs rs2171513, rs1077667 and rs12609318 are associated with the susceptibility to AS. But further studies with a larger sample size are necessary to enhance the power. Moreover, the explanation of how exactly the expression level was influenced need more studies and experiments. Many a little makes a mickle, each step we head forward will give us a better view of AS.

This study was approved by the Institutional Review Board of Sichuan University. All participants provided their written informed consent to participate in this study. A total of 497 AS patients were diagnosed by rheumatologists according to New York clinical criteria in West China Hospital of Sichuan University [16]. And 387 gender-, age-, and ethnicity-matched healthy controls were enrolled in this study during Jan. 1 2014 to Nov. 1 2014. C-reactive protein (CRP), white blood cell (WBC), red blood cell (RBC), platelet (PLT), monocyte, lymphocyte, neutrophil, complement 3 and 4 (C3 and C4) levels were collected when patients were recruited. All study subjects were of Han ethnicity and lived in the west of China.

Blood samples (3 mL) were collected in EDTA-coated tubes, and genomic DNA was isolated from whole blood samples using the whole blood DNA kit (Roche Diagnostics; Penzberg, Bavaria, Germany). DNA was extracted from 200μL of the whole blood, according to the manufacturer’s protocol. The extracted DNA was assessed for purity, yield, and concentration on a spectrophotometer (Bio-RAD; Hercules, CA, USA). Purity was monitored by the A260/A280 ratio. DNA was diluted to 10 ng/μL for working solutions, and isolated DNA was stored at -20°C. The details of methods were illustrated in the former study [17].

Collected data were analyzed by the Light Cycler 480 Gene Scanning software v1.2 (Roche Diagnostics). Software programs used the following analysis method: normalization by selecting linear regions before and after the melting transition, temperature shifting by selecting the threshold, then automatic grouping by calculation. The exact same setting of the normalization was used for all experiments. And all methods were performed in accordance with the relevant guidelines and regulations.

The Hardy-Weinberg equilibrium (HWE) for rs2171513 C>T, rs1077667 G>A and rs12609318 A>G were tested by the χ2 test. The difference of the frequency distribution was analyzed by the χ2 test. A difference of p < 0.05 was considered statistically significant. The difference in data for clinical features and pathology grading among different genotypes was analyzed using the Kruskal–Wallis tests. All analyses above were performed with SPSS software (version 19.0, SPSS; Chicago, IL, USA). Statistical power analysis was done with Quanto software (version 1.2.4; University of Southern California; Los Angeles, CA, USA) to determine the power to detect the association of rs2171513 C>T, rs1077667 G>A and rs12609318 A>G alleles with susceptibility to AS at the designated significance level.