The aim of this study is to clarify whether LT or LR is a better curative management practice for patients with multiple HCCs based on their recurrence-free and overall survival.

Patients with multiple HCCs without macrovascular invasion who underwent LT or LR at our center between 2007 and 2013 were reviewed. Typically, both LR and LT are introduced to patients and/or their close relatives. The choice of treatment was dependent on many factors, including the patient’s liver function, portal hypertension, the remnant liver volume, and especially the patient’s preference. Currently, our medical insurance does not cover liver transplantation. Patients fulfilling the following criteria were excluded: underwent re-resection; positive surgical margin; presence of other tumor types; received dual graft liver transplantation; and underwent ABO-incompatible liver transplantation. The patients were divided into LR and LT groups based on the treatment received. This study was approved by the ethics committee of West China Hospital.

For the patients who received LR, the liver was exposed via a right subcostal incision with an extension to the upper midline after general anesthesia. Intraoperative ultrasound was routinely used. Hemihepatic vascular occlusion or the Pringle maneuver was utilized to reduce intraoperative bleeding. A CUSA Excel™ device was used for liver transection. Drainage was routinely placed before closure. The donors were ABO blood type compatible and had negative laboratory findings. The donors for living donor liver transplantation (LDLT) were close relatives. Volumetric computed tomography with contrast was administered to evaluate the right hepatic lobes of all donors. The right hepatic lobes of donors without a middle hepatic vein were at least 0.8% of the recipient’s weight, and the remaining liver remnant in the donor was at least 40% of the recipient’s weight. For patients undergoing LT, the “Mercedes-Benz” incision was used. The liver grafts were preserved and flushed using the University of Wisconsin solution. A venous-venous bypass was not used in all liver transplantations.

After surgery, the patients were regularly followed-up every three months and monitored using blood cell tests, liver function tests, serum alpha-fetoprotein (AFP) levels, visceral ultrasonography, either computed tomography or magnetic resonance imaging, and chest radiography. Postoperative recurrence was defined as either positive imaging findings compared with the preoperative examinations with or without newly rising tumor marker (AFP) values or confirmation by biopsy or resection.[14] The patients of the two groups were all followed up regularly until death or the termination of this study (September 2016).

Immunosuppressive maintenance comprised either tacrolimus or cyclosporine, mycophenolate mofetil, and a steroid after LT. Steroid pulse therapy was conducted in patients with rejection. Whenever possible, the steroid was tailed off as early as possible. For patients receiving LR, anti-viral treatment (entecavir or lamivudine) was administered to patients with a positive preoperative HBV DNA load. For patients who underwent LT, hepatitis B immune globulin was administered to the HBV patients before, during, and after transplantation. Lamivudine was also administered to the hepatitis B surface antigen-positive patients after LT.

All statistical analyses were performed using SPSS 22.0 for Windows. All continuous variables were presented as the mean ± SD and compared using one-way analysis of variance. Categorical variables were compared using either the χ2 test or Fisher’s exact test. The independent risk factors for recurrence-free survival (RFS) and overall survival (OS) were identified by Cox regression. The Kaplan-Meier method was used to compare the postoperative RFS and OS for the different groups. The differences in the RFS and OS curves were compared using a log-rank test. A P value less than 0.05 was considered significant.

To minimize the risk of selection bias, propensity score matching was used to balance the treatment choice-related characteristics of the two groups. Then, the model was used to provide a one-to-one nearest-neighbor match between patients undergoing LR and LT.

Baseline characteristics of the patient cohort

A total of 216 patients were enrolled in the current study. Twelve patients were excluded due to loss of follow-up (9 patients in the LR group and 3 patients in the LT group). Data from the remaining 204 patients were analyzed in this study. A total of 137 patients underwent LR and 67 patients received LT. Among the 67 LT patients, 16 patients received a living donor liver transplant and 51 patients underwent deceased donor liver transplantation. This study included 184 male patients and 20 female patients with a mean age of 49.70±11.19 years. The mean total tumor size was 6.6 ± 1.6 cm, and 112 patients had multiple HCCs outside of the Milan criteria. A total of 73 patients had high preoperative AFP levels (defined as a preoperative AFP level greater than 400 ng/mL).[14] HBV DNA was detected in 78 patients. Microvascular invasion (MVI) was observed in 64 patients, and 31 patients had more than 3 HCCs.

We compared the baseline characteristics of the two groups and found that the LT group had more patients with >3 tumors and more patients with Child-Pugh B and C statuses. There were no significant differences with respect to age, gender, MVI, and tumor size. 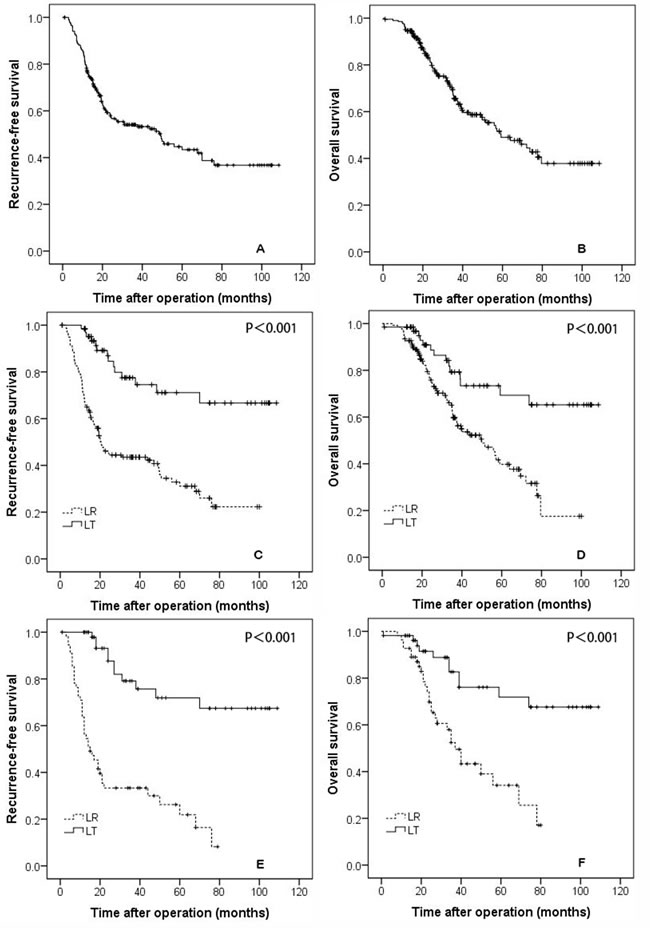 Comparison of RFS and OS for all patients

Table 1: Clinicopathological characteristics of HCC patients before and after one-to-one propensity matching

Subgroup analysis based on the Milan criteria 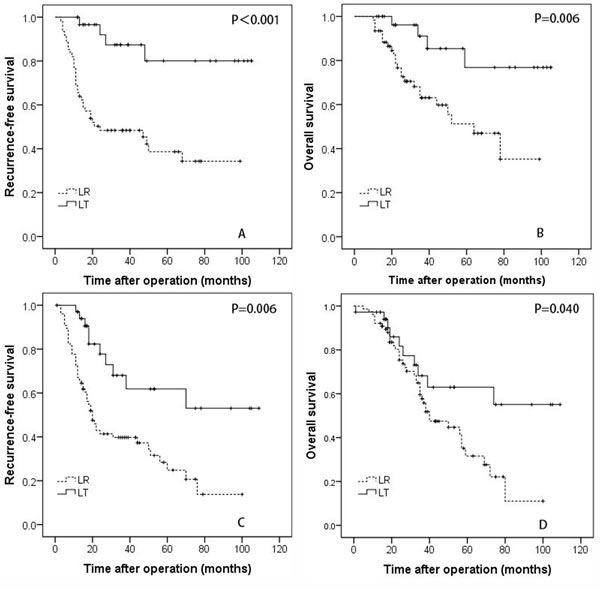 As shown in Table 2, the univariate analysis suggested that the presence of MVI, a positive preoperative HBV DNA status, and LR were associated with high postoperative recurrence. However, the multivariate analysis for RFS in all patients suggested that LR (HR = 0.244, 95% CI = 0.138-0.430) and MVI (HR = 1.599, 95% CI = 1.069-2.392) were independent risk factors for postoperative recurrence.

Table 2: Univariate and multivariate analysis for RFS in patients with multiple HCCs undergoing LR or LT

As presented in Table 3, the univariate analysis indicated that LR, a positive preoperative HBV DNA status, and failure to meet the Milan criteria were potential risk factors related to poor OS. However, in the Cox proportional hazards model, only LR (HR = 0.364, 95% CI = 0.202-0.655) was associated with an increased mortality rate.

Table 3: Univariate and multivariate analyses for OS in patients with multiple HCCs undergoing LR or LT

HCC ranks as the third most frequent cancer-related death worldwide due to its aggressive nature.[1] Many studies have confirmed that multiple tumors are associated with an increased incidence of postoperative recurrence and a decreased survival rate.[6, 7] However, the optimal management strategy for patients with multiple HCCs is not well established. Our study suggested that liver transplantation provided better RFS and OS for patients with multiple HCCs without macrovascular invasion.

Multiple HCCs may be either intrahepatic metastasis from a primary HCC or multicentric in origin.[15, 16] Nagasue et al [17] suggested that multiple HCCs might all develop intrahepatic recurrence within 5 years after LR due to their multicentric origin. Many studies reported that the most common site for recurrence was the remaining liver.[16, 17] Some studies suggested that early recurrence (within the first 2 years after the operation) after liver resection might be metastasis arising from the primary HCC, whereas late recurrence (more than 2 years after operation) might have a multicentric origin.[18, 19] Wu and colleagues suggested that multiple HCCs were an independent risk factor for both early and late recurrence after liver resection. LT removes the entire affected liver and can eradicate micro-metastasis of the remaining liver. Moreover, LT not only removes the tumors but also cures any background liver diseases. In contrast, LR only resects the tumor and has no effect on background liver diseases.

Some investigations suggest that LR may offer long-term survival rates that are similar to the LT survival rates for patients with HCC within the Milan criteria.[20, 21] However, these studies included either solitary tumors up to 5 cm or no more than 3 tumors with each tumor no more than 3 cm.[20, 21] In this study, we only included multiple tumors. We confirmed that the outcomes of patients with multiple HCCs who underwent LT were better than the outcomes of patients who underwent LR. Fan et al [22] confirmed that patients with a single tumor up to 5 cm had better 5-year survival rates than patients with polynodular tumors (2-3 nodules, each ≤3 cm). Poon et a l[23] also suggested that having multiple tumors was an independent risk factor associated with an increased recurrence rate and mortality for patients with HCC within the Milan criteria after liver resection or transplantation.

Our study suggested that MVI was associated with a high incidence of postoperative recurrence but not with OS. Previous studies confirmed that MVI was a strong prognostic factor for postoperative recurrence after either LR or LT.[22, 30] However, Shah et al [31] suggested that macrovascular invasion but not MVI was related to poor long-term survival after LT. The study performed by Vivarelli et al [32] also indicated that there was no relationship between postoperative OS and MVI for patients with HCC after LT. Moreover, Chan et al [33] reported that LT doubled the chances of a cured status for patients with HCC, with MVI, and within up-to-7 criteria compared with LR.

In conclusion, our study suggested that patients with multiple HCCs had better RFS and OS following liver transplantation compared with liver resection regardless of whether they met or exceeded the Milan criteria.

The authors declared no conflict of interest