At present, the minipigs are becoming the most commonly used large laboratory animals because the minipigs are small in body size, easy to operate, and share anatomical, physiological and biochemical similarities with humans. Because of the remarkable similarities between porcine and human skin structure, pigs are often considered as an ideal model for skin-related studies, including skin grafting [1], cosmetic identification [2], ultraviolet radiation [3], skin cancer [4], burns [5, 6], frostbite [7], skin aging [8] and etc. However, because of pig skin coated with shaggy hairs, shaving hair process is inevitable before skin test or surgery.

Wnt proteins are required for initiating hair follicle development [12]. Dickkopf 1 (DKK1), a potent and specific endogenous secreted inhibitor of Wnt action, functions by binding and inhibiting LRP coreceptors required for activation of canonical Wnt signaling and is diffusible in vivo [12–14], and is associated with aging-associated alopecia in mice [15] and human [16]. Transgenic mice ectopically expressing DKK1 transgene under control of a human keratin 14 (K14) promoter displayed an early and complete block in the development of skin appendages including all types of hair follicle, thereby resulting in hairless phenotype [12]. Mice expressing lower levels of the DKK1 transgene were viable and displayed sparse hair or patches of absent hair [12], and the development of vibrissa follicles and all types of hair follicle is completely blocked by high levels of ectopic DKK1 in K14-Dkk1 transgenic mice [12]. Additionally, transgenic pigs harboring GFP transgene under control of a human K14 promoter showed GFP expression in the skin, but not in other organs [17]. Against this background, we intend to generate the transgenic minipigs expressing pig DKK1 (pDKK1) transgene under control of a human K14 promoter by somatic cell nuclear transfer (SCNT), and finally achieve hairless minipigs.

pERKDZG was constructed via multiple steps of cloning as described in Methods, and the map is shown in Figure 1A. pERKDZG contains two independent expression cassettes, the transcription of pDKK1 and EGFP genes are driven by a human K14 promoter, while mRFP is regulated under the control of EF-1α promoter. The successful construction of pERKDZG was confirmed by restriction enzyme (Figure 1B) and sequencing (data not shown). 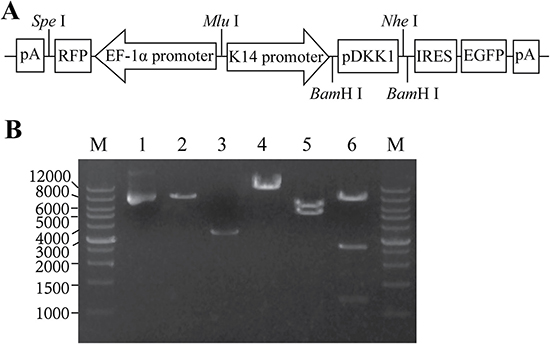 To express pDKK1 and EGFP transgenes in the porcine skin, we chose the human K14 gene promoter (Figure 1A) because it has been demonstrated to be strongly active in the dividing cells of the epidermal basal layer (basal keratinocytes), hair follicles and oral epithelia [18, 19]. Most importantly, the K14 promoter has been employed to achieve skin-specific expression of various transgene(s) in the transgenic mice [18, 19] and transgenic pigs [17]. As mentioned above, K14-GFP transgenic pig expressed GFP specifically in basal keratinocytes of skin [17]. Moreover, the skin-specific expression of pDKK1 in transgenic pig avoids the harmful effects of DKK1 overexpression in other tissues and organs.

The mRFP reporter gene (under the control of EF-1α promoter) contained in pERKDZG provides the following advantages. Firstly, mRFP is employed to assess whether the ERKDZG transgene is successfully introduced into PEFs by RFP assay. Secondly, mRFP-positive PEFs used as donor cells for SCNT can be sorted by FACS. Finally, the transgenic pigs are identified by RFP expression observation.

In vitro confirming the functionality of pERKDZG

Prior to generating the transgenic pig, the functionality of pERKDZG construct was verified by fluorescence observation and via checking pDKK1 expression as described in “Materials and Methods” section.

As expected, RFP fluorescence was observed in the indicated cells transiently transfected with pERKDZG (Figure 2A), indicating that mRFP reporter gene can express normally under the control of a ubiquitous EF-1α promoter. 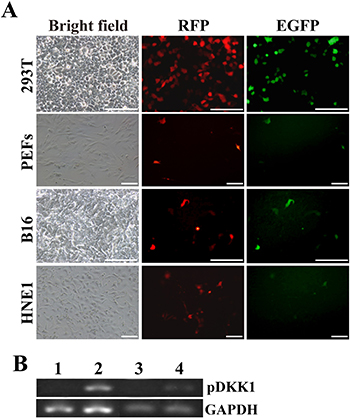 After the construct (e.g. pERKDZG) was confirmed for functionality, the lentiviruses harboring ERKDZG transgene were produced, followed by infecting PEFs. RFP expression illustrated that PEFs were successfully infected by lentiviruses harboring ERKDZG (Figure 3A). RFP-positive PEFs were sorted by flow cytometry to obtain the purified PEFs carrying ERKDZG (Figure 3B), designated DKK1-PEFs as donor cells used for SCNT. 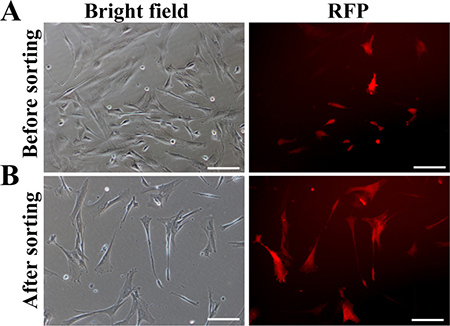 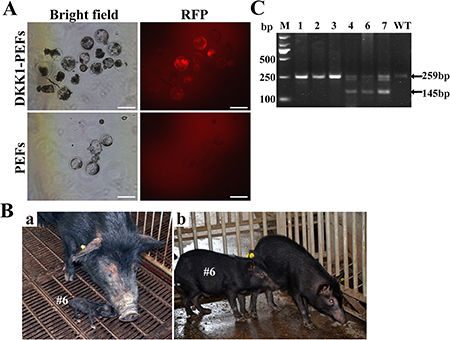 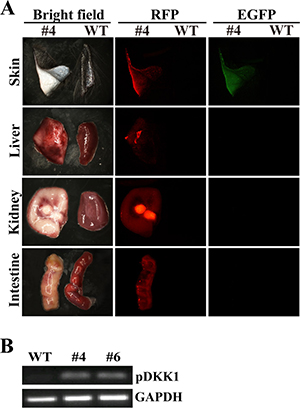 Wnt paracrine signaling molecules play key roles in the development of most organ systems, regulating cell fate decisions, proliferation, adhesion, cell shape and cell movements; the most extensively studied, ‘canonical’ pathway involves binding of Wnt to Frizzled (FZ) receptors and to obligate co-receptors of the LDL receptor related protein (LRP) family, leading to inactivation of a complex of proteins that degrades cytoplasmic b-catenin [22–24]. The previous studies revealed that Wnt signaling has emerged as the dominant pathway controlling the patterning of skin and influencing the decisions of embryonic and adult stem cells to adopt the various cell lineages of the skin and its appendages, as well as subsequently controlling the function of differentiated skin cells [22–24]. Additionally, the Wnt pathway is considered to be the master regulator during hair follicle morphogenesis in mice [22–24]. DKK1 is a specific endogenous secreted inhibitor of Wnt coreceptors of the LRP family that are required for the activation of the canonical Wnt signaling pathway [22–24]. Therefore, DKK1 transgenic pigs generated in this study may provide a large animal pig model for exploring the functions of Wnt signaling in skin development, homeostasis and disease, hair follicle development, and skin and hair follicle adult stem cells biology of pigs.

The animal experiment was approved by the Department of Science and Technology of Guangdong Province, with an approval ID SYXK (Guangdong) 2011–0074, and complied with the guidelines of the Animal Care Committee, Southern medical university.

Firstly, the full-length fragment of pig DKK1 (pDKK1) gene CDS was amplified by PCR from Tibet minipig liver cDNA with the primer pair (pDKK1-FP: 5′-GATGACGAAGAATGCGGCAG-3′, pDKK1-RP: 5′-CAAGGTGCTATGGTCATTA C-3′), which were designed based on reported pDKK1 complete CDS sequence (Genebank accession number: JN966758.1), and then inserted into pMD-18T simple (Takara) to generate pMD18-pDKK1, followed by sequencing. The sequencing results of two Tibet minipigs are consistent, and the CDS sequence of Tibet minipig DKK1 gene is shown in Supplementary Figure 3. Secondly, pDKK1 cDNA was amplified from pMD18-pDKK1, and subsequently subcloned into pK14-mDKK1 cutted by BamH I via In-Fusion cloning to generate pK14-pDKK1. Thirdly, a fragment of mRFP gene driven by EF-1α promoter (EF-1α-RFP) was amplified from pCDH-CMV-MCS-EF-1α-RFP, and then inserted into pHEZG at the Spe I site by In-Fusion cloning to creat pEf1α-RFP-fullEf1a-MCS-IRES-ZsGreen (pEREZG). Finally, the fragment of K14-pDKK1 was amplified from pK14-pDKK1, and subsequently subcloned into the MluI and NheI digested pEREZG by In-Fusion cloning to obtain the final transgenic vector pHAGE- EF-1α-RFP-K14-pDKK1-ZsGreen (pERKDZG) (Figure 1A). All of the above-mentioned vectors, including pK14-pDKK1, pEREZG and pERKDZG, were verified by sequencing (data not shown) and restriction enzyme digestion (Figure 1B or data not shown).

In vitro identification of the functionality of the resulting pERKDZG

To in vitro confirm the functionality of the resulting plasmid pERKDZG, pERKDZG was transiently transfected into PEFs, 293T cells, B16 cells and HNE1 cells by lipofectamine 2000 reagent (Invitrogen) according to the manufacturer’s instructions, and then the expression of EGFP and RFP in transfected cells were assayed under inverted fluorescence microscope (Nikon TE-2000) 48h after transfection, and pDKK1 transgene expression was detected by RT-PCR.

The lentiviral packaging plasmids psPAX2 and pMD2.G were kindly provided by Prof Didier Trono (University of Geneva, Geneva, Switzerland). To generate transgenic donor cells, the lentiviral expressing vector pERKDZG along with packaging plasmids (psPAX2 and pMD2.G) were co-transfected into 293T cells using Lipofectamine 2000 reagent (Invitrogen) according to the manufacturers’ instruction, and subsequently virus supernatant was harvested 96 hours after transfection to infect PEFs. 3 days later, the infecting efficiency was estimated by RFP assay and FACS analysis. Next, RFP-positive PEFs were sorted by flow cytometry to obtain the purified PEFs carrying ERKDZG, designated PEF-DKK1 as donor cells used for SCNT.

SCNT was performed as described [20, 21]. Pig oocytes were collected from ovaries purchased from a local slaughter house and cultured for 42–44 h for maturation. Then the nuclei of the in vitro matured oocytes were removed by micromanipulation. After electro-fusion and activation, about 200 reconstructed embryos were surgically transferred into the oviduct of a surrogate pig on the first day of standing estrus. Some embryos were cultured for 7 days to test the blastocyst formation rate as well as developmental ability. RFP expression in the blastocysts were observed under the inverted fluorescence microscope. Pregnancy status was monitored using an ultrasound scanner between 30–35 days post-transplantation and the cloned piglets were delivered by natural birth.

Genomic DNA was extracted from the ears of newborn piglets. To identify whether the exotic DKK1 transgene was integrated into the genomic DNA, two primer pairs were designed and synthesized to amplify the genes DKK1 and GAPDH (used as the reference gene). The primers for DKK1 gene are forward pair (5′- GGGGAAATTGAGGAAACC-3′) and reverse pair (5′-CACAGTCTGATGATCGGAGA-3′), while the primers for GAPDH gene are forward pair (5′-TTG GCTACAGCAACAGGG-3′) and reverse pair (5′-CTG GGATGGAAACTGGAAGT-3′). PCR amplification conditions are as follows: pre-denaturationat 94°C for 5min, followed by 30 amplification cycles of denaturation at 94°C for 50 s, primer annealing at 60°C for 40s, and extension at 72°C for 30 s, and finally an additional extension at 72°C for 10min. Genomic DNA from a wild type piglet was used as a negative control. The PCR products were analyzed by 3% agarose gel electrophoresis.

Total RNA was extracted from cells transfected by pERKDZG and skin of DKK1 transgenic piglets using Trizol Reagent (TaKaRa), and then treated with DNase I (TaKaRa) according to the protocol provided by the manufacturer. First-strand cDNA was synthesized using the PrimeScript RT reagent Kit (TaKaRa). The mRNA expression levels of DKK1 transgene were determined by RT-PCR. The primers used for RT-PCR to detect the expression of DKK1 transgene and GAPDH gene (used as the reference gene) are the same as primers used for genotype identification (described above). PCR amplification conditions are the same as amplification conditions for PCR-based genotyping. The PCR products (145 bp for DKK1 and 186 bp for GAPDH) were then analyzed by 3% agarose gel electrophoresis.

1. Summerfield A, Meurens F, Ricklin ME. The immunology of the porcine skin and its value as a model for human skin. Molecular immunology. 2015; 66:14–21.

19. Vassar R, Rosenberg M, Ross S, Tyner A, Fuchs E. Tissue-specific and differentiation-specific expression of a human K14 keratin gene in transgenic mice. Proceedings of the National Academy of Sciences of the United States of America. 1989; 86:1563–1567.