Osteoarthritis (OA) is one of the most common world-wide chronic diseases [1]. A number of factors are believed to be related to the development of this potentially irreversible disease including aging, obesity, trauma, genetic disorders, systemic diseases, and other problems [2]. The development of osteoarthritis is believed to be multifactorial or resulted from a series of factors. Cartilage in joints aids in smooth mobility of joints [3]. Cartilage is consisting of chondrocytes and extracellular matrix secreted by chondrocytes which is rich in collagen and proteoglycan. Previous studies had demonstrated that the participation of immune system is one of the key elements in the development and progression of OA [4]. The production and secretion of pro-inflammatory cytokines such as tumor necrosis factor-α (TNF-α) and Interleukin-1ß (IL-1ß) could result in the release of matrix metalloproteinases that assist in cartilage destruction [5].

Interleukin 18 is one member of the IL-1 cytokine family, comprising 157 amino acid residues [6, 7]. IL-18 could be produced by chondrocytes, osteoblasts, FLS, and macrophages in joints [8, 9]. It is reported that IL-18 could increase release of MMP-1, MMP-3, and MMP13 from chondrocytes [10]. Another vitro study demonstrated that IL-18 may contribute to apoptosis in human articular chondrocytes [11]. Vivo study also indicates that IL-18 promotes joint inflammation [12, 13]. However, mechanism of how IL-18 works remains nuclear. It is reported in previous study that IL-18 induces inflammation through activation of the nuclear factor-kB (NF-kB), p38 mitogen activated protein kinase (MAPK) and Erk1/2 pathways [10], other pathways related to OA are poorly studied. However, it is well known that Wnt/β-catenin and Hedgehog pathways are another two important pathways related to OA [14–18]. DKK-1 and Cyclopamine work as potent antagonist of Wnt/β-catenin and Hedgehog signaling [19, 20]. Therefore, in the present study, Wnt/β-catenin and Hedgehog pathways are investigated in inflammation reaction of chondrocytes caused by IL-18 in vitro, and our results will help understanding of the effect of IL-18 in OA.

We performed qRT-PCR to detect the expression levels of MMP-2, 3, 9, 13, aggrecanses (adamts 4/5) Collagen II and aggrecan in chondrocytes. Chondrocytes were treated with IL-18 in different concentration (0ng/ml as control, 1ng/ml, 10ng/ml, 100ng/ml) for 24 hours. RT-PCR showed significant up-regulation of mRNA levels of MMP-2, 3, 9, 13 adamts 4/5, down-regulation of mRNA levels of Collagen II and aggrecan, which is IL-18 dose-dependent (Figure 1, Supplementary Figure 1A). Then, we assessed the protein level of MMP-2, 3, 9, 13 adamts 4/5, Collagen II and aggrecan by Western blot analysis (Figure 2, Supplementary Figure 1B), which comes to the similar results of qRT-PCR. All these results suggested the inflammatory role of IL-18 on cartilage matrix by up-regulation of matrix-degrading enzymes and by down-regulation of matrix components secreted chondrocytes in vitro, which is similar with the results of previous studies [10, 11]. 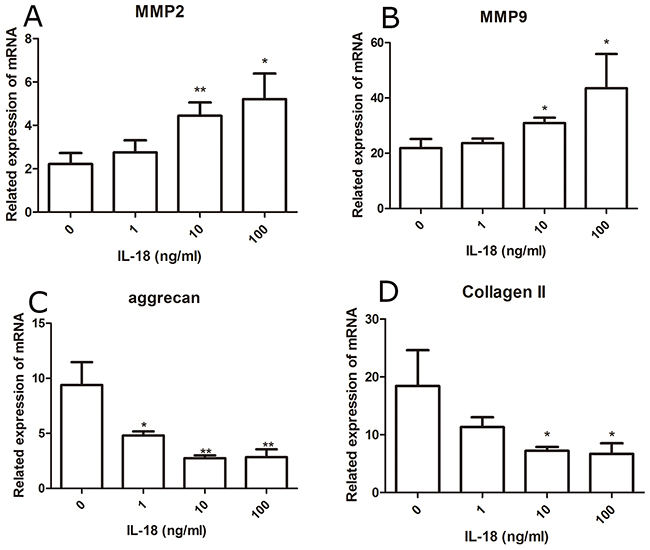 Figure 1: Up-regulation of matix-degrading enzyme genes and down-regulation of chondrocyte-specific genes at mRNA level caused by IL-18 were observed in SD rat chondrocytes. The chondrocytes were treated with different concentrations of IL-18 for 24 hours. The expression of chondrocyte-specific genes and matix-degrading enzyme genes, MMP-2 (A), MMP-9 (B), aggrecan (C), and Collagen II (D) were evaluated by Real-Time PCR. Significance was calculated by a one-way ANOVA with a post hoc Tukey’s multiple comparisons test. *p<0.05, **p<0.01, ***p<0.001 versus 0ng/ml IL-18 treated group. 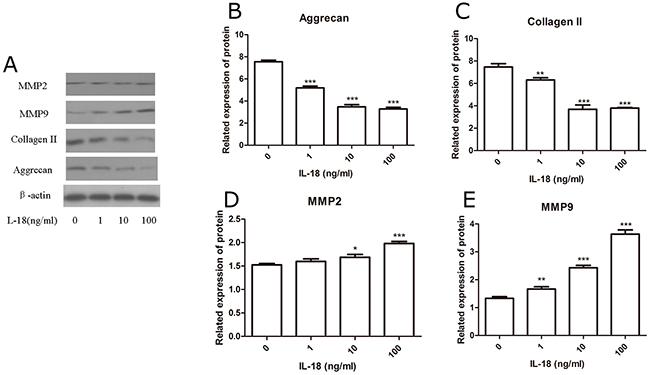 Figure 2: Up-regulation of matix-degrading enzymes and down-regulation of chondrocyte-specific proteins caused by IL-18 were observed in SD rat chondrocytes. The chondrocytes were treated with different concentrations of IL-18 for 24 hours. The expression of chondrocyte-specific proteins and matix-degrading enzymes, MMP-2 (D), MMP-9 (E), aggrecan (B), and Collagen II (C) were evaluated by Western blots (A), β-actin worked as internal control here. Significance was calculated by a one-way ANOVA with a post hoc Tukey’s multiple comparisons test. *p<0.05, **p<0.01, ***p<0.001 versus 0ng/ml IL-18 treated group. 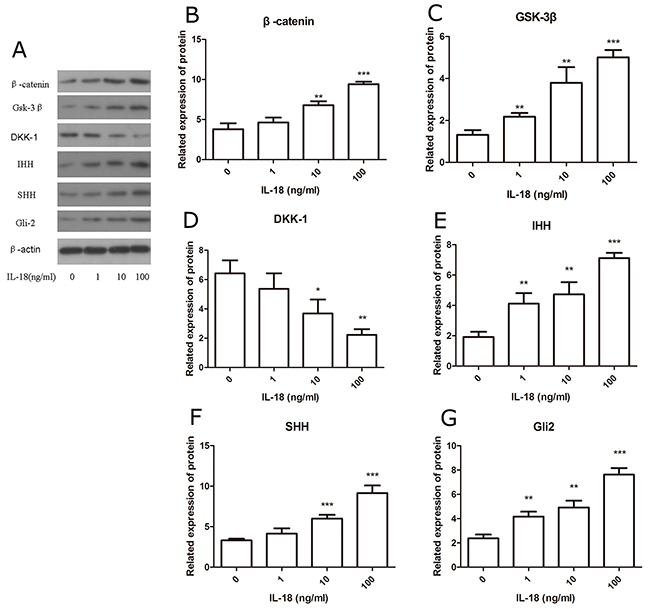 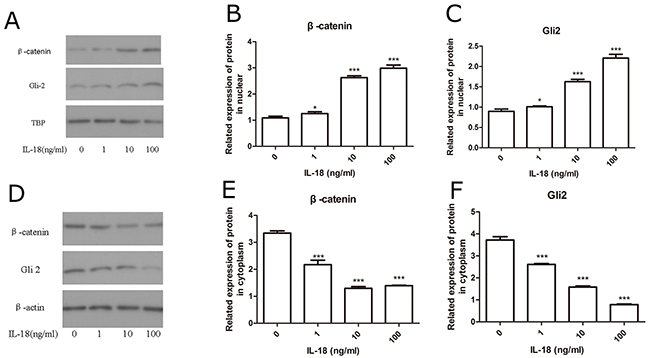 Figure 4: IL-18 induced nuclear translocation of β-catenin and Gli-2. The chondrocytes were treated with different concentrations of IL-18 for 24 hours. The level of β-catenin and Gli2 in nucleus (A-C) and cytosol (D-F) was evaluated dividedly by Western blot. Significance was calculated by a one-way ANOVA with a post hoc Tukey’s multiple comparisons test. *p<0.05, **p<0.01, ***p<0.001 versus 0ng/ml IL-18 treated group. 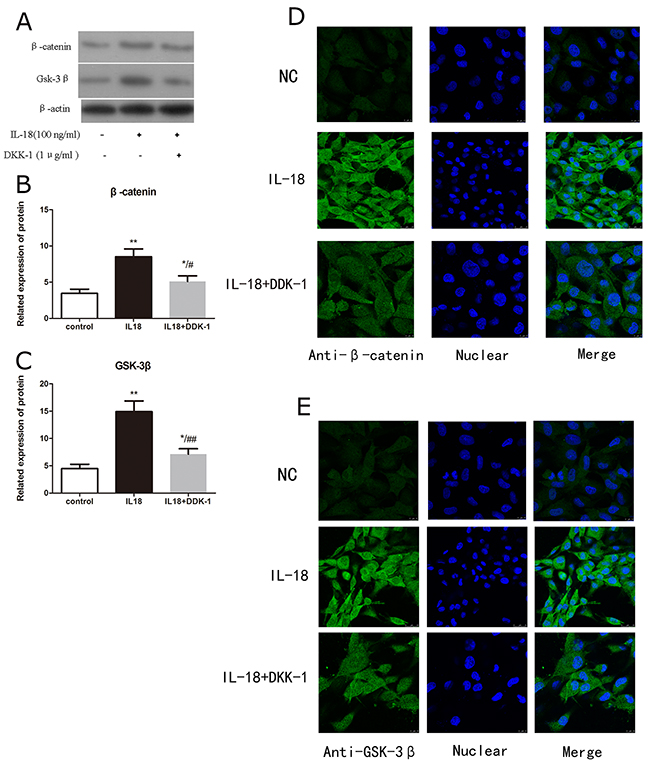 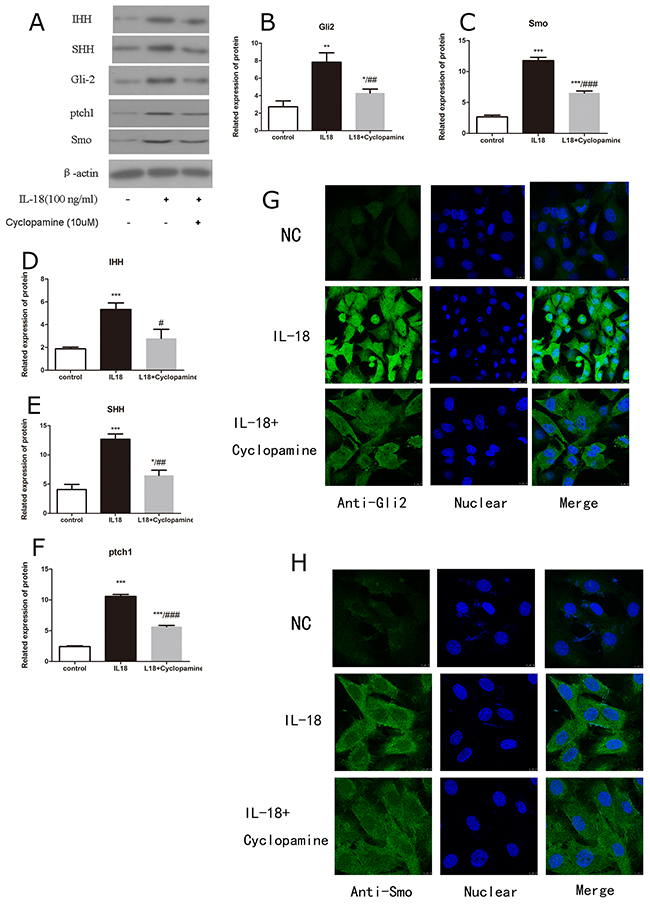 IL-18 is a cytokine with a series of biological actions. The up-regulated expression of IL-18 in cultured chondrocytes stimulated by IL-1β has been noted [8]. As a member of the IL-1 cytokine family, IL-18 is mainly produced by chondrocytes, osteoblasts, FLS, and macrophages in joints [8, 9], and the increased concentration of IL-18 in the synovial fluid, synovium, cartilage, and blood serum is reported to be related to the degree of severity of OA seen in radiographic images [21–23]. Several studies have confirmed the inflammatory effect of IL-18 on chondrocytes in vitro and in vivo [8, 10–12]. Furthermore, the previous study has found that the enhancement of MMP-1, MMP-3, and MMP-13 depended on the activation of the NF-kB and p38 MAPK pathways, whereas the increased production of TIMP-1 depended on the Erk1/2 pathway [10].

In general, cartilage degradation is mediated by MMP family, which is indeed well accepted [24]. High level of MMPs is regarded as one of the main expressions of OA [25, 26], as well as low level of aggrecan and type II collagen [27]. Proinflammatory cytokines induce expression of matix-degrading enzymes that degrade cartilage matrix and aggravate OA [28]. In addition, these cytokines downregulate the expression of genes involved in maintenance of cartilage matrix (like aggrecan and type II collagen), and promote hypertrophy and apoptosis of chondrocytes [29]. In the present study, up regulation of MMP-2, 3, 9, 13 and aggrecanses (adamts 4/5), down regulation of Collagen II and aggrecan caused by IL-18 stimulation were observed by qRT-PCR and Western blot, thus we confirmed the inflammatory effect of IL-18.

Besides NF-kB, PI3K, p38 MAPK and Erk1/2 pathways [10, 30, 31], the regulation of chondrocyte-specific proteins and matix-degrading enzymes is also related to some other pathways. Ma B et al reported that the expression of MMPs could be regulated by Wnt/β-catenin pathway [32]. A study by Xu HG et al demonstrated that intermittent cyclic mechanical tension loading led to Wnt/β-catenin signaling activation and loss of chondrogenic phonetype of chondrocytes [17]. Another recent study performed by Cheleschi S et al reported that hydrostatic pressure restores the expression levels of some miRNAs and downregulates some matix-degrading enzymes via the Wnt/β-catenin pathway [16]. Study performed by Lin AC et al demonstrated that Hedgehog signaling regulates normal chondrocyte and differentiation, and they found Hedgehog signaling is activated in osteoarthritis [18]. Meanwhile, our previous studies also indicated that several drugs could provide chondroprotective effects on OA by inhibiting Wnt/β-catenin and Hedgehog pathways [33, 34]. In this study, we investigated the role of Wnt/β-catenin and Hedgehog pathways in the proinflammatory effect of IL-18 on OA. Results of Western blot showed increased level of β-catenin, GSK-3β, DKK-1, IHH, SHH, Gli-2, ptch1, and Smo in whole cell caused by IL-18 stimulation, which means the inflammatory effect of IL-18 may be related to Wnt/β-catenin and Hedgehog pathways. As β-catenin and Gli-2 were transported into cell nucleus when the pathways were activated, the amounts of β-catenin and Gli-2 in cell nucleus were investigated in addition to confirm the activation of Wnt/β-catenin and Hedgehog pathways, and results of Western blot showed increased amounts of both β-catenin and Gli-2 in cell nucleus. In order to confirm the connection between the pathways and inflammatory effect of IL-18 on chondrocyte, we ran plenty of pathway inhibition tests. DKK-1 that was used as inhibitor of Wnt/β-catenin pathway downregulated MMP-2 and MMP-9 and upregulated aggrecan in the presence of IL-18 according to the results of qRT-PCR and Western blot. We also noticed that the results of qRT-PCR and Western blot of Collagen II was a little different (Figure 6). According to a study published in 2015, the Wnt signaling orchestrates a rich post-transcriptional regulatory function [35], so the different expression level of mRNA and protein of Collagen II may be related to the post-transcriptional regulatory function of Wnt signaling. On the other hand, we used Cyclopamine as blocker of Hedgehog signaling. Resutlts showed that Cyclopamine treatment decreased MMP-2 and MMP-9 and increased Collagen II and aggrecan in the presence of IL-18, and Cyclopamine also downregulated the amount of Gli-2 in cell nucleus. As the relationship and distribution of IL-18Rs and the effect of IL-18 on cell proliferation and apoptosis have been investigated in other studies, so we didn’t run similar researches [8, 11]

Collectively, our results demonstrated that Wnt/β-catenin and Hedgehog pathways were involved in the inflammatory effect of IL-18 in vitro. These findings would help further understanding of IL-18 action.

This study was approved by the Ethics Committee of the 2nd Affiliated Hospital, School of medicine, Zhejiang University, Hangzhou, China. Four-week-old Sprague Dawley rats were sacrificed, and cartilage harvested from the knee joints was digested immediately with 0.25% pancreatic enzymes for 30 min to remove other tissues and cells. Then, the cartilage fragments were digested with 0.2% collagenase II on a horizontal shaker at 37˚C for 4 hours to isolate the cells in cartilage. The chondrocytes were grown in DMEM with 10% FBS, 100U/mL penicillin, and 100mg/mL streptomycin at 37˚C with 5% CO2.. Cells were seeded in six-well plates for analysis. When studying the inflammatory effect of IL-18, Subconfluent cells were treated with IL-18 in various concentrations (0ng/ml as control, 1ng/ml, 10ng/ml, 100ng/ml) for 24 hours before analysis. According to the results, we chose 100ng/ml as the concentration of IL-18 in the following pathway inhibition tests. In pathway inhibition tests, subconfluent cells were pretreated with DKK-1 (1μg/ml) or Cyclopamine(10μm) for 1h then incubated with IL-18 (100ng/ml) for 24 hours before analysis.

Coexpression of key proteins of Wnt/β-catenin and Hedgehog pathways was carried out using fluorochrome-conjugated antibodies. Chondrocytes cultured on glass coverslips were fixed in 4% paraformaldehyde for 10 min, and permeabilized for 5 min with 0.1% v/v Triton X-100. Cells were incubated with primary antibody for 4 h, washed, and then incubated with fluorochrome-conjugated secondary Ab for 2 h in the dark. Coverslips were mounted onto glass slides using DAPI-containing mounting medium.

All experiments were repeated three times. All the data in figures are presented as a grouped column scatter of three repeats with diplayed mean. Statistical differences were performed with SPSS 12.0 version. One-way ANOVA with a subsequent post hoc Tukey’s test was used for multiple comparisons. P<0.05 is considered to be significant with statistical meaning.

Jiapeng Bao and Chiyuan Ma contributed equally to this study.

All authors listed were involved in the study and preparation of the manuscript.

All conference has been list at the end of the paper with mark in the manuscript.

All data supporting the conclusions are included in this article.

The protocols of study were approved by the Ethics Committee of the 2nd affiliated hospital, School of Medicine, Zhejiang University, Hangzhou, China.

2. Wojdasiewicz P, Poniatowski LA, Szukiewicz D. The role of inflammatory and anti-inflammatory cytokines in the pathogenesis of osteoarthritis. Mediators Inflamm. 2014; 2014: 561459.