Since mitochondrial Ca2+ uptake is essential for mitochondrial metabolic activity, we manipulated the expression of PRMT1 and UCP2, proteins known to affect the mitochondrial Ca2+ uptake machinery, to investigate their effect on human non-small-cell lung cancer cell lines A549, Calu-3 and H1299. Origin of each cell lines was validated by Sanger sequencing [Supplementary Figure 1A]. Knockdown or overexpression, verified by qRT-PCR [Supplementary Figure 1B], of either UCP2 or PRMT1 alone did not affect cell viability and apoptotic caspase 3/7 activity. Combined depletion of UCP2 and PRMT1 by specific siRNAs strongly decreased cell viability [Figure 1A], whereas activity of apoptotic caspases 3/7 was significantly increased [Figure 1B]. In contrast, overexpression of both proteins improved cell viability and diminished apoptotic caspase 3/7 activity. In line with these data, cancer cell proliferation was significantly enhanced by combined overexpression of UCP2 and PRMT1 in comparison to cells with double knockdown [Figure 1C]. 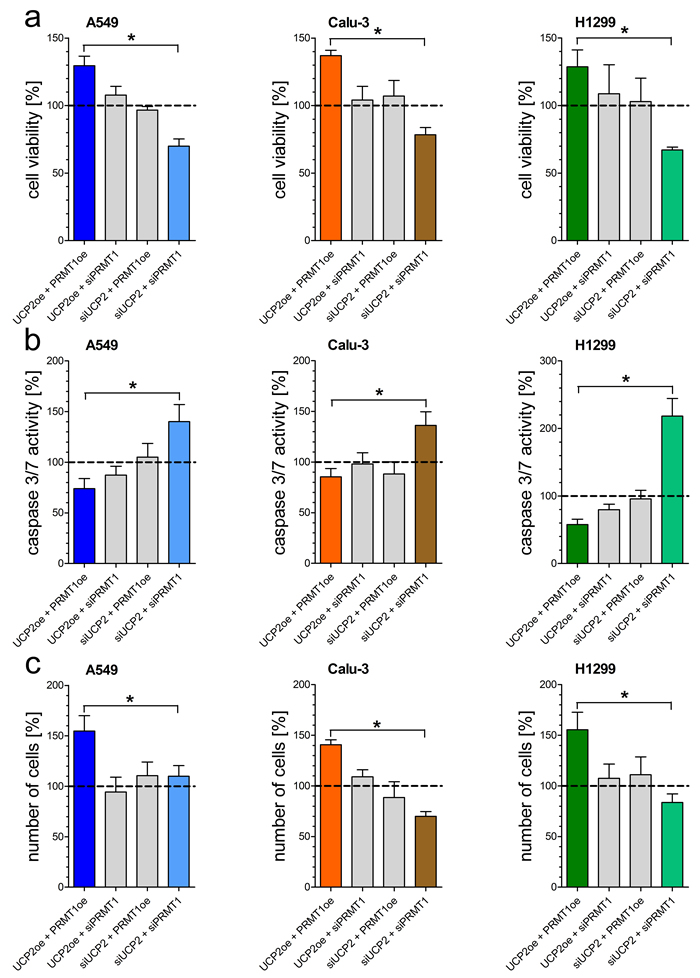 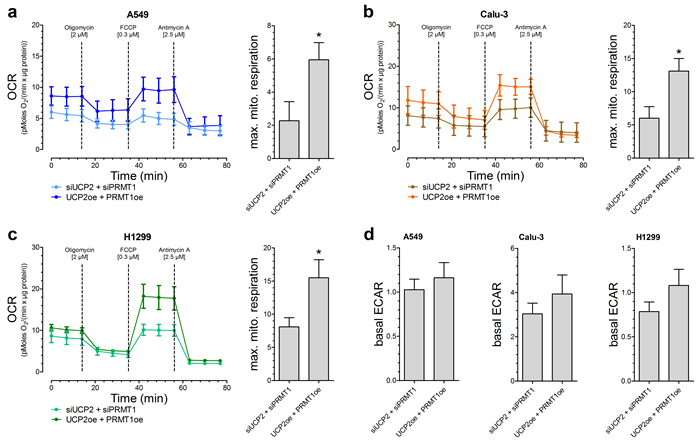 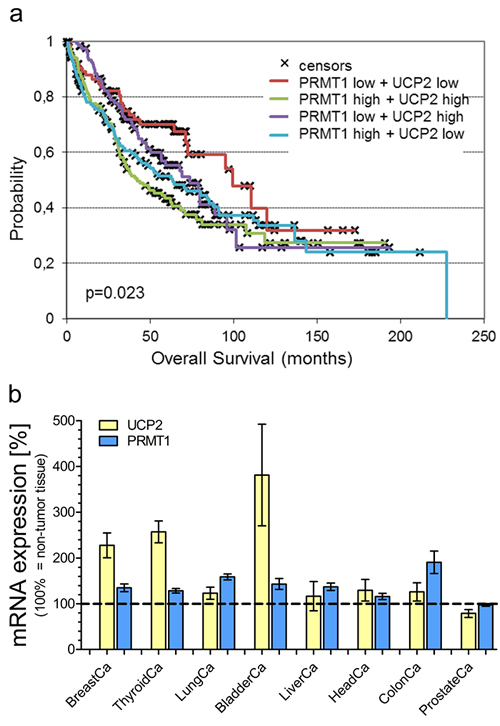 H1299 cells were grown in Dulbecco’s Modified Eagle Medium (DMEM) from Sigma Aldrich (Vienna, Austria), A549 and Calu-3 cells in a 1:1 mixture of Ham‘s F12 and DMEM. Media were supplemented with 10% fetal bovine serum, 100 U/ml penicillin, 100 µg/ml streptomycin and 1.25 µg/ml amphotericin B (Gibco, Lifetechnologies; Vienna, Austria). To verify the origin of the various cell lines, cell lysates were sent to Microsynth (Balgach, Switzerland) for Sanger sequencing. Cells were transiently transfected at a confluence of 60 - 80% with 1.5 µg plasmid DNA encoding UCP2 or PRMT1 as well as with 100 µM siRNA UCP2 or PRMT1 using 2.5 µl of TransFastTM transfection reagent (Promega; Madison, WI, US) in 1 ml of serum- and antibiotic-free medium. Transfection mix was replaced by full culture medium after 24 hours. All experiments were performed 48 hours after transfection. siRNAs were obtained from Microsynth, and their sequences (5′-3′) were as follows: UCP2

For cell viability and apoptosis assays, cells were plated 24 h after transfection on 96-well plates at a density of 5,000 cells/well. Cell viability was measured 48 h after transfection using CellTiter-Blue assay and apoptotic caspase activity was determined by using the Caspase-Glo® 3/7 assay (Promega; Madison, WI, US) as reported previously [10].

According to mRNA expression of PRMT1 and UCP2, Kaplan-Meier survival plots presenting the survival of lung carcinoma patients were calculated using data from Gene Expression Omnibus (GEO). Patient samples were split into four groups regarding expression of the indicated genes (median as cutoff value). These four patient cohorts were compared by a Kaplan-Meier survival plot and logrank P values were calculated.

The statistical analysis was performed with GraphPad Prism 5.0 using the unpaired Student’s t-test, and p<0.05 was considered to be significant.

We thank A. Schreilechner for excellent technical assistance. B.G. was supported by the NVKP_16-1-2016-0037 grant of the National Research, Development and Innovation Office, Hungary. Christiane Klec is a fellow of the Doctoral College “Metabolic and Cardiovascular Disease” at the Medical University of Graz and was funded by the FWF (W 1226-B18, DKplus Metabolic and Cardiovascular Disease; P P 28529-B27) and by Nikon Austria within the Nikon-Center of Excellence, Graz. Microscopic equipment is part of the Nikon-Center of Excellence, Graz that is supported by the Austrian infrastructure program 2013/2014, Nikon Austria Inc., and BioTechMed, Graz.