Glioblastoma (GBM) is the most common primary brain tumor and among the most lethal forms of human cancer [1, 2]. Recent studies demonstrated that collagen gene expression and structural alterations are involved in GMB pathogenesis [3–5], Collagen XVII expression is upregulated in glioblastomas and promotes tumor cell adhesion [4], and the architecture of collagen in GBM are associated with patient survival [5].

In the nervous system, Collagen XVII has been found to be often co-localized with its epithelial ligand BPAG1 and complexing with various laminins, in Muller glial cells, photoreceptors of bovine and rat tissues, while localize predominantly to the soma and proximal axons of human neurons [15], its precise role in pathogenesis of glioblastoma multiforme (GBM) is unknown.

Our previous study revealed 214 fusion transcripts in 272 WHO-grade II-IV glioma patients, including 67 in-frame fusions and147 out-of-frame fusions. We further found that Reads of the PTEN-COL17A1fusion gene site were positive in two cases (CGGA-834 and CGGA-837). The clinical characteristics of CGGA-834 and CGGA-837 patients showed in Table 2. PTEN was located in the plus strand of chromosome ten, and COL17A1 was located in the antisense strand of the same chromosome. The precise breakpoints in intron 1 of PTEN and intron 14 of COL17A1 are illustrated in (Figure 1A). We measured the gene expression levels of both genes, and only COL17A1 revealed an increase in mRNA expression (Figure 1B). RNA expression increased after the fifteenth exon of COL17A1 in both CGGA-834 and CGGA-837 (Figure 1C). These results suggested that the biological role of this fusion likely act through increasing expression of COL17A1, rather than PTEN. RT-PCR for PTEN-COL17A1 was performed to further validate the existence of this fusion gene. A pair of primers crossing the fusion site, located at intron 1 of PTEN and intron 14 of COL17A1, was designed. PCR amplification and Sanger sequencing crossing the breakpoint of CGGA_837 samples were applied (Figure 1D). The results confirmed the existence of the fusion event in the sample, consistent with the results of the RNA-Seq analysis. Unfortunately, due to the lack of a sufficient amount of tissue, we were not able to validated fusion gene in sample CGGA_834.

Table 1: The sequence of siRNA used in this study

Real-time PCR was performed on five glioma cell lines, including U251, U87, H4, LN229, and U118, and the normal human astrocyte cell line HA. All cell lines showed COL17A1 expression. U251 showed the highest expression of COL17A1 (Figure 3A), and this cell line was chosen for further studies. The U251 cell lines were treated with COL17A1 siRNA, and COL17A1 knockdown was observed following 48 hours after siRNA transfection. Quantitative real-time PCR and western blot analysis showed that si-COL17A1-1 and si-COL17A1-3 exhibited the most effective knockdown effects (P<0.01) (Figures 3B-3C). 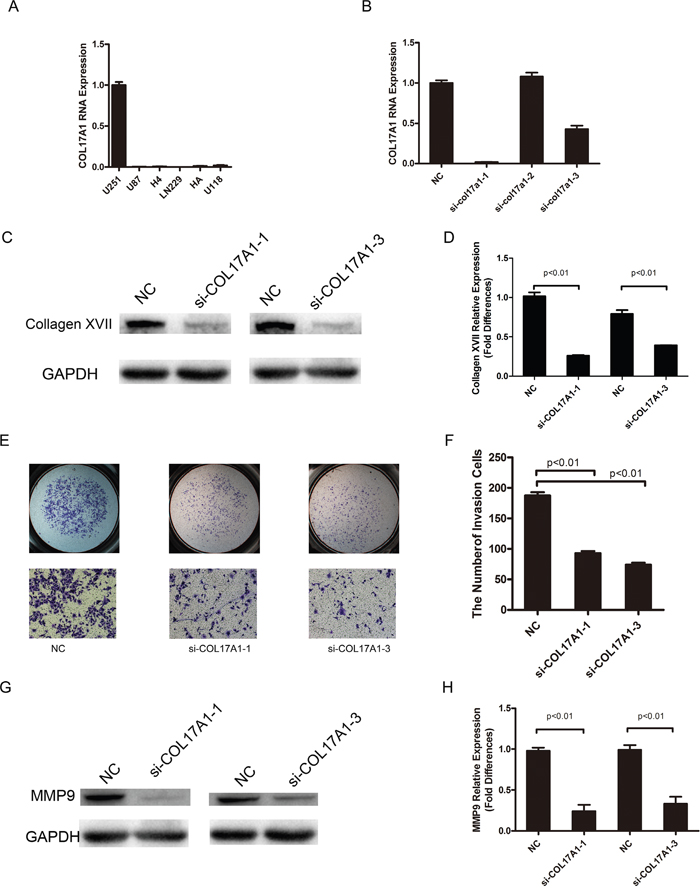 We next performed matrigel and migration assays to examine how Collagen XVII expression affects the invasion and migration of glioma cells. The invasiveness of U251 cells decreased following COL17A1 reduction compared to cells transfected with non-targeting siRNA (P<0.01) (Figure 3A), and MMP9 expression was significantly reduced after knocking down COL17A1 (P<0.01) (Figure 3E), while COL17A1 knockdown had little effects on the rate of migration in U251 glioma cell lines.

We also performed COL17A1 gene transfection experiments to further determine the influence of Collagen XVII expression on their invasive abilities of glioma cell lines. Western blot analysis measured the protein expression of COL17A1 in H4 cells or U87 after transfected with pcDNA3.1- COL17A1 or pcDNA3.1-NC vectors (P<0.01) (Figure 4A). We employed cell invasion assays to determine effects of COL17A1 over-expression on malignant progression and metastasis. The results showed that numbers of migratory H4 and U87 cells which transfected with pcDNA3.1- COL17A1 vectors were significantly higher compared to the pcDNA3.1-NC groups after transfected for 48h (P<0.01) (Figure 4B), and the protein expression of MMP9 was significantly increased after expression of COL17A1 (P<0.01) (Figure 4C), (Figure 4D). Rac1 is a member of the Rho family of small GTPases, and a upstream regulator for MMP9 gene expression [21, 22]. We thus examined Rac and its activated form (GTP-Rac1) expression. As shown in Figures 4D, 4E, COL17A1 expression directly affects activated form of Rac expression, indicating that COL17A1 regulate MMP9 expression likely through GTP-Rac1 activity in glioma, Together these data demonstrated that Increased Collagen XVII expression promotes the invasive activities of glioma cells. 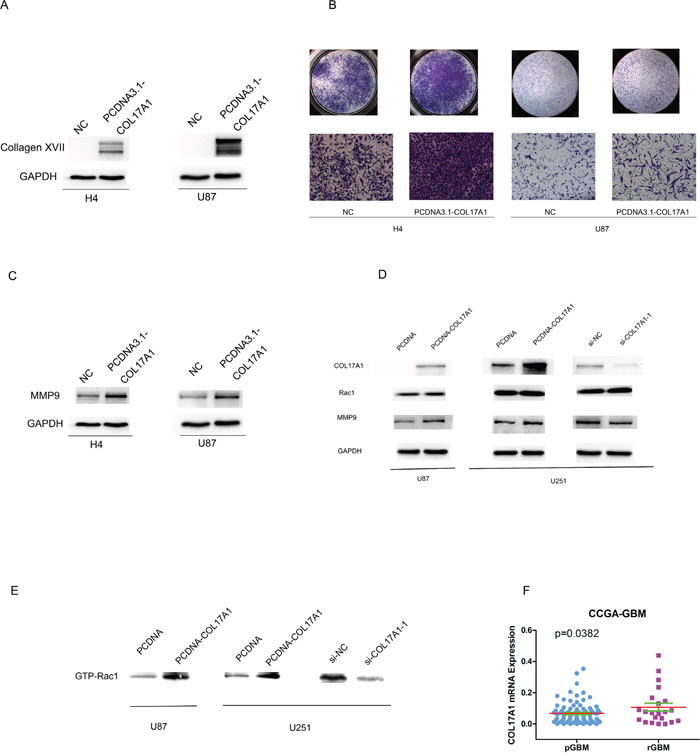 Chromosomal translocations leading to production of oncogenic fusion proteins, and play important roles in the pathogenesis of human cancer [3]. In current study, we further identified and characterized a new PTEN-COL17A1 fusion gene in human gliomas. GMB is known for its heterogeneity [4, 5, 15, 23], which enables this cancer with an ability to adapt to and evade the anti-tumor therapy. 3.1% of GBMs harbors oncogenic chromosomal translocations that fuse in-frame the tyrosine kinase coding domains of FGFR1 or FGFR3 to the transforming acidic coiled-coil (TACC) coding domains of TACC1 or TACC3 [17], here we reported less than 1% of GMB positive of PTEN-COL17A1gene fusion, further reflecting the diversity of GMB, demonstrating the importance of precise diagnosis and therapy for each individual patient. More importantly, we revealed a novel mechanism for fusion gene to regulate gene expression and tumor pathogenesis. Instead of acting through fusion protein production it can also could use other mechanism to influence expression of genes important in tumor pathogenesis, in this case, upregulate COL17A1 expression.

It has been found that COL17A1 is expressed in malignant but not in benign melanocytic tumors [13], recent reports also showed the expression of COL17A1 in colon epithelium and the association of increased COL17A1 expression with poor outcome in colorectal carcinoma [14]; suspension survival mediated by PP2A-STAT3-COLXVII determines tumor initiation and metastasis in cancer stem cells [24], demonstrating its important role in tumor pathogenesis. In this study, three glioma cell lines were transiently transfected with corresponding si-RNA or gene expression plasmid for COL17A1, we showed that increased or decreased COL17A1 expression resulted in increased or decreased tumor invasiveness, along with significant increment or reduction of MMP9 expression (Figures 3-4), demonstrating an important role of Collagen XVII in promoting cell invasion through the MMP9-hydrolyzed cell matrix, pointing to an important role of Collagen XVII in GMB malignance and recurrence.

RNA-Sequencing analysis showed that PTEN was not significantly changed in the samples (CGGA-834, CGGA-837) with positive PTEN-COL17A1 fusion gene expression. Although we were not able to detect full-length PTEN-COL17A fusion protein by Western blotting, RNA sequencing analysis revealed that the expression of the 3'UTR of the PTEN-COL17A1 fusion significantly increased (Figure 1C), and western blot analysis showed that COL17A1 protein expression significantly increased in CGGA-837 compared with controls. Thus, the biological role of this fusion is likely acting through increasing expression of COL17A1.

In summary, in the present study, RNA sequencing analysis revealed existences of the PTEN-COL17A1 fusion gene in GBM. COL17A1 expression was significantly increased in PTEN-COL17A1 fusion gene-positive samples, COL17A1 could promote cell invasion through the MMP9-hydrolyzed cell matrix, and increased Collagen XVII expression are associated with GBM recurrences. We also revealed a novel mechanism for fusion gene to regulate gene expression through increasing 3'UTR of expression, and demonstrated that COL17A1 could serve as a novel prognostic biomarker and therapeutic targets for GBM.

Clinical specimen collection was approved by the institutional review board (IRB) at Tiantan Hospital in accordance with the principles expressed at the declaration of Helsinki. Consent was obtained from each patient prior to specimen collection. The data do not contain any information that might lead to the identification of the patients.

The specimens used in experiments included one CGGA-837 sample, in which the PTEN-COL17A1 fusion was positively detected by transcriptome sequencing; 7 GBM specimens; and 3 non-tumor brain tissue samples derived from non-tumor patients after the removal of brain tissue for decompression.

A forward primer targeting the PTEN gene prior to the fusion site (5'-ATTTCAGCGTATGTTGGTCTCTACAC -3') and a reverse primer targeting the COL17A1 gene (5'- GAAGTCAAGGTGGACAACAATCATATT-3') were designed to detect the fusion transcripts. PCR was performed using the following procedure: 95˚C for 2 min, followed by 35 cycles of 95˚C for 30 sec, 59˚C for 30sec and 72˚C for 30 sec, with a final step at 72˚C for 5 min. The presence of the fusion gene in the CGGA-837 sample was confirmed using direct Sanger sequencing.

The cDNAs were amplified by qRT-PCR using SYBR Select Master Mix(Applied Biosystems, Carlsbad, CA, USA) on an ABI PRISM 7000 Sequence Detection System (Applied Biosystems, Foster City, CA, USA) with the forward primer 5'- TTACCCGCCATGCGTATGAAG-3' and reverse primer: 5'- CAGTCGAACTCGAATTTCACTCT-3'. qRT-PCR was performed using the following procedure: an initial denaturation step at 95°C for 5 min, followed by 40 cycles of denaturation at 95°C for 15 sec and elongation at 60°C for 45 sec. The comparative 2-ΔΔCt method was used for relative quantification, and statistical analysis with glyceraldehyde-3-phosphate dehydrogenase (GAPDH) was used as the endogenous control.

An admixture of 12μl of Matrigel (Corning Incorporated Life Sciences, Tewksbury, MA, USA) and 48 μl of DMEM/F12 medium was added to transwell (Corning Incorporated Life Sciences, Tewksbury, MA, USA). The lower chamber of the transwell was filled with the DMEM/F12 medium supplemented with 10% FBS. The cells were incubated at 37°C for 24 h in with 5% CO2 and subsequently stained with crystal violet. The migrated cells that migrated into the lower surface were counted. Cells in five random fields of view at 100 × magnification were scored as the average number per field of view.

The gene expression data of 87 Primary Glioblastoma multiforme (pGBM) patients and 22 recurrent GBM (rGBM) patients obtained from CGGA. The GraphPad Prism 5.0 statistical software was used to assess the statistical significance between pGBM and rGBM. Student’s two-tailed t test was used to determine significant differences. All data are presented as the mean ± standard error. The value was considered statistically significant at p<0.05.

We state that no conflicts of interests exist in this study.