Oral cancer is the sixth most common malignant tumors worldwide, with more than 90% of oral cancers in squamous cell carcinoma type [1]. There are approximate 500,000 new cases diagnosed with oral squamous cell carcinoma (OSCC) annually and more than 250,000 cases died every year [2]. The overall 5-year survival rate of oral cancer remains around 50% despite the advances of radiotherapy and chemotherapy in recent decades [3]. Oral leukoplakia (OLK) is one of the most prevalent oral precancerous lesions of OSCC and increases the risk of OSCC development at a malignant transformation rate of 0.13-17.5% [4, 5]. Therefore, it is critical to monitor OLK development and reduce the prevalence of OSCC through reversal of OLK by clinical interventions.

In our previous studies, we observed an overexpression of Peroxiredoxin 1 (Prx1), α3 and α7nAChRs in SCC15 cells exposed to nicotine [18]. We also found that Prx1 was involved in OLK pathogenesis by providing resistance against extracellular damages from oxidative stress via inhibition of apoptosis signal-regulating kinase 1 (ASK1) [19]. However, the data about the functional role of Prx1 in nicotine-related oral precancerous lesions are limited. In the current study, we assessed nAChR/Prx1 axis in vitro and in 4-nitroquinoline 1-oxide (4NQO) or 4NQO + Nicotine – induced oral precancerous lesions in wild-type (Prx1+/+) and Prx1 knockdown (Prx1+/-) mice.

Nicotine upregulates the expression of Prx1, α3nAChR and α7nAChR in vitro 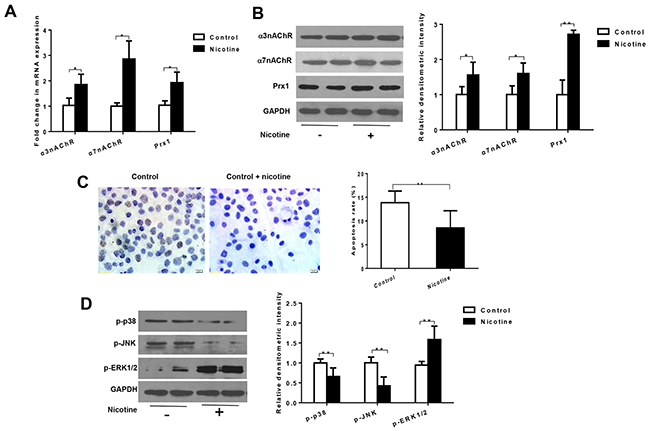 Nicotine suppresses apoptosis and modulates phosphorylation of p38, JNK and ERK in vitro

Nicotine suppresses apoptosis depending on Prx1 in vitro 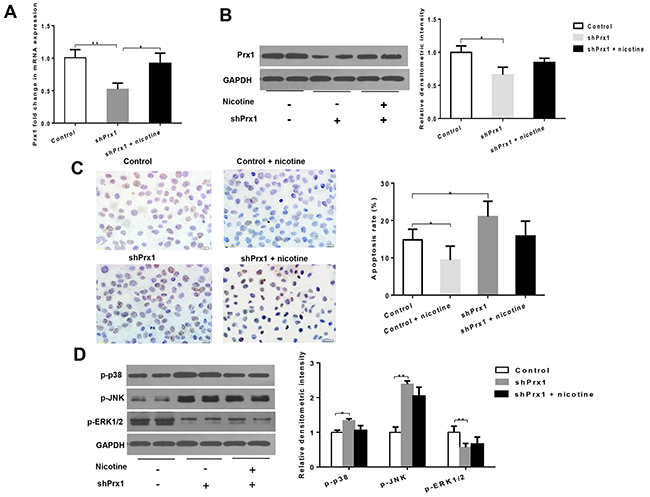 Nicotine suppresses apoptosis depending on α7nAChR but not α3nAChR in vitro 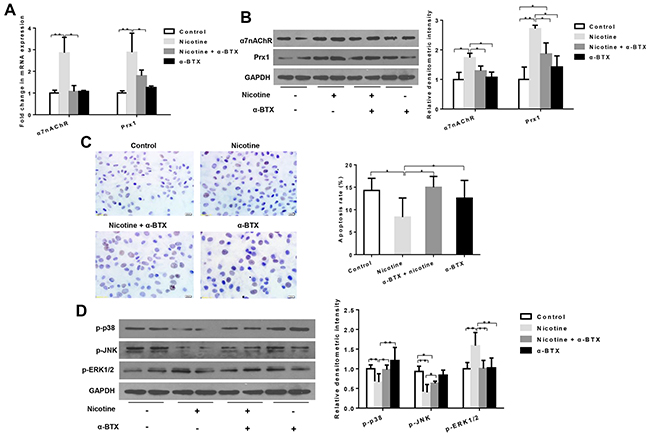 Figure 4: Histopathology of mouse tongue in animals treated with nicotine, 4NQO or ANQO plus nicotine. (A) the representative images of entire tongue collected from Prx1 wild-type and Prx1 knockdown mice; and (B) the representative H&E staining of mouse tongue including normal, hyperplasia, dysplasia, carcinoma in situ and OSCC (magnification x 200).

Nicotine and Prx1 promote the progression of tongue precancerous lesions

Table 1 Histological evaluation of mouse tongue in animals treated with nicotine, 4NQO or 4NQO plus nicotine

Nicotine plus 4NQO increases the expression of Prx1, α3nAChR and α7nAChR, and induces apoptosis in wild-type mice 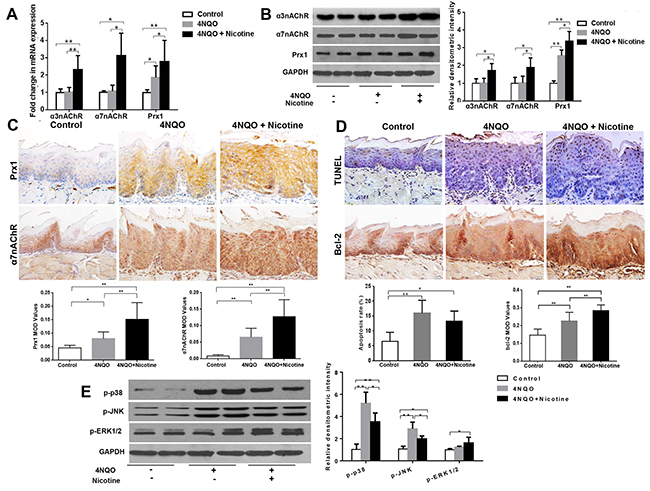 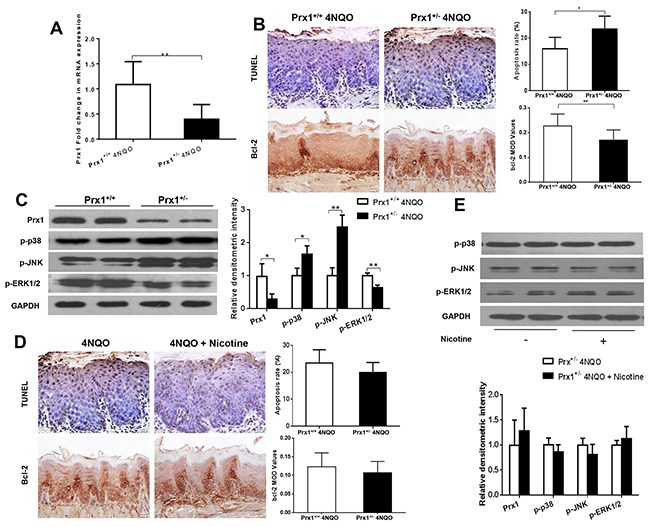 Cell apoptosis is a critical cellular event in oral carcinogenesis. Bcl-2 has been identified as a key regulator of apoptosis, which is overly expressed in OLK and oral lichen planus [20, 21]. Apoptosis-related upstream regulators, such as Aurora A, phospho-MEK1/2 and phospho-ERK1/2, are closely correlated with malignant transformation of OLK [22]. One of the tumor-promoting activities of nicotine is to inhibit apoptosis. Our study shows that nicotine significantly inhibits apoptosis in DOK cells and 4NQO-induced tongue precancerous lesions in Prx1 wild-type mice. Moreover, we found that after Prx1 knockdown, the inhibition of apoptosis by nicotine is attenuated. Prx1 knockdown inhibits precancerous lesion development. The cell apoptosis is increased by Prx1 knockdown both in vivo and in vitro. These results demonstrate that nicotine inhibits apoptosis by upregulating Prx1 in oral precancerous lesions.

Prx1 is a member of the thiol-specific peroxidases family and plays diverse roles including H2O2 scavenger, redox signal transducer, molecular chaperone and oncogene [23]. Prx1 regulates several cell biological processes including cell differentiation, proliferation, and apoptosis. Some studies show that Prx1 protects cancer cells by suppressing oxidative-stress associated apoptosis [24, 25]. Nicotine can induce oxidative stress and has a positive feedback on regulating Prx1 in OSCC and oral precancerous lesions [26, 27]. In this study, we found that nicotine upregulates α3nAChR and α7nAChR in oral precancerous lesion cells. To further elucidate the association between nAChR and Prx1, we assessed Prx1 and apoptosis after α3nAChR and α7nAChR were blocked respectively. α-Neurotoxin, such as α-BTX, is a specific inhibitor of α7nAChR and binds tightly to α7nAChR through interacting between Tyr184 and local residues to high-affinity subtype-selective α-BTX binding. In this study, we also found that α-BTX significantly reduces nicotine-induced overexpression of α7nAChR and Prx1, and activates apoptosis. α3nAChR knockdown, however, has little effects on Prx1 and apoptosis.

Nicotine promotes lung carcinogenesis through binding to α3, α5, β4 and α7nAChR and subsequently activating cell proliferation, apoptosis, angiogenesis and tumor invasion [28]. Activation of cell membrane nAChRs via α7 and β2 subunits is associated with increased expression of cyclin D1 and phosphorylation of ERK1/2, inhibition of mPTP opening and resistance to H2O2-induced apoptosis in oral and lung cancers [15]. Activation of α7, α3, α4 and α9 nAChR produces growth-promoting and anti-apoptotic signaling that implements the tumor-promoting action of nicotine on lung cells [16]. There are two different pathways involved in cell apoptosis: the extrinsic pathway and the intrinsic pathway [29]. The intrinsic apoptotic pathway is controlled by Bcl-2 protein family through mitochondrial outer membrane permeabilization. The Bcl-2 family is composed of about 24 members including cell death suppressors, such as Bcl-2 and cell death inducer, such as Bax [30]. Nicotine increases Bcl-2 expression in breast cancer cell line MCF-7 cells [31]. Cytocrome c is the key component binding to form apoptosome in cytosolic and initiates caspase activation [30]. α7nAChR is expressed on mitochondrial outer membrane. The activation of α7nAChR on mitochondrial can prevent cytochrome c release, thus, blocks intrinsic apoptosis [32, 33]. In addition, activation of nAChRs can activate p38 MAPK, AKT, RAS/RAF/MERK/ERK/JAK2 signaling pathways. Theses molecular events are involved in nicotine-promoted carcinogenesis [34-37].

ASK1 is a member of mitogen-activated protein kinase kinase kinase family (MAP3K), also called MAP3K5. ASK1 activates downstream MAPK in response to oxidative stress and induces the cascades of cellular responses including apoptosis, differentiation, cell survival, and production of inflammatory cytokines [38-40]. Numerous studies show that the ASK1/MAPK pathway is involved in tumorigenesis through regulating inflammation, cell proliferation and apoptosis [41, 28]. In our previous study, we found that Prx1 inhibited ASK1-induced apoptosis in OLK [19]. However, the association between Prx1 and ASK1’s downstream MAPK has not been fully studied. The current study extends the previous pilot investigation through a more rigorous mechanistic study. Our data show that nicotine inhibits apoptosis through upregulation of α7nAChR and Prx1, and suppression of p38 MAPK, JNK and ERK signaling.

In conclusion, this is the first study to elucidate the function of nAChR/Prx1 axis in nicotine-related oral precancerous lesions in mice. Our results indicate that nicotine promotes oral precancerous growth through suppression of apoptosis via upregulating α7nAChR and Prx1. These findings are important because they provide experimental supports that the nAChR/ Prx1 axis may serve as a new target for treatment of oral OLK and thus, prevent OSCC in humans.

Wild type C57BL/6 mice were purchased from Vital River Laboratory Animal Technology (Beijing, China). Prx1 knockout mice, 6-8 weeks old, were used in this study [42]. All animals were kept in accordance with institutional guidelines under standard conditions. The experimental protocol was approved by the ethical committee for animal use. The experimental mice were randomly divided into eight groups (Table 1). Wild type mice (Prx1+/+) in Groups 1, 3, 5 and 7 received the treatment of the vehicle (distilled water; Group 1), 5% nicotine smeared on tongue mucosa (x3/week; Group 3), 50 μg/mL 4NQO (Group 5), or 4NQO + nicotine (Group 7). The Prx1 knockout mice (Prx1+/-) were randomized into four groups (Groups 2, 4, 6 and 8). At the end of bioassay (16 weeks), mouse tongues were removed after euthanasia and cut in half. One half was immediately stored in liquid nitrogen for future molecular/cellular analysis, and the other half was fixed in formalin to prepare paraffin-embedded tissue blocks.

Apoptosis was examined by using In Situ Cell Death Detection Kit, POD (Roche, Germany) according to the manufacturer’s instruction. The slides were deparaffinized with histoclear and rehydrated in graded ethanol (100–70%). In the cell experiments, cell growing on the glass slide was fixed by paraformaldehyde. The specimens were subjected to PBS washing for 2 times with 5 min each time, and incubation at 37 ºC for 15 min by proteinase K. Dry specimens were dropped in 50 μL of TUNEL reaction mixture, hydrated at light-free condition and incubated at 37 ºC for 60 min. The PBS washed for 3 times with 5 min each time. The dry specimens were then dropped in 50 μL of converter-POD and incubated at 37 ºC for 60 min. Freshly prepared DAB solution was used to incubate the specimens for 20 minutes. The apoptosis rates were detected by Image Pro.

Mouse tongue tissues were fixed in 10 % neutral formalin for 24 h, serially sectioned at 4 μm, and processed for immunohistochemistry. Deparaffinised sections were briefly heated for 10 min in a pressure cooker containing 10 mM citrate buffer (pH 6.0) for antigen retrieval, and followed by 3 % H2O2 in 0.1 M TBS (pH 7.4) for 15 min to quench endogenous peroxidases. The sections were then treated with protein block solution (Boshide, China) for 20 min and incubated with anti-Bcl-2 antibody (1:200), Prx 1 (1:50) and α7nAChR (1:50) overnight at 4ºC. Incubation with primary antibody was followed by incubation with secondary anti-rabbit GT VisionTM polymer (Gene Tech, South San Francisco, California, USA) for 30 min. Finally, slides were treated with chromogen diaminobenzidine (DAB) (Dako, Carpinteria, CA, USA), counterstained with haematoxylin, dehydrated, and mounted for further Olympus BX61 microscope observation (Olympus, Tokyo, Japan). To assess the protein expression in each tongue, five random areas within a section were selected at 200 x× magnification. The arithmetic mean proportion of positive cells of the five areas represented the protein expression.

31. Aali N, Motalleb G. The effect of nicotine on the expressions of the α7 nicotinic receptor gene and Bax and Bcl-2 proteins in the mammary gland epithelial-7 breast cancer cell line and its relationship to drug resistance. Cell Mol Biol Lett. 2015; 20: 948-64.