Angiogenesis, the process through which new blood vessels sprout from pre-existing ones, is one of the hallmarks of cancer [1]. Recently, abundant evidence has indicated that ovarian cancer progression has close interactions with angiogenesis [2–5]. Indeed, angiogenesis is induced early and remained on during the multistage development of ovarian cancer, providing nutrients and oxygen for sustained neoplastic growth [2]. In turn, ovarian cancer cells have also been shown to be essential for regulating tumor-associated angiogenesis by secreting a series of proangiogenic growth factors into the tumor microenvironment [3]. Besides, increased angiogenesis was associated with increased risk of disease progression in the patients with advanced-stage epithelial ovarian cancer (EOC) [4]. Moreover, anti-angiogenic therapy with Bevacizumab, a humanized recombinant antibody against vascular endothelial growth factor (VEGF), revealed a more pronounced progression-free survival in the patients with advanced EOC [5]. However, the current understanding of molecular mechanisms of ovarian cancer angiogenesis remains incomplete.

Sphingosine kinase (SphK), the key enzyme to produce sphingosine-1-phosphate (S1P), exhibits two isoforms, SphK1 and SphK2. SphK1 has emerged as a significant signaling enzyme because it contributes to the growth, metastasis and chemoresistance of various human cancers [6, 7]. The “inside-out” model is widely used to explain the function of SphK1/S1P/S1P receptor (S1PR) signaling, which propose that intracellular S1P, generated by SphK, is secreted into the extracellular milieu and then activates cell surface S1PRs through autocrine and paracrine manners, leading to the activation of downstream signals [8]. However, the function of SphK2 has been less investigated and its roles and mechanisms in cancer remain largely unknown. In our previous study, we found that the level of SphK1 was significantly increased in ovarian cancer tissues [9]. Besides, earlier studies showed that the plasma S1P level was elevated in patients with ovarian cancer and decreased after tumor removal surgery [10]. Moreover, S1P has been shown to be involved in vascular tube formation process, including vascular maturation [11] and permeability [12]. Therefore, we hypothesized that SphK/S1P/S1PR signaling pathway may have an important influence on the angiogenic process of ovarian cancer. 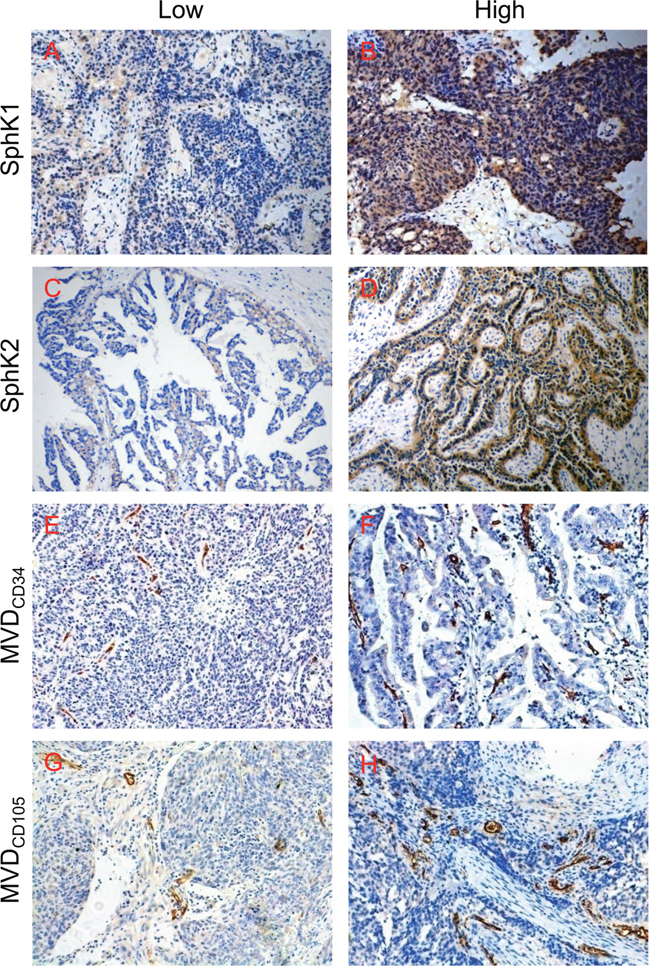 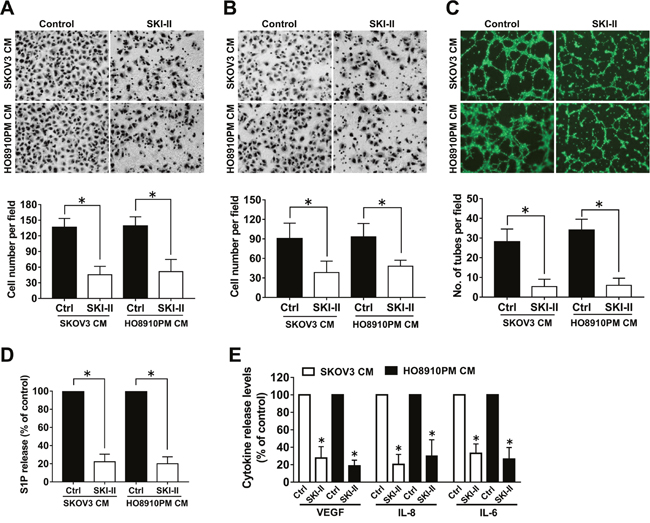 Figure 2: Effect of SphK inhibition by SKI-II on angiogenesis in vitro. (A) Cell migration assay. Endothelial cells were stimulated with the culture media (CM) collected from the ovarian cancer cells precultured with or without SKI-II (2.5μM). The migrated cells were stained, photographed and counted. (B) Cell invasion assay. Endothelial cells were stimulated with CM, the invaded cells were photographed and counted. (C) Tube formation assay. Endothelial cells suspended in CM were placed on the matrigel to form tube like structures, which were then photographed and quantificated. (D) Effect of SKI-II on the S1P secretion of ovarian cancer cells. (E) Effect of SKI-II on the VEGF, IL-8 and IL-6 secretion of ovarian cancer cells. All experiments were repeated three times, with three replicates in each group (* p<0.05 vs. Control group).

SphK1, but not SphK2, was responsible for the angiogenic potential of ovarian cancer cells 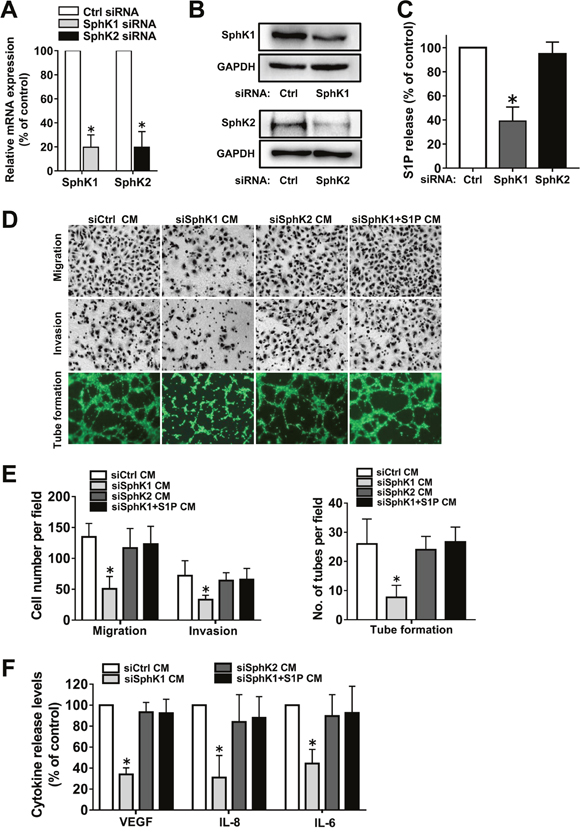 Figure 3: Effect of SphK1 or SphK2 blockage on angiogenesis in vitro. (A) SKOV3 cells were transfected with control-siRNA, SphK1-siRNA or SphK2-siRNA. Expression of SphK1 or SphK2 mRNA levels were determined by PCR and normalized to GAPDH mRNA. (B) Protein levels of SphK1 and SphK2 were determined by western blot. (C) S1P levels in the culture media (CM) from siRNA transfected cells were determined by ELISA. (D) Representative images of the migration, invasion and tube formation assays. Endothelial cells were stimulated with the CM collected from siRNA transfected cells with or without S1P (1μM) addition. Migrated cells, invaded cells and tube like structures were photographed. (E) Statistical analysis of the migrated cells, invaded cells and tube like structures. (F) Effect of siRNA transfection with or without S1P addition on the VEGF, IL-8 and IL-6 secretion of ovarian cancer cells. All experiments were repeated three times, with three replicates in each group (* p<0.05 vs. Control group). 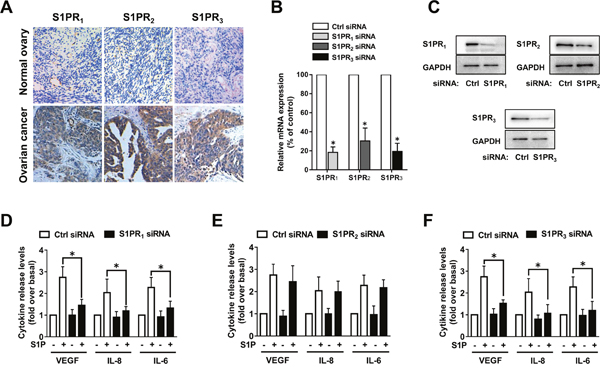 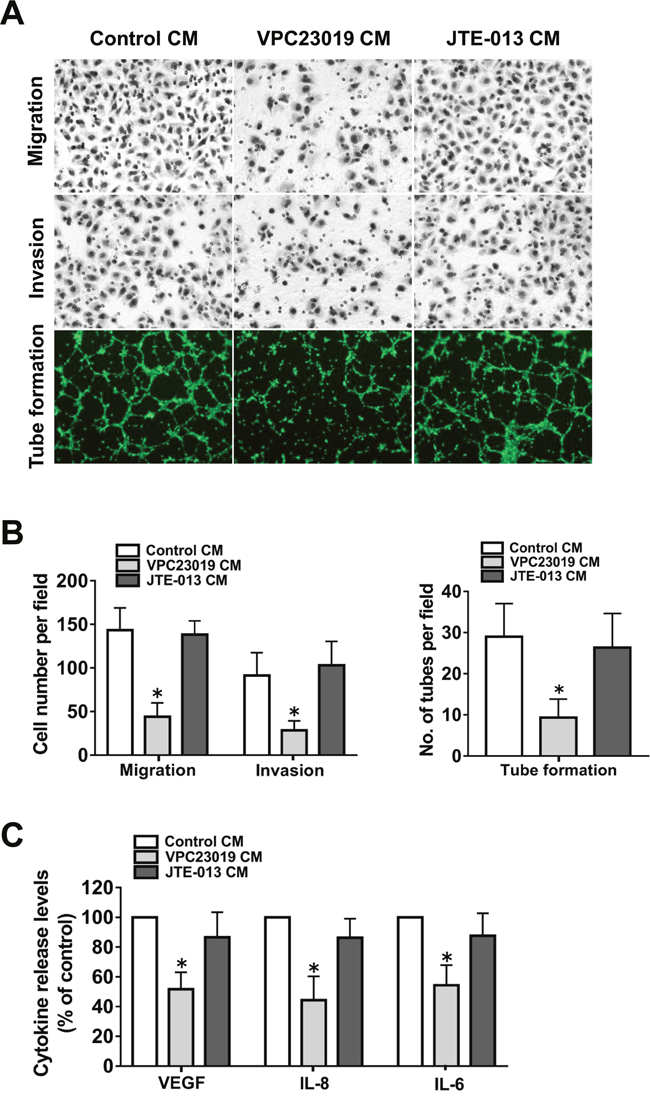 Figure 5: Effect of S1PR1-3 inhibition on angiogenesis in vitro. (A) Representative images of the migration, invasion and tube formation assays. Endothelial cells were stimulated with CM collected from the ovarian cancer cells precultured with VPC23019 (300nM) or JTE-013 (1μM). Migrated cells, invaded cells and tube like structures were photographed. (B) Statistical analysis of the migrated cells, invaded cells and tube like structures. (C) Effect of VPC23019 and JTE-013 on the VEGF, IL-8 and IL-6 secretion of ovarian cancer cells. All experiments were repeated three times, with three replicates in each group (* p<0.05 vs. Control group).

Effect of SphK blockage on ovarian cancer angiogenesis in vivo

In light of the in vitro data, we hypothesized that SphK blockage may also inhibit ovarian cancer angiogenesis in vivo. Ovarian cancer mouse models were intraperitoneally injected with SKI-II twice a week. SKI-II injection resulted in significantly decreased tumor number and tumor weight (Figure 6A-6C). Inspection of the tumors harvested from the experimental group revealed that tumors were smaller and less vascularized in the SKI-II group than those in PBS group (Figure 6A). The microvascular density (MVD) in the largest tumor of each mouse was characterized by immunohistochemical (IHC) staining using CD31, CD34 and CD105 antibodies that specifically recognize endothelial cells. The results revealed decreased MVD in the SKI-II group (Figure 6D-6E). The angiogenic factor expression levels in the tumor tissue were also characterized by IHC staining. The results showed that SKI-II administration significantly inhibited the VEGF, IL-8 and IL-6 levels in mouse models (Figure 6D and 6F). Moreover, the levels of S1P in tumor tissue were tested by ELISA. S1P levels were markedly decreased in the SKI-II treated group compared with the PBS group (Figure 6G). The above results indicated that the tumor growth, tumor angiogenesis, S1P and angiogenic factor expression of ovarian cancer could be blocked by SphK inhibitor in vivo. 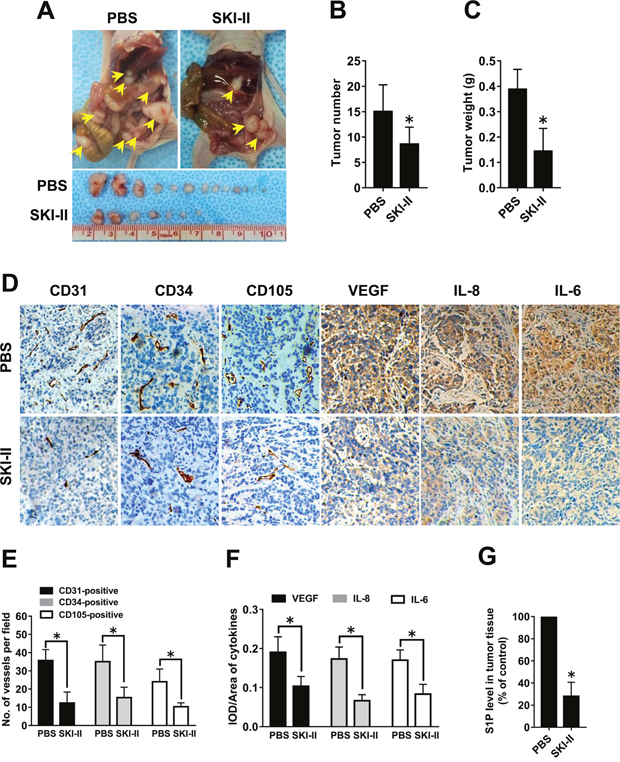 Effect of S1PR1/3 blockage on ovarian cancer angiogenesis in vivo

We found that S1PR1 and S1PR3, but not S1PR2, were responsible for the angiogenic potential and angiogenic factor secretion of ovarian cancer cells in vitro. Therefore, we further determined whether S1PR1/3 also regulated in vivo angiogenesis by intraperitoneally injecting the mouse models with S1PR1/3 antagonist VPC23019. We found that the tumor number and tumor weight were significantly inhibited by VPC23019 administration (Figure 7A-7C). Besides, the results of IHC showed that VPC23019 administration inhibited the MVD level and the angiogenic factor expression in mouse models. These results suggested that S1PR1/3 antagonist could block the tumor growth, tumor angiogenesis and angiogenic factor expression of ovarian cancer in vivo. 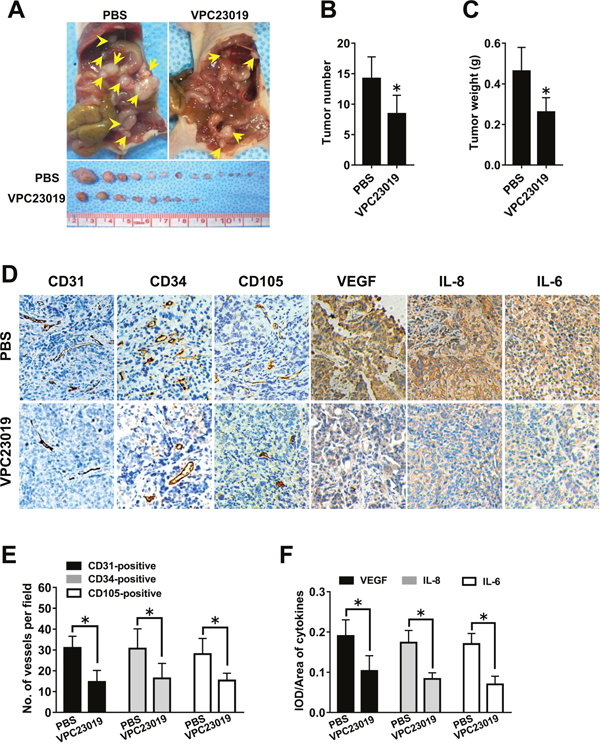 Human ovarian cancer cell lines (SKOV3 and HO8910PM) were bought from American Type Culture Collection (ATCC) and Cell Bank, Chinese Academy of Sciences. The human umbilical vein cell line (EA.hy926) was purchased from ATCC. These cells were cultured in DMEM complete media. When agonists or antagonists were used, cells were serum-starved overnight prior to treatment. Unless otherwise indicated, the drug-containing medium was replaced with the drug-free medium after the cells were pretreated for 12 hours.

The animal studies were approved by the Institutional Animal Care and Use Committee of Shanghai Jiao Tong University School of Medicine. Female BALB/c nu/nu mice aged 6 weeks were ordered from the Chinese Academy of Sciences. To establish intraperitoneal transplantation models, 8 mice in each group were intraperitoneally injected with 5×106 SKOV3 cells. 10 mg/kg b.w. SKI-II or 0.2 mg/kg b.w. VPC23019 was administered into mice twice per week starting on day 7 after the injection of SKOV3 cells. 30 days after injection of tumor cells, the mice were sacrificed and the weight and number of visible tumors were calculated.

Formalin-fixed, paraffin-embedded specimens were used for immunostaining. Briefly, tumor sections were dewaxed and then rehydrated. The slides were heated near the boiling stage by microwave. After blocking, the slides were incubated with each primary antibody. Sections were then incubated with secondary antibody followed by treatment with 3, 3'-diaminobenzidine and counterstaining with hematoxylin. The intensity of immunostaining was scored as follows: strong (3), moderate (2), weak (1), or negative (0). The proportion of positively stained tumor cells was assessed as follows: no positive tumor cells (0), <25% (1), 26–50% (2), 50–75% (3), and >75% (4). Staining index (SI) was calculated as staining intensity score × proportion score. The protein expression level was considered to be high when score was >3, and low when score was ≤3. Software Image-Pro Plus 6.0 was also used to calculate the immunostaining intensity.

Quantification of microvasculature density was performed as described before [36, 37]. Microvessels were identified by CD31, CD34 or CD105 staining. After immunostaining, the entire section was scanned at ×40 magnification to find the hot-spots, regions with the highest vascular density. The number of CD31-positive, CD34-positive or CD105-positive vessels were counted in hot spots at ×200 magnification, and then the mean value was calculated, which were then taken as the MVDCD31, MVDCD34 or MVDCD105. The mean MVD value of all the samples was used to classify samples in high or low MVD groups.

Transwell chambers (8 μm pore size, Corning, USA) were used to test the migration ability of the cells. The culture media (CM) were prepared from drug-pretreated ovarian cancer cells cultured in serum-free media for 24 h. Endothelial cells were re-suspended in the CM and placed into the upper chamber. The complete medium was used as a chemoattractant in the lower chamber. The migrated cells on the membrane were stained and counted after 8 h.

Transwell chambers, pre-coated with matrigel, were used to test the invasion ability of the cells. Endothelial cells, re-suspended in the indicated CM, were placed into the upper chamber. The complete medium was used as a chemoattractant. The invaded cells were counted after 24 h.

Endothelial cells were re-suspended in the indicated CM and seeded on the Matrigel pre-coated plates to form tube like structures. After 8 hours, the cells were stained with 2 μM Calcein-AM. Tube like structures were observed and quantified by counting the number of connected tubes under ×100 magnification.

Cells were harvested at 48 h post-transfection. Then we performed the western blotting as previously described [38].

Cell culture medium was collected after the indicated treatments. ELISA kits (R&D Systems) were used to determine the levels of VEGF-A, IL-8 and IL-6 according to the manufacturer’s instructions.

As previously described [39, 40], the S1P level in the tumor tissue homogenate or the culture medium was analyzed using ELISA kits (Echelon Biosciences).

Statistical analyses were performed using the SPSS software. MVD and SphK1/2 expression were examined using the Spearman correlation test. The values were presented as the mean ± SD and were analyzed by t-test or ANOVA (p<0.05 was considered significant).

LD, YL and LX conducted the experiments and analyzed the data; LD, LQ, XW and WD designed the study and wrote the manuscript.