The clinicopathological and prognostic significances of CDC73 expression in cancers: a bioinformatics analysis

CDC73 interacts with human PAF1 complex, histone methyltransferase complex and RNA polymerase II for transcription elongation and 3’ end processing. Its down-regulated expression was immunohistochemically detected in gastric, colorectal, ovarian and head and neck cancers, and positively correlated with aggressive behaviors and unfavorable prognosis of malignancies. We performed a bioinformatics analysis by using Oncomine, TCGA and KM plotter databases. It was found that CDC73 mRNA was overexpressed in gastric, lung, breast and ovarian cancers, even stratified by histological subtypes (p<0.05). CDC73 mRNA expression was stronger in gastric intestinal- than diffuse-type carcinomas (p<0.05), and positively correlated with distant metastasis and TNM staging of lung cancer (p<0.05). CDC73 mRNA expression was positively related to both overall and progression-free survival rates of the patients with gastric cancer, even stratified by gender, lymph node involvement, or treatment (p<0.05), while versa for breast cancer (p<0.05). The prognostic significance of CDC73 mRNA was dependent on the datasets and pathological grouping in lung and ovarian cancers. These findings indicated the CDC73 mRNA overexpression was positively linked to carcinogenesis. It is cautious to employ CDC73 mRNA to evaluate the clinicopathological behaviors and prognosis of cancers.

The hyperparathyroidism-jaw tumor (HPT-JT) syndrome is an autosomal dominant disorder characterized by occurrence of parathyroid tumors, atypical adenomas and carcinomas, ossifying jaw fibromas, renal tumors and uterine benign and malignant neoplasms, and caused by HRPT2 (also called CDC73) mutation. It is located on human chromosome 1q31.2 and encodes a 531-aa parafibromin [1]. In nucleus, parafibromin interacts with human PAF1 complex (including PAF1, LEO1, and CTR9), and RNA polymerase II for transcription elongation and 3’ end processing [2, 3]. It can also bind to a histone methyltransferase complex that methylates histone H3 on lysine 4 [4]. Parafibromin methylates histone H3K9 to repress Cyclin D1 expression via the interaction with the histone methyltransferase, SUV39H1 [5]. Reportedly, the interaction between parafibromin and the ring finger proteins RNF20/40 was essential for the histone 2B monoubiquitination [6]. In cytosol, parafibromin physically binds to eEF1Bγ and hSki8 for destabilizing p53 mRNA and suppressing p53-mediated apoptosis [7]. Wei et al. [8] found that parafibromin interacted with JAK1/2, promoted the interactions of JAK1- JAK2 and JAK1/2-STAT1, and enhanced tyrosine phosphorylation of STAT1 by JAKs after IFN-γ stimulation. Kikuchi et al. [9] demonstrated that dephosphorylated parafibromin, mediated by SHP2 phosphatase and attenuated by PTK6, competitively interacted with β-catenin and Gli1, thereby potentiating transactivation of Wnt- and Hh-target genes in a mutually exclusive manner. Consequently, acute loss of parafibromin in mice disorganizes the normal epithelial architecture of the intestine, which requires coordinated activation/inactivation of Wnt, Hh and/or Notch signaling. Agarwal et al. [10] demonstrated that parafibromin bound to muscle alpha- actinins (actinin-2 and actinin-3).

Wang et al. [11] reported that HRPT2 deletion was lethal at embryonic day 6.5 (E6.5). Controlled deletion of HRPT2 after E8.5 resulted in apoptosis and growth retardation. HRPT2 deletion in adult mice led to severe cachexia and death within 20 days. Walls et al. [12] found that mice with HRPT2 deletion developed parathyroid and uterine tumors, and might be considered as a model for hyperparathyroidism-jaw tumor syndrome. Previously, we investigated the clinicopathological and prognostic significances of parafibromin expression in gastric, colorectal, ovarian, lung, head and neck cancers, and found its down-regulated expression and its inverse link with aggressive behaviors and unfavorable prognosis [13-18]. Parafibromin expression was found to negatively correlate with tumor size, pathological stage, lymphovascular invasion and C-erbB2 expression of breast cancer [19, 20]. There was an inverse correlation between lymph node metastasis or depth of invasion and parafibromin expression in urothelial carcinoma [21]. The down- regulation or loss of parafibromin expression could be also employed as a novel marker of tumor progression or aggressiveness in laryngeal squamous cell carcinoma [22]. In the present study, we aimed to explore the clinicopathological roles of CDC73 mRNA expression in various cancers using bioinformatics analysis, including gastric, lung, breast and ovarian cancers.

The clinicopathological significances of CDC73 expression in gastric cancer

We collected the results from DErrico’s, Cho’s, Chen’s, Wang’s, and TCGA’s datasets and analyzed CDC73 mRNA expression in gastric cancer. A higher CDC73 expression was found in gastric normal mucosa than that in cancer, even stratified into intestinal-, diffuse-, and mixed-type carcinomas by Lauren’s classification (Figure 1A, p<0.05). CDC73 mRNA was more expressed in intestinal- than diffuse-type carcinomas (Figure 1A, p<0.05). As shown in Figure 1 and Table 1, CDC73 mRNA expression was positively related to both overall and progression-free survival rates of the patients with gastric cancer, even stratified by gender, lymph node involvement, or treatment (p<0.05). It was the same for overall survival rate in the patients with gastric cancer, stratified by distant metastasis, or Lauren’s classification (p<0.05). A higher CDC73 mRNA expression was positively correlated with overall and progression-free survival rates of Her2-netagive cancer patients (p<0.05). Stage-I, stage-III, T2 and T3 cancer patients with high CDC73 mRNA expression showed a long overall survival time than those with its low expression (p<0.05), while it was the same for progression-free survival in the patients with stage-III and -IV, T2, M0, and diffuse-type carcinoma (p<0.05). 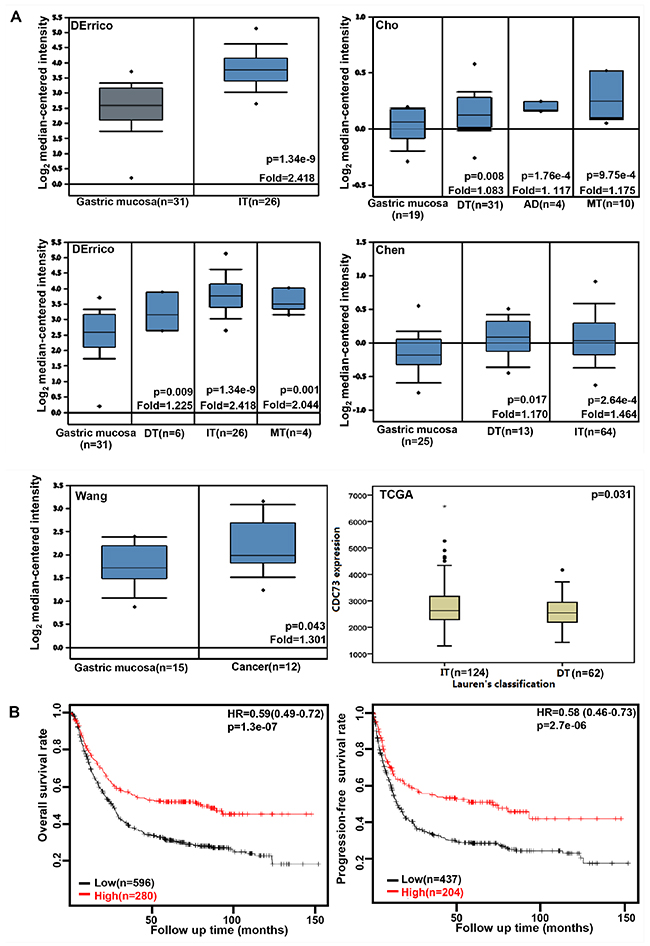 Table 1: The prognostic significances of CDC73 mRNA in gastric cancer

The clinicopathological significances of CDC73 expression in lung cancer 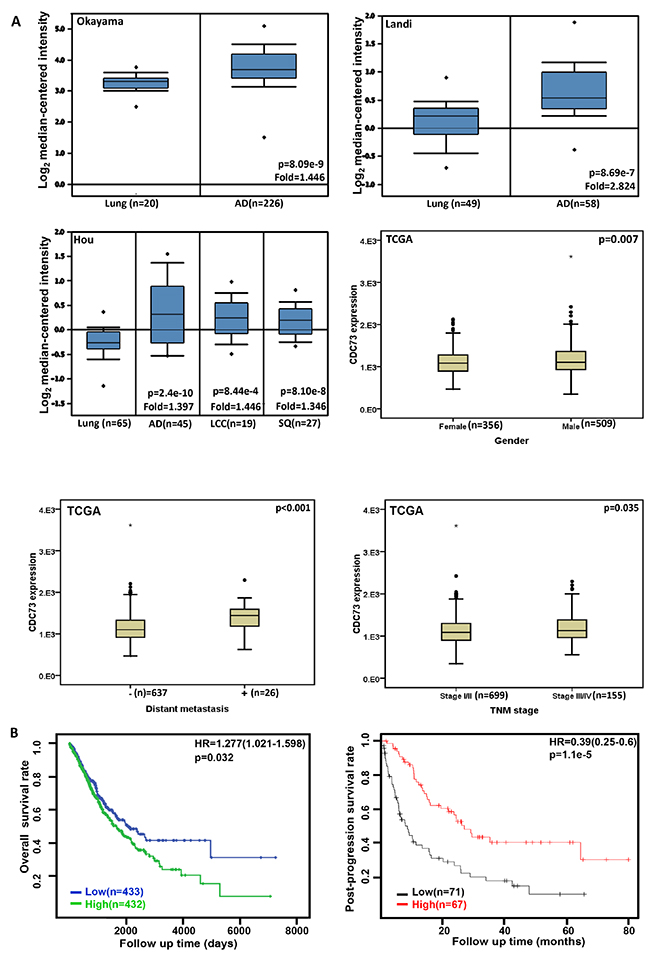 The clinicopathological significances of CDC73 expression in breast cancer 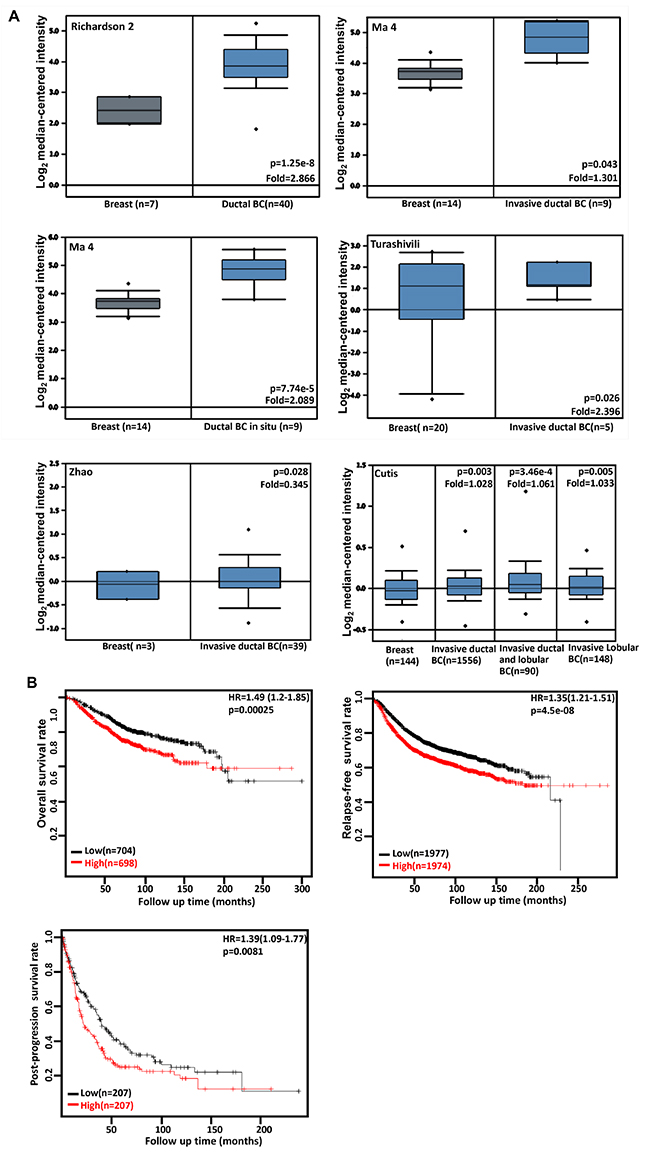 The clinicopathological significances of CDC73 expression in ovarian cancer

We performed bioinformatics analysis of CDC73 mRNA expression in ovarian cancer using TCGA’s and Hou’s datasets. There was a lower CDC73 expression in normal ovary than that in serous cystoadenocarcinoma, clear cell, endometriod, mucinous and serous adenocarcinomas (Figure 4A, p<0.05). The data from KM plotter showed a negative relationship between CDC73 mRNA expression and either overall or progression-free survival rates of the patients with ovarian cancer (Figure 4B, p<0.05). However, a positive correlation between CDC73 expression and post-progression survival rate was observed in the patients with stage-IV ovarian cancer (Figure 4B, p<0.05). 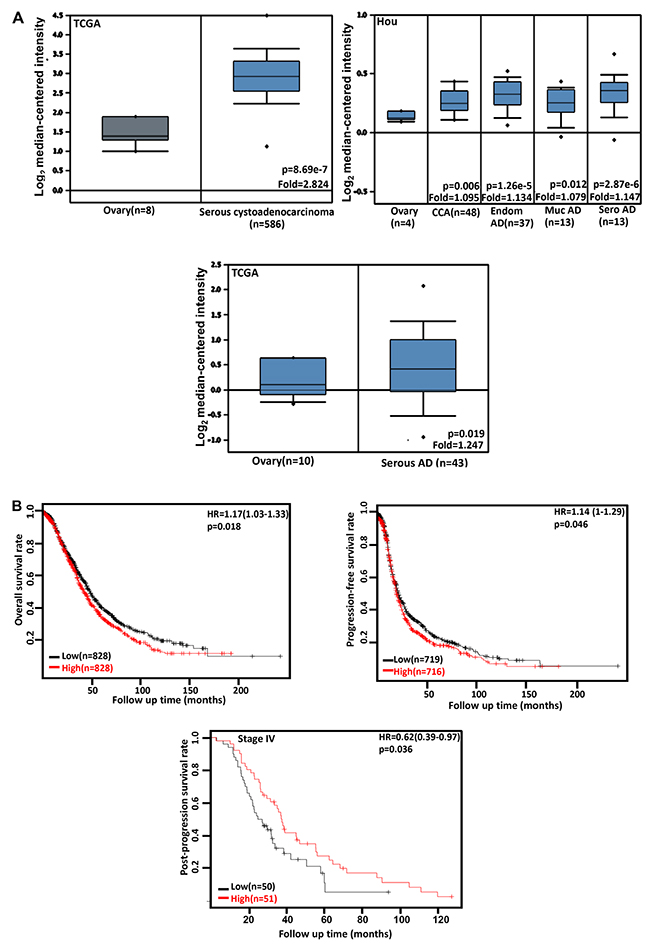 As a tumor suppressor, parafibromin inhibits colony formation and cellular proliferation, and causes G1 phase arrest in cervical cancer cells [23]. Wild-type parafibromin is located in the nucleus of osteosarcoma cells, responsible for apoptotic induction and G1 phase arrest via MEK/ERK and PI3K/Akt signaling inactivation, and Caspase activation [24]. Parafibromin knockdown results in uncleaved histone mRNA with polyadenylated tails [25], and a high proliferation by both c-myc protein stabilization and activation of the c-myc promoter [26]. In contrast, SHP2 tyrosine phosphatase converts parafibromin from a tumor suppressor to an oncogenic driver by its interaction with and subsequent stablization of β-catenin to upregulate expression of Wnt target genes, including cyclin D1 and c-myc [27]. We speculate that parafibromin plays a role of two-side sword in cancer cells.

Reportedly, parafibromin expression was down-regulated during gastric, colorectal and head and neck carcinogenesis, and inversely linked to such aggressive behaviors as tumor size, depth of invasion, lymphatic invasion, lymph node metastasis or TNM staging by inducing apoptosis and cell cycle arrest, and suppressing proliferation, migration, invasion, and epithelial-mesenchymal transition [13, 15, 18]. At mRNA level, CDC73 hypoexpression was detectable in colorectal, lung and ovarian cancers by real-time RT-PCR or in situ hybridization [15-17], but CDC73 mRNA was found to up-regulated in gastric, lung, breast and ovarian cancers by transciptomic sequencing in the present study. Additionally, it was positively correlated with distant metastasis and TNM staging of lung cancer. The paradoxical results might be due to different approaches and tissue specificity. If CDC73 mRNA overexpression was true, we concluded that its up-regulation might be a feedback reaction in malignancies or acts as an oncogene in some situation.

In line with our results, there was stronger positivity of parafibromin in gastric intestinal- than diffuse-type carcinomas [13], which also was supported by weaker parafibromin expression in signet ring cell carcinoma than the others [14]. However, Shen et al. [17] found parafibromin expression was inversely associated with the differentiation of ovarian cancers. Recently, we reported that CDC73 expression was higher in moderately- than well-differentiated adenocarcinoma at both mRNA and protein level [29], opposite to our finding. As a differentiation marker, ALP activity was increased in CDC73 transfectants of colorectal cancer cells [13, 29]. Taken together, we concluded that CDC73 mRNA underlay the molecular mechanisms of the differentiation of gastric cancer.

Parafibromin expression was found to positively correlate with favorable prognosis of gastric cancer [13] and pulmonary adenocarcinoma [16]. Immunohistochemically, parafibromin expression was employed as an independent factor for a better overall or relapse-free survival of the patients with colorectal cancer [15] or head and neck squamous cell carcinoma [18] respectively. In contrast, the converse was true for cumulative survival rate of the patients with ovarian cancer [17]. In gastric cancer, we found a positive correlation of CDC73 mRNA expression with both overall and progression-free survival rates, even stratified by gender, lymph node involvement, or treatment. In breast cancer, there was a negative association of CDC73 expression with the overall, relapse-free, post-progression or distant-metastasis-free survival rates of the patients, even in the subgroups. In TCGA database, CDC73 mRNA was inversely linked to favorable overall prognosis of lung cancer, which was determined by its positive association with aggressive parameters. However, it was the converse for KM-plotter. As for ovarian cancer, the prognostic significance of CDC73 expression was dependent on pathological grouping. These results might be attributable to different databases, tissue specificity and distinct grouping. Therefore, it should be careful to employ CDC73 mRNA as a prognostic marker in clinicopathological practice.

In summary, up-regulated CDC73 mRNA expression in cancer and its positive correlation with aggressive behaviors and unfavorable prognosis might be due to a feedback reaction or its oncogenic function. The paradoxical results about the prognostic significances of CDC73 mRNA might also result from different databases, tissue specificity and distinct grouping.

The individual gene expression level of CDC73 was analyzed using Oncomine (www.oncomine.org), a cancer microarray database and web-based data mining platform for a new discovery from genome-wide expression analyses. We compared the differences in CDC73 mRNA level between normal tissue and cancer. All data were log-transformed, median centered per array, and standard deviation normalized to one per array. The expression (RNA-seqV2) and clinicopathological data of gastric (n=392), lung (n=865), breast (n=1093) and ovarian (n=304) cancer patients were downloaded from Cancer Genome Atlas (TCGA) database by TCGA-assembler in R software. We integrated the raw data and compared CDC73 expression with clinicopathological and prognostic data of the cancer patients. Additionally, the prognostic significance of CDC73 mRNA was also analyzed using Kaplan-Meier plotter (http://kmplot.com).

The data from TCGA database was dealt with SPSS 10.0 software using student t test. Kaplan-Meier survival plots were generated with survival curves compared by log-rank statistic. Two-sided p < 0.05 was considered as statistically significant. SPSS 10.0 software was employed to analyze all the data.