Diabetic nephropathy (DN) is a complicated diabetic disease that can develop into a progressive fibrosing kidney disease [1]. Despite improved prognosis in the last few years, DN has become a leading cause of end-stage renal disease (ESRD) and even mortality in the industrialized world, and its escalating incidence and prevalence in parallel with the pandemic of type 2 diabetes are great threats to life [2, 3]. Many studies suggest that DN patients are usually accompanied with some pathological signs, such as thicker glomerular basement membrane, renal hypertrophy, progressive glomerulosclerosis and mesangial expansion [4]. Although DN is historically regarded as a largely nonimmune disease, evidence from recent experimental and clinical studies indicates that chronic inflammation exerts a crucial role in DN pathogenesis and progression [5]. It is stated that DN has been related to multiple pathological factors such as glucose metabolic disorder, abnormal expression of cytokines, inflammatory factors and oxidative stress [6]. Although the treatment for DN is important to improve patients’ prognosis, further researches concerning the potential mechanism of intrarenal inflammation in aggravating DN are essential to be investigated, which may provide novel therapeutic targets for anti-infammatory strategies against DN.

Suppressor of cytokine signaling (SOCS) is implicated in the negative regulation of the signal transduction of cytokines through suppressing the Janus kinase (JAK)/signal transducers and activators of transcription (STAT) signaling pathway. It is well documented that SOCS1 and SOCS3 play a protective role in the development of DN by suppressing the JAK/STAT signaling pathway [7]. As another member of SOCS family, SOCS2 was initially characterized for its role in the periphery as a negative regulator of growth hormone (GH) signaling [8]. SOCS2 was reported to inhibit the activation of the JAK/STAT signaling pathway and reduce the expression of inflammatory cytokines and fibrosis associated proteins in DN [9]. However, its underlying mechanism remains unclear.

Toll-like receptors (TLRs) function as important receptors of the innate immune system through recognizing highly conserved microbial molecules known as pathogen associated molecular patterns (PAMPs) on microorganisms [10]. TLRs exert a fundamental role in the innate immune system via activating proinflammatory pathways in response to microbial pathogens [11]. TLRs activated by exogenous pathogens released by damaged or stressed tissues such as heat-shock proteins (HSPs) improve the activity of nuclear factor kappa B (NF-κB) and increase the release of pro-inflammatory cytokines and chemokines, thus activating downstream inflammation cascades and initiating the adaptive immune response [12, 13]. These up-regulated proinflammatory cytokines and chemokines, such as interleukin-6 (IL-6), tumor necrosis factor-α (TNF-α), monocyte chemotactic protein-1 (MCP-1), and IL-1β, are involved in the pathogenesis of DN [14]. Emerging evidence has indicated that TLR4 was the first identified molecular of TLRs and is positively involved in the development of kidney diseases and DN [15, 16]. TRL4 is up-regulated due to high glucose levels in intrinsic kidney cells which are known to be associated with the pathogenesis of DN [11, 17].

In the present study, we constructed streptozotocin (STZ)-induced DN rat models and high glucose-induced podocytes to investigate the function of SOCS2 in DN and its underlying mechanism.

SOCS2 was down-regulated, and TLR4 and NF-κB were up-regulated in renal tissues of DN patients and DN rats

Western blot was performed to examine the levels of SOCS2, TLR4 and NF-κB in the renal tissues of DN patients and DN rats. The western blot results showed that the level of SOCS2 was significantly lower and TLR4 was dramatically higher in renal tissues of DN patients (Figure 1A) and DN rats (Figure 1B) than that in control groups. In addition, p65 is one subunit of the NF-κB heterodimer and IκBα regulates the transcriptional activity of NF-κB through the formation of stable IκBα/NF-κB complexes [18]. It is well documented that NF-κB can be activated by the serine phosphorylation of p65 and tyrosine phosphorylation of IκBα [19]. Therefore, determination of NF-κB levels was carried out to detect the phosphorylation of p65 and IκBα. The results indicated that the levels of p-p65 and p-IκBα were markedly increased in the kindey tissue of DN patients (Figure 1A) and DN rats (Figure 1B) in comparison with respective control groups, while the levels of p65 and IκBα had no obvious change. These findings revealed that SOCS2, TLR4 and NF-κB may be involved in the development of DN. 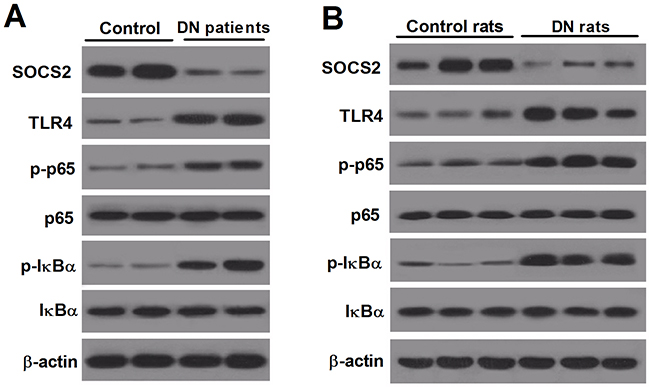 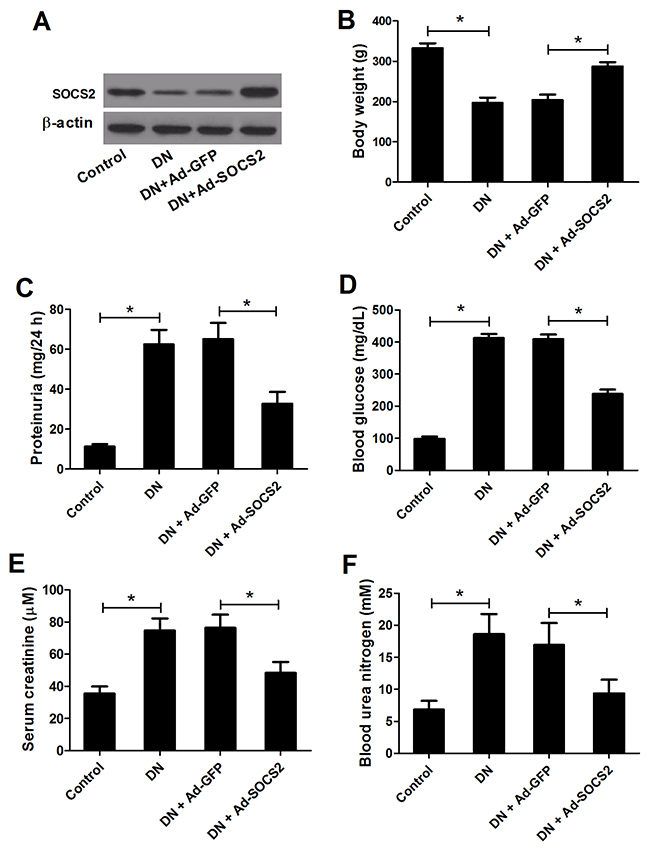 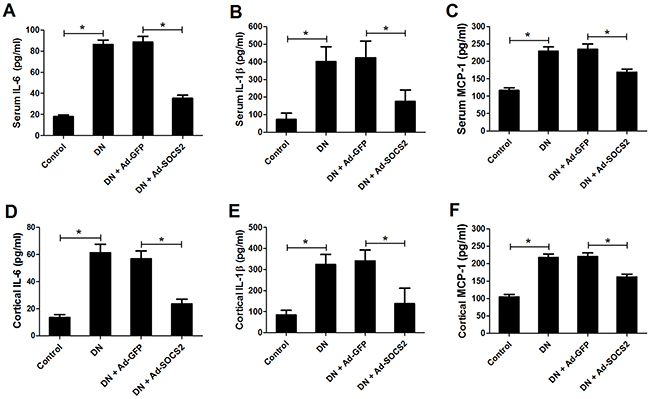 PAS staining was carried out to evaluate the renal injury, as shown in Figure 4. Extracellular matrix accumulation was increased in kidney tissues from DN rats compared with that in control rats, indicating a successful DN rat model. Moreover, DN rats infected with Ad-SOCS2 presented a decrease of renal injury as demonstrated by reduced extracellular matrix deposition with respect to that with Ad-GFP infection. These data indicated that SOCS2 upregulation alleviated STZ-induced renal injury in DN rats. 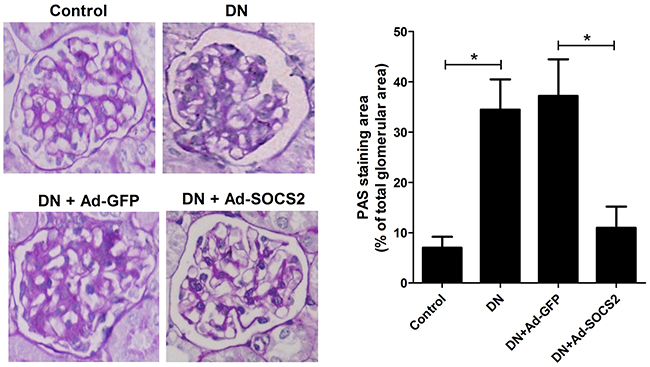 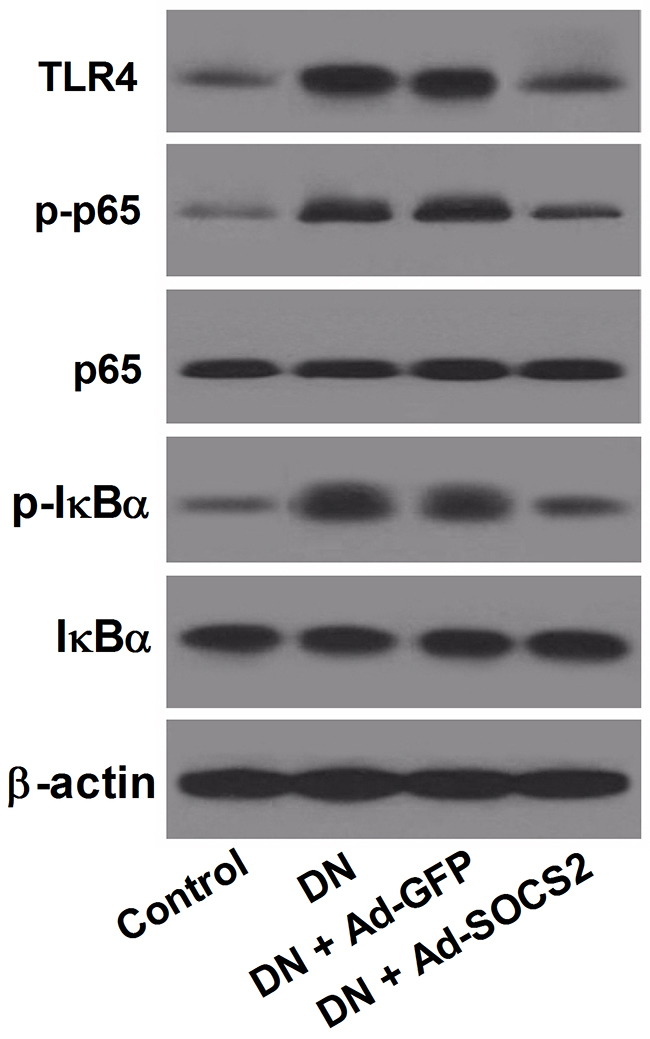 Figure 5: Effect of SOCS2 overexpression on the TLR4/NF-κB signaling pathway in DN rats. Western blot was carried out to evaluate the levels of TLR4, p-p65, p65, p-IκBα and IκBα in control rats, DN rats or DN rats infected with Ad-GFP or Ad-SOCS2.

It has been shown that HG treatment can induce podocyte apoptosis, leading to the onset of DN experimental type 1 and type 2 diabetic models [21]. Therefore, podocyte cells were stimulated with 30 mM D-glucose for 24 h to construct DN cell model. Then, we explored the effect of SOCS2 overexpression on HG-stimulated apoptosis in podocytes. The expression levels of SOCS2 were significantly increased in podocytes transfected with pcDNA-SOCS2 compared with those in podocytes transfected with pcDNA vector (Figure 6A). The flow cytometry analysis exhibited that HG treatment significantly promoted podocyte apoptosis, whereas SOCS2 overexpression dramatically inhibited this effect (Figure 6B). As expected, western blot results uncovered that anti-apoptotic protein Bcl-2 was down-regulated and Cleaved caspase-3 was up-regulated in HG-stimulated podocytes, whereas transfection of pcDNA-SOCS2 markedly overturned these effects (Figure 6C). Taken together, the results revealed that SOCS2 overexpression conspicuously suppressed the apoptosis in HG-induced podocyte. 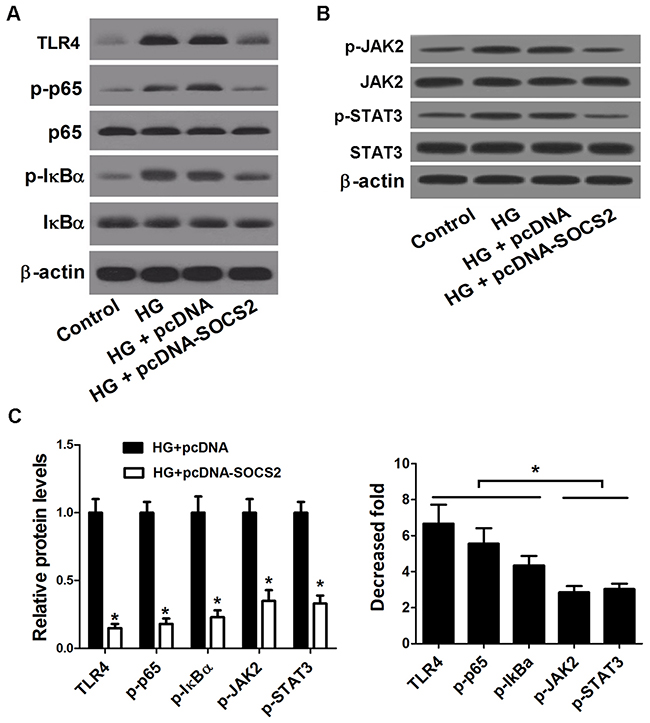 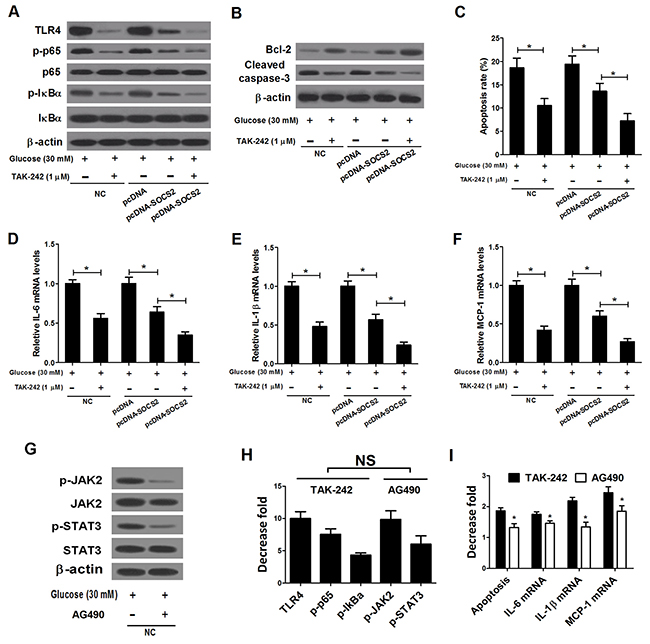 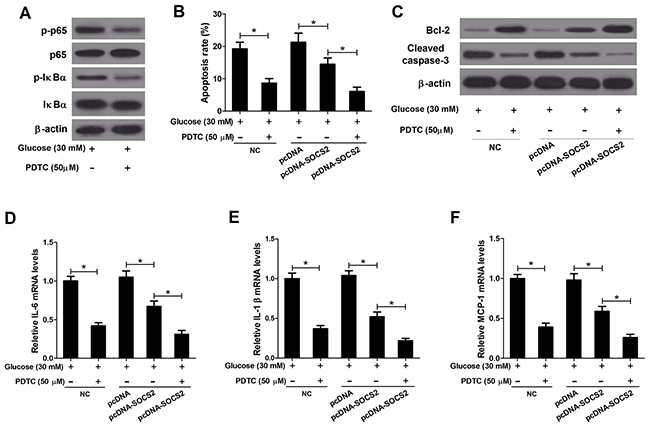 It has been implied that glucose metabolic disturbance, oxidative stress, inflammatory reaction and abnormal hemodynamics play a crucial role in the progression and development of DN [6, 22]. It is meaningful to better understand the pathogenesis of DN for developing effective therapeutic strategies against DN.

In conclusion, we demonstrated that SOCS2 adenovirus injection could relieve STZ-induced diabetic renal injury and decreased the generation of inflammatory cytokines in DN rats. SOCS2 overexpression attenuated the apoptosis and inhibited inflammatory cytokines secretions in HG-stimulated podocytes. We further illustrated that SOCS2 overexpression suppressed the apoptosis and inflammatory cytokines expression mainly by inhibiting the TLR4/NF-κB signaling pathway in HG-stimulated podocytes. This study suggested that inactivation of TLR4/NF-κB signaling pathway via SOCS2 may be an effective strategy for DN patients.

A total of 22 renal biopsies from advanced DN patients and 9 healthy renal biopsies were recruited from Huaihe Hospital of Henan University and were snap-frozen in liquid nitrogen. All DN patients were histopathologically diagnosed with diffuse or nodular diabetic glomerulosclerosis and no other renal pathology. Written informed consent was obtained from all of the participants before specimen collection and the study was approved by the Ethics Committee of Huaihe Hospital of Henan University which was in compliance with the Helsinki declaration.

Male Sprague-Dawley (SD) rats (8 weeks old, weighting 180-220 g) were purchased from Chinese Academy of Medical Sciences (Beijing, China). The rats were housed in a conventional environment with a regular light/dark cycle of 12 h, as well as a standard diet and tap water. All animal experiments were approved by the Animal Care Committee of Huaihe Hospital of Henan University (China). The rat models of DN were established by an administration of intraperitoneal injection of STZ at 60 mg/kg (dissolved in 0.01 M citrate buffer, pH 4.5; Sigma, St. Louis, MO, USA) followed by a high-glucose-fat diet (formula: 69% standard rat feed, 1% cholesterol, 0.5% sodium cholate, 15% lard and 10% carbohydrate). At 72 h after administration, their blood glucose levels were measured. If random blood glucose levels ≥ 16.7 mmoL/L, the diabetic model rats were considered to be successfully prepared. Rats treated with equivalent amounts of buffer injection were used as controls.

Total RNA from podocyte cells treated with HG alone or in combination with pcDNA-SOCS2 or pcDNA was extracted by Trizol reagent (Invitrogen). The quality and purity of extracted RNA were evaluated by a NanoDrop Spectrophotometer (Thermo Scientific, Hudson, NH, USA) at 260 nm and 280 nm. 2 μg of total RNA was reverse transcribed by High-Capacity cDNA Reverse Transcription Kit (Thermo Fisher Scientific, Waltham, MA, USA). Real-time PCR was carried out using FastStart SYBR Green Master mix (Roche Applied Science, Mannheim, Germany) according to the manufacturer’s instructions on a ViiA™ 7 Real-Time PCR System (Applied Biosystems, Foster City, CA, USA) with the following protocol: 10 min at 95°C, followed by 45 cycles of 95°C for 15 s, 60°C for 25 s and 72°C for 25 s. Relative gene expression were calculated by the 2−ΔΔCt method and normalized to the internal control GAPDH expression.

Rat renal biopsies samples and cultured podocyte cells were placed on ice to lyse in cell lysis buffer (Beyotime, Haimen, China) and centrifuged at 12000 rpm for 10 min at 4°C. The total protein in the cell supernatant of each sample was detected using the Bradford method (Pierce, Rockford, IL, USA). An equal amount of protein (25 μg) of each sample was separated by 10% sodium dodecyl sulfate-polyacrylamide gel electrophoresis (SDS-PAGE) and transferred to polyvinylidene fluoride membranes (PVDF; Bio-Rad, Hercules, CA, USA). After blocking with 2.5% skim milk for 1 h at 37°C, the members were then incubated with primary antibodies against SOCS2, TLR4, p-p65, p65, p-IκBα, IκBα, Bcl-2, Cleased caspase-3 and β-actin (1:1000; Abcam, Cambridge, MA, USA) at 4°C overnight. The members were then incubated with HRP-conjugated anti-rabbit antibody (1:1000; Santa Cruz, Waltham, MA, USA) for 2 h at room temperature and visualized by using the enhanced chemiluminescence (ECL) system (Pierce).

The body weight of each diabetic model rats was measured 4 weeks after administration of Ad-GFP or Ad-SOCS2 infection. The collected urine specimens from all rats were centrifuged at 3000 rpm for 10 minutes at 4°C. The supernatant was measured for proteinuria concentration by ELISA. The right jugular artery was catheterized and the blood samples collected from all rats was centrifuged at 3000 rpm for 10 minutes at 4°C. The concentrations of blood glucose were examined by a diagnostic kit (Applied Biosystems). The concentration of serum creatinine was analyzed by an automatic biochemistry analyzer (Hitachi Model 7600, Shibuya, Tokyo, Japan). The concentration of blood urea nitrogen was finally tested by a kinetic reagent (Diagnostic Chemicals Limited, Oxford, Connecticut, USA).

Suxia Yang and Junwei Zhang designed and performed the experiment. Suxia Yang, Shiying Wang and Xinxin Zhao analyzed the data and wrote the manuscript. Jun Shi supervised the study and reviewed the manuscript.