Lung cancer is the leading cause of cancer related death worldwide [1] and adenocarcinoma (AC) is the most common histological type [2]. The TNM staging system is often used to determine how far the cancer has spread based on the size of the primary tumor, lymph nodes spread and metastasis [3]. Although survival of pathologic stage IA patients is expected to be much better than those at other stages, 5-year survival of these patients varies from 77% to 94.4% [4]. Stage IA patients often have very different outcomes even if undergoing the same treatment. We and others have previously reported that the new International Association for the Study of Lung Cancer/American Thoracic Society/European Respiratory Society (IASLC/ATS/ERS) lung AC classification [5] is significantly associated with patient survival, confirming the prognostic value of the new classification system [4, 6, 7]. With the recent advances of genome-wide sequencing and gene expression profiling, we have gained a deeper understanding of cancers on a molecular level. Multiple studies involving gene expression profiling of lung cancers suggest that gene expression signatures in addition to the IASLC/ATS/ERS system can be used to improve the prediction of patient survival [8–11]. In this study, we focus on identifying molecular prognostic markers that can predict the survival of stage IA lung adenocarcinoma patients, with the intention of finding reliable prognostic markers for better management and treatment of stage IA lung adenocarcinoma.

To identify molecular prognostic markers for stage IA lung AC, we decided to analyze the gene expression profiles of lung AC from different clinicopathological subgroups. Using tissue micro-dissection, we were able to capture at least 500 tumor cells from each patient specimen. 4 acinar subtype lung AC, which has a better prognosis, and 4 solid subtype lung AC, which has a worse prognosis, were selected for comparison of gene expression profiles using Affymetrix PrimView microarrays. Representative images of solid and acinar subtype lung AC are presented in Figure 1. Clinical information of the patients enrolled in this study such as age, clinicopathological subtype, disease-free survival (DFS) and overall survival (OS) can be found in Table 1 and Supplementary Table 1. Using a cutoff value of fold change > 2 and a p-value < 0.05, 521 genes were upregulated and 534 genes were downregulated in acinar subtype lung AC compared to solid subtype (Figure 2A). The heatmap of differentially expressed genes shows a clear distinction between acinar and solid subtype lung AC (Figure 2B). 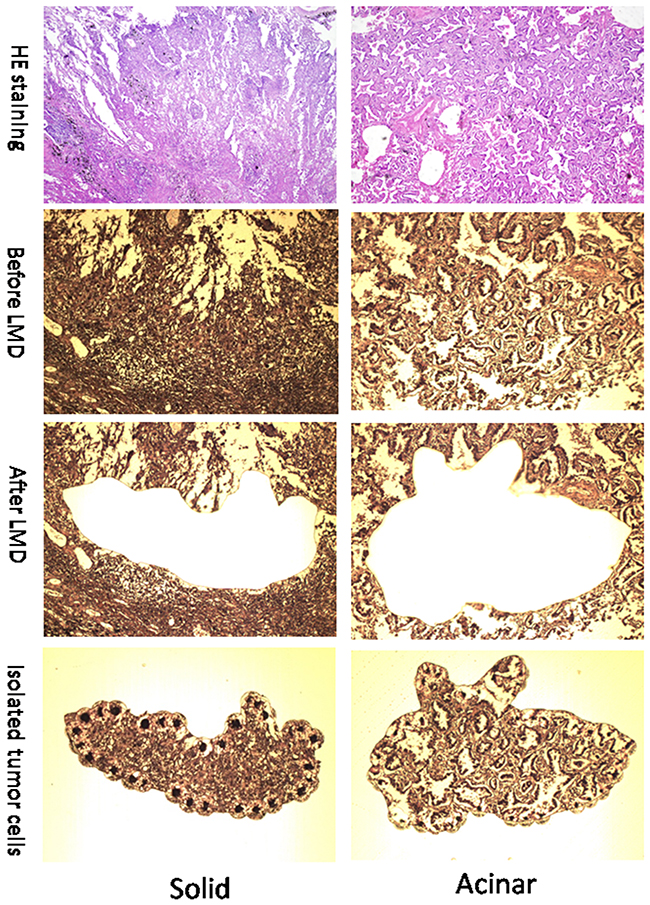 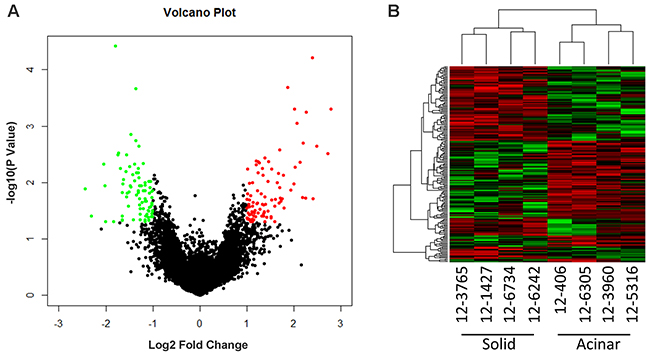 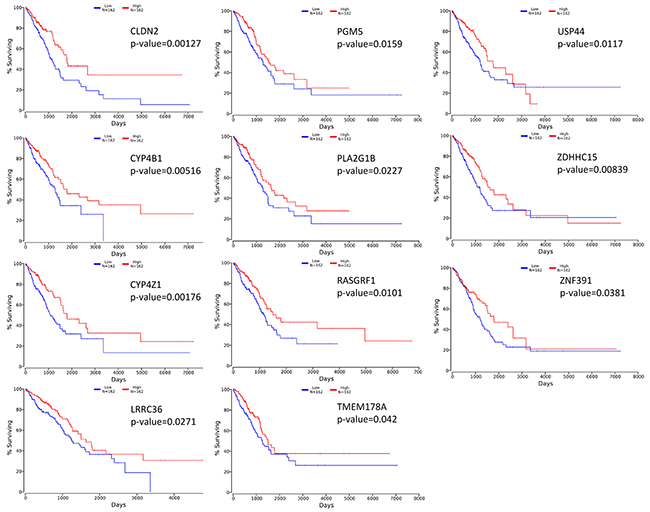 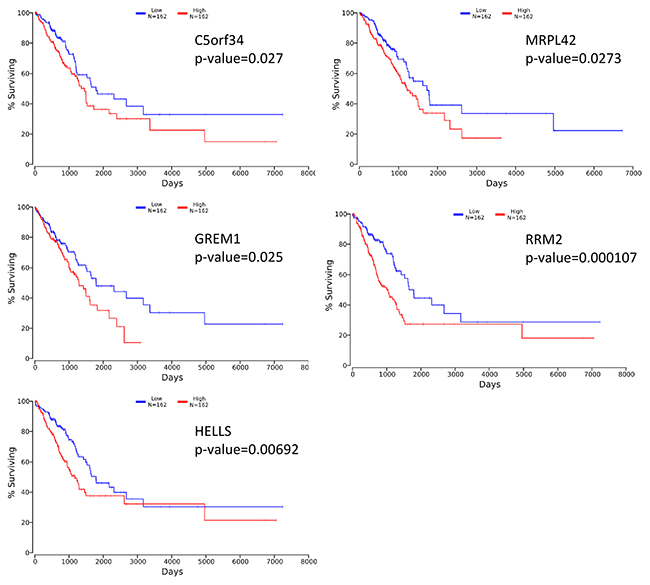 Together, our data suggest that acinar and solid subtypes of lung AC have distinct gene expression signatures. The poor prognosis of solid subtype lung AC is potentially due to dysregulated RNA polymerase I activity and inactivation of the p53 pathway. Candidate prognostic marker genes from our study may be valuable for prediction of patient survival and guidance for disease management and treatment.

The identified genes that predict survival of stage IA lung AC patients may reveal important information for developing subtype specific therapies. CLDN2 encodes for Claudin-2, which belongs to major integral membrane proteins localized in tight junctions. CLDN2 was previously shown to be a good prognostic factor in non-small cell lung cancer [28]. PGM5 is a phosphoglucomutase involved in interconversion of glucose-1-phosphate and glucose-6-phosphage [29]. PGM5 has been found to be down-regulated in colorectal cancers [30]. USP44 is a deubiquitinase that functions as a key regulator of mitotic spindle checkpoint and loss of Usp44 in mice resulted in spontaneous tumor development, especially in lung [31]. USP44 is also frequently downregulated in human lung cancers and its decreased expression is associated with a poor prognosis [31]. CYP4B1 and CYP4Z1 are members of the cytochrome P450 monooxygenase involved in drug metabolism. It has been reported that the expression of CYP4B1 is reduced in neoplastic lung tissues compared with normal lung [32]. Mutations of the CYP4Z1 gene have been associated with progression of NSCLC [33]. GREM1 is a bone morphogenic protein (BMP) antagonist. It is overexpressed in lung AC and forced expression increases proliferation in normal lung cells [34]. RRM2 is ribonucleotide reductase regulatory subunit M2, which catalyzes the formation of deoxyribonucleotides from ribonucleotides. Multiple studies have suggested that high expression of RRM2 correlates with poor prognosis in NSCLC patients [35, 36].

In conclusion, our gene expression analysis on different subtypes of stage IA lung AC have revealed valuable prognostic factors that may help improve the prediction of patient survival. Furthermore, it may provide important implications for identifying targeted therapies in a subtype specific manner. Due to the relatively small sample size in this study, follow-up studies with a larger cohort of patient specimens will strengthen our discovery and hopefully help further improve the clinical outcomes of patients.

We used data from the records of 8 patients with pathological stage IA AC, who had undergone a lobectomy and mediastinal lymph node dissection at Shanghai Chest Hospital, Shanghai, China in 2012. Written consent was obtained from all participants and our ethics committee approved this study. None of the subjects had received radiation therapy or chemotherapy prior to surgery. Smoking history was obtained from the patients via interview. Regular follow-up evaluations after surgery for all patients included physical examination, blood examination, computed tomography scan of the chest and abdomen, brain magnetic resonance imaging, and bone scanning. Postoperative follow-up involved examination every 3 months for 2 years, every 6 months for years 3-5, and every 12 months from year 5. The median follow-up time for the entire group was 70 months (range, 10-150 months). All cases were confirmed by retrospective pathological analysis of paraffin-embedded sections.

GSEA is a computational methodology to identify classes of genes that are overexpressed in a large set of genes between two biological states, such as disease phenotypes [13, 14]. This analysis was done using GenePattern (https://genepattern.broadinstitute.org/). The Molecular Signatures Database (MSigDB) C2 collection, consisting of canonical pathways and experimental signatures curated from publications, was used for the analysis.

OncoLnc (www.oncolnc.org) is a web-based database for exploring correlations between gene expression and cancer patient survival. It contains survival data for 8,647 patients from 21 cancer studies performed by The Cancer Genome Atlas (TCGA), along with RNA-SEQ expression for mRNAs and miRNAs from TCGA [19]. OncoLnc was used to link TCGA survival data to microarray gene expression data [19]. A 33% upper percentile and 33% lower percentile of expression was used to generate a Kaplan-Meier survival curve for individual genes of interest.

For microarray analysis, the significance of differential gene expression is determined by a cut-off of p-value < 0.05 and fold change > 2. Statistics used in GSEA analysis was previously described [13]. Significance of enriched gene sets is determined by a cut-off of FDR < 0.25 and nominal p-value < 0.01. For OncoLnc, multivariate Cox regressions were used to conduct survival analysis [19] and a p-value < 0.05 is considered significant.

No potential conflicts of interests exist.

This work was supported by the Major and Key Foundation of Shanghai Chest Hospital (grant no. 2014YZDC10200).