Gastric cancer, one of the most common malignant tumors in the world, is the third most common cause of cancer mortality worldwide. Patients with gastric cancer are often diagnosed in advanced stages and therefore associated with poor prognosis [1].

The mainstream treatment for the patients with gastric cancer at advanced stage or relapse after surgery is chemotherapy [2].

Taxol is a natural product with potent anti-tumor effect that widely used in gastric cancer therapy. Taxol against gastric cancer mainly through promoting the polymerization of tubulin, and thereby disrupting the normal microtubule dynamics required for cell division and interphase processes. Although the anti-tumor effects of Taxol are commonly exhibited through its induction of mitotic catastrophe, there is compelling evidence suggesting that Taxol acts through different apoptotic mechanisms, such as down-regulates Bcl-2 and Bcl-xL expression, and causes cell cycle arrest at the G2/M phase [3, 4]. Nevertheless, the response to Taxol therapy is limited by acquired resistance.

Over the past years, some mechanisms of acquired resistance to Taxol have been elucidated. Mutations of tubulin were reported to be a strong determinant of Taxol resistance in non-small cell lung cancer [5, 6]. Alterations in tubulin expression and polymerization dynamics are considered to be related to resistance to Taxol [7]. In addition, membrane phosphoglycoproteins that function as drug-efflux pumps were shown to have an important role in the development of resistance to Taxol [8]. Recently, emerging evidence suggests that several pathways, such as the mitochondrial pathway and the EGFR pathway were involved in Taxol resistance. Critical genes in regulation of these pathways have been discovered, e.g., Bcl-2, Bcl-xl and p53. Regulation of these apoptosis-related genes also been involved in the regulation of Taxol acquired resistance [9–13]. Given the diversity and complexity of these identified mechanisms associated with Taxol acquired resistance, fully defining the underlying mechanisms of resistance is still a priority to develop rational strategies to improve the therapeutic efficacy of human gastric cancer cells to Taxol.

The development of acquired resistance greatly dropped the efficacy of Taxol in human cancer treatment. To investigate the molecular mechanism(s) responsible for the acquired resistance of gastric cancers to Taxol, we generated a Taxol-resistant cell line by chronic exposure of gastric cancer cell line MGC-803 to 50 nM Taxol for four weeks. This Taxol-resistant cell line was referred to as MGC-803R hereafter. The resistance of MGC-803R was become stable after approximately 6 months of continuous selection and was confirmed by MTT and long-term colony formation assays (Figure 1A and 1B). In order to identify novel gene candidates involving in the resistance to Taxol, we compared the expression level of a panel of genes in MGC-803 and MGC-803R by western blot analysis and real-time RT-PCR analysis (data not shown). Through this analysis, we found the anti-apoptotic protein Mcl-1 was noticeably upregulated in MGC-803R than MGC-803 (Figure 1C), whereas Bcl-2 and Bcl-xl, the other anti-apoptotic members of the Bcl-2 family, showed little, if any, responses to Taxol acquired resistance (Supplementary Figure 2). 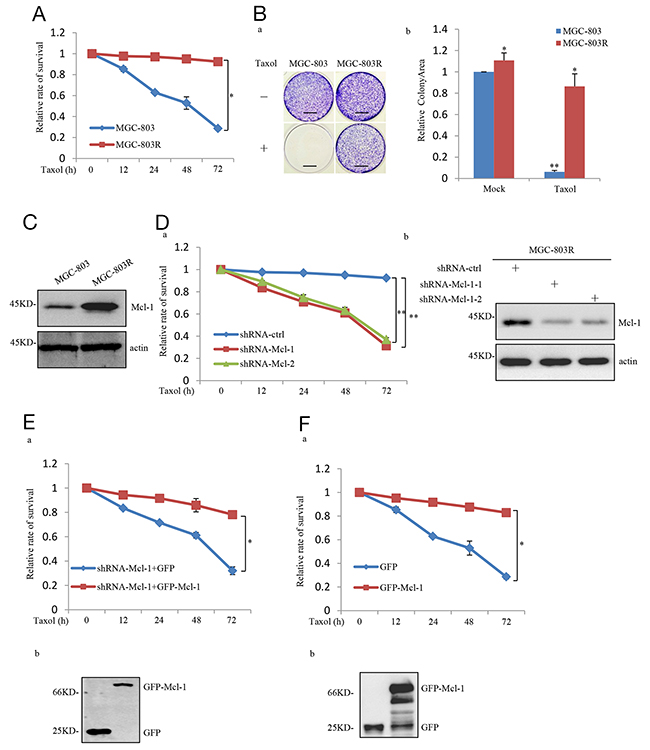 To further confirm the effect of Mcl-1 upregulation in acquired Taxol resistance in vivo, we performed a xenograft mouse model. MGC-803R cells with and without stable knockdown of Mcl-1 were individually injected subcutaneously into the right flank of nude mice, and mice were treated with Taxol (20mg/kg) through intraperitoneal injection. As shown in Supplementary Figure 4A, MGC-803R xenografts were largely abolished by Mcl-1 knockdown. This was also confirmed by a significant decrease in xenograft weights (Supplementary Figure 4B). Taken together, these results strongly suggest the critical role of Mcl-1 in the acquired resistance to Taxol in human gastric cancer cells.

Mcl-1 stabilization is regulated by the PI3K/Akt pathway 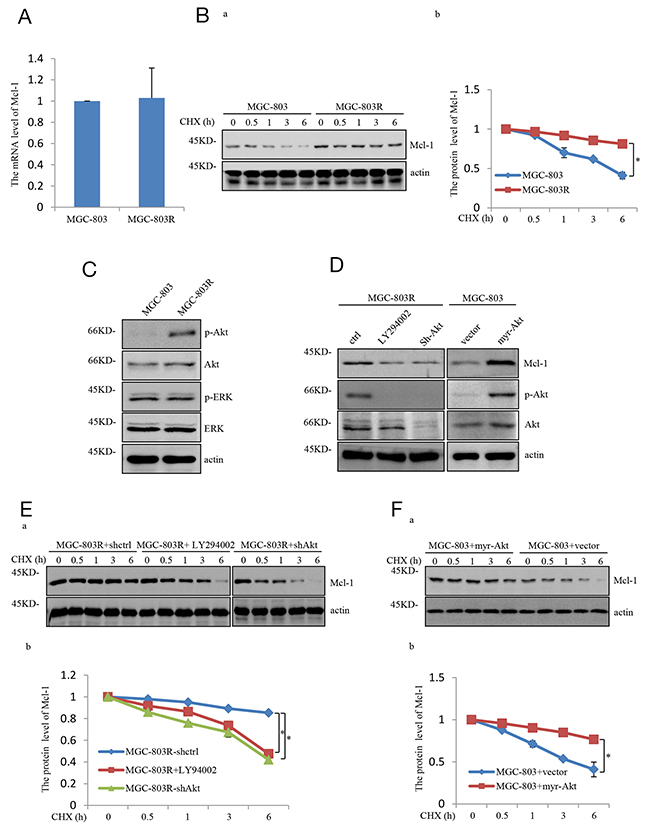 To further determine the role of the PI3K/Akt pathway in mediating Mcl-1 upregulation, MGC-803R cells were treated with LY294002, a specific inhibitor of PI3K, or shAkt respectively, which inhibits the PI3K/Akt pathway. As shown in Figure 2D and Supplementary Figure 1, LY294002 or shAkt treatment led to a dramatic decrease in Mcl-1 protein level. More importantly, ectopic expression of the constitutively active form of AKT (Myr-AKT) in MGC-803 cells led to a strong increase in Mcl-1. We also found that the LY294002 or shAkt treatment reduced the Mcl-1 stability in MGC-803R cells and Mcl-1 half-life was increased in MGC-803 cells with Myr-Akt ectopic expression (Figure 2E and 2F). Together, these data demonstrate that Mcl-1 is stabilized by the PI3K/Akt pathway, through which Mcl-1 contributes to the acquired resistance of human gastric cancer cells to Taxol. 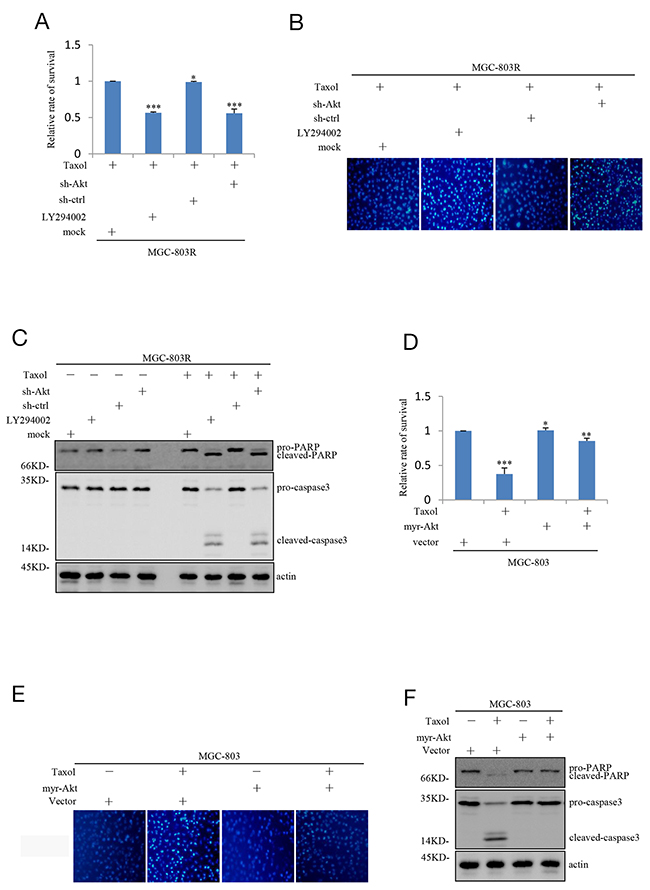 We also evaluated the effect of PI3K/Akt pathway on Taxol-induced inhibition on cell viability in MGC-803 cells. As shown in Figure 3D, the inhibitory effect of Taxol on cell viability was greatly reversed by ectopic expression of Myr-Akt in MGC-803 cells. Correlated with this, Myr-Akt overexpression resulted in a great decrease in aberrant nuclei stained by Hoechst 33342 (Figure 3E) and a great decrease in Taxol-induced caspase-3 activation and PARP cleavage (Figure 3F). Take together, these results point out that inhibition of PI3K/Akt pathway can render Taxol-resistant gastric cells sensitive to Taxol-induced apoptosis. 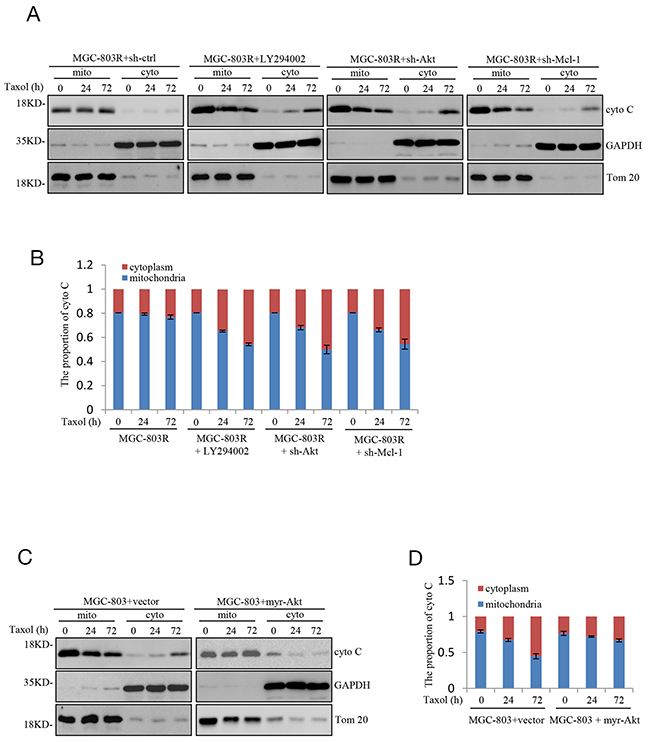 Chemotherapy for tumor kills target cells primarily by inducing apoptosis. Taxol was obtained from the extract of plant and exhibits potent pro-apoptotic ability in various human malignancies, including gastric cancer. Multiple studies have proved that patients with gastric cancer respond initially to Taxol treatment. Nevertheless, the therapeutic effect of Taxol in treating gastric cancer was limited by the acquired resistance in the majority of patients [17, 18].

Therefore, exploration of the detailed molecular mechanisms of Taxol acquired resistance remains warranted. This would facilitate the development of new therapies and identify novel biomarkers for predicting resistance. In this study, we have provided evidence that increased level of Mcl-1 responses to PI3K/AKT hyper-activation contributes to the development of Taxol acquired resistance.

Mcl-1 is a Bcl-2 family protein and was originally identified as an early induction gene from human myeloid leukemia cell line ML-1 [19]. Subsequent functional studies have shown that Mcl-1 acts as an anti-apoptotic protein and is capable of inhibiting apoptosis induced by various apoptotic stimuli, including etopside, UV irradiation, etc. [20]. Anti-apoptotic protein Mcl-1 protects mitochondrial integrity, thus blocking the release of apoptogenic proteins such as cytochrome C, Smac/DIABLO, and AIF from the mitochondria [16, 21, 22]. More importantly, knockdown of Mcl-1 showed that the anti-apoptotic function of Mcl-1 is essential for maintenance of cell viability [23, 24]. And up-regulation of Mcl-1 is critical for survival of human melanoma cells upon endoplasmic reticulum stress [25]. Although enormous evidences suggest that Mcl-1 be involved in various cellular events, very little is known about the critical function of Mcl-1 in Taxol acquired resistance. Our study therefore uncovers a novel and unexpected function of Mcl-1 in association with Taxol resistance.

In this study, we also provide the detailed mechanism by which Mcl-1 confers acquired resistance to Taxol. Mcl-1 is a short-lived protein with a quick turnover rate due to it contains a PEST (proline, glutamic acid, serine, and threonine) sequence in its Nterminal region [26]. So the post-translational modification is important to maintain cellular protein level of Mcl-1. Mcl-1 is shown to be stabilized responses to PI3K/Akt pathway hyper-activation, thereby confers resistance to Taxol in human gastric cancer cells.

Akt, also referred to as PKB, is activated by various growth and survival factors to function in a pathway involving PI3 kinase [27, 28]. Activated Akt modulates the function of numerous targets involved in the regulation of cell survival and cellular growth. In recent years, it has been shown that the PI3K/Akt pathway is frequently altered in human cancers. Hyper-activated PI3K/Akt pathway mediated the survival of tumor cells and it may decisively contribute to the resistant phenotype [29]. But how PI3K/Akt pathway regulates the Taxol acquired resistance is not fully understood.

As mentioned earlier, several mechanisms of Taxol-resistance have been proposed. In this study, we also validated the effect on knockdown of Taxol-resistance associated genes that have been proposed before, such as TNFAIP1 [30], GBP1 [31] and LIN28 [32]. As shown in Supplementary Figure 3, knockdown of these genes did not significantly alter sensitivity of MGC-803R cells to Taxol-induced apoptosis. These data indicate that upregulation of Mcl-1 represents a unique mechanism of acquired resistance to Taxol.

Taken together, we present an anti-apoptosis mechanism downstream of PI3K/Akt and demonstrate that stabilization of Mcl-1 is a vital consequence of hyper-activation of the PI3K/Akt pathway. Further, we find that the enhanced Mcl-1 prevents of the permeabilization of the outer mitochondrial membrane, and identifies Mcl-1 as a potential therapeutic target for the treatment of Taxol-resistant human gastric cancer. Inhibition of Mcl-1 or PI3K/Akt pathway significantly reversed the resistant phenotype of Taxol-resistant human gastric cancer cells.

Cytosolic and mitochondrial subcellular fractionation was carried out as described previously [33]. Briefly, cells were homogenized in homogenization buffer (20 mM HEPES-KOH, pH 7.5, 1.5 mM MgCl2, 10 mM KCl, 1 mM sodium EGTA,1 mM sodium EDTA, 1 mM dithiothreitol, 250 mM sucrose and protease inhibitor cocktail). The homogenates were subjected to centrifugation at 600g for 5 min at 4°C. The supernatant fraction was collected and centrifuged again at 7000g for 10 min at 4°C to obtain cytoplasmic and mitochondrial fractions. The mitochondrial pellet was washed and solubilized in TNC buffer (10 mM Tris acetate, pH 8.0, 5 mM CaCl2, 0.5% NP-40 and cocktail). The protein concentration was determined with a BCA kit before western bot analysis.

Total RNA was isolated using Trizol reagent (Invitrogen). The assay was performed as previously described [35]. The following primers were used in this study for Mcl-1: F: 5’-GCCAAGGACACAAAGCCAAT-3’, R: 5’-AACTCCACAAACCCATCCCA-3’

MGC803 and MGC803R cells were plated at a density of 3000 cells per well on a six-well plate and were incubated with and without 50 nM Taxol for 3 weeks. Then cells were washed with PBS and fixed with 70% cold methanol for 15 min, followed by staining with 0.005% (m/v) crystal violet for 30 min at room temperature. After gentle wash, the colonies were photographed.

Cells were seeded in 96-well plates and treated with and without Taxol for the indicated times. 20ul of 5 mg/ml MTT solution was added to each well followed by incubation at 37°C for 4 h. Then cells were incubated with DMSO for additional 10 min at 37°C. The absorbance at 570nm was detected by a microplate reader.

MGC803 and MGC803R cells were plated at a density of 15000 cells per well on a 24-well plate, followed with the indicated treatments. The viability of cells was evaluated by counting apoptotic cells characteristic of aberrant nuclei staining by Hoechst 33342.