Spinal cord plays a central role in the development and progression of pathogenesis of obstinate pruritus. In the current study, four groups of adult male C57Bl/6 mice were investigated; one group treated with saline, while the other groups intradermally injected with compound 48/80, histamine, α-Me-5-HT and capsaicin (algogenic substance), respectively. The intradermal microinjection of pruritic and algogenic compound resulted in a dramatic increase in the itch/algogenic behavior. Analysis of the microarray data showed that 15 genes in spinal cord (C5-C8) were differentially expressed between control group and 48/80 group, in which 9 genes were up-regulated and 6 genes were down-regulated. Furthermore, the results of RT-qPCR validation studies in C5-C8 spinal cord revealed that the 9 mRNA (Sgk1, Bag4, Fos, Ehd2, Edn3, Wdfy, Corin, 4921511E18Rik and 4930423020Rik) showed very different patterns for these different drugs, especially when comparing α-Me-5-HT and capsaicin. In three itch models, Fos and Ehd2 were up-regulated whereas Corin, 4921511E18Rik and 4930423020Rik were down-regulated. Furthermore, Corin and 4930423020Rik were down-regulated in itch model group compared to capsaicin group. Thus the application of microarray technique, coupled with RT-qPCR validation, further explain the mechanism behind itching evoked by pruritic compounds. It can contribute to our understanding of pharmacological methods for prevention or treatment of obstinate pruritus.

The majority of humans have experienced mild to moderate pruritus. Mosquito biting evoked-acute itching is one of the most common types of moderate pruritus. Some patients with serious skin diseases such as atopic dermatitis, advanced liver diseases or renal diseases, will experience moderate to severe itching. Obstinate pruritus is a pathological condition that affects skin sensory processing [1–4]. The mechanisms responsible for intractable pruritus are poorly understood, but refractory itching seems to be enhanced by a state of spinal hypersensitivity. It was reported that the spinothalamic tract implicated the spinal cord as a critical site for scratch-evoked suppression of itch [5–8]. Study of Sun et al has indicated that the gastrin-releasing peptide receptor (GRPR) in the dorsal horn of the spinal cord represent the first molecule that is dedicated to mediating the itch sensation [9]. It is well-known that GRPR-positive neurons in the spinal cord constitute a long-sought labeled line for itch not pain sensation [10]. In our previous research, the results of proton nuclear magnetic resonance (1H-NMR) studies of the spinal cord extracts revealed that the metabolites showed very different patterns for pruritogen and algogenic substance [11]. Given the high prevalence of itch in some patients with skin diseases [12–14], it is pivotal to know whether the genes are dysregulated in the spinal cord in different itch models.

Previous studies from pain data indicate that identification of whole genome messenger RNA (mRNA) expression profiles provide insight into the widespread factors that contribute to the development of more effective treatments for intractable pain [15–17]. Analysis using expression microarrays has revealed that many genes are regulated following noxious stimuli such as pruritus. In the present study, whole genome mRNA expression profiles in spinal cords of mice with compound 48/80 evoked-itching were analyzed to identify as unique target genes. Further, these candidate genes were examined in different itch models so as to provide central therapeutic targets for antipruritic drug development.

To identify altered genes that might contribute to spinal hypersensitivity of acute itch, we conducted itch mRNA profiling experiment on mouse acute itching models by compound 48/80. The mRNA expressions of lower cervical spinal cord (C5-C8) of the animals were examined using Affymetrix Mouse Genome 430 2.0 microarrays that include 10,000 probe sets. The gene expression profiles in the 48/80 group were compared with the corresponding data of control group. We identified that a total of 15 probe sets were differentially expressed between control group and 48/80 group by the microarray data analysis, in which 9 probe sets were up-regulated and 6 probe sets were down-regulated (Figure 2). The maximal and minimal fold change was 5.16 and 2.01, respectively. 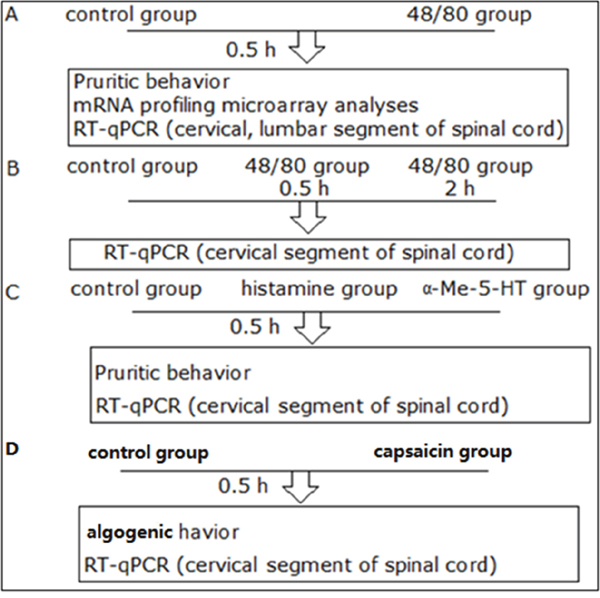 Figure 1: An illustration of the experimental design. 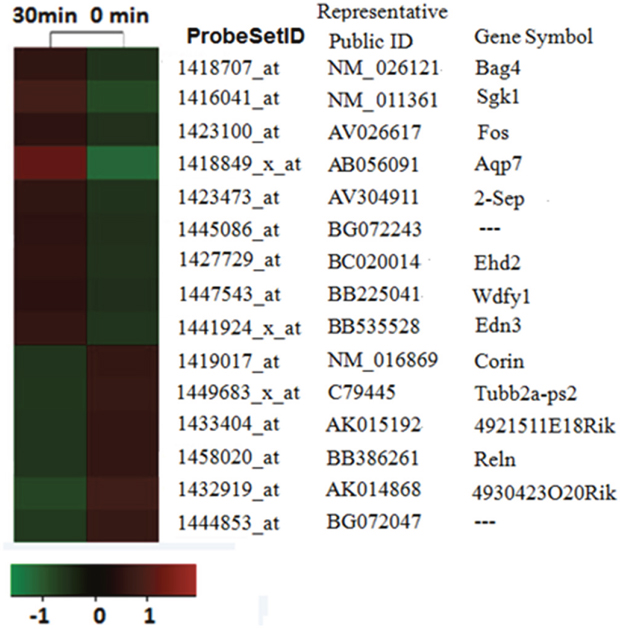 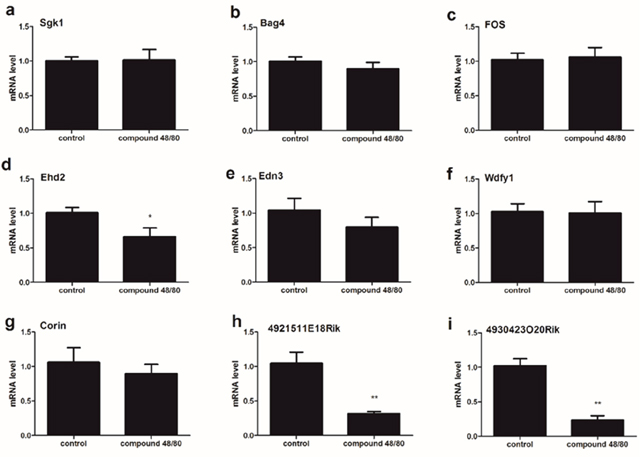 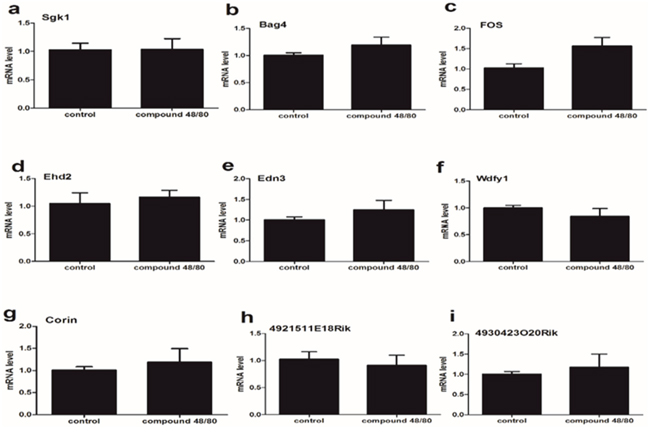 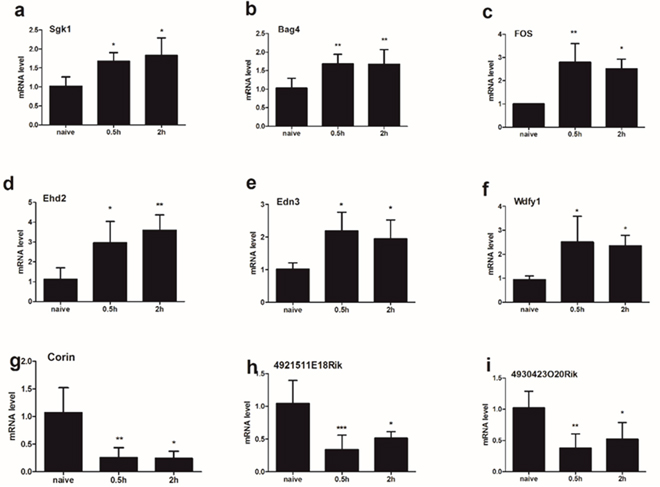 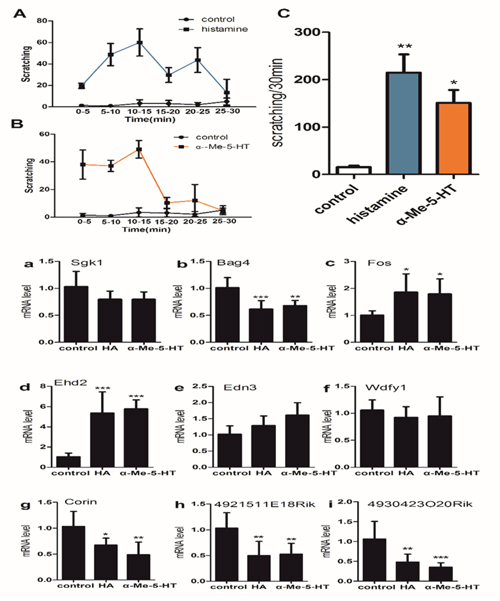 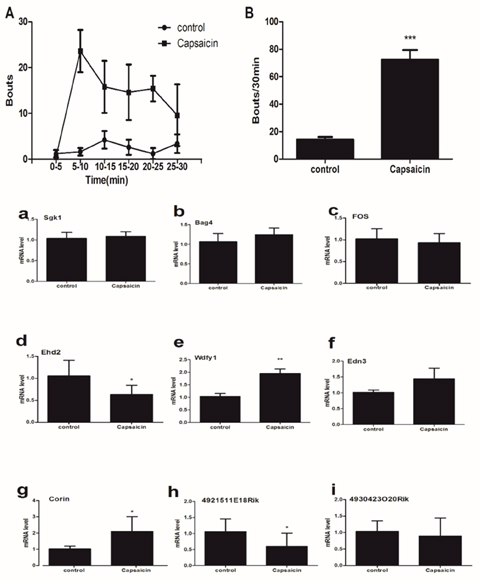 Here, we identified that compound 48/80, histamine and α-Me-5-HT produced profound scratching behaviors, and these results were consistent with previous reports describing marked effects in mice responding to intradermal injection of a variety of pruritogens [18–26].

It is well-known that regulations of gene expression are varied in time course [27–30], and some gene could be regulated rapidly such as Fos, whereas some might be slow. 0.5h vs 2h after compound 48/80 injection, C5-C8 spinal tissue samples were collected forRT-qPCR validation. Our results indicated that there was no difference between 0.5h group and 2h group, and the expressions of 6 mRNA (Sgk1, Bag4, Fos, Ehd2, Edn3, Wdfy1 and Reln) were significantly up-regulated underlying 0.5h group and 2h group, whereas the expression of 3 mRNA (Corin, 4921511E18Rik and 4930423O20Rik) was significantly down-regulated. Further, some reports previously described that the change of scratching bout took place in the 0-0.5h observation period after pruritogen injection [6, 31]. Thus, in the present acute itching study, the spinal cord tissue samples of animals were detected 0.5 hour after the injection.

The spinal cord is a key hub for pruriceptive sensation and its signaling to the central nervous system (CNS) [32]. Pruritogen-triggered hyperexcitability in spinal cord is considered a major source of obstinate itching [33, 34]. The cellular hyperexcitability, in turn, is thought to be implicated in transcriptional switching in special cell body [16]. It is believed that analysis of microarray data of spinal cord may determine every mRNA transcript in a particular sample [35–39]. We selected 12 genes for RT-qPCR validation, and found that 75 % of the expression changes that were initially identified by the microarray data analysis were confirmed by RT-qPCR. These data revealed that the results from these microarray results had a high discovery rate. On comparing three itch models, we found that the various pruritogens yielded consistent results, and in three itch models, Fos and Ehd2 were up-regulated whereas Corin, 4921511E18Rik and 4930423020Rik were down-regulated. Furthermore, Corin and 4930423020Rik were down-regulated in itch model group compared to capsaicin group. A further study is needed in fact to address special function of these mRNA during acute itching.

In conclusion, the present results reveal that the application of microarray technique, coupled with RT-qPCR validation, further explain the mechanism behind itching evoked by pruritic compounds. Our data provides a powerful a useful baseline to begin functional experimentation involved in acute itching. It can thus contribute to our understanding of pharmacological methods for prevention or treatment of pruritus.

Male C57BL/6J mice (8-10 weeks old) were provided by the Experimental Animal Research Center of Hubei Province (license number: 42000600018764). The animals were maintained in a climate controlled room on a 12-hlight/dark cycle (light on at 07:00 h). Mice were housed (5/cage), but they were individually caged during each experiment. Food and water were available ad libitum. Experimental protocols were approved by the Institutional Animal Care and Use Committee of Tongji Hospital (No.TJ-A20150803). All testing and surgeries were performed in accordance with the policies and recommendations of the National Guides for the Care and Use of Laboratory Animals.

The protocols of each experiment were presented in the parts of figure legends. All procedures and behavioral assay were conducted in an isolated quiet room to reduce variance. An illustration of the experimental design above is displayed in Figure 1.

To induce acute itching on the skin, we followed a previously reported procedure [6, 31, 40–42]. Animals were received an intradermal microinjection of 100 μl saline, compound 48/80 (50μg/50μl), histamine (800μg/50μl), α-Me-5-HT group (35μg/50μl) or capsaicin (40μg/50μl) in the nape of the neck (via a 0.3 ml insulin syringe), respectively. Compound 48/80, histamine, α-Me-5-HT and capsaicin were purchased from Sigma-Aldrich (St. Louis, MO, USA). All drugs were dissolved in saline. All pruritic behaviors were evaluated as previously described with minor modifications [6, 43, 44]. The tests of algogenic behavior by capsaicin were performed similar with previous researches [11, 43].

2 μg of total RNA was extracted from mouse spinal cords (C1-C4, C5-C8 or lumbar segment) using TRIzol reagent (Invitrogen, USA) according to the manufacturer’s protocol and quantified using a spectrophotometer (BioPhotometer, Eppendorf, Hamburg, Germany)[27, 46–49]. The threshold cycle (CT) was used to estimate the amount of target mRNA. The comparative CT method with the formula for relative fold-change = 2-ΔΔCTwas used to quantify the amplified transcripts. The specific forward (F) and reverse (R) primer sequences (Table 1) were designed [1]. Experiments were evaluated in triplicate.

Behavioral tests were performed by observers blinded to the treatments of the animals used. All quantification data are presented as mean ± SEM, and error bars represent SEM. Statistical comparisons were performed with Mann-Whitney test. The statistical analyses were done using t test, and P < 0.05 was considered statistically significant.