The prognostic effect of LINC00152 for cancer: a meta-analysis

Long noncoding RNAs (lncRNAs) are defined as RNA transcripts of more than 200 nucleotides in length [1]. Many studies have suggested that lncRNAs were played an important role in tumorigenesis, proliferation, and metastasis in cancer development [2, 3]. For example, Jiang et al. showed that lnc-epidermal growth factor receptor (EGFR) linked an immunosuppressive state to cancer by promoting Treg cell differentiation [4]. Koirala et al. demonstrates lncRNA AK023948 and DHX9 as important players in the AKT pathway, and that their upregulation may contribute to breast tumour progression [5]. Li et al. indicated that highly up-regulated in liver cancer (HULC) promotes the phosphorylation of Y-box binding protein 1 through the extracellular signal-regulated kinase pathway, in turn regulates the interaction of YB-1 with certain oncogenic mRNAs [6]. However, the exact underlying molecular mechanism and the clinical implications of lncRNAs were still largely unknown.

Long intergenic non-coding RNA 00152 (LINC00152) was suggested to have oncogenic impacts on several cancers [7–15]. It is located on chromosome 2p11.2, which has a transcript length of 828 nucleotides. Recently, Nötzold et al. found that cells depleted of LINC00152 arrested in prometa phase of mitosis and showed reduced Hela cell viability [16]. In RNA affinity purification (RAP) studies, the researchers indicated that LINC00152 interacted with a network of proteins which were associated with M phase of the cell cycle [16]. Chen et al. found that the expression of LINC00152 was significantly associated with tumor invasion depth, lymph node metastasis, and higher tumor-node-metastasis (TNM) stage in gastric cancer [11]. Another group also found that LINC00152 expression was correlated with higher TNM stage, larger tumor size, and lymph node metastasis in lung cancer [7]. In addition, Yu et al. suggested that the increased expression of LINC00152 was significantly correlated with T stage, N stage, TNM stage, and invasion in tongue squamous cell carcinoma [4]. Therefore, we supposed that LINC00152 might influence the survival of patients with cancers. However, no meta-analysis has been performed to evaluate the association between LINC00152 and the survival of patients with cancers. We thus carried out this study.

Figure 1 showed the process of identifying relevant studies. Thirty-two studies were found in the initial search. After a detailed evaluation, 23 studies were excluded. Finally, 9 studies with 862 patients with cancer were included in this meta-analysis. Colorectal cancer, gastric cancer, renal cell carcinoma, gallbladder cancer, lung cancer, hepatocellular carcinoma, and tongue squamous cell carcinoma were investigated in the original studies. Table 1 showed the characteristics of the included studies. Only 4 studies could provide the data of overall survival (OS). 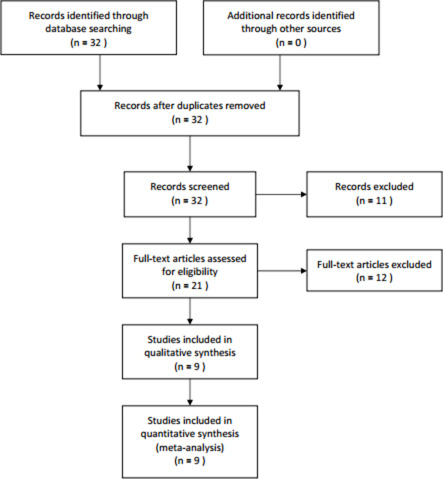 *no data of OS could be extracted.

Table 2: The association between LINC00152 and clinicopathological parameters

Many evidence suggested that LINC00152 may participate in the carcinogenesis of cancers [17]. Thus, we conjectured that LINC00152 could change the prognosis of patients with cancers. To our knowledge, this was the first meta-analysis to evaluate the association between the expression of LINC00152 and clinicopathological parameters in cancers. In the present meta-analysis, we found that LINC00152 was significantly associated with lymph node metastasis and TNM stage. Chen et al. found that LINC00152 overexpression could facilitated gastric cancer cell proliferation by accelerating the cell cycle [14]. Cai et al. suggested that LINC00152 could promote cell migration, invasion and epithelial–mesenchymal transition (EMT) progression in vitro [11]. Ji et al. found that LINC00152 could promote cell proliferation in vitro and tumor growth in vivo [18]. However, silencing LINC00152 can suppress the cell proliferation and invasion in hepatocellular carcinoma cells [8]. The mechanism investigation suggested that LINC00152 inhibited the E-cadherin expression via interacting with EZH2 and promoted the Epithelial-mesenchymal transition (EMT) phenomenon in HCC cells [8]. These data might explain why the patients with high level of LINC00152 showed lymph node metastasis and TNM stage. Furthermore, we found significant positive associations between LINC00152 and tumor recurrence and shorter OS of patients with cancer. Thus, LINC00152 might be a potential biomarker in patients with cancer. The doctors should pay more attention to the cancer patients with high expression of LINC00152. However, Qiu did not found LINC00152 was a significant predictor of survival in colorectal cancer [16]. Thus, future studies with colorectal cancer patients are requested to determine this issue.

Some limitations of this meta-analysis should be acknowledged. First, only 4 studies could provide the survival data and only 1 study could provide the disease-free survival data. The sample size recruited in the analysis of overall survival was too small, which could not provide statistical power to make significant conclusion. Second, no study from other countries was included in our study. Third, only studies which were indexed by the selected databases were included for data analysis. Fourth, biomarkers are specific for different cancer types or cancer subtypes, especially for LncRNA, because many LncRNAs function in a cell-type-specific way [18]. However, we could not perform a subgroup analysis in a specific cancer or according to the ethnicity due to limited data. We also could not do an in vitro experiment. Thus, more studies from other countries are needed to confirm the results from this meta-analysis.

In conclusion, the results of this meta-analysis suggest that LINC00152 might be a biomarker for shorter OS and tumor recurrence in cancers.

The online databases, such as PubMed, EMBASE, and the Cochrane controlled trials register, were searched to identify relevant articles published up to MAY 2017 in any language. The electronic search included the terms: LINC00152 and “cancer or carcinoma or neoplasm or tumor”. We also reviewed the reference lists of original reports and reviews. Country was not restricted in this search.

Two authors reviewed and extracted the data from original studies independently. The following data were extracted: the first author’s name, year, gender of the patient, site of cancer, tumor stage, sample size, outcome, and co-variants. We used the Newcastle-Ottawa Scale (NOS) to assess the methodological quality of included studies [22].

Dichotomous data were analyzed using the odds ratio (OR) as the summary statistic. The association between LINC00152 and survival of cancer was analyzed by pooling the HR with its corresponding 95% CI. The heterogeneity investigted by using the chi-squared based Q-statistic test. The random-effects model was used to analyze the pooled HRs. If the number of included studies was more than 10, funnel plot was used to analyze the publication bias. All the P-values were determined by a 2-sided test. All statistical analyses were conducted using RevMan 5.1 software (Nordic Cochrane Center, Copenhagen, Denmark).