*Authors contributed equally to this work

Background: Telomere length (TL) has been reported to be associated with the risk and survival of several cancers. But it is unclear for the prognostic role of TL in colorectal cancer (CRC).

Conclusions: Current evidence did not provide solid indication that long TL is significantly associated with improved or poor survival for patients with CRC. Further large sample size prospective cohort studies are warranted to determine the true relationship for specific patients.

As a critical structure with numerous DNA sequences of TTAGGG tandem repeats located at the end of linear chromosomes in eukaryote cells, telomere has reported to plays an important role in the protection of genomic instability and DNA degradation [1, 2]. The persistent cell proliferation makes telomere shorten year by year, and meanwhile telomerase activity decreases gradually. The chromosome instability resulting from abnormal alteration of telomere length (TL) may lead to carcer occurance [3].

The associations between TL and cancer risk, mortality and progression have been reported in numerous studies with controversial results [4–14]. Svenson et al. found that TL was shorter in tumor tissues than the adjacent non-tumorous tissues [15]. Moreover, studies in a number of malignancies have showed that abnormal alternation of TL in peripheral blood leukocytes is significantly correlated with the mortality and progression of cancer patients, such as breast cancer, prostate cancer, gastric cancer and non-small cell lung cancer [16–19]. However, the prognostica value of TL for colorectal cancer (CRC) has not been fully determined.

In a meta-analysis conducted by Zhang et al. [20], they found that short telomeres were associated with increased CRC mortality, which was also reported by Jia et al [21]. However, due to the small sample size and great heterogeneity among studies in those two studies, we updated the systematic review and meta-analysis to reevaluate the prognostic significance of TL in CRC.

Description of the search and selection of studies

There were a total of 1119 citations identified for eligibility through database search. After exclusion of duplicate publications, screening of the titles or abstracts, there remained 43 citations for full text review. When excluding the studies unsatisfied for the inclusion criteria, we finally enrolled a total of 8 cohort studies encompassing 1622 patients with a median sample size of 131 (range 57 to 571) for this meta-analysis [22–29]. Data on OS and disease-free survival (DFS)/recurrence-free survival (RFS)/progression-free survival (PFS) were available from 7 and 5 studies, respectively (Figure 1). 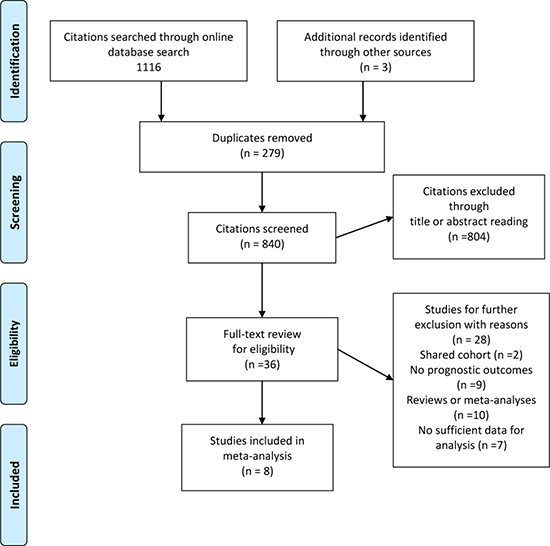 The basic elements of all the included studies are presented in Table 1. They were all published in English peer-reviewed journals between 2004 and 2016. Five of 8 of the included studies were conducted in Europe, the other three were in USA, Australia and China, respectively. The sample origins were from peripheral leukocytes in two studies [23, 28] while others were from tumor tissues [22, 24–27, 29]. Eight studies investigated I-IV stage CRC patients and only one of them involved stage IV patients [29]. Five studies used qPCR to measure TL while three used Southern blot. The Newcastle-Ottawa scale (NOS) score of methodological quality assessment ranged from 6 to 8 with 5 studies gaining a score of 7 or above (Table 1). 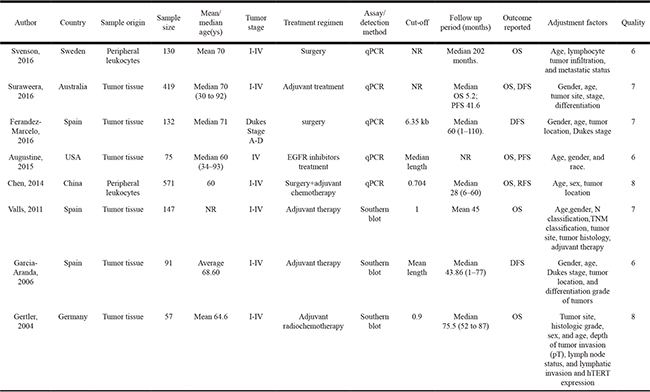 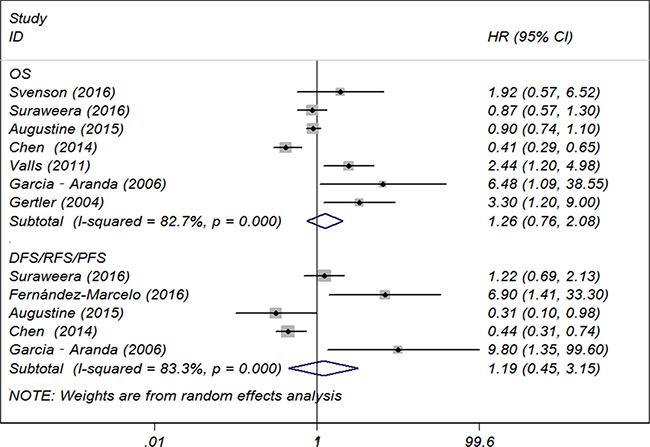 Table 2: Subgroup analyses based on some baseline features of included studies for overall survival

For OS subgroup, Begg’s test (P = 0.368) and Egger’s test (P = 0.197) indicated the absence of publication bias (Figure 3). Sensitivity analyses by applying the trim-and-fill method generated similar adjusted estimate (HR 0.98, 95% CI, 0.60 to 1.60) with the primary analyses. As there were only five studies included in the DFS/RFS/PFS subset, the publication bias was not examined. 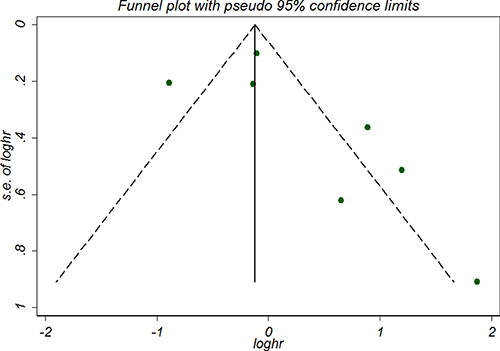 Principal findings of this study

The results of this meta-analysis including 8 cohort studies enrolling 1622 patients showed a neutral prognostic effect of TL on CRC survival in terms of OS and DFS/RFS/PFS. Subgroup analyses found that long TL (versus short TL) was significantly associated with poor OS in studies conducted in Europe, using Southern blot to measure TL and patients’ age more than 60 years. We found no significant associations between TL and patient DFS/RFS/PFS.

Although the results reported within the current meta-analysis did not quite agree with previous ones which showed that TL was significantly associated with patient OS. Jia et al. repoted that short TL in peripheral blood leukocytes was significantly associated with poorer OS with fixed-effects model (HR 2.01, 95% CI 1.46 to 2.77) by pooling data from four studies [21]. Zhang et al. also summarized the four studies and obtained similar result [20]. These two studies, however, have limited implications for this topic for the low statistical power with small sample size of included studies. Another recently published study by Adam et.al. [30] also found null association between TL and cancer outcomes. However, it is not just focused on CRC and with limited subgroup analyses.

Strengths and limitations of the study

There are some limitations to our study. First of all, despite the largest number of studies and patients included on the association between TL and CRC survival, most were small, single-center studies with a higher risk for biases. Secondly, the small number of included studies limited further subgroup analysis and had relatively lower statistical power of the relationship between TL and CRC outcomes. Moreover, DFS, RFS and PFS were combined as the same outcome which could lead to significant heterogeneity as these outcome measures were somewhat different. Moreover, covariants among the included studies are not completely consistent. Finally, several primary selected studies or abstracts were excluded due to the unavailability of original data, which might lead to publication bias for pooled estimates.

There are a number of important strengths for our study. Firstly, we used rigorous search strategies to systematically identify all relevant studies to examine the effect of TL on CRC outcomes. Secondly, significant inter-study heterogeneity was detected in terms of characteristics of observational studies, patient selection (study region, age, tumor stage, etc.), exposure factors (TL measurement methods, cutoffs for long and short TL), therapeutic schedules and outcome reported, though several prespecified subgroup analyses and sensitivity analysis were conducted to explore the sources of heterogeneity. Still several other sources of heterogeneity could not be determined. Additionally, some other factors, such as different study design (prospective versus retrospective), tumor KRAS/BRAF/PIK3CA mutation status that affected the survival of CRC patients should also be attributed to some of the heterogeneity. Based on the results of subgroup analyses (Table 2), we noted that I2 was significantly reduced when analyses were stratified by research region, TL detection method and follow-up period, indicating that these three factors could be part of the sources of heterogeneity. Thirdly, we used a validated scale, NOS to assess the quality of the study evidence for every cohort as was suggested by Cochrane. Fourthly, a relatively large sample size including over 1500 patients made the quantitative analysis more reliable on the association between TL and CRC prognosis. Fifthly, we evaluated each citation by cross-checked means during the process of study screening, data abstraction and quality assessment to maximally minimize selection bias, making the systematic review more objectively.

In summary, current evidence did not provide solid indication that long TL is significantly associated with improved or poor survival for patients with CRC, although the real association remains to be further confirmed by the existing evidence. However, in some subgroups, it provides evidence that in specific population with standard TL detection method (Southern blot) or long-term follow-up (≥ 60 months), long TL may serve as a prognostic biomarker for patients with CRC. Further large sample size prospective cohort studies are warranted to determine the true relationship for some of those specific patients.

We developed the search strategies based on the preferred reporting items for systematic reviews and meta-analysis (PRISMA) statement [31]. PubMed, Embase and the Cochrane Library Central Register of Controlled Trials databases from inception through April 2017 were systematically searched for studies investigating the associations between TL and CRC prognosis. Detailed search strategies of the above three databases were presented in Supplementary Table 1. In summary, the following searching terms or phrases with the combinations queries with Boolean logic were used: ‘telomere’ or ‘telomeres’ or ‘telomeric’, ‘colorectal’ or ‘colonic’ or ‘rectal’, ‘cancer’ or ‘neoplas*’ or ‘carcinoma’, ‘mortality’ or ‘prognosis’ or ‘prognostic’ or ‘survival’. We limited the language of included studies only to English, as studies published in other languages were often difficult to interprete and not available for readers.

Two investigators (W.W., L.Z. or N.Z.) evaluated the the titles or abstracts through the primary literature search independently. The final included articles were cross-checked for eligibility by a third investigator (Y.Z. or Y.T.) if necessary until agreement was reached. The inclusion criteria for study eligibility were set as follows: observational (prospective or retrospective) studies reported prognostic outcomes for blood sample or tumor tissue relative TL (long versus short) in CRC patients, and studies provided the definite survival data [risk estimates such as HRs/relative risks (RRs) with 95% CIs obtained directly or estimated through other method [32]. For those overlapped prognostic data, the most recent and comprehensive one was selected for inclusion. Since the low quality of unpublished data and abstracts, we did not include these studies.

We applied NOS to assess the quality of each included study, which was calculated based on three major aspects of cohort studies including selection and comparability of study groups, ascertainment of the outcome of interest [33]. Two investigators scored the study quality independently (score range for cohort study 0–9), with a higher score representing better methodologic quality.

All the data were pooled using STATA software 12.0 (StataCorp LP, College Station, TX, USA). We abstracted study estimates (HRs or RRs with 95% CIs) with full adjustments from the included studies and pooled using random-effects model [34] due to the proposed high inter-study heterogeneity. An estimated HR > 1 implied a poor survival for the patient with longer TL (compared with shorter TL). Inter-study heterogeneity was assessed using I2 statistic and the Cochrane Q statistic, which was defined as an I2 > 50% and p-value < 0.10 indicating substantial heterogeneity, respectively [35]. If the potential heterogeneity existed, subgroup analyses were performed based on some of the baseline variables that the heterogeneity could attibute to.

Potential publication bias was evaluated by visual inspection of a funnel plot symmetry and by Egger’s test or Begg’s test [36, 37]. Duval’s nonparametric trim-and-fill method [38] was also applied to adjust the pooled estimates for investigating the potential effect of publication bias.

33. Stang A. Critical evaluation of the Newcastle-Ottawa scale for the assessment of the quality of nonrandomized studies in meta-analyses. Eur J Epidemiol. 2010; 25:603–605.