Diagnostic value of contrast-enhanced ultrasound in hepatocellular carcinoma: a meta-analysis with evidence from 1998 to 2016

Background: This meta-analysis is aimed at determining the diagnostic value of hepatocellular carcinoma (HCC) with contrast-enhanced ultrasound (CEUS).

Materials and Methods: A comprehensive literature search of Pubmed, Web of Science, and the Cochrane Library was performed to identify published studies. The methodological quality of the included studies was evaluated. Data from eligible studies were used to estimate the pooled sensitivity, specificity, diagnostic odds ratio (DOR), positive and negative likelihood ratio (LR) and summary receiver operating characteristic (SROC) curve. Meta-Disc and STATA softwares were utilized for all statistical analyses.

Conclusions: CEUS is a valuable diagnostic tool for identifying HCC in clinic with highly sensitive and specific.

According to the statistics, hepatocellular carcinoma (HCC) ranks the fifth most common cancer in men, the seventh in women [1]. An estimated 782,500 new liver cancer cases and 745,500 deaths occurred worldwide during 2012, with China alone accounting for about 50% of the total number of cases and deaths [2]. Nowadays, HCC remains the life-threatening complaint despite the advanced surgical procedures and other nonoperative methods, with 5-year overall survival rate is less than 10% in its advanced stage [3]. Hence, early accurate diagnosis should be performed to improve patient’s prognosis. Thanks to the typical hemodynamic changes of HCC (hypervascularity in the arterial phase followed by “washout” on portal or delayed phases), [4] the noninvasive diagnosis through imaging examinations could be reached without histologic confirmation.

However, currently established guidelines by the Association for the Study of Liver Diseases (AASLD), Liver Imaging Reporting and Data System (LI-RADS), and the Asian-Pacific Association for the Study of the Liver (APASL) all endorse multi-detector spiral CT and MRI with contrast agents as the first line modalities for diagnosing HCC [5–7], although ultrasound (US) is the more often used modality to monitoring the patients with hepatic cirrhosis who are at high risk for HCC in clinical practice [4]. In recent years, micro-bubble based contrast agents have greatly improved the sensitivity as well as specificity for characterization of focal liver lesions (FLLs) during the ultrasound examinations [8]. While, the role of contrast-enhanced ultrasound (CEUS) as a first line procedure for diagnosis of HCC still remains controversial. Some physicians are not convinced regarding the value of CEUS for the diagnosis of HCC. To this end, this systematic review and meta-analysis is conducted to evaluate the diagnostic value of CEUS in HCC.

A comprehensive literature search was conducted and revealed 3252 primary studies. Two studies were excluded due to duplicated publications. After reviewing the titles and abstracts, 2112 studies were excluded with the reasons as follows: (1) non-prospective / retrospective articles (meta-analyses, reviews, letters, case reports or editorial articles); (2) non-CEUS-related articles; (3) non-HCC related articles; (4) non-diagnostic tests. The remaining 238 articles were further assessed by screening the full texts, among which 185 articles were excluded due to (1) non-English published studies; (2) insufficient information; (3) not full text available; (4) sample size < 20; (5) repetitive study. Eventually, 53 eligible articles [9–61] were included in this meta-analysis. Detailed selection process was illustrated in a flow chart (Figure 1). 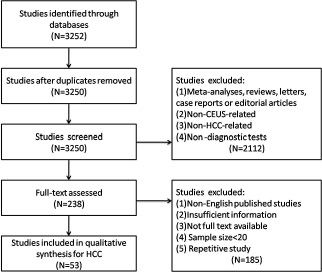 The detailed characteristics of the 53 studies are presented in Supplementary Table 1. The average age of the patients included in the eligible studies ranged from 44 to 71. And there were 5977 lesions in total, with more than 4827 patients (the numbers of patients were not mentioned in two studies). The publication years ranged from 1998 to 2016. There were 34 studies conducted in Asian population, and 19 studies conducted in European and American population. The second generation contrast agents for CEUS (SonoVue, Sonazoid and Definity) were used in 40 studies along with the first generation contrast agent (Levovist) in 13 studies. The methodological quality of the included 53 studies is also summarized in Supplementary Table 1. 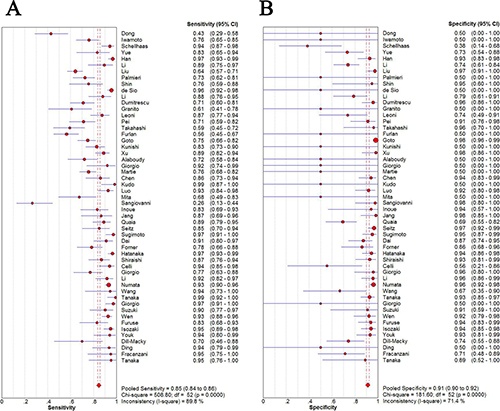 Figure 2: Sensitivity (A) and specificity (B) of diagnosis of HCC with CEUS. 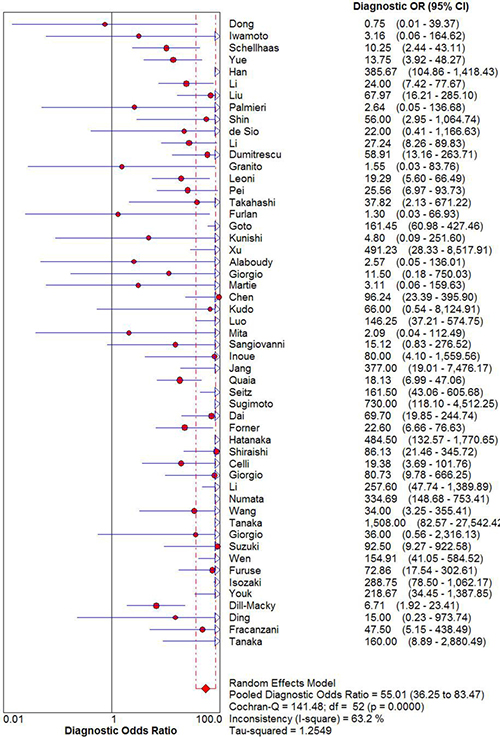 Figure 3: DOR of diagnosis of HCC with CEUS. 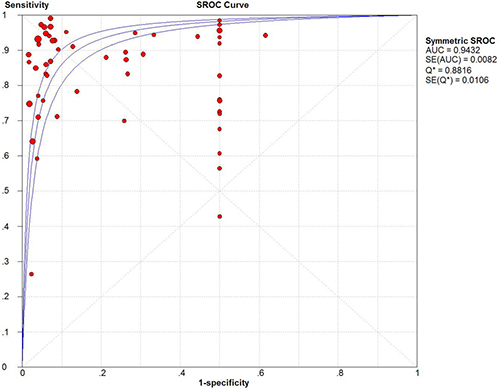 As seen in the forest plots (Figure 2 and Figure 3), all indices of diagnostic accuracy denoted heterogeneity. Spearman correlation coefficient showed there was no significant correlation between sensitivity and specificity (r = 0.060, P = 0.669), which indicated no threshold effect. To further explore the sources of heterogeneity, meta-regression analysis was performed based on district (group1: Europe and America, group2: Asia), sample size (group 1: n < 100, group 2: n ≥ 100) and type of contrast agents (group 1: SonoVue, group 2: Sonazoid, group 3: Definity, group 4: Levovist). The results indicated that sample size and type of contrast agents might be the major sources of heterogeneity (P = 0.002, P = 0.009, respectively) (Table 1). 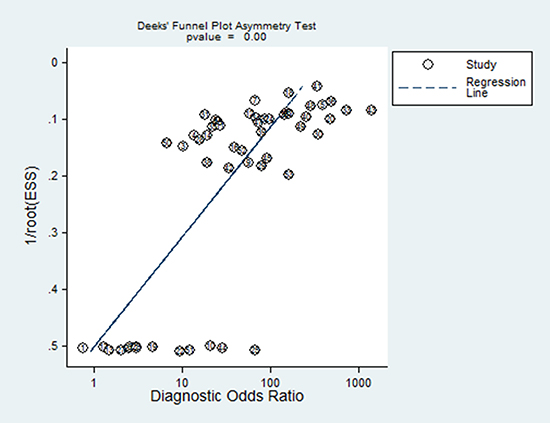 Figure 5: Funnel plot of publication bias on the pooled DOR.

The utilization of microbubble-based ultrasound contrast agents along with the advanced US imaging techniques now allows stable observation and detailed evaluation of the tissue macro and microvascularization in both qualitative and quantitative manner [62]. According to other literatures, the ability of CEUS is similar to contrast-enhanced computed tomography (CECT) and contrast-enhanced resonance magnetic imaging (CEMRI) [63–64]. Beyond that, CEUS has unique advantages over CECT and CEMRI in the characterization of hepatic lesions. These include the capability of real-time dynamic imaging, repetitive observation of tumor vascularity with multiple injections of these contrast agents, and the unique intravascular properties with excellent safety profile of the microbubbles, which allow the applications in patients with decreased renal function [8]. Although, the Food and Drug Administration (FDA) in U.S. finally approved their applications for a noncardia use in 2016, CEUS has been widely used for liver imaging especially for characterizing the HCCs in European and Asian countries for more than ten years [65]. This license might result in a possible breakthrough in the field of CEUS study.

The HCC multistep carcinogenesis (from regenerative nodule to dysplastic nodule, ending with HCC) leads to changes in blood supply within the nodule, which eventually forms increased tumoral arterial supply along with decreased normal arterial supply and portal supply as a consequent [66]. Thus, HCC is characterized by arterial phase hypervascularity followed by later and low washout on CEUS. Several researchers suggest that CEUS is superior to CT or MRI due to the real-time observation of arterial phase enhancement which might be missed by CT or MRI because of the predetermined scanning delay [67–68]. In our meta-analysis which performed on 53 eligible studies, the pooled sensitivity, specificity and DOR of CEUS for diagnosis of HCC were 0.85, 0.91 and 55.01, respectively. The pooled positive and negative LRs were 6.28 and 0.16, respectively. All the results implied that CEUS might be the excellent choice in the diagnostic work-up of liver malignant lesions. Nevertheless, there still exist some disadvantages of CEUS. The main drawback is the operator-dependency in US examination. While our comprehensive meta-analysis showed good pooled diagnostic values with relatively narrow confidence intervals, indicating with certain skills and experience, most of the sonographers might achieve closely high diagnostic capability.

Moreover, some limitations in our meta-analysis should be acknowledged. Firstly, due to the publication bias explored in this meta-analysis, the pooled estimates might be more optimistic than they actually are, as studies with positive data are more likely to be published. Secondly, some studies indicated that the vascularity in small nodule could not be easily assessed by CEUS [69]. But since the data on small nodules couldn’t be obtained in most of the eligible studies, the diagnostic value of CEUS for small HCC could not be estimated at present.

In conclusion, this comprehensive meta-analysis demonstrates the magnitude of the importance of CEUS in the diagnosis of HCC. Because of the advantages mentioned above, this approach would offer a major role in the diagnosis area, and additionally CEUS might become a first-line imaging tool in the future.

Two reviewers separately selected the eligible studies with disagreements disposed by consensus. Studies were considered eligible if they fulfilled the inclusion criteria: (1) full article published in English with the full text available; (2) articles dealing with the diagnosis of contrast-enhanced ultrasound for HCC; (3) articles confirmed the diagnosis with the reference standard as histopathologic analysis and/or close clinical diagnosis with imaging follow-up; (4) published data in the fourfold (2 × 2) tables or articles presented sufficient data to calculate the true-positive (TP), true-negative (TN), false-positive (FP) and false-negative (FN); (5) at least 20 patients were included in the study. Studies were excluded when they were (1) meta-analyses, reviews, letters, case reports or editorial articles; (2) not clinical studies; (3) not using CEUS to diagnose HCC; (4) the patients were not confirmed the diagnosis with the above standards. If there existed more than one study by the same authors using the same cases published, either the most recently published studies or the study with the largest sample size was included.

The methodological quality of eligible studies was assessed by the quality assessment tool for diagnostic accuracy studies (QUADAS). It contains fourteen assessment items, each of which was assessed as “yes” (1 score) or “no” (0 score) or “unclear” (-1 score).

Softwares of Meta-Disc (version 1.4, Universidad Complutense, Madrid, Spain) and STATA (version 11.0, STATA Corporation, College Station, Texas, USA) were used for all statistical analyses. For each study, we constructed 2 × 2 contingency tables wherein all subjects were classified to have positive or negative CEUS results. If one contingency table had a cell with no events, we added 0.5 to all cells. We calculated the sensitivity as TP/(TP+FN), the specificity as TN/(TN+FP), the positive likelihood ratio (PLR) as sensitivity/(1-specificity), the negative likelihood ratio (NLR) as (1-sensitivity)/specificity, and the diagnostic odds ratio (DOR) as (TP × TN)/(FP × FN) along with their 95% confidence intervals (CIs). The summary receiver operating characteristic (SROC) curve, the area under the curve (AUC) as well as the Q* index were calculated. The threshold effect was tested by the Spearman correlation coefficient. The heterogeneity was assessed by Cochran’s Q statistic and I2 test. When I2 ≥ 50% or Pheterogeneity < 0.05, the random effect model was used in this meta-analysis, otherwise the fixed effect model was used. Potential sources of heterogeneity were explored by regression analysis. The potential publication bias was assessed by the funnel plot. P values were two-sided and difference was considered as statistically significant when P < 0.05.

39. Quaia E, Alaimo V, Baratella E, Medeot A, MidiriM, Cova MA. The added diagnostic value of 64-row multidetector CT combined with contrast-enhanced US in the evaluation of hepatocellular nodule vascularity: implications in the diagnosis of malignancy in patients with liver cirrhosis. Eur Radiol. 2009; 19:651–63.