Background: There are currently 2 Tumour-Node-Metastasis (TNM) staging systems for pancreatic neuroendocrine tumours (p-NETs) - European Neuroendocrine Tumour Society (ENETS) and American Joint Committee on Cancer (AJCC). P-NETs being heterogeneous, we investigated the prognostic value of the 2 systems in p-NETs, as a whole, and more interestingly in functional and non-functional sub-groups separately, with a view to ascertaining any potential clinical benefits of using one system over the other.

Results: In the whole group of 165 patients, both TNM systems successfully discriminated OS differences when comparing stages I and II with stages III and IV (P<0.05); ENETS stage III patients had a significantly better OS than those in stage IV (P=0.003). Patients with functional p-NETs in ENETS stage II showed a statistically better OS than those in stages III and IV (P<0.05). For non-functional tumours, the AJCC staging system could effectively discriminate between the OS differences of patients in stage I with stages III and IV, or stage II with III and IV (P<0.05). Along with surgical intent and World Health Organisation (WHO) 2010 grade, both ENETS and AJCC staging systems were effective predictors of OS for different function-status p-NETs.

Conclusions: The ENETS system might have potential advantages when applied to all p-NETs and to the functional sub-group, while the AJCC system might be clinically more practical for non-functional p-NETs.

Pancreatic neuroendocrine tumours (p-NETs) are rare, accounting for <3% of all pancreatic tumours with an annual incidence of approximately <1 per 100,000 population [1-4]. They have shown an increasing prevalence over the past two decades largely due to widespread awareness and advances in diagnostic techniques [2-6]. P-NETs may produce a variety of hormones, such as insulin, gastrin, glucagon, vasoactive intestinal peptide (VIP), serotonin, somatostatin, adrenocorticotropic hormone (ACTH), etc. and are regarded as functional when hormone overproduction is associated with clinical features of the same [7]. In contrast, p-NETs without corresponding symptoms of hormone overproduction are considered to be non-functional, which may present with abdominal pain, jaundice, weight loss or other non-specific symptoms or may be detected incidentally [6, 8, 9]. Now, there are no universally accepted definitions of functional and non-functional p-NETs [3, 10, 11].

Due to their rarity and heterogeneous nature, p-NETs have been poorly defined, and the ability to classify patients with p-NETs into prognostic groups has always been challenging [6]. At present, there are two main Tumour-Node-Metastasis (TNM) systems to stage p-NETs. The European Neuroendocrine Tumour Society (ENETS) staging system [12] was proposed by Rindi et al. in 2006 for gastrointestinal and pancreatic neuroendocrine tumours. The American Joint Committee on Cancer (AJCC) staging system [13] was proposed in 2010 and subsequently endorsed by both the International Union for Cancer Control (UICC) [14] and the World Health Organisation (WHO) [15], which was primarily applied to classify pancreatic exocrine tumours. These two systems differ much in their respective definition of ‘T’ stage (Table 1), which results in corresponding differences when staging p-NETs. AJCC stage I disease encompasses all tumours that are confined to the pancreas, whereas ENETS stage I is restricted to tumours confined to the pancreas and <2cm in diameter; ajcc stage iii disease refers to locally advanced tumours involving the superior mesenteric artery or coeliac axis, whereas enets includes that may be resectable unresectable [16]. Meanwhile, it is difficult to distinguish T2 and T3 AJCC stages as this requires the identification of peri-pancreatic soft tissue invasion, which is sometimes challenging [17, 18].

Some studies have validated and compared the 2 TNM staging systems and their ability to prognosticate effectively in terms of the overall survival (OS) of p-NETs [16, 19-23], but few evaluated them for functional or non-functional tumours respectively. In the present study, undertaken at a single specialist centre in China, we investigated the prognostic value of the two TNM systems in patients with p-NETs, as a whole, and more interestingly in functional and non-functional groups separately, with a view to ascertaining any potential clinical benefits of using one system over the other in each of these two sub-groups.

As Table 2 showed, a total of 165 eligible patients were enrolled in our present study. A hundred and ten patients (66.7%) had functional p-NETs, while 55 cases (33.3%) were diagnosed as non-functional. Seventeen patients (10.3%) with asymptomatic non-functional p-NETs were detected incidentally by health examination. All patients underwent pancreatic surgery including 143 patients (86.7%) with radical resections and 22 (13.3%) with palliative or explorative operations. The clinical characteristics of all patients with p-NETs were clearly outlined in Table 3. Based on the available pathological information of all specimens, the WHO 2010 grading classification was only applied to 114 tumours - there were 62 NET G1, 35 NET G2, and 17 neuroendocrine carcinoma (NEC) G3. Patients had a median follow-up time of 49.7 months and a mean of 52.5 ± 32.5 months (range 5.9 to 135.9), with 41 (24.8%) dead ones.

Table 2: Functional sub-groups and surgical procedures undertaken for all p-NETs

Table 3: Characteristics of functional and non-functional sub-groups of p-NETs

Stages and OS by ENETS and AJCC 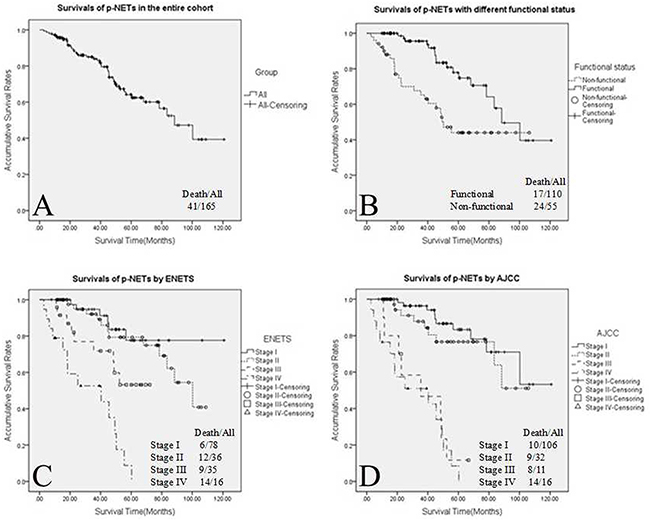 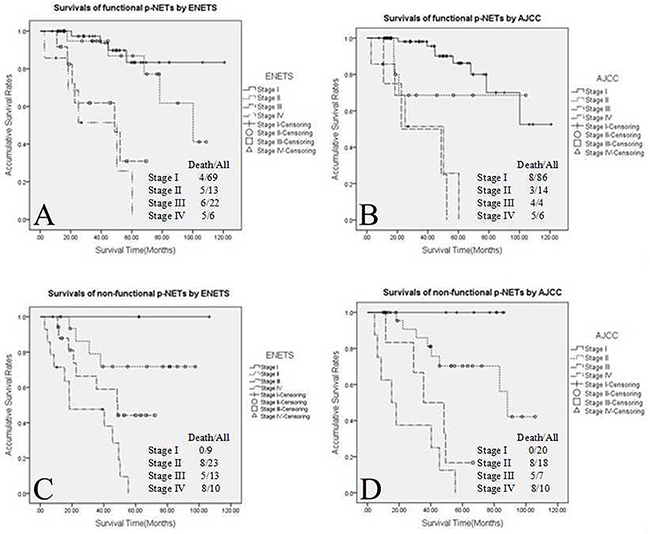 For the whole group of p-NETs (Table 4), patient age, tumour size, hormone status, surgical intent, WHO 2010 grade, stage by both ENETS and AJCC were all significantly associated with the OS of p-NETs on univariate analysis (all P<0.05), while patients gender, tumour location and main operation weren’t (all P>0.05). Further multivariate analyses indicated that only surgical intent, WHO 2010 grade, ENETS and AJCC stage were statistically valuable predictors of OS in p-NETs (Table 5).

Table 4: Univariate analysis of predictors of overall survival in patients with p-NETs

Also in Table 4, the simultaneous univariate analyses for different function-status p-NETs revealed that tumour size and location, and the main operation performed were associated with the OS in the functional group (all P<0.05), but not in non-functional tumours (all P>0.05). We further calculated on multivariate analyses that, for both functional and non-functional p-NETs sub-groups, surgical intent, WHO 2010 grade, ENETS and AJCC stage were also significant prognostic factors (Table 5).

Table 5: Multivariate analysis of predictors of overall survival in patients with p-NETs

TNM staging is a useful instrument for death-risk assessment and patient stratification that may facilitate effective management, if it accurately reflects the biological behavior and natural history of the cancer that it is being applied to [22]. However, currently, presence of these two TNM systems for p-NETs by ENETS and AJCC might have caused clinical confusion in disease stratification and patient management [17, 27]. Also, p-NETs are more indolent in their biological behaviors, with a corresponding better OS than pancreatic exocrine tumours [28, 29]. Therefore, evidence is essential for the development and application of a uniform TNM staging system for this group of tumours [30]. A comparative study in 2012 by Rindi et al. [22] concluded that although both TNM systems were independent predictors of OS for p-NETs, the ENETS staging system was superior to the AJCC manual, which demonstrated a more accurate predictive ability for each stage. This result has also been reported by some other subsequent studies [19, 20, 23]. In the present study, as we described before, when investigating all p-NETs, the analyses similarly indicated that the ENETS system could also more effectively discriminate the OS difference between stages III and IV (P=0.003) as compared to the AJCC system (P=0.601).

Several studies have confirmed the prognostic value of both TNM systems [16, 19-23]. In our study, the Cox Regression proportional hazards model analyses revealed that stage using both ENETS and AJCC systems, surgical intent and WHO 2010 grade were influential predictors of p-NETs with different functional status, which was similarly in accordance with our previous work [19, 37, 38]. Tumour size and hormone status were not found to be independent predictors of OS for p-NETs, unlike the reports by Halfdanarson et al. [3] and Bilimoria et al. [39]. Tumour size and location, and main operation were demonstrated to be statistically associated with OS of functional tumours on univariate analysis, but not for non-functional p-NETs [40]. Meanwhile, multivariate modeling demonstrated that although both TNM systems were independent predictors of OS, the AJCC 2010 staging manual showed a larger 95% CI for all patients and in the functional sub-group, while the ENETS 2006 staging system showed a larger 95% CI in non-functional tumours, indicative of a relatively imprecise predictive ability. Our demonstrations indicated that it might be more proper to respectively apply different TNM staging system to different functional-status p-NETs.

The highlight of our study was that it was the first attempt, using a large consecutive series of data from a single institution, at separately validating the 2 TNM staging systems in the functional and non-functional sub-groups of p-NETs to determine which one was more suitable in terms of its prognostic performance. While the potential significance of this study was its contribution to investigating the clinical application of the ENETS and AJCC systems in staging functional and non-functional p-NETs and the further development of these staging systems in p-NETs, it had some limitations. The study was retrospective and conducted at a single centre. Further multi-centre, prospective studies were warranted.

In summary, both TNM staging systems (ENETS and AJCC) were significant predictors of OS for patients with p-NETs, irrespective of functional status. The ENETS system have potential advantages when applied to all p-NETs and to the functional sub-group, while the AJCC manual might be more clinically applicable for non-functional p-NETs.

This research was approved by the local ethics committee of West China Hospital, Sichuan University, in accordance with the general principles of the Helsinki Declaration [24]. Written informed consent was obtained on admission from all patients for their information to be used for research. Electronic or paper-based medical records of consecutive patients, who were all surgically treated and pathologically diagnosed as p-NETs between January 2002 and February 2014, were retrospectively reviewed. Patients, in whom there was only clinical suspicion but no postoperative pathological confirmation of p-NETs, were excluded from this study. Only four patients underwent regular postoperative medical treatment, who were also excluded in our research. Furthermore, five patients with hereditary syndromes, including multiple endocrine neoplasia type I, von Hippel-Lindau syndrome weren’t enrolled as well.

Follow-up was conducted mainly by telephone or outpatient clinic appointments. OS was calculated as the number of months from the date of operation to the date of last contact or time of death.

All statistical analyses were performed using IBM SPSS 19.0 statistical software. Quantitative variables were reported as mean with standard deviation (SD) and compared using the Student’s t or the analysis of variance tests. Categorical variables were presented as numbers with their frequencies as proportions (%) and analysed using Chi-square test (or Fisher’s exact test). OS estimates and curves of relevant cases were generated and plotted using the Kaplan-Meier method and then compared using the log-rank test. Univariate and multivariate analyses were applied to explore possible prognostic factors in both functional and non-functional p-NETs, using the Cox Regression proportional hazards model. Hazard ratio (HR) with 95% confidence interval (CI) was calculated for each variable. A P value of less than 0.05 was considered to be statistically significant.

We declared that there was no competing interests among the authors.

This work was supported by the Application Infrastructure Projects of Sichuan Province (2014YJ0180) and the NIHR Biomedical Research Unit Funding Scheme (UK).

17. Kloppel G, Rindi G, Perren A, Komminoth P, Klimstra DS. The ENETS and AJCC/UICC TNM classifications of the neuroendocrine tumors of the gastrointestinal tract and the pancreas: a statement. Virchows Archiv. 2010; 456: 595-597.

24. Crawley FP. The Limits of the Declaration of Helsinki. In: Address to Scientific Session. World Medical Association General Assembly: Helsinki, 2012.