Lung cancer is a leading cause of cancer deaths worldwide and non-small cell lung cancer (NSCLC) accounts for nearly 85% of all lung cancers [1]. Radiotherapy is one of the main approaches for locally advanced NSCLC patients that are inoperable or unwilling to undergo surgery [2]. Radiotherapy plays a vital role in regulating inflammatory factors and immune functions [3, 4]. The ionizing radiations (IR) enhance antitumor response by inducing apoptosis in tumor cells [5]. However, radiotherapy with high-dose ionizing radiation is also associated with adverse effects including neural damage, chronic pain and radioresistance [3, 6]. Also, IR affects inflammatory factors in the tumor microenvironment, resulting in chronic pain that impacts the quality of life for most patients [7, 8]. Therefore, there is urgent need for strategies to overcome the adverse effects due to radiotherapy. In some studies, adjuvant therapies have been used to improve the IR response and reduce IR injury to reduce chronic pain [9–11]. However, adverse side effects of the adjuvant therapy have restricted their use in the clinic. Therefore, newer therapeutics that enhances adjuvant treatment safety and efficacy are urgently needed.

Analgecine is a non-protein extract from inflamed rabbit skin inoculated with vaccinia virus that has been widely used for clinical applications in China to treat chronic pain conditions [12]. Its pharmacological effects include nerve repair, analgesia and immune function regulation. For example, Analgecine is usually used to treat cancer pain, post herpetic neuralgia, lower back pain, cervicodynia and peripheral neuropathies [13–15]. Moreover, clinical trials and animal experiments have demonstrated that Analgecine is effective in controlling neural damage and chronic pain [14, 16]. Liu et al. demonstrated that Analgecine reduced oxaliplatin-induced neurotoxicity in gastrointestinal cancer patients [14]. Furthermore, a randomized multicenter double-blind placebo-controlled phase 3 clinical trial showed that Analgecine effectively alleviated chronic lower back pain with fewer adverse effects [12]. Although the therapeutic effect of Analgecine on chronic pain has been established for decades, the effect of Analgecine in combination with radiotherapy against tumors has not been investigated. Therefore, we investigated if Analgecine in combination with radiotherapy may enhance the antitumor response by using the Lewis lung carcinoma (LLC) in vivo mouse model and in A549 cells in vitro. 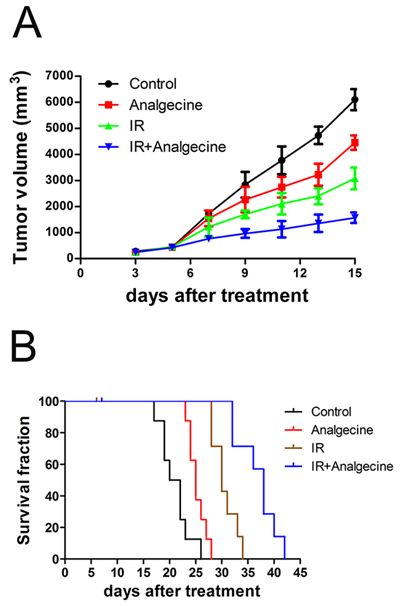 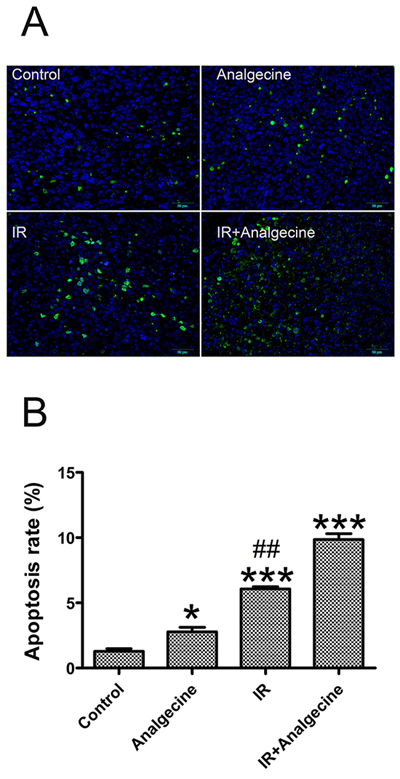 Figure 2: Analgecine in combination with IR enhances apoptosis in the xenograft LLC tumors. (A) Representative immunofluorescence image of the TUNEL assay, showing apoptotic cells in green and the cell nuclei stained with DAPI in blue. Scale bar, 50 μm. (B) The tumor cell apoptosis rate in the tumors from all 4 groups was analyzed and the average numbers of TUNEL-positive cells (green) are shown for each group. *P<0.05 and ***P<0.001 denote statistical differences compared with the control group; ##P<0.01 denotes statistical difference compared with the combination group. 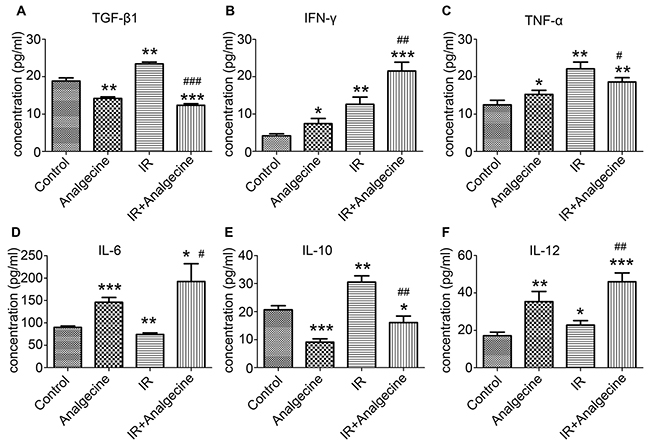 Next, we tested the effect of Analgecine on the viability of A549 cells. The combination treatment demonstrated significant decrease in cell viability compared to control (P<0.01) and IR (P<0.05) treatments based on CCK-8 assay (Figure 4A). 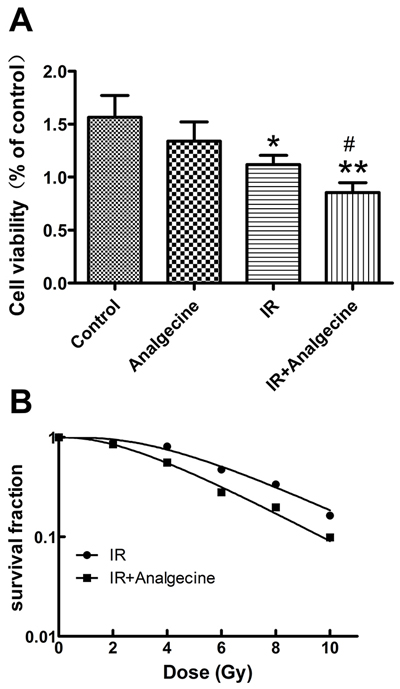 Figure 4: A549 cells treated with Analgescine and IR have reduced viability and colony formation ability. (A) Cell viability of A549 cells was analyzed by CCK-8 assay at 24h. Analgecine in combination with IR significantly decreased cell viability compared to control or IR groups. *P<0.05, **P<0.01 denote significant differences compared with the control. #P<0.05 denotes significant difference compared with irradiation group. (B) Colony formation was performed to analyze the effect of Analgecine on radiosensitivity. Analgecine plus IR treatment significantly reduced the number of colonies compared with IR and control groups at all doses. The sensitivity enhancement ratio (SER) for combination group was 1.35. The D0 and N for the combination therapy was 2.998 and 2.614, while the D0 and N for IR alone was 4.058 and 2.483. The data are representative of mean±SD of triplicate experiments.

The colony-formation assay was performed to determine the effect of Analgecine on radiosensitivity of A549 cells. We observed that total numbers of colonies in the Analgecine plus IR group were reduced compared to other treatment groups (Figure 4B). The sensitivity enhancement ratio (SER) was 1.35. 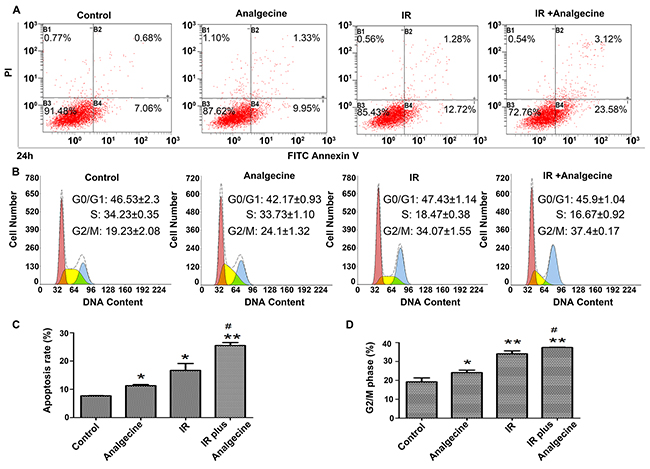 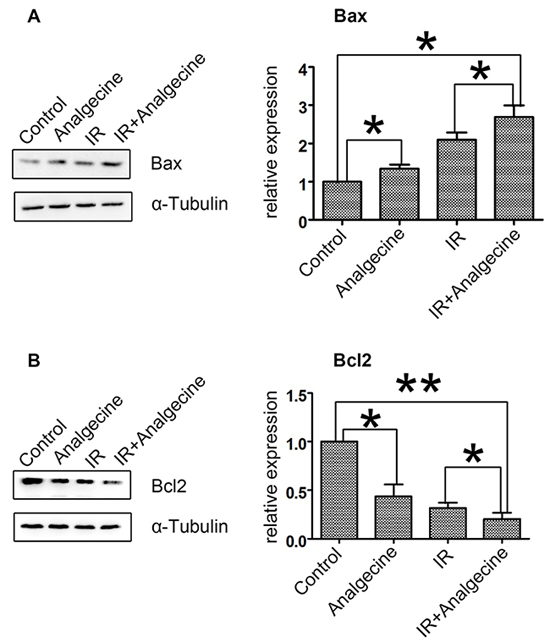 Figure 6: Effect of Analgescine plus IR treatment on Bax and Bcl2 levels in A549 cells. (A-B) Western blot analysis and quantification of pro-apoptotic Bax, anti-apoptotic Bcl2 proteins is shown. A549 cells treated with Analgecine alone or in combination with IR showed increased Bax and decreased Bcl2 compared to control. *P<0.05, **P<0.01 denote statistical differences indicated. The results are expressed as mean±SD of three independent experiments.

Further, we observed increased Bax mRNA and reduced BCl-2 mRNA in all treatment groups compared to the control (Supplementary Figure 1). 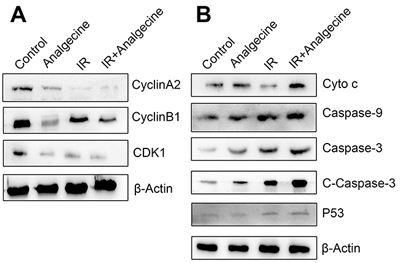 Analgecine is widely used in China to alleviate chronic pain with no reported adverse effects [12]. However, there have been no studies regarding its use in combination with radiotherapy. Therefore, we analyzed the effect of a combination of radiotherapy with Analgecine on the mechanisms underlying the antitumor responses using the LLC model in vivo and the A549 cell line model in vitro.

The in vivo LLC mouse model demonstrated that Analgecine enhanced tumor growth inhibition in combination with IR by enhancing apoptosis and inhibiting tumor cell cycle. We observed that the combination treatment increased IL-6, IL-12, and IFN-γ expression and decreased TGF-β1 and IL-10 expression [17–19]. Further, treatment with Analgecine alone or in combination with IR increased pro-apoptotic proteins like cytochrome c, caspase-3, cleaved caspase-3, caspase-9, p53 and Bax, whereas the anti-apoptotic protein Bcl2 was decreased. This indicated that Analgecine improves antitumor response with IR by enhancing apoptotic signaling [20–23].

In vitro experiments with A549 NSCLC cells further demonstrated that Analgecine in combination with IR decreased cell viability and enhanced radiosensitivity. Further, Analgecine alone or in combination with IR induced cell apoptosis and G2/M phase cell cycle arrest. This was further corroborated by significantly decreased cyclinB1 and CDK1 in the combination treatment, thereby inducing G2/M phase arrest. Previous studies have shown that targeting apoptotic pathways is a crucial strategy in antitumor therapy [24]; Also, the G2/M cell cycle phase is most sensitive to IR [25]. Based on these results, we postulated that Analgecine in combination with radiotherapy enhanced the antitumor response by activating apoptotic pathways and inducing G2/M phase arrest.

This study has some limitations. This study was performed with a single cell line in vitro and needs to be analyzed in other NSCLC cell lines. Moreover, comprehensive analysis of various signaling pathways is necessary to understand the modulation of other signaling pathways by Analgecine to enhance the antitumor response to IR.

In conclusion, this study demonstrates that Analgecine promotes the IR-induced antitumor response by inducing apoptosis, G2/M cell cycle arrest. We postulate that Analgescine has potential in clinical applications for lung cancer.

Human lung cancer cells (A549 and LLC) were purchased from the Cell Resource Center of the Chinese Academy of Sciences (Shanghai, People’s Republic of China). The A549 cells were cultured in complete RPMI-1640 medium, whereas the LLC cells were grown in Dulbecco’s modified Eagle’s medium (Corning, NY, USA) supplemented with 10% fetal bovine serum (Gibco, Grand Island, NY, USA) in a sterile incubator maintained at 37°C with 5% CO2.

Analgecine (1.2U/ml) was purchased from Vanworld Pharmaceutical Rugao (Jiangshu, China) and dissolved in sterilized phosphate-buffered saline (PBS; Corning, NY, USA) to generate a stock solution at a concentration of 0.12U/ml. The Analgecine dose was chosen based on the reported clinical dose [12].

Six- to eight-week-old female C57BL/6 mice were purchased from the Shanghai Experimental Animal Center and raised in pathogen-free conditions. All animal experiments were approved by the Institutional of Animal Care and Use Committee of Jinshan Hospital, Fudan University. The mice were subcutaneously injected with 5×106 LLC cells into the right flank. After tumors grew for two weeks, 32 tumor-bearing mice were randomly assigned to one of the 4 groups: (1) control group; (2) Analgecine group; (3) IR group; and (4) IR plus Analgecine (combination) group. Treatments were initiated two weeks after LLC cell implantation (day 1 treatment). The control group was injected with an equal volume of normal saline. The Analgecine and the combination group mice were administered Analgecine three days prior to IR. Each tumor was irradiated with 3Gy X-rays using a Trilogy linear accelerator (Varian Medical Systems, CA, USA) on five consecutive days starting on day 4, and Analgecine was injected 2h before IR in the combination group during the five days of IR. We continued to inject Analgecine after all IR sessions for three days. To assess tumor growth, tumor diameters were measured with calipers thrice every week. The tumor volume was calculated using the formula V= (A×B2)×0.5, where A is the longest dimension, B is the perpendicular dimension [25]. Similar treatment protocol was followed for survival analysis (8 mice per group).

TUNEL assay was performed on harvested xenograft tumors to analyze apoptosis. Tumors were fixed in 4% paraformaldehyde and embedded in paraffin. Then, TUNEL assay was performed on the tumor specimens according to instructions with the TUNEL assay kit (KeyGEN, Nanjing, China).Then, the specimens were incubated with 4',6-diamidino-2-phenylindole (DAPI; blue fluorescence) to stain nuclei. The green fluorescence represented TUNEL-positive cells, which were randomly counted in 10 low-power fields (100×) for each sample.

A549 cells (3×103) were seeded onto 96-well culture plates and grown overnight. After all treatments, the CCK-8 assay (Dojindo, Kumamoto, Japan) was performed according to the manufacturer’s protocol. The plates were incubated for 1-4h and then the absorbance was measured at 450 nm in a plate reader ((BioTek Epoch, Winooski, VT, USA).

A549 cells were seeded in 6-well plates. After 24 hours, the cells in Analgecine and combination groups were treated with 0.12U/ml Analgecine. Then, the IR and combination groups were irradiated with X-ray doses ranging from 0 to 10Gy, and fresh medium was added immediately. The cells were then trypsinized, counted, and seeded (800 cells per well) for colony formation in 60-mm dishes. The cells were incubated for 10 to 14 days for colony formation. The colonies were fixed with 4% paraformaldehyde and stained with crystal violet. Colonies of ≥50 cells were considered clonogenic survivors. The data were analyzed with single-hit, multi-target models [26]. The radiobiological parameters were calculated such as D0 (the mean radiation dose induced 63% cells to death) , N(the extrapolation number) and sensitivity enhancement ratio(SER, SER=the control D0/ the treatment D0).

A549 cells were seeded into 6-well plates and treated with Analgecine alone or in combination with IR for 24h. Then, the cells were stained with the Annexin V/ propidium iodide (PI) kit (BD Biosciences,San Jose, CA, USA). Another set of cells were stained with a propidium iodide staining kit (BD Biosciences, San Jose, CA, USA) for cell cycle analysis. Both staining protocols were performed according to the manufacturer’s instructions. The flow cytometry assay was analyzed using the flow cytometer (Beckman, Miami, FL, USA). The experiments were performed in triplicate and repeated thrice.

Total RNA was extracted from all 4 treatment groups of A549 cells with the Axyprep Multisource Total RNA miniprep Kit (Axygen, Union City, CA, USA) and quantified. Then, 1μg RNA from all RNA samples was reverse transcribed into cDNA with the PrimeScript RT Master Mix (TaKaRa, Dalian, China). QPCR was performed with a SYBR Premix Ex Taq (Tli RNaseH Plus; TaKaRa) according to the manufacturer’s protocols in a Applied Biosystem 7300 (Applied Biosystems, Foster city, CA, USA). The target and control gene primers are shown in Supplementary Table 2. The target gene levels were normalized to β-Actin levels according to the ΔΔCT method.

The SPSS software version 23.0 (SPSS, Chicago, IL, USA) was used for the statistical analysis. The quantitative data were expressed as mean±SD. Survival curves were constructed with the Kaplan-Meier method and analyzed by log-rank test. When comparing two treatment groups, P values were assessed using 2-tailed unpaired Student’s t-tests. A P-value of less than 0.05 was considered significant.

The authors thank the members of their laboratory for helpful technical support.