Results: We demonstrate that PD-L1 expression is increased in erlotinib-resistant non-small cell lung cancer (NSCLC) cells with MET gene amplification. Targeted inhibition of MET significantly decreases both gene and protein expression of PD-L1. Further, we demonstrate that inhibiting MAPK also results in a significant decrease in PD-L1 expression. Taken together these results show that expression of PD-L1 in the erlotinib-resistant cell line is associated with MET activity, and the downstream MAPK pathway.

Conclusions: Our results demonstrate that PD-L1 expression is increased in erlotinib resistant NSCLC cells with MET gene amplification and that the increase can be averted by targeted inhibition of MET.

Worldwide, lung cancer is one of the most frequent cancers and mortality is high. The vast majority of lung cancers are non-small cell lung cancers (NSCLC). Over the past decade several oncogenic drivers have been identified [1], though most distinct are the observations of activating mutations in the epidermal growth factor receptor (EGFR) of patients with adenocarcinoma histology. Today, treatment with EGFR-targeting tyrosine kinase inhibitors (TKIs), like gefitinib and erlotinib, is part of the routine treatment of patients harboring these mutations. This change in treatment has markedly increased the survival in this subgroup of patients [2], though treatment resistance is inescapable [3]. Several resistance mechanisms have been found and thoroughly described including the EGFR T790M mutation, MET proto-oncogene (MET) gene amplification, development of epithelial to mesenchymal transition (EMT), and transition to a small cell lung cancer (SCLC) phenotype [4].

Treatment of lung cancer with immunotherapy has gained much attention after promising clinical trials. Especially blockade of the pathway activated by the programmed death receptor 1 (PD-1) and its ligand PD-L1 is being massively investigated. PD-1 is expressed on the surface of T-cells, and upon activation by the ligand, PD-1 initiates inactivation of the cell [5]. Expression of PD-L1 on the surface of cancer cells leads to this inactivation of T-cells and helps the cancer cells achieve immune evasion [6]. The T-cell inactivating interaction can be inhibited by anti-PD-1 or anti-PD-L1 agents, and hereby anti-tumor immune activity can be restored [7, 8]. At present, no validated biomarker for response to PD-1-PD-L1 blockade has been presented [9], though studies suggest that expression of PD-L1 in tumor specimens could be a candidate biomarker [10, 11].

The aim of this study was to investigate expression of PD-L1 in erlotinib-resistant cells. The cells acquired resistance through MET gene amplification, and we further wanted to investigate if targeting the new oncogenic driver and the downstream proliferative pathway would affect the PD-L1 expression. 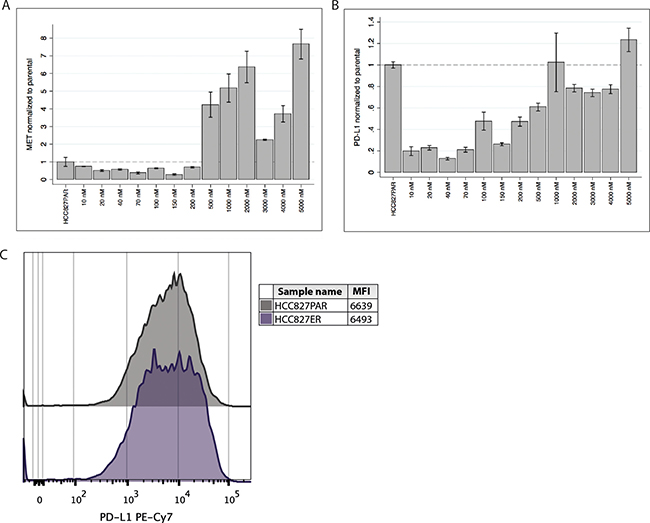 We used flow cytometry to investigate the expression of PD-L1 protein on the surface of the cells. As can be seen from Figure 1C, the median fluorescence intensity (MFI) and histograms were similar between the parental HCC827PAR and the HCC827ER cell line. These results corroborated the findings of increased PD-L1 gene expression.

PD-L1 expression was decreased in HCC827ER upon treatment with crizotinib

Previous studies indicate a general link between receptor tyrosine kinase (RTK) activity and expression of PD-L1 in erlotinib sensitive cells [16, 17, 22]. Our first results suggested that an association between increase in MET and PD-L1 gene expression was also present in erlotinib-resistant cells. We therefore wanted to investigate if inhibition of MET, using a MET-targeting TKI (crizotinib), affected the expression of PD-L1 in these cells.

The viability of HCC827ER cells following treatment with crizotinib has previously been determined [21]. We found that treatment with 0.1 and 1 μM crizotinib sustained reasonable viability, while sufficiently inhibiting phosphorylation of MET (Figure 2A). A decrease in total-MET was also observed, though not as distinct as the decrease in phospho-MET. Furthermore, the downstream phosphorylation of Akt and MAPK was also decreased by crizotinib (see Figure 2A). Treatment with both 0.1 and 1 μM crizotinib significantly decreased gene and protein expression of PD-L1 (Figure 2B) as measured by qPCR and flow cytometry. 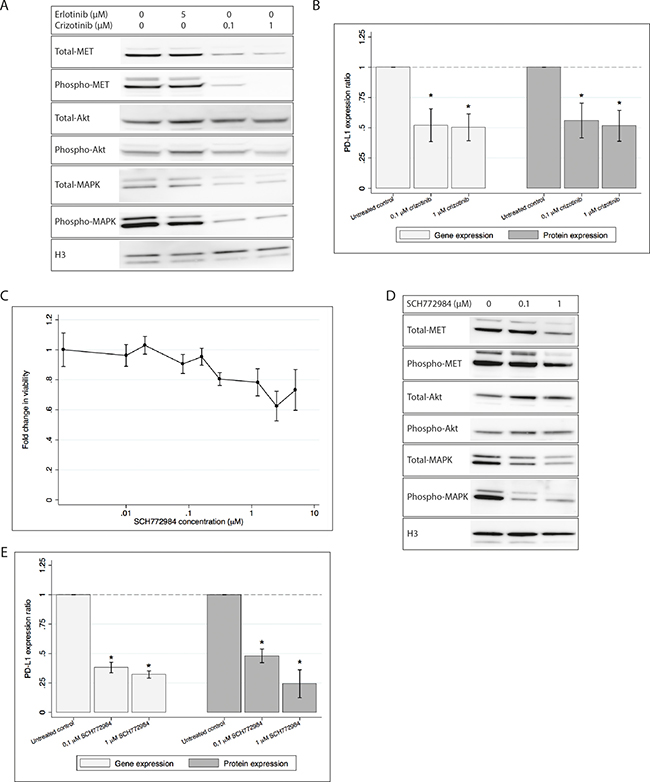 Since the MAPK pathway was activated by the MET gene amplification, and we saw that crizotinib inhibited phosphorylation of MAPK, we wanted to investigate if PD-L1 expression in HCC827ER was dependent on the MAPK pathway. Cells were treated with the MAPK inhibitor SCH772984. Cell viability was only mildly affected by the inhibitor at concentrations up to 5 μM (see Figure 2C). Different concentrations of SCH772984 were tested and we found that 0.1 and 1 μM SCH772984 was sufficient for decreasing MAPK activity (see Figure 2D). Total and activated Akt were stable or only weakly increased upon treatment.

These results indicated that inhibiting MAPK led to decreased levels of PD-L1.

The erlotinib resistant cell line can be divided into either MET-amplified or EMT subclones [21]. This polyclonality was also visualized in the flow cytometry histogram, where the HCC827ER cell line presented with a broad histogram and a tendency of two peaks, indicating clonal populations with either high or low expression of PD-L1 (Supplementary Figure 2).

We wanted to investigate how PD-L1 expression differed in these clonal subtypes. We measured PD-L1 gene expression in 14 sub clones derived from HCC827ER (Figure 3A). There was a clear distinction between the two clonal subtypes; MET-amplified clones generally presented with higher PD-L1 expression than the EMT clones. Further, we investigated the protein expression using flow cytometry on four of the 14 clones (two MET and two EMT clones, Figure 3B and 3C). The MET-amplified clones (clone 2 and 3) had a pronounced increase in PD-L1 protein expression as compared to the original HCC827ER cell line, while the opposite was the case for the EMT clones (clone 4 and 10). 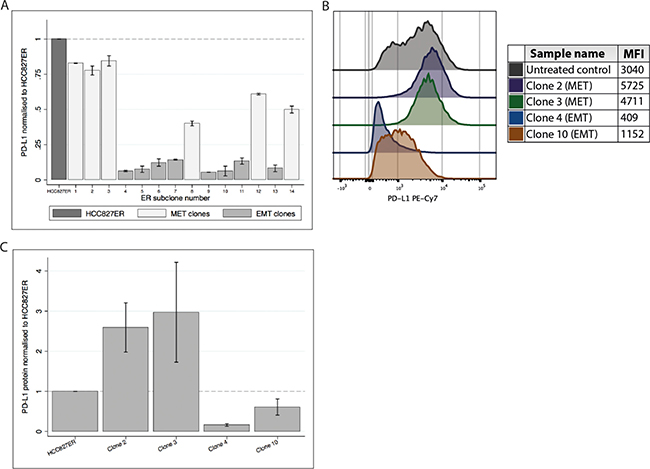 Figure 3: PD-L1 gene and protein expression in HCC827ER sub clones. (A) PD-L1 gene expression in the 14 clones (normalized to HCC827ER). Expression of PD-L1 is markedly higher in the MET clones compared to the EMT clones. (B) Representable histogram from a flow cytometry analysis of HCC827ER and four clones. MFI values are found in the table. (C) A bar graph showing the mean and SD of PD-L1 protein expression collected from three individual experiments.

These results further strengthened the hypothesis of a correlation between MET activity and increased PD-L1 expression, while PD-L1 expression seemed to be lowered in EMT clones.

Our results are in accordance with previous findings of RTK regulated PD-L1 expression and its involvement with MAPK [16–18, 22, 25]. Taken together, these studies indicate a general regulatory mechanism of RTKs through the MAPK pathway, and in some cases, through the PI3K/Akt pathway or a combination of the two [22, 26]. If PD-L1 expression is validated as a biomarker for PD1-PD-L1 axis blockade, this makes TKI-resistance mediated by activation of the MAPK or PI3K/Akt pathways (by-pass mechanisms) extraordinarily interesting in regard to immunotherapy, both when it comes to second line treatment of patients and the use of PD-L1 as biomarker of response. Jiang and coworkers have already presented data showing that BRAF inhibitor resistant melanoma cell lines increase the expression of PD-L1 using the PI3K-STAT3 pathway [27]. Further, a study comparing tumor PD-L1 expression in biopsies taken before initiation of gefitinib and at resistance found increased expression in 7 of 18 patients [20]. They also found that the increase in PD-L1 expression was associated with MET positivity (as measured by immunohistochemistry). The authors note that the number of patients included in this study is too low to make general conclusions, though in the context of ours and other studies, the biological evidence seems to back this clinical finding. However, for full disclosure on the biological mechanism, further studies are needed. In vitro RNAi studies and/or in vivo models should be used to investigate expression of PD-L1 in MET knock-out models to present evidence of MET-regulated PD-L1 expression. Furthermore, the biological effect of the increase in PD-L1 expression should be investigated in the presence of a functional immune system.

The data presented here suggest that erlotinib-resistant cells increase the expression of PD-L1 through a mechanism involving MET and MAPK activation. Treatment with MET inhibitors in relevant cases could possibly prevent PD-L1 expression and thereby immune evasion. Furthermore, the PD-L1 fluctuations observed here, urges clinicians to exercise caution when evaluating the use of immunotherapy after TKI-treatment, based on PD-L1 measurements on biopsies taken at the time of diagnosis.

The inhibitors erlotinib, crizotinib, and SCH772984 were all purchased from Selleckchem.

Five reference genes (β-actin, HMBS, GAPDH, YWHAZ and B2M) were tested and compared using the Normfinder Software [33]. Among these β-actin (ACTB) was found most stably expressed in the cell lines and was used as reference gene for the following experiments.

For the experiments presented the following primer sequences, concentrations and annealing temperatures were applied:

All graphs and statistics are produced in Stata 13 (StataCorp, 2013).

Gene and protein expression data from TKI experiments is collected from three individual setups. In each experiment data was normalised to an untreated control, and the mean of this normalised data is presented in graphs.

All data is presented as mean ± standard deviation (SD) (mean of biological triplicates). The two-tailed Student’s t-test was used to assess the difference between two groups, and p-values < 0.05 were considered significant.