Interferon regulator factor 4 (IRF4) is characterized to be a member of interferon regulatory family, which is predominantly expressed in bone marrow plasma cells of patients with multiple myeloma (MM). Recent studies indicated IRF4 is critical for T-help cells (Th17) differentiation and interleukin-17 (IL-17) secretion. Here, a total of 58 MM patients were enrolled in this study, the proportions of Th17 cells and T regulatory (Treg) cells in peripheral blood mononuclear cells (PBMCs) were determined by flow cytometric analysis. Immunohistochemistry was employed to detect the IRF4 expression in bone marrow. Herein, we observed a significant increase of IRF4 in bone marrow accompanied with a notable up-regulation of Th17 cells in PBMC within MM patients compared with healthy donors. Furthermore, the proportions of Th17 cells and serum IL-17 levels were higher in patients with stage III than stage I & II MM patients, and those parameters were positively correlated with the expression of IRF4 in these cases. These results for the first time indicate that a crosstalk between IRF4 and Th17 cells is associated with MM prognosis, and IRF4 may be served an important target for MM immunotherapy.

Interferon regulatory factor (IRF) belongs to the nuclear transcription factors, named by its regulation of interferon [3]. IRF families, including more than 10 members, are identified to have recognition of domain amino terminal of DNA with specific sequences and binding function. Functionally, IRF not only regulates cell response to interferon, but also plays a pivotal role in cell proliferation, apoptosis, oncogenic conversion susceptibility and T cell immune responses [3]. Multiple myeloma oncogene 1 (MUM1)/Interferon regulatory factor 4 (IRF4) is one of interferon regulatory factors, which has been shown to be an important transcription factor and is involved in the negative regulation of Th17 cells differentiation and the production of Th17-related cytokines, including IL-17, IL-21 and IL-22 [4, 5]. Mechanically, IRF4 may play a key role in the IL-21-mediated Th17 cells differentiation by influencing the balance of RORα, RORγ and Foxp3 [6]. In plasma cells, IRF4 is also known to be an important modulator for their differentiation [7]. Moreover, IL-1 drives the early differentiation of Th17 cells by regulating the expressions of IRF4 and RORγt [8]. Therefore, mounting evidence support that IRF4 plays a role in the differentiation of Th17 cells.

Th17 cells are recently identified to participate in bacterial infections, and numerous immunologic diseases [9]. The emblematic Th-1 or Th-2 lineages secrete IL-17 rather than IL-4 or IFN-γ [10]. A recent study indicated that IL-17 plays a critical role in the control of the phenotype switch from Th-1 to Th-17, and leads to lytic bone disease in MM [11].

Immunotherapy has emerged as a promising approach for MM treatment recently, but it still lacks targeted specifically and optimized drugs [12]. It is generally accepted that Th17 cells and its relevant cytokines are critical components in the autoimmunity. IRF4 is recognized as an important modulator for the differentiation of Th17 cells. Therefore, defining the relationship between IRF4 and Th17 cells may shed a light for the treatment of MM. 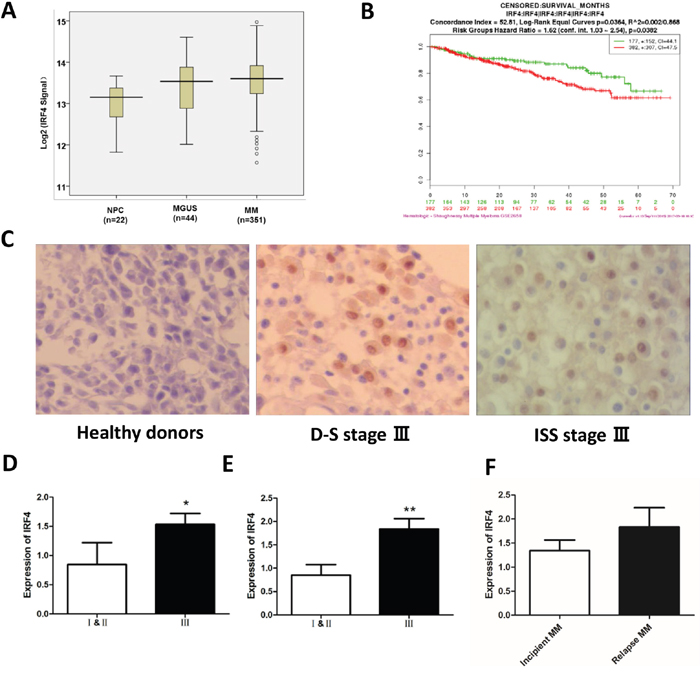 Proportion of Th17 cells is associated with the MM clinical stages 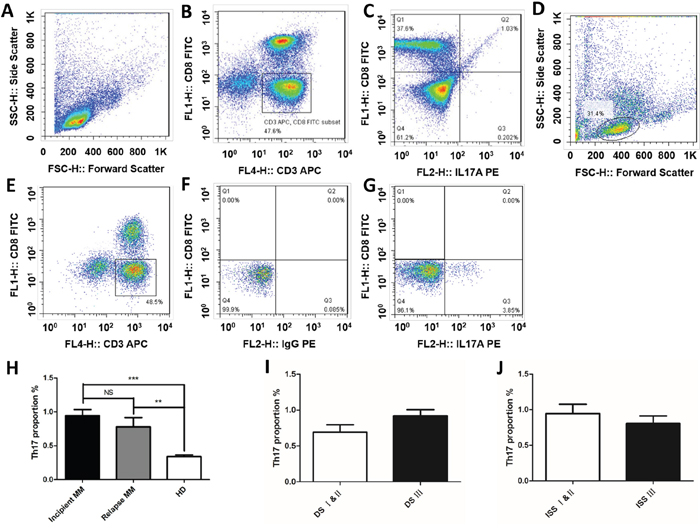 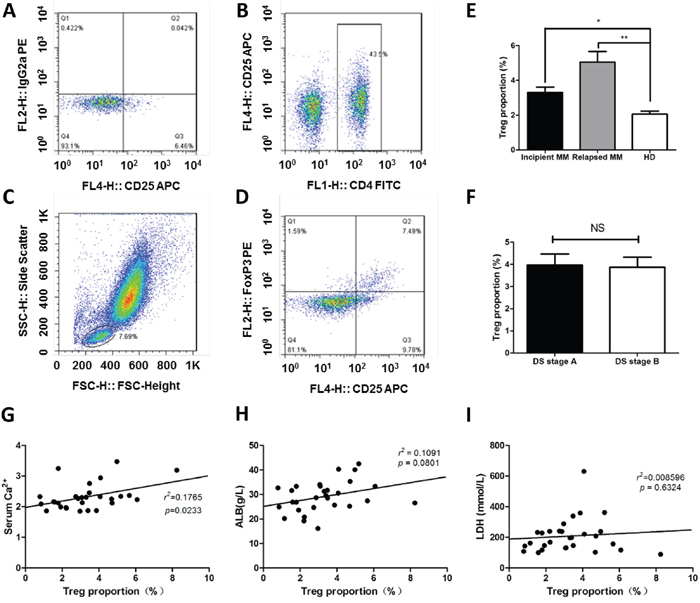 Abnormal cytogenetic is one of the important factors influencing the prognosis of MM, it involves in a series of changes in the bone marrow microenvironment for MM tumorigenesis and immune regulation. Many studies have reported that MM patients have an immunodeficiency, which is worth of further study to its clinical relevance [13]. The present study is focused on the correlation between Th17 cells and IRF4 in MM patients. The Th17 cell is a new type of CD4+ T helper cells, known to protect the body against fungi and parasitic infections and involved in autoimmune and the body's inflammatory response [13]. A previous study has found that Th17 cells proportion was associated with ISS stages, levels of LDH, and serum creatinine, indicating that Th17 cells proportion can be reduced after treatment [14]. However, our current study did not support this conclusion. Th17 cells proportion was not associated with ISS stages, levels of LDH, ALB, ESR and serum creatinine.

IL-17, one of the most important cytokines secreted by Th17 cells, is highly expressed in many cancers, and some autoimmune or infectious diseases [15, 16]. It was reported that the levels of IL-17 in incipient and relapsed MM patients were obviously higher than those in healthy donors, but there is no significant difference between incipient and relapsed MM patients. A significant increase in Th17/IL-17 expression in MM patients were presented, which could be due to the fact that the interactions between myeloma cells and bone marrow microenvironment. The increases of Th17/IL-17 are crucial in promoting tumorigenesis, drug resistance, angiogenesis, and bone destruction through secretion of adhesion molecules and cytokines with these malignancy cells. Previous studies also showed that the IL-17 level was high in MM patients, which is closely related to bone lesions and tumor cell growth [17–19]. It has also been found that the serum TNF-α and VEGF in MM patients was significantly higher than healthy donors. TNF-α and VEGF are related to the levels of IL-17, which indicate that IL-17 may be involved in the progress of angiogenesis, and the progress of the disease [20]. Kim et al. found that gene polymorphisms in IL-17 and IL-17R were associated with the end-stage renal disease (ESRD), their study indicated that both IL17E rs10137082 and IL17RA rs4819554 are highly expressed in patients with ESRD, which revealed the relationship between IL-17 and kidney damage [21]. We also analyzed the correlation between the levels of IL-17 and clinical stages in 38 cases incipient MM patients, then we found that levels of IL-17 in the DS staging group A patients was lower than the patients in group B, instructing the correlation between renal damage and elevated levels of IL-17 in patients. Consistent with previous reports, we revealed that the relationship between Th17/IL-17 and disease stage, and speculated that the mechanisms of immune disorders and inflammatory reaction in the course of the MM, nevertheless further study need to expand the sample size and ascertain the critical role of Th17/IL-17 as a prognostic maker for MM.

Our findings illustrated that the levels of MUM1/IRF4, Th17 and IL-17 are increased in MM patients, and related with the stage of disease. The peripheral blood Th17 cells numbers and the serum levels of IL-17 were positively related to the intensity of MUM1/IRF4 expression. These results raised the possibility that MUM1/IRF4 acts as an effector in MM by promoting Th17 amplification and IL-17 secretion.

58 MM patients were collected from January 2012 to March 2014 in the First Affiliated Hospital of Nanjing Medical University, diagnosis were conformed to the 2008 World Health Organization (WHO) criteria, and curative effect standard was approved by the International Working Group the curative effect of standard. The subjects were divided into incipient (38 cases) and relapsed (20 cases) groups. A total of 38 of the subjects were male, 20 of them were female, with median onset age of 58.2 years (40 ~ 80 years). The patients were also classified depending on the types of M protein secretion. IgG isotype was present in 41.3% (24/58), whereas 18.9% (11/58) of them had IgA, 1.7% (1/58) had IgD, κ light chain type 12.0% (7/58), λ light chain type 20.6% (12/58) and non-secretion 5.1% (3/58). According to the Durie-Salmon (D-S) staging system, 4 patients had stage I, 9 had stage II, and 45 had stage III. According to International staging system (ISS), 7 had stage I, 23 had stage II, and 28 had stage III. The healthy controls were classified into two groups, including 12 cases of male, 8 cases of female; the average age was 54, with no history of autoimmune disease, tumor, or recent infection. The selection of treatment regime for primary induction therapy was based on MM patients’ characteristic, such as the risk of toxicity, the patients’ intension, and the capacity of patients to tolerate drugs. 43.1% (25/58) patients were treated with bortezomib-based regimen, 56.8% (33/58) patients were treated with thalidomide-based regimen.

Ficoll was utilized to diluteperipheral blood in a 15 mL conical tube and centrifuged at room temperature, then we collected the mononuclear cells from the plasma/Ficoll interface into a new sterile conical tube, raised the cells with RPMI-1640 memdium (20%FBS+ Leukocyte Activation Cocktail). Next, the percentages of Th17 cells were identified and counted by anti-CD3, and anti-CD8 antibodies. PBMC from MM patients were first washed by PBS for twice and then put with anti-CD3 APC and anti-CD8 FITC mAb (BD Biosciences, USA) for 15 minutes at room temperature. After washings with PBS/BSA, the percentages of positive cells were calculated by FACSCalibur (BD Biosciences, USA).

Measurement of cytokines by ELISA

The serum was separated and stored at -80°C until assayed. The levels of IL-17 were detected using an ELISA (R&D system, USA) kit according to the manufacturer’s recommendations. IL-17 was detected using IL-17 antibody and quantified at 450 nm with a reference wavelength of 655 nm. Each sample was analyzed in duplicate, performed three independent experiments.

The BM tissues were harvested and fixed in 10% formaldehyde, and antigen retrieval was performed in EDTA-containing antigen retrieval buffer (pH = 8.0) in 95°C followed by 3 % H2O2 incubation for 30 min. After blocking by goat serum for 10 min, Anti-IRF4 (Novocastra, UK) monoclonal antibody was incubated over night at 4°C, the secondary antibodies were incubated for 30 min at room temperature before visualization by DAB reagent. The intensity standards were: pain 0 point; shallow yellow: 1 point; pale yellow: 2 point; sepia: 3 point. Calculate the products of stain intensity and positive cell quantities, results are determined with principle as follows: 0~3 points is ( - ), 4~5 points is ( + ), 6~9 points is ( ++ ), 10~12 points is ( +++ ).

This study was supported by Natural Science Foundation of China (NSFC 81372540).