Background: The HAS-BLED and ORBIT scores have been proposed to assess bleeding risk in anticoagulated atrial fibrillation patients. We performed a systematic review and meta-analysis to compare the predictive ability by using these two scores.

Materials and Methods: We searched the Cochrane Library, Elsevier and PubMed databases for related studies. Statistical analysis was performed with Revman 5.3 Manager software. We chose the C-statistic to reflect the diagnostic value.

Oral anticoagulants (OAC) are the cornerstones of atrial fibrillation (AF) management for preventing of stroke, thromboembolic events and mortality [1–3]. Bleeding is the major downside of OAC therapy [4, 5].

Of the various published bleeding risk scores, the HAS-BLED score (hypertension, abnormal renal/liver function, stroke, bleeding history or predisposition, labile international normalized ratio [INR], elderly [age ≥ 65 years], and drugs/alcohol concomitantly) has received widespread attention since it was first proposed in 2010 [7]. In 2015, O’Brien et al. derived and validated a simple score, ORBIT [8] (older [age ≥ 74 years], reduced hemoglobin/hematocrit/history of anemia, bleeding history, insufficient kidney function, and treatment with antiplatelet), which could be adapted to both VKA and non-VKA users. The ORBIT score was derived from the ORBIT-AF registry [9], with 10,098 AF patients taking warfarin and dabigatran, and validated in the ROCKET-AF trial population (treated with warfarin or rivaroxaban) [8]. According to the ORBIT score, AF patients were categorized as ‘low’, ‘intermediate’, and ‘high’ risk, based on score points ‘0-2’, ‘3’, and ‘≥ 4’, respectively. Table 1 summarises the components of the HAS-BLED and ORBIT scores.

Table 1: The risk predictors and risk stratifications of bleeding scores

Given the recent interest in the ORBIT score, we performed a systematic review and meta-analysis to compare the predictive ability of bleeding risks using the ORBIT and HAS-BLED scores.

We selected studies according to the following inclusion criteria: 1) Types of studies: prospective or retrospective studies reporting the HAS-BLED and ORBIT scores for predicting the bleeding risk; 2) Participants: non-valvular AF patients with VKA and non-VKA anticoagulants; and 3) Outcomes: major bleeding was defined based on the 2005 International Society on Thrombosis and Haemostasis [ISTH] criteria [8]. (i) fatal bleeding and/or (ii) symptomatic bleeding in a critical area or organ (intracranial, intraspinal, intraocular, retroperitoneal, intra-articular or pericardial, or intramuscular with compartment syndrome), and/or (iii) bleeding causing a decrease in the hemoglobin level of 20 g L−1 or more or leading to the transfusion of two or more units of whole blood or red cells.

Studies with insufficient data, not published in English, certain publication types (e.g., conference abstracts, letters, comments, case reports, and reviews) were excluded from this meta-analysis. For those duplicated studies, studies with the longest follow-up or largest sample size were included.

We systematically searched the Cochrane Library, Elsevier and PubMed electronic databases for studies reporting the HAS-BLED and ORBIT scores for predicting the bleeding risk. The included studies were published from January 2010 to June 2017 because the HAS-BLED score was first proposed in 2010 [7] and the ORBIT score was developed in 2015 [8]. Search terms included ‘atrial fibrillation’, ‘ORBIT’, ‘HAS-BLED’, ‘anticoagulation’ and ‘major bleeding’. We did not find other studies in the manual search.

Included studies were selected by two reviewers based on the search terms. The studies were prescreened by C.W., who read the titles and abstracts. The second round of selection involved the complete and careful review of articles by Y.Y., to confirm whether those studies described the bleeding events at each point or each stratification of the HAS-BLED and ORBIT scores. Discrepancies were resolved through discussion or consultation with a third reviewer (K.H.).

The Newcastle–Ottawa scale [17] was used to evaluate the quality of all included studies. It contains three parts: cohort selection, cohort comparability, and outcome assessment. Two authors independently assessed both the risk of bias and the quality of the seven studies in our meta-analysis.

We used Review Manager Version 5.3 (Copenhagen, The Nordic Cochrane Centre, The Cochrane Collaboration, 2014) to analyze the data. Receiver operating characteristic curve (ROC) analysis, expressed by the C-statistic [95% confidence intervals (CIs)] of continuous variables, was applied to evaluate the diagnostic performance in the HAS-BLED and ORBIT scores [18–21]. The Z-statistic

was used to assess the difference between these two scores. I2 values ≤ 25%, 25% to ≤ 50%, and > 50% represented 'low', 'intermediate' and 'high' heterogeneity, respectively. When I2 values > 50%, a random-effects model was selected [22]. Both the HAS-BLED and ORBIT scores were divided into three risk stratifications. HAS-BLED = 0–1 and ORBIT = 0–2 were considered as low risk; HAS-BLED = 2 and ORBIT = 3 were defined as intermediate risk; and HAS-BLED ≥ 3 and ORBIT ≥ 4 were regarded as high risk (Table 1). Odds ratios (ORs) with their 95% CIs were chosen to compare the predictive value between these two scores. In addition, calibration analysis was used to assess the predictive accuracy of risk scores. The first published study reporting the ORBIT was a predictive model providing the adjusted bleeding rate (events/100 patient-years) across three risk classifications (low, 2.4%; intermediate, 4.7%; and high, 8.1%). Then, we calculated the predicted number of major bleeding events in the subsequent validated studies. The observed number of major bleeding events was collected from all the included studies. OR > 1 represented over-prediction, while OR < 1 represented under-prediction.

Description of the included studies and patients’ characteristics

A total of 114 studies were initially identified by the above-mentioned search strategies (42 in Elsevier, 32 in Cochrane Library, and 40 in PubMed). After reading the titles and abstracts, we excluded 69 studies. Next, 24 studies were removed because the studies did not relate to the bleeding events or the selected risk scores (ORBIT or HAS-BLED). Finally, 7 identified studies met our criteria [8, 10–15], and the others were excluded as follows: (i) Certain publication types with no data (n = 3); (ii) Duplicate data without follow-up (n = 4); (iii) Studies not published in English (n = 2); and (iv) Only one risk score (ORBIT or HAS-BLED) used to evaluate bleeding risk (n = 5) (Figure 1). 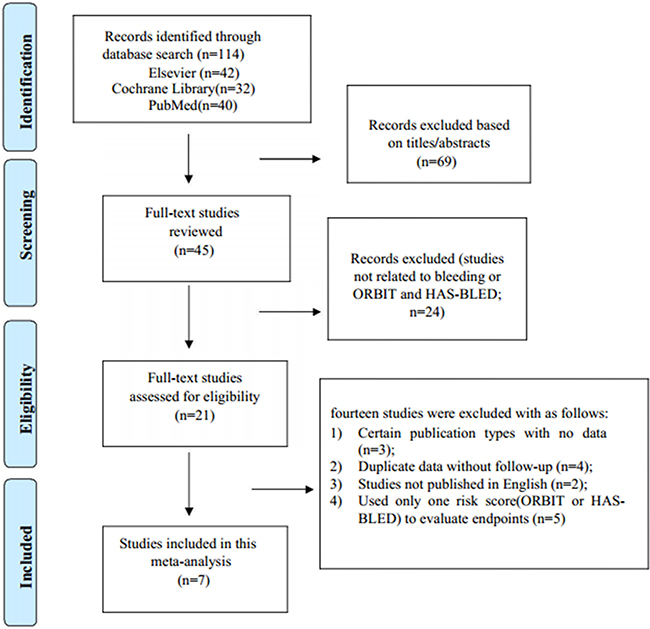 The participants of our seven included studies come from American, British, Spanish and Netherlands. [8, 10–15] (Table 2). We selected 8079 non-valvular AF patients with anticoagulant therapy (e.g., warfarin, apixaban, dabigatran and rivaroxaban) for further analyses and 348 of them had suffered from major bleeding finally. The 2005 ISTH criteria was used to define the major bleeding in our included studies. Furthermore, the quality of all included studies were evaluated by the Newcastle–Ottawa Scale. Eight or nine stars represented the high quality of these studies (Supplementary Table 1).

Discrimination analysis between the ORBIT and HAS-BLED scores

The first original article derived and validated the ORBIT score in the ORBIT-AF registry cohort and ROCKET-AF clinical trial populations [8]. The study by Proietti et al. did not provide the C-statistic [10]. Thus, there were a total of seven C-statistics of continuous variables for major bleeding in our 7 selected studies. Four showed that the ORBIT score had a higher C-statistic than the HAS-BLED [8, 12, 14]. The C-statistics ranged from 0.58 to 0.74 (median 0.62) for the ORBIT and from 0.59 to 0.68 (median 0.63) for the HAS-BLED, indicating that both scores had a modest predictive value for bleeding risk. 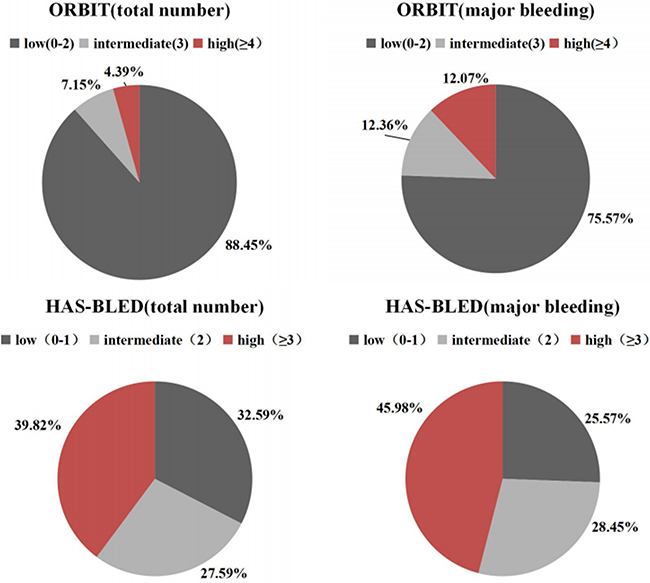 Figure 2: Population distribution in three strata for the ORBIT and HAS-BLED scores. 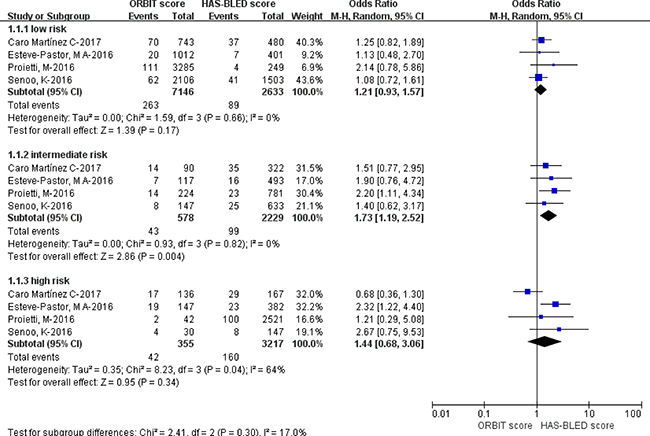 Calibration analysis of the ORBIT score 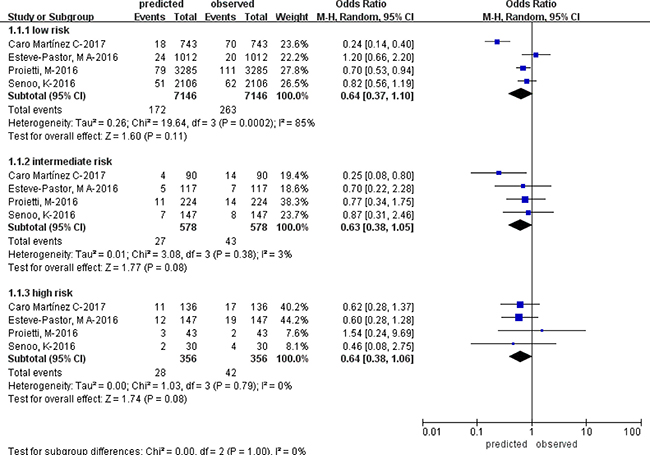 The ORBIT score under-predicted risk in low, intermediate and high strata, although there were no differences between the observed and predicted events in the three risk stratifications.

Based on our pooled C-statistic of continuous variables, both the ORBIT and HAS-BLED scores had a modest discriminatory capacity for predicting major bleeding risks. Although our pooled analysis showed that the ORBIT score had an elevated risk of major bleeding in all the three risk strata when compared with HAS-BLED, the P > 0.05 represented no significant differences in low and high stratifications. Compared with the HAS-BLED, more anticoagulated AF patients and major bleeding events were categorized as low risk when using ORBIT. Moreover, the ORBIT score under-predicted risk in all the three strata, but the p value > 0.05 represented that the ORBIT score was an adequate model calibration in predicting bleeding events.

Adding time in therapeutic range to the ORBIT scores

Nonetheless, a C-statistic cannot correctly and adequately assess the diagnostic ability, and other parameters must be added [25]. The net reclassification improvement (NRI) is a metric that helps us to understand the improvement between event and non-event categories. When a choice of care is presented above or below the given cut-off, the NRI value is better than the C-statistic when evaluating the predictive ability [25, 26]. Three included studies in our meta-analysis used the NRI. For example, Abumuaileq et al. [14] and Proietti et al. [10] found that the ORBIT score reclassified −1.85% and −0.77% of the population for major bleeding (p = 0.9 and 0.392, respectively) when compared with the HAS-BLED. Senoo et al. [13] reported a positive reclassification for any clinically relevant bleeding (NRI: +15.6%, p = 0.007) with the HAS-BLED score when compared with the ORBIT. A significant positive NRI value indicated that the HAS-BLED score performed better than the ORBIT in predicting bleeding events. It was not possible to complete a pooled analysis because of the limited NRI data.

Since the HAS-BLED score was first described in 2010, it has been validated in various populations, including AF and non-AF cohorts and various drug treatments (e.g., aspirin, VKA [27] and non-VKA anticoagulants [28–30]) and no antithrombotic therapy cohorts. The HAS-BLED score performs better than other scores in predicting major bleeding and ICH in an Asian/Chinese AF population [31]. For the ORBIT score, O’Brien and colleagues chose the five strongest predictors from a full continuous ORBIT bleeding model, which included numerous independent predictors of major bleeding [8]. In our pooled analysis, we found that this new score categorized more anticoagulated AF patients and major bleeding events as low risk when compared with the HAS-BLED score. And in clinical practice, the physician always pay more attention to the ‘high risk’ anticoagulated AF patients, they might timely adjust the dose of anticoagulant or even discontinue anticoagulant for the patients. In contrast, the ‘low risk’ anticoagulated AF patients might get less attention. Unfortunately, the ORBIT score did not meet expectations for evaluating bleeding risks, and several studies have found that the ORBIT only shows a modest or even worse predictive ability when compared with other existing scores [10–15].

Several evident limitations are in our meta-analysis. First, heterogeneity always exists in three main forms: clinical, methodological and statistical [32], and the inconsistency might have derived from the limited amount of data, variety in study designs and the various types of anticoagulants used (e.g., warfarin, dabigatran, rivaroxaban, and apixaban ). Second, the types of included studies were prospective or retrospective studies, and large prospective studies are necessary to validate our findings.

Hong-K was responsible for the entire project, and Lip G Y revised the draft. Wang-C and Yu-Y performed the systematic literature review and drafted the first version of the manuscript. All authors took part in the interpretation of the results and prepared the final version.

No conflicts of interest exist.

The authors wish to acknowledge support from the National Natural Science Foundation of China [81530013] and the National Basic Research Program of China [973 Program: 2013CB531100].