Arsenic, a well-known human carcinogen, has been reported to induce hepatic oxidative stress and hepatic injury. Eriodictyol, a flavonoid found in citrus fruits, has been reported to have antioxidant effects. In this study, we aimed to investigate the protective effects of eriodictyol on arsenic trioxide (As2O3)-induced liver injury and to clarify the molecular mechanism. Male Wistar rats were administrated 3mg/kg As2O3 intravenous injection at days 1, 4, 5, and 7. Eriodictyol was given 1 h before or after As2O3 treatment. The results showed that eriodictyol prevented As2O3-induced liver reactive oxygen species (ROS) and malonaldehyde (MDA) levels. Eriodictyol abrogated As2O3-induced decrease of the antioxidant enzymes superoxide dismutase (SOD), glutathione peroxidase (GPX), and catalase (CAT) activity. Eriodictyol also attenuated As2O3-induced hepatic pathological damage. In addition, eriodictyol promoted the expression of nuclear factor erythroid 2 p45 related factor 2 (Nrf2) and heme oxygenase-1 (HO-1) up-regulated by As2O3. In conclusion, our results demonstrated that eriodictyol exhibited a protective effect on As2O3-induced liver injury and the possible mechanism is involved in activating Nrf2 signaling pathway.

Eriodictyol, a flavonoid found in citrus fruits, has been reported to have anti-inflammatory, anti-apoptotic, and antioxidant effects. Eriodictyol has been reported to prevent early retinal and plasma abnormalities in streptozotocin-induced diabetic rats [9]. Eriodictyol also protected against hydrogen peroxide-induced neurotoxicity in cultured rat pheochromocytoma cells [10]. Furthermore, eriodictyol was found to exhibit antioxidant effect on UV-induced apoptosis in keratinocytes [11]. However, the protective effects and molecular mechanism of eriodictyol on arsenic trioxide-induced liver injury remain unclear. In this study, we sought to determine whether eriodictyol had protective effects on arsenic trioxide-induced liver injury in rats. 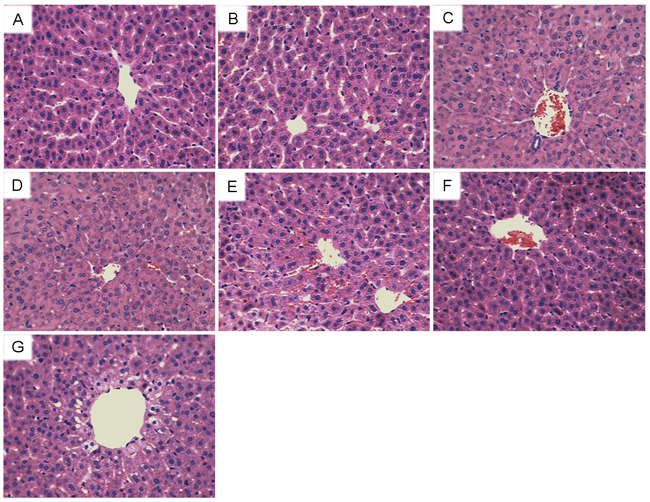 Effects of eriodictyol on ROS and MDA levels in liver tissues 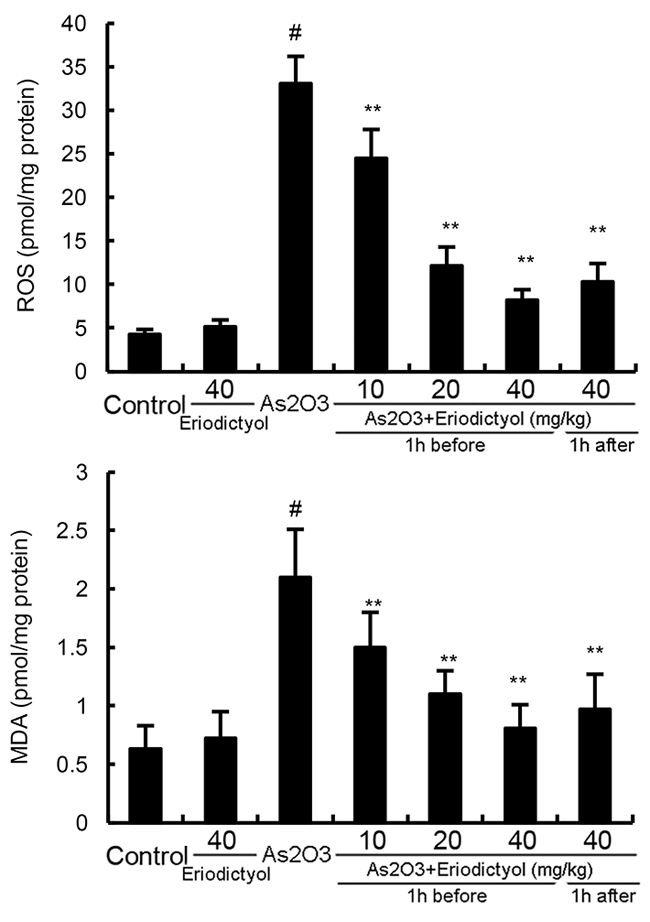 Effects of eriodictyol on SOD, GPX, and CAT activity in liver tissues 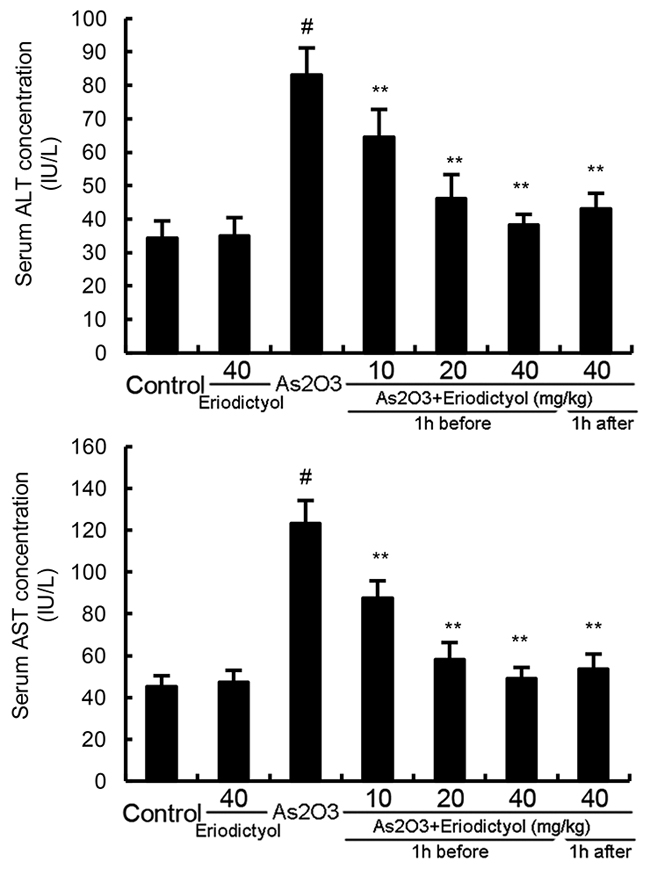 Eriodictyol promoted the expression of Nrf2 and HO-1 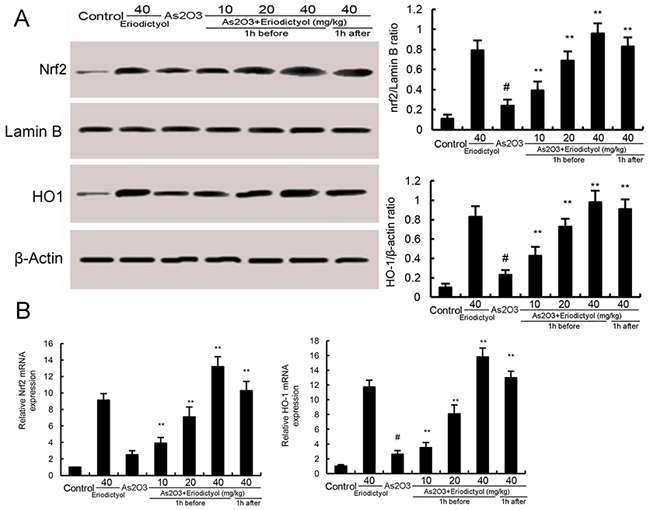 Arsenic has been known to induce liver oxidative stress and liver injury. Eriodictyol, a flavonoid found in citrus fruits, has been reported to have antioxidant effect. In this study, we found that eriodictyol attenuated As2O3-induced oxidant injury in liver tissues by activating Nrf2/HO-1 signaling pathway.

Arsenic exposure exhibits oxidative stress by inducing the production of ROS in liver tissues [18]. In the present study, we found that the production of ROS increased significantly after arsenic exposure. MDA, a significant lipid peroxidation product, increases in oxidative stress [19]. It can be used to monitor the oxidative damage [20]. The levels of MDA in liver tissues increased significantly after arsenic exposure. However, treatment of eriodictyol remarkably suppressed As2O3-induced MDA and ROS production. Furthermore, the inhibition of SOD, GPX, and CAT activity by As2O3 was reversed by eriodictyol. These results demonstrated that eriodictyol reduced As2O3-induced oxidative stress and liver damage. Nrf-2, a basic leucine zipper transcription factor, has been reported to play critical roles in orchestrating cellular antioxidant defenses [21]. Activation of Nrf-2 leads to the expression of HO-1, a cytoprotective enzyme important in heme catabolism [22]. Previous studies showed that Nrf-2 can be used as an effective molecular target to counteract As-induced toxicity [23]. In this study, we found that eriodictyol up-regulated the expression of Nrf2 and HO-1 induced by As2O3.

In conclusion, our results demonstrated that eriodictyol had a protective effect on As2O3-induced liver injury. The possible mechanism is involved in activating Nrf2/HO-1 signaling pathway. Eriodictyol has a potential application to treat arsenic-induced toxicity.

Male Wistar rats (8 week old) were purchased from the Center of Experimental Animals of Jilin University (Changchun, China). All animals were housed in microisolator cages and fed standard laboratory chow and water ad libitum. The environment temperature was 25 ± 2 °C and humidity was 55 ± 5%. All animal experiments were performed in accordance with the Health’s Guide for the Care and Use of Laboratory Animals published by the US National Institute of Health.

Eighty-four rats were randomly divided into seven groups: control group, Eriodictyol alone treated group, As2O3 group, As2O3 + eriodictyol (10, 20, 40mg/kg, 1 h before) treated groups, and As2O3 + eriodictyol (40mg/kg, 1 h after) treated group. Male Wistar rats were administrated 3mg/kg As2O3 intravenous injection at days 1, 4, 5, and 7. Eriodictyol was given by an intraperitoneal injection 1 h before or after As2O3 treatment. Control rats were treated with equal amount of 0.9% normal saline as a vehicle control. On the 8th day, the rats were killed and the blood samples and livers were collected.

To evaluate the changes of liver issues, the livers were obtained and fixed in 10% neutral buffered formalin overnight. The the tissues were dehydrated, paraffin embedded and sliced. The sections were stained with hematoxylin and eosin (H&E) stain. Finally, the pathological changes of liver tissues were observed under a light microscope.

Liver tissues were homogenized and the levels of MDA, the antioxidant enzymes GPX, SOD, and CAT in liver tissues were tested by commercial kits (Jiancheng Bioengineering Institute of Nanjing, China) according to the manufacturer’s instructions.

Measurement of ALT an AST

24 h after the last time of As2O3 treatment, the blood samples were collected and centrifuged at 3000 g for 8 min to obtain the serum. Serum ALT and AST levels were measured by commercial kits (Jiancheng Bioengineering Institute of Nanjing, China) according to the manufacturer’s instructions.

Liver tissues were homogenized in liquid nitrogen and incubated in lysis buffer containing protease and phosphatase inhibitors (Roche, Basel, Switzerland) to obtain protein. The protein concentration was determined through BCA kits. Equal amounts of protein were separated by 12% SDS-PAGE gel and electrotransferred to a nitrocellulose membrane. The membrane was incubated with the primary antibodies Nrf-2 (1: 1000), HO-1 (1: 1000) at 4 °C overnight and then probed with HRP-conjugated secondary antibody at room temperature for 2 h. The immunoreactive proteins were detected using an enhanced chemiluminescence Western blotting detection kit.

Data are presented as the mean±SEM. Comparisons between groups were analyzed using one-way ANOVA (Dunnett’s t-test) and two tailed Student’s t-test. The P< 0.05 or P< 0.01 were considered statistically significant.

This study was supported by grants from the National Natural Science Foundation of China (No. 31672616).