Long noncoding RNAs (lncRNA) have been implicated in variety human cancer but their mechanisms of function are mainly undocumented. In the present study, we investigated lncRNAs alteration that contributed to colorectal cancer (CRC) by utilizing TCGA RNA sequencing data and other publicly available lncRNAs expression profiling data. Here, We screened out the CRC–associated lncRNA LL22NC03-N64E9.1, a key regulator of CRC development and progression. We also revealed that knockdown of LL22NC03-N64E9.1 inhibited cell proliferation, colony formation, tumorigenicity and apoptosis promotion, both in vitro and in vivo. Mechanistically, LL22NC03-N64E9.1 repressed underlying target gene KLF2 transcription through binding to EZH2. Furthermore, rescue experiments revealed that LL22NC03-N64E9.1 oncogenic function may partially depend on repressing KLF2. Taken together, our results suggested that LL22NC03-N64E9.1 confered an oncogenic function in human CRC and may serve as a candidate prognostic biomarker and target for new therapies in this deadly disease.

Colorectal cancer (CRC), one of the most common types of malignant worldwide, is the second leading cause of cancer-related mortality in the Western countries [1, 2]. Almost 90% of CRC patients can be cured if detected at an early stage. Unfortunately, patients with CRC are very often diagnosed at advanced stages with poor prognosis [3, 4]. Generally, the tumorigenicity of CRC is a multistep process involving a number of genetic or epigenetic alterations that eventually result in malignant transformation of CRC cells [5, 6]. Therefore, better understanding of the molecular mechanisms involved in the development and progression of CRC is essential for the development of diagnostic bio-markers and potential therapeutic targets for CRC patients [7].

Over the past decade, complement of human genome sequencing and GENCODE project has showed that only about 2% of human genome are protein coding genes, while the major of the rest is non-coding genes yielding lots of non-coding transcripts including miRNAs, circular RNA and long non-coding RNAs (lncRNAs) [8]. Among these, lncRNAs represent a group of non-coding RNAs of more than 200 nucleotides in length and have no protein-coding capacity [9]. Recently, accumulating evidence revealed that a subset of these non-coding RNAs are functional and they have myriad molecular functions through many cellular pathways and processes, including oncogenic or tumor suppress signaling [10]. For instance, lncRNA HOXA11-AS is highly expressed in gastric cancer, promoting cell proliferation and invasion via scaffolding the chromatin modification factors PRC2, LSD1 and DNMT1 [11]. We previously found that HOTTIP promotes CRC cell proliferation partly via down-regualtion of p21 expression, while IRAIN could promote pancreatic cancer cell growth by binding to histone demethylase lysine-specific demethylase 1 (LSD1) and enhancer of zeste homolog 2 (EZH2) [12, 13]. Therefore, there is a closely link between lncRNAs and cancer.

KLF2 is one of the key members in the Kruppel-like factor (KLF) family due to its tumor suppressor function in malignancies such as breast cancer, non-small cell lung cancer, prostate cancer and leukemia [14–18]. It was reported that KLF2 could inhibit tumor cell proliferation mediated by KRAS [18]. Moreover, previous study showed that EZH2 could directly bind to KLF2 promoterto silence KLF2 expression, resulting in the block of the tumor-suppressor features of KLF2 [19].

In our present study, we analyzed TCGA colorectal cancer and normal tissue RNA sequencing data and two independent microarray data sets from Gene Expression Omnibus and identified a novel CRC-associated lncRNA LL22NC03-N64E9.1. The LL22NC03-N64E9.1 gene is located at chromosomal locus 22q11.1 and transcribes a 1388nt transcript. By binding to EZH2, a core component of the polycomb repressive complex 2 (PRC2), LL22NC03-N64E9.1 epigenetically suppressed KLF2 expression via histone modification. The silence of LL22NC03-N64E9.1 induced CRC cell cycle arrest and significantly inhibited tumor growth both in vivo and in vitro. Our results indicated that LL22NC03-N64E9.1 may serve as a candidate target for new therapies in human colorectal cancer.

LL22NC03-N64E9.1 is upregulated in human CRC tissues and is positively correlated with larger tumor size and advanced TNM stage 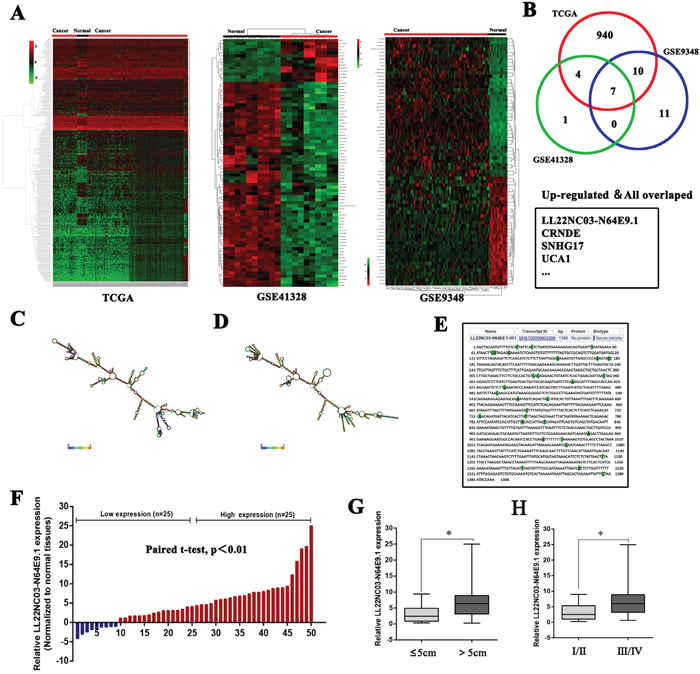 Table 1: Correlation between LL22NC03-N64E9.1 expression and clinicopathologic characteristics of patients with CRC.(n=50) 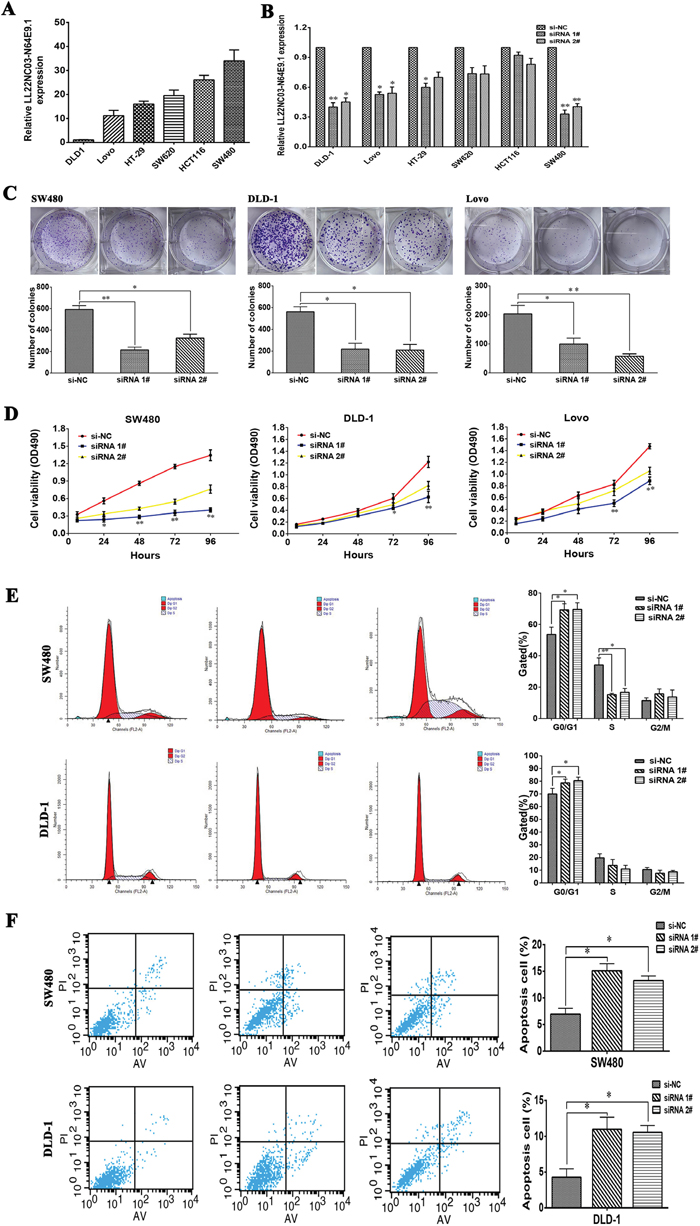 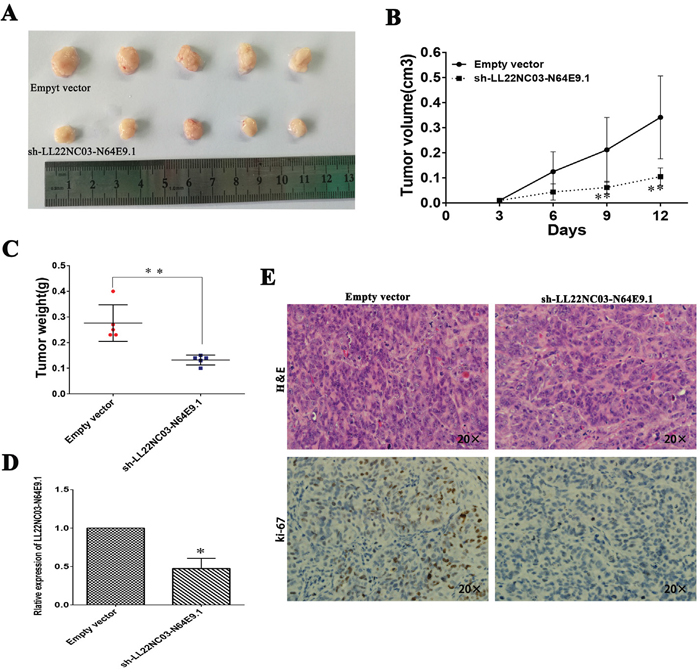 Figure 3: The silencing of LL22NC03-N64E9.1 inhibited CRC growth in vivo. (A) The stable LL22NC03-N64E9.1 knockdown SW480 cells were used for the in vivo study. The nude mice carrying tumors from respective groups were shown. (B) Tumor volumes were calculated after injection every 3 days. (C) Tumor weights from two groups are represented. (D) qRT-PCR was performed to detect the average expression of LL22NC03-N64E9.1 in xenograft tumors (n = 5). (E) Images of HE staining and immunohistochemistry of the xenograft tumors. Representative Ki-67 protein levels in xenograft tumors as evaluated by IHC. Representative images and data based on three independent experiments. Bars: s.d, *P<0.05, **P<0.01. 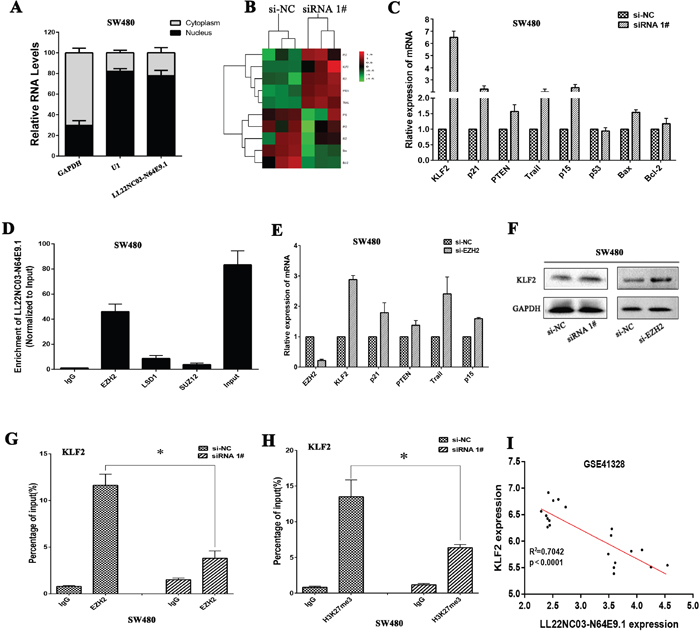 Silence of KLF2 is partly involved in the oncogenic function of LL22NC03-N64E9.1 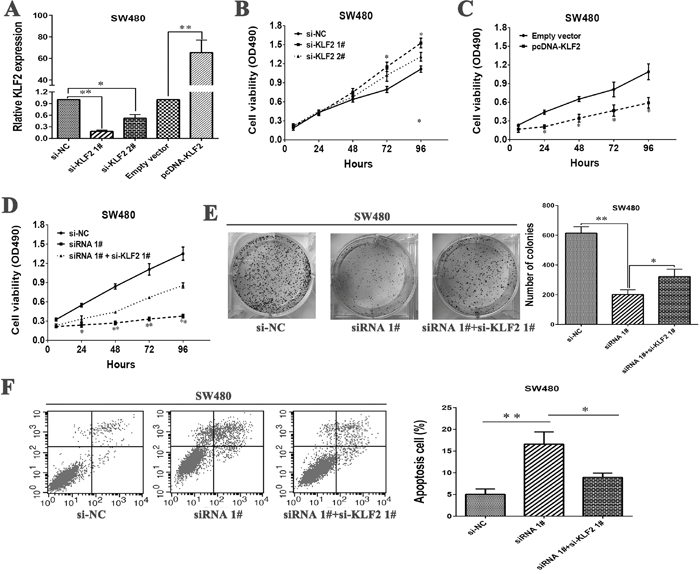 Recent findings have suggested that many lncRNAs have important biological roles in CRC, such as CASC2 [25], UCA1 [26], CCAT2 [27] and HOTAIR [28] et al. Our previous work also identified that lncRNA Loc554202 induces CRC cell apoptosis through the activation of specific caspase cleavage cascades [29]. Therefore, identification of CRC-associated lncRNAs may provide a missing piece of the oncogenic and tumor suppressor network puzzle. In this study, we compared the lncRNA profiles of CRC and normal tissues using the sequencing data from TCGA project and microarray profile from GEO. We screened out a novel lncRNA, LL22NC03-N64E9.1, whose expression significantly increased. Next, we found that the expression of LL22NC03-N64E9.1 was upregulated in an cohort of 50 pair human CRC tissues compared with that in the corresponding normal tissues and correlated with CRC progression, although further studies with increased CRC tissue sample sizes and better patient characteristics are needed.

It has been shown that lncRNAs play an important roles in regulating the malignant phenotypes of cancer cells [30, 31]. Our data also showed that LL22NC03-N64E9.1 is capable of promoting CRC cell proliferation and inhibiting cell apoptosis. Generally, lncRNAs is involved in regulation of cancer cells phenotypes by regulating target gene expression with different molecular mechanisms, including chromatin modification, genomic imprinting, RNA decay, sponging miRNAs and binding with RBP [21, 32]. Previous studies found that lncRNA XIST was upregulated in non small cell lung cancer (NSCLC) and could promote cancer cell proliferation and invasion. They also found that KLF2 was one direct target of XIST. Here, we found that LL22NC03-N64E9.1 could directly bind to EZH2, then repress downstream target gene KLF2 expression. KLF2, a key member of the Kruppel-like factor (KLF) family that with Cys2/His2 zinc-finger domains, which is reported to exert tumor suppressor functions in many malignancies, but its functional role in CRC remains unclear [33, 34]. In this study, we found that KLF2 also functions as tumor suppressors in CRC cells and knockdown of KLF2 is involved in the LL22NC03-N64E9.1-exerted oncogenic function in CRC cells. Meanwhile, correlation analysis in CRC tissues showed that LL22NC03-N64E9.1 expression is negatively associated with KLF2 expression. Notably, it is highly possible that LL22NC03-N64E9.1 could regulate a set of other target genes and RNA-sequencing following LL22NC03-N64E9.1 knockdown may help to identify the downstream targets of LL22NC03-N64E9.1.

In summary, this is the first study to show that L22NC03-N64E9.1 is upregulated in CRC tissues and its overexpression may be associated with CRC progression. L22NC03-N64E9.1 could promote CRC cell proliferation and tumorigenesis partly via epigenetically silencing KLF2 transcription by binding to EZH2. L22NC03-N64E9.1 may serve as a target for new therapies in CRC.

A total of 50 patients analyzed in this study underwent resection of the primary colorectal cancer at the Second Affiliated Hospital of Nanjing Medical University. All collected tissue samples were immediately snap frozen in liquid nitrogen and stored at −80°C before need. The study was approved by the Research Ethics Committee of Nanjing Medical University (Nanjing, Jiangsu, PR China), and written informed consent was obtained from all patients. The clinicopathological characteristics of the colorectal cancer patients are summarized in Table 1.

Total RNA was extracted from tissues or cultured cells using TRIzol reagent (Invitrogen, Carlsbad, CA, USA) according to the manufacturer’s protocol. RNA quantity and quality were determined by NanoDrop2000c (Thermo Scientific, Waltham, MA, USA). For qRT-PCR, 1 μg of RNA was reverse transcribed to cDNA using a Reverse Transcription Kit (Takara, Dalian, China). The quantitative polymerase chain reaction (qRT-PCR) assays were conducted on an ABI 7500. Data were normalized to the expression of glyceralde-hyde-3-phosphatedehydrogenase (GAPDH). Primers used for target amplification are listed in Supplementary Table 1.

Typically, CRC cells were seeded at six-well plates and then transfected in the next day with specific siRNA (100 nM) or control siRNA (100 nM) using Lipofectamine 2000 (Invitrogen), according to the manufacturer’s protocol (Invitrogen). After transfection, the cells were harvested for further studies. The primer sequences and siRNA sequences are summarized in Supplementary Table 1.

Cell viability was monitored using the Cell Proliferation Reagent Kit I (MTT; Roche Applied Science). The DLD-1, SW480 and Lovo cells were transfected with siRNA or si-NC (3000 cells/well) and were cultured in 96-well plates with six replicate wells. Cell viability was assessed according to the manufacturer’s recommendations. For the colony formation assay, a total of 500 cells were placed in a six-well plate and maintained in medium containing 10% FBS. The medium was replaced every 4 days. After 2 weeks, cells were fixed with methanol and stained with 0.1% crystal violet (SigmaAldrich). Visible colonies were manually counted. Triplicate wells were measured in each treatment group.

Four-week-old male athymic mice were purchased from the Animal Center of the Nanjing University (Nanjing, China) and maintained in pathogen-free conditions. SW480 cells were transfected with sh-LL22NC03-N64E9.1 or empty vector and harvested from six-well plates, washed with phosphate-buffered saline (PBS), and resuspended at 2 × 107 cells/mL. Subsequently, each mouse was injected into the lower right flank with 100 μL of suspended cells. Tumor growth was examined every 3 days, and tumor volumes were measured as the length×width2×0.5. At 12 days post-injection, mice were sacrificed by CO2 asphyxiation, and the growth of each tumor was examined.

The separation of nuclear and cytosolic fractions was performed using the PARIS Kit (Life Technologies) according to the manufacturer’s instructions.

RNA immunoprecipitation was used to investigate whether LL22NC03-N64E9.1 could interact or bind with the potential binding protein (EZH2, SUZ12 and LSD1.) in SW480 cells. We used the EZMagna RIP kit (Millipore, Billerica, MA, USA) following the manufacturer’s protocol. SW480 cells were lysed in complete RIP lysis buffer, and the extract was incubated with magnetic beads conjugated with antibodies that recognized EZH2, SUZ12, LSD1 or control IgG (millipore) for 6h at 4°C. Then, the beads were washed and incubated with Proteinase K to remove proteins. Finally, purified RNA was subjected to qRT-PCR analysis to demonstrate the presence of LL22NC03-N64E9.1 using specific primers.

Colorectal cancer cells were treated with formaldehyde and incubated for 10 mins to generate DNA-protein cross-links. Cell lysates were then sonicated to generate chromatin fragments of 200-300 bp and immunoprecipitated with H3K27me3, EZH2 and IgG as control. Precipitated chromatin DNA was recovered and analyzed by qRT-PCR. The primer sequences used for the studies are shown in Supplementary Table 1.

Xenograft tumor tissue samples were immunostained for H&E and Ki67. Anti-Ki67 was from Santa Cruz Biotechnology (Dallas, TX, USA). The IHC staining results were independently scored and compared by the author and a pathologist.