Clinical significance of sarcopenia in the treatment of patients with primary hepatic malignancies, a systematic review and meta-analysis

Data sources: A systematic literature search was performed in English through February 1, 2017 in databases.

Conclusions: Sarcopenia seemed to have a negative effect on overall survival in patients with primary liver tumors in the early phase post-treatment, but further research is needed to investigate the prognostic impact on overall survival over the longer term. Moreover, sarcopenia could significantly increase the incidence rates of post-treatment recurrence and overall complications in patients with primary liver tumors.

Sarcopenia, which is defined as the loss of muscle mass and function [1], is critically involved not only in aging but also in a variety of chronic diseases, such as tuberculosis infection, chronic obstructive pulmonary disease (COPD), diabetes mellitus (DM), advanced organ failure and other wasting conditions. In recent years, studies have shown that sarcopenia is prevalent in patients with certain cancers [2, 3], and evidence has revealed its prognostic significance in oncologic patients [4–10]. A study by Chindaprasirt J [11] demonstrated that patients who suffered from sarcopenia had shorter median overall survival among cancer patients. More specifically, the frequency of sarcopenia varied greatly from 11.1% to 76% in patients with primary liver tumors (hepatocellular carcinoma (HCC) and intrahepatic cholangio-carcinoma (ICC)) [12–14], and the demonstration of the prognostic significance of sarcopenia has been reported relatively frequently in patients with primary liver tumors. To the best of our knowledge, several reviews [15–17] have shown that sarcopenia can be associated with impaired overall survival and increased postoperative morbidity in primary liver tumors. However, these studies have had several limitations. First, the reviews included studies evaluating different tumor types (including gastrointestinal and hepatopancreatobiliary malignancies). Second, the relationships between sarcopenia and the recurrence of malignancy or post-treatment complications (overall complications and major complications) were not described. 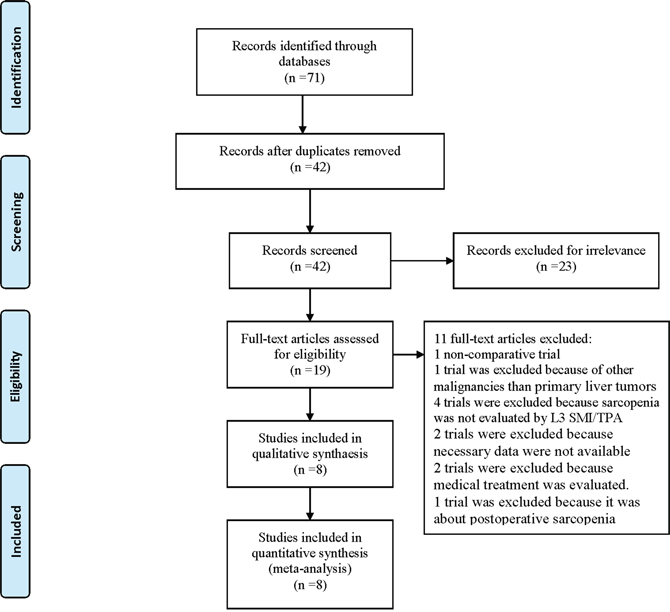 Detailed characteristics of the included patients are listed in Table 1. Of these 8 comparative trials, the Newcastle-Ottawa Scale (NOS) [18] was applied to determine the risk of bias in this literature. According to the scores (Table 2), all the included trials were considered high-quality (score ≥7) trials.

Table 1: The characteristics of the included studies

* Age (year) is given in mean (minimum~maximum) or mean±SD

^ Significant clinicopathological factors between patients with and without sarcopenia

†Time given in month

#all patients were examined monthly for recurrence by ultrasonography and estimation of tumor markers (AFP, DCP) and by CT every 3-6 months.

Table 2: The Newcastle-Ottawa Scale for assessing the quality of included studies 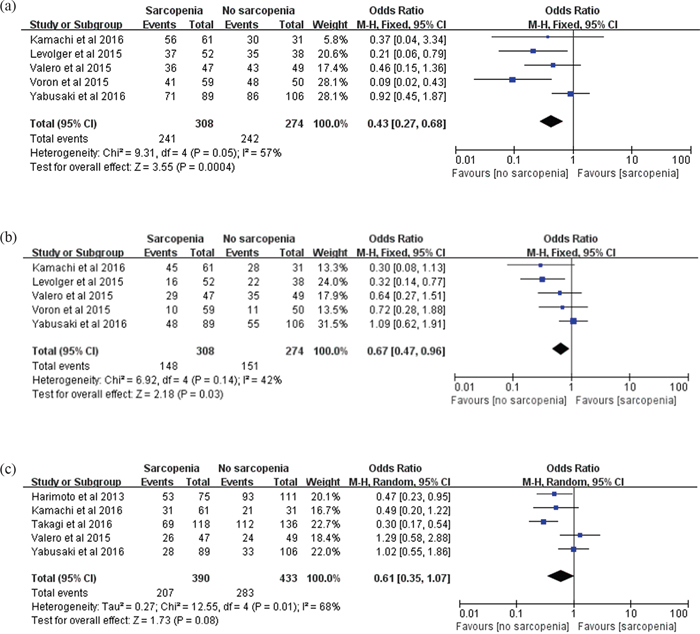 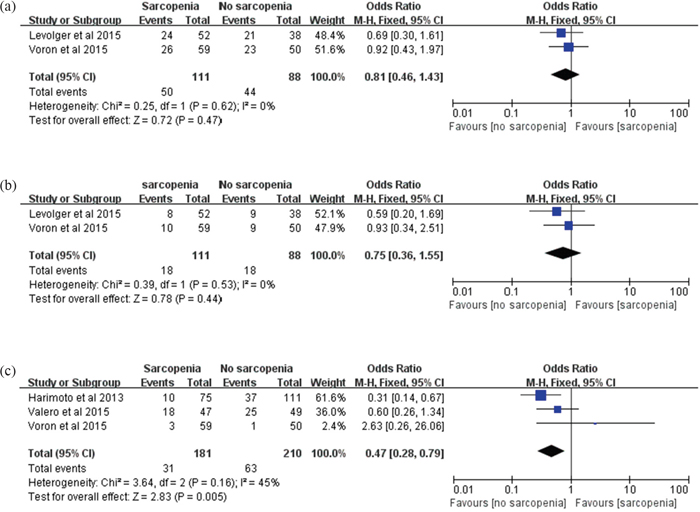 Figure 4. Meta-analysis of the recurrence rate. 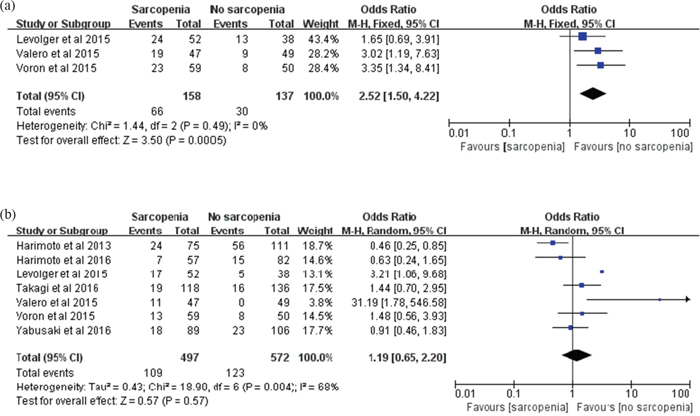 Numerous studies have demonstrated that there are correlations between sarcopenia and patients' basic characteristics, such as age [20-22, 24, 26, 27], sex [4, 12, 23, 27], liver function(serum albumin levels) [4, 22, 23], and BMI values [4, 12, 19, 22-24, 26-28]. As reported, sarcopenia occurs during aging, and in patients with primary hepatic malignancies, this is possibly due to cachexia-associated processes. Accordingly, in patients with primary hepatic malignancies, sarcopenia is prevalent across all ages but particularly in the elderly [20-22, 24, 26, 27]. Moreover, because of faster deterioration of muscle mass in men than in women, at older ages, men experience greater losses of muscle mass than women [29, 30]; thus, with regard to sex differences, sarcopenia is more common in men than women [4, 12]. However, a study by Yabusaki et al. [23] showed that the results for sex differences seemed to contradict the present findings. Furthermore, patients with sarcopenia have significantly lower BMI values than patients without sarcopenia, and the serum albumin levels of these patients are generally lower [4, 22, 23]. In limited studies, sarcopenia was correlated with number of tumors [23], micro-vascular invasion [24] and tumor stage [24], which would seem to contradict the present findings. We found no correlations between sarcopenia and tumor size, Child-Pugh grade, Model for End-stage Liver Disease (MELD) score, liver cirrhosis, Barcelona Clinic Liver Cancer (BCLC) classification or tumor differentiation. There have been no reports concerning the relationships between sarcopenia and lymph node metastasis, distant metastasis or positive surgical margin. Additionally, skeletal muscle protein breakdown occurs mainly because of age-related low-grade systemic inflammation, alongside physical inactivity and malnutrition in the elderly. This low-grade systemic inflammation is characterized by elevated pro-inflammatory cytokines and is caused by age-related cell damage and mitochondrial dysfunction [3]. However, there have been no reports concerning the relationship between sarcopenia and white blood cell counts, neutrophil-to-lymphocyte ratios (NLRs) or C-reaction protein (CRP).

Sarcopenia has been revealed to be an unfavorable prognostic factor for clinical outcomes in cancer. However, whether this finding also holds true in patients with primary hepatic malignancies has increasingly been explored recently. Unfortunately, this research field has been severely hampered by a lack of consensus on the definition of sarcopenia, and the definition of sarcopenia has varied even among studies conducted by researchers in the same country [19, 21, 22]. Consequently, the prevalence of sarcopenia has varied widely, from 11.1% to 76% across published studies. CT scanning is the gold standard tool to quantify skeletal muscle mass [31] and hence constitutes a good resource for objective identification of sarcopenia. To avoid intrinsic bias, we chose trials in which sarcopenia was defined using a L3 SMI/TPA cut-off rather than intramuscular adipose tissue content (IMAC) or visceral fat area (VFA) in our meta-analysis. However, the included studies’ evaluations of different cut-off values for sarcopenia undoubtedly led to bias between the associations of sarcopenia with clinical outcomes.

In recent years, the clinical significance of sarcopenia has been reported relatively frequently in patients with primary hepatic malignancies, and concerns about the impact of sarcopenia on outcomes following treatment could not be confirmed in various studies. Levolger et al. [19] showed that sarcopenia was associated with impaired survival (P=0.002) in patients with HCC, and MCs were more frequent (P=0.033) in sarcopenic patients. However, a study by Yabusaki et al. [23] showed that there was no significant correlation between OS (P=0.72), and there was no difference in the incidence of postoperative MCs (P=0.62) between the two groups. The difference might have derived from the inclusion criteria because Levolger et al. included patients with hepatocellular carcinoma undergoing treatment with curative intent (hepatectomy or RFA), while Yabusaki et al. enrolled patients who underwent primary hepatectomy for hepatocellular carcinoma. Also, the relatively small number of participants could have biased the results. Our systematic review and meta-analysis confirmed that patients with sarcopenia had a statistically significantly poorer prognosis (overall 1- and 3-year survival, 5-year DFS, incidence of recurrence and post-treatment OCs) than those without sarcopenia. In contrast, there were no significant differences in overall 5-year survival, 1- and 3-year DFS or post-treatment MC.

Regarding post-treatment complications, they remain controversial. Valero et al. [21] showed that the presence of sarcopenia was an independent predictive factor of OCs and MCs. However, evidence [19] has also shown sarcopenia did not increase the incidence of OCs. The available data from our meta-analysis suggested that sarcopenia increased the incidence of OCs significantly. However, our study provided no evidence of an increased risk of MCs in sarcopenic patients. The reasons below might account for the non-statistically significant difference in MCs: 1) patients with sarcopenia might receive more intensive care before, during and after treatment; and 2) the absence of a sub-analysis of each complication might have caused potential bias because each complication that develops after HCC/ICC treatment could have a different relationship or causality with sarcopenia and a different impact of prognosis.

Our present meta-analysis had several limitations. In particular, the absence of randomized, controlled clinical trials and the preponderance of retrospective studies could have biased the results to some extent. Second, the relatively small number of participants could have biased the results. Third, several trials were excluded because sarcopenia was not evaluated by L3 SMI/TPA, which could have caused potential bias. Fourth, no subgroup analysis could be conducted because the data extracted from the included studies were not disaggregated by groups. Fifth, the absence of a consistent duration between CT scans and treatment might have created potential bias. Sixth, we failed to elucidate whether sarcopenia was truly a causal factor of poor prognosis or merely a concomitant finding of primary hepatic malignancies or a type of co-morbidity.

This systematic literature review and meta-analysis were performed using the methodology suggested by the PRISMA guidelines. A systematic literature search was performed in English through February 1, 2017, in the following databases: Medline, PubMed, Medline, Embase, Web of Science and the Cochrane Library. The key words used were “sarcopenia,” “hepatocellular carcinoma,” “intrahepatic cholangio-carcinoma,” “primary hepatic malignancy,” “third lumbar skeletal muscle index,” “third lumbar total psoas area,” and abbreviations thereof. The key words were combined with appropriate Boolean operators, and for further relevant articles, we also checked the reference lists of all the identified trials. After completing the literature searches, titles and abstracts of the studies were screened by two authors, and any disagreement was resolved by discussion or, if necessary, adjudicated by a third author.

The inclusion criteria were as follows: 1) a prospective or retrospective cohort study was adopted; 2) the L3 SMI/TPA was measured by CT scan; and 3) patients were examined regularly and had a minimum follow-up duration of 12 months. When the same patient cohort overlapped among different publications, only the latest or complete study was considered.

The following studies were considered to be ineligible: 1) studies associated with animals; 2) case reports or studies in which the control groups were not well designed; 3) post-treatment sarcopenia; 4) and sarcopenia evaluated by intramuscular adipose tissue content (IMAC)/visceral fat area (VFA) rather than by L3 SMI/TPA.

Data extraction was performed independently by two authors using a standard form. The following data were extracted from each study: the basic information of the study (surname of the first author and year of publication, country of the procedure performed, study design, group assignment, histopathological type, treatment, CT scan parameters, definition of sarcopenia, number of patients and ages, follow-up duration) and the clinical significance of sarcopenia in the treatment of HCC/ICC (overall survival, disease-free survival, recurrence of malignancy, overall complications and major complications). The methodological quality of each trial was assessed according to the NOS, which evaluates included studies based on three broad perspectives: 1) selection; 2) comparability; and 3) outcome. The NOS assigns a maximum score of 4, 2 and 3 for selection, comparability and outcome respectively. High-quality trials scored ≥7, and moderate-quality trials scored ≥5 (maximum possible score equal to 9).

The statistical analysis was performed independently by two authors according to recommendations from the PRISMA statement and the Cochrane handbook from the Cochrane Collaboration. Pooled relative risk (RR) with 95% confidence intervals (95% CIs) were calculated for each principal dichotomous variable outcome using either a fixed effects model or a random effects model. Values <1 did not favor the sarcopenia group and values >1 favored the sarcopenia group for overall survival and disease-free survival rate (it should have been the opposite for the parameters such as recurrence and complications rate). We analyzed heterogeneity among the studies using Cochrane’s Q test and by calculating I2, with P < 0.05 used to denote statistical significance and with I2 calculated to measure the proportion of total variation in the estimates of treatment effect due to heterogeneity beyond chance. No subgroup analysis could be conducted in our meta-analysis because the data extracted from the included studies were not disaggregated by groups. All the statistical analyses were performed using RevMan software, version 5.3, provided by Cochrane Collaboration.

This study was supported by a grant from program for science & Technology Innovation Talents in universities of Henan Province (NO.14HASTIT030)