In the worldwide, there are approximately 240 million individuals who carried chronic hepatitis B virus (HBV), therefore, it remains a very serious health problem. [1, 2]. A Chinese survey of hepatitis B reported that Chinese people aged 1-59 years has a weighted prevalence of HBsAg with 7.2% [3], it showed that about 93 million people in China are infected with HBV. The risk factors of persistent viral infection include the following aspects: (1) host factors, contains sex, age, infection immunity and genetic variability; (2) virological factors, including viral gene mutation, gene type and viral load; (3) external factors, such as alcohol and chemotherapy [4]. Although the underlying molecular mechanisms have not yet been identified, we know that host genetic and viral factors are the crucial factors [5]. Some research studies have extensively investigated the relationship between candidate genes and the progression of HBV infection, including human leukocyte antigen system, cytokines, and killer cell immunoglobulin-like receptors [6–9]. But most of the candidate genes are still controversial in the immune response. The relationship between HBV infection and other host genetic diversities need further study. Persistent viral infection, HBV occurrence are influenced by immunological and host genetic factors [10–12], all of them are involved in host and virus interaction. Thus, in the investigation of disease pathology, researching the relationship between the host immune responses and gene polymorphisms may lead to new insights into HBV infection and the host responses. The future studies in different genes and their polymorphisms should gather useful information for better understanding and characterizing in HBV infection susceptibility.

Zinc finger (ZNF) genes belong to a large gene family, which has an estimated 500–600 members in the human genome [13]. The estimated 500 ZNF genes map to a variety of human chromosomes. Recently, one variant (rs8105767) within ZNF208 gene was mentioned in a GWAS about the association with telomere length [14, 15]. The protein expressed belongs to Zinc Finger protein family [16, 17]. Through these structures, they can bind to DNA and further regulate gene transcription. The gene ZNF208 may be one of the most crucial factors to suppress gastric cancer [18]. And another study showed ZNF208 was involved in affecting the imatinib mesylate response to gastrointestinal stromal tumor [19]. Very large GWAS have identified some genes that are associated with interindividual variation in leukocyte telomere length, including SNPs in CTC1, TERT, TERC, ACYP2, OBFC1, NAF1, ZNF208 and RTEL1 [20, 21].

A total of 242 patients with HBV and 300 healthy individuals were enrolled in the study. The participant characteristics are shown in Table 1. The mean age of the participants was 60.42 years in the control group and 50.04 years in the case group. There exist significant differences with P < 0.001 in gender, age, smoking, alcohol drinking between patients in the case and control groups. Therefore, any one of them may be regarded as confounding factors in the research between SNPs and HBV susceptibility in our case-control study.

Table 2: Primers used in this study

Table 3: Basic information of candidate SNPs in this study

We further assessed the association between each SNP and HBV risk in an unconditional logistic regression analysis, which was performed using three models: dominant, recessive, additive and genotype model (Table 4).

Table 4: Associations between the SNP genotypes of ZNF208 and the risk of HBV

P-adjust were adjusted by the Bonferroni correction. 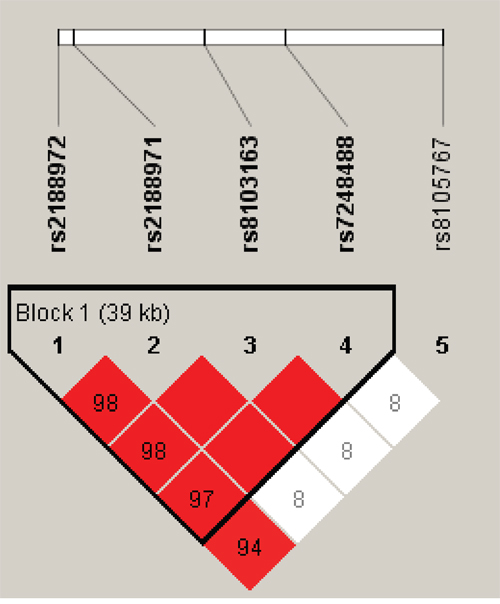 P-adjust were adjusted by the Bonferroni correction.

Telomere is the extreme end of chromosomal DNA, which is through the regulation of cell replication function to maintain genomic stability [22, 23]. Telomeres progressively shorten with the repeated cell division, because of the inability of DNA polymerase to complete the replication of the 3’ end of linear DNA [24].

As we all know, the men are more easily to be infected with HBV than women [25]. In China, the HBsAg is significantly higher for males than females with a prevalence of 8.6% and 5.7% [26]. Reasons for sex discrepancy are complex, some research detected that sex hormones might interact with HBV infection process. Alcohol consumption, an environmental factor, has been implicated in HBV pathogenesis [27, 28]. However, the different outcomes of HBV infection cannot be fully explained the differences in environmental or viral factors [29]. To decrease bias of these confounding factors on effect estimates, we conducted the adjustment for sex, age, alcohol drinking and smoking. An association between age and acute HBV infection revealed that the risk of becoming a HBV carrier was correlated with age of the patient [29].

DNA binding of the encoded proteins is typically mediated by a ZNF motif that consists either of two histidines and two cysteines or four cysteines alone. The number of ZNF motifs is highly variable ranging from 2 to 40 copies in different members of the ZNF family. ZNF208 is a member of a large family of zinc finger proteins containing Kruppel-associated box domains, which serve as transcriptional regulators [31]. Unfortunately, there is a paucity of information about ZNF208 function in mammalian cells.

Recently, several case-control studies reported that ZNF208-associated SNPs were not associated with Chronic lymphocytic leukemia risk at P < 0.05 [32]. A meta-analysis found that seven loci involved in telomere biology, including rs755017 in RTEL1, rs9420907 in OBFC1, rs2736100 in TERT, rs10936599 in TERC, rs7675998 in NAF1, rs8105767 in ZNF208, and rs11125529 in ACYP2, and the subsequent large, case-control study identified the relationship between shorter LTL and increased risk of coronary artery disease in those of European population [21]. The genotype and allele frequency of rs8105767 was significantly different between the normal controls and the coronary heart disease [33]. In previously published studies, there had few research reported that the association between ZNF208 gene and HBV susceptibility. In current study, we studied the correlations between five SNPs (rs2188971, rs8103163, rs7248488, rs2188972 and rs8105767) in ZNF208 gene and HBV susceptibility in Chinese Han population.

Our study still had some limitations. Firstly, the statistical power of our study may be limited by the sample size and the future studies with a larger sample size should provide more valuable information. Secondly, some detailed clinical information of samples is incompleted and therefore further analysis to identify any associations between the SNPs and the clinical characteristics of these patients could not be done.

In conclusion, our findings revealed that ZNF208 polymorphsims play complex roles in the development of HBV, and it could provide new evidences for the association between SNPs and haplotypes of ZNF208 and the risk of HBV. This study offers new information on the relationship between ZNF208 polymorphisms and HBV. Future functional studies are needed to confirm the correlation between the ZNF208 gene and HBV pathogenesis, especially with respect to different ethnicities. Moreover, this study reveals the molecular markers associated with of HBV susceptibility and could therefore be used as diagnostic and prognostic markers for HBV patients in clinical study.

Our present study was approved by the Ethics Committee of the First Affiliated Hospital, Medical School of Xi'an Jiaotong University. Informed consent forms were signed by all participants. Consent was obtained from all the subjects participating in the present study.

A total of 542 subjects (242 HBV patients and 300 healthy subjects) were recruited in our ongoing case-control study. We recruited the HBV patients (mean age ± SD = 50.04 ± 12.048) and 300 healthy subjects (mean age ± SD = 60.42 ± 5.143) from the Xi’an area of Chinese Han Population. All subjects were informed of the purpose of the study and the experimental procedures involved. We performed an uniform questionnaire in all of the subjects, the information include sex, age, alcohol consumption, family history of HBV infection, self-report of HBV transmission et al. All of the subjects were excluded from the study if they had a family history of HBV. The diagnostic criteria of HBV carriers were serum HBsAg positivity for over one year, normal liver function tests, and no clinical symptoms. The exclusion criteria were as follows: Non-HBV-related acute or chronic hepatitis; Liver cirrhosis or hepatocellular carcinoma; Mother to child transmission; Patients presenting HBsAg seroconversion post-CHB treatment.

We had selected five SNPs in ZNF208 that had with minor allele frequencies (MAF) > 5% and were associated with HBV in the HapMap Asian population in current study. Venous blood samples (5 mL) were collected from each patient during a laboratory examination. We extracted genomic DNA from peripheral blood samples using the GoldMag-Mini Whole Blood Genomic DNA Purification Kit (GoldMag Ltd. Xi'an, China) according to the manufacturer's protocol. Sequenom MassARRAY Assay Design 3.0 Software was used to design primers for amplification and extension reactions [34]. SNP genotyping using the standard protocol recommended by the manufacturer was performed by Sequenom MassARRAY RS1000. Finally, Sequenom Typer 4.0 Software was used to perform the data management and analysis [34, 35].

We used Microsoft Excel and the SPSS 17.0 statistical package (SPSS, Chicago, IL) to perform statistical analyses. All of the p-values presented in this study are two-sided, and p < 0.05 was used as the threshold of statistical significance. Chi-squared tests (categorical variables) and Student’s t-tests (continuous variables) were used to evaluate the differences in the demographic characteristics between the cases and controls [36]. The Hardy-Weinberg equilibrium of each SNP was assessed in order to compare the expected frequencies of the genotypes in the control patients. All of the minor alleles were regarded as risk alleles for HBV susceptibility. Unconditional logistic regression models were used to estimate crude and adjusted odds ratios (OR) and 95% confidence interval (CI) for gender, age, alcohol drinking and smoking [37]. We used the web-based software SNP stats to test the associations between SNPs and the risk for PTB in four genetic models (genotype, dominant, recessive, and additive) [38].

We are grateful to the patients for their participation.

All of these authors declare that they have no competing interests.