Erdheim-Chester disease (ECD) is a rare form of non-Langerhans cell histiocytosis affecting adults, which is associated with xanthogranulomatous infiltration of foamy macrophages.[1-3] ECD is deemed to be driven by increased signaling within the mitogen-activated-protein kinase pathway. Advances in genome sequencing technologies led to the identification of BRAF V600E mutations in at least 50% of patients with ECD.[4] Furthermore, preliminary results suggest that patients with ECD and BRAF mutations can benefit from targeted inhibition of BRAF protein with BRAF inhibitors.[5] Unfortunately, archival tissue often does not provide an adequate amount of DNA for molecular testing. Therefore, novel technologies allowing mutation analysis to be performed using alternative sources of biologic material are needed.[6]

Cell-free DNA (cfDNA) is released to the circulation from cells undergoing apoptosis, necroptosis and active secretion and has been identified in the plasma and urine of patients with cancer.[7, 8] Detecting and quantifying the amount of mutant cfDNA fragments harboring specific mutations can be used as an alternative to tissue testing. Some data suggest that the amount of mutant DNA correlates with tumor burden and can be used to identify the emergence of resistant mutations.[9-14] The concept of mutation testing from urine cfDNA has been assessed in a pilot study in patients with advanced colorectal cancer and other colorectal diseases in which KRAS mutations in urine cfDNA were concordant in 95% of cases with KRAS mutation status in tumor tissue.[15] We examine in our study whether urine and plasma cfDNA can be used as an alternative to tissue biopsies for BRAF V600E mutation testing in patients with ECD.

A total of 6 patients with ECD were enrolled. Their median age at diagnosis was 46 years (range, 26 to 71 years) and most patients were white 4 (67%) and male 4 (67%). Tumor tissue BRAF V600E mutation testing with targeted next-generation sequencing and/or allele-specific PCR in the CLIA-certified laboratory was requested for all 6 patients, but 3 patients had insufficient tissue samples, precluding mutation analysis (Table 1). BRAF V600E mutations were detected in 2 (67%) of 3 tested tumor tissue samples, 3 (50%) of 6 plasma cfDNA samples and 4 (67%) of urine cfDNA samples (Figure 1). Observed agreements were 100% (3 of 3, kappa 1.00) for tumor tissue and plasma cfDNA, 100% (3 of 3, kappa 1.00) for tumor tissue and urine cfDNA, and 83% (5 of 6, kappa 0.67) for plasma cfDNA and urine cfDNA (Table 1). In addition, there were no BRAF V600E mutations in plasma and urine cfDNA from 14 patients with metastatic cancer with confirmed wt BRAF in their tumor tissue (data not shown). Finally, only one patient (patient 1) was treated with a BRAF inhibitor; however, the treatment outcomes were not available at the time of analysis. 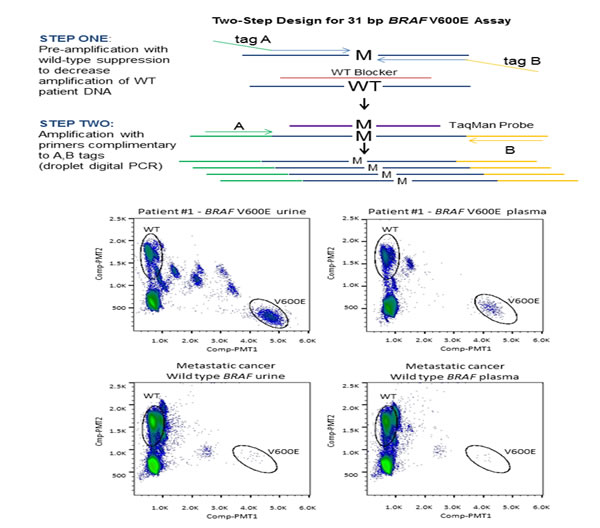 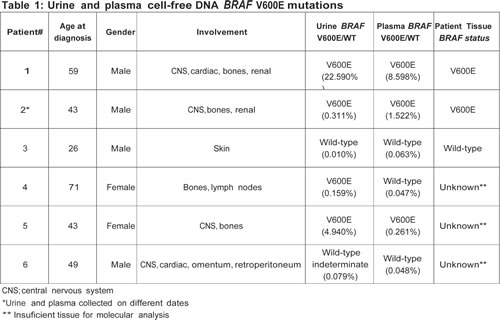 BRAF V600E mutations have been reported in more than 50% of patients with ECD.[4] In addition, preliminary data reveal encouraging activity of BRAF inhibitors such as vemurafenib in ECD patients with BRAF V600E mutations.[5] Mutation analysis of tumor tissue remains a gold standard for molecular analysis; however, in some disorders such as ECD, available tumor tissue often does not provide enough DNA for molecular analysis. In our experience, archival tissue testing for BRAF mutations is not feasible in up to 60% of patients.[6] This creates a major hurdle for further implementation of personalized therapies into the ECD therapeutic armamentarium since BRAF inhibitors in general can be effective in patients with BRAF mutations but detrimental in patients without them.[16] Therefore, there is a clear need for a new and easily obtainable source of material that can be used to analyze tumor molecular aberrations. [7, 8] cfDNA is released to the circulation from cells undergoing apoptosis, necroptosis and active secretion and has been identified in the plasma or urine of patients with cancer.[9-14] Arguably, cfDNA can originate from multiple tumor sites and its molecular analysis may perhaps better reflect prevailing molecular aberrations.[9, 10]

Our study suggests that mutation analysis of plasma and/or urine cfDNA from patients with ECD can be concordant with archival tissue and should be investigated as its alternative in furthering personalized therapy for patients whose tumor tissue is in short supply.

Patients with ECD were referred to the Clinical Center for Targeted Therapy at The University of Texas MD Anderson Cancer Center (MD Anderson) and prospectively enrolled starting in January 2013. In addition, 14 patients with metastatic cancers with known wild-type (wt) BRAF in tumor tissue were used as a negative control group. Database registration of patients and pathology assessment were performed at MD Anderson. The study and all treatments were conducted in accordance with MD Anderson Institutional Review Board guidelines. A total of 10mL blood samples and approximately 60-120mL of urine from each consented patient were used for DNA isolation.

Adriana Muniz-Fernandez and Mary Barry are acknowledged for their technical expertise. We also thank Joann Aaron, MA, for editorial assistance.