Ovarian low-grade serous carcinoma (LGSC) is a rare disease and is now considered to be a distinct entity from high-grade serous carcinoma (HGSC), which is the most common and malignant form of epithelial ovarian cancer. Connective tissue growth factor (CTGF) is a secreted matricellular protein that has been shown to modulate many biological functions by interacting with multiple molecules in the microenvironment. Increasing evidence indicates that aberrant expression of CTGF is associated with cancer development and progression. Transforming growth factor-β1 (TGF-β1) is a well-known molecule that can strongly up-regulate CTGF expression in different types of normal and cancer cells. Our previous study demonstrated that TGF-β1 induces apoptosis of LGSC cells. However, the effect of TGF-β1 on CTGF expression in LGSC needs to be defined. In addition, whether CTGF mediates TGF-β1-induced LGSC cell apoptosis remains unknown. In the present study, we show that TGF-β1 treatment up-regulates CTGF expression by activating SMAD3 signaling in two human LGSC cell lines. Additionally, siRNA-mediated CTGF knockdown attenuates TGF-β1-induced cell apoptosis. Moreover, our results show that the inhibitory effect of the CTGF knockdown on TGF-β1-induced cell apoptosis is mediated by down-regulating SMAD3 expression. This study demonstrates an important role for CTGF in mediating the pro-apoptotic effects of TGF-β1 on LGCS.

Connective tissue growth factor (CTGF), also known as CCN2, is a secreted matricellular protein that belongs to the CCN protein family [1]. The members of the CCN protein family do not have structural roles, but they can regulate various cellular functions in response to different environmental stimuli by modulating the interactions between the cell and extracellular matrix [2, 3]. CTGF is the most studied member of the CCN protein family and was originally identified in the conditioned media of human umbilical vein endothelial cells as a platelet-derived growth factor-inducible immediate early gene [4]. To date, multiple biological functions of CTGF have been discovered in both physiological and pathological conditions [5].

Ovarian cancer is the most lethal of all gynecologic malignancies, and more than 90% of ovarian cancers are of epithelial origin [6]. The majority of epithelial ovarian cancers are of the serous subtype. Recently, it has been shown that serous ovarian carcinomas can be categorized into two groups that are designated low-grade serous carcinoma (LGSC) and high-grade serous carcinoma (HGSC) according to clinical, pathological, and molecular genetic studies [7]. LGSC is rare and is thought to develop from serous borderline ovarian tumors (SBOT). In contrast, HGSC, the most common form of epithelial ovarian cancer, is usually associated with aggressive clinical features and has been considered to rise from the ovarian surface epithelium (OSE) or from serous tubal intra-epithelial carcinomas in the fallopian tube [7, 8]. In the past few decades, researchers were mainly focused on the biology of HGSC, while LGSC has received little attention. It has been shown that relatively a poor prognosis, responsiveness to conventional chemotherapy and survival are observed when SBOT progresses to LGSC [9, 10]. Therefore, developments of reliable diagnostic and effective therapeutic methods will significantly improve the survival rate of patients with LGSC.

A few in vitro studies have demonstrated that CTGF promotes HGSC cell migration, growth and peritoneal adhesion [11, 12]. In addition, immunohistochemical studies reveal that the expression levels of CTGF are correlated to HGSC stage and negatively associated with poor survival [12, 13]. Our previous studies have shown that treatment with transforming growth factor-β1 (TGF-β1) or CD40 ligand can induce LGSC cell death [14, 15]. Interestingly, TGF-β1 has been identified as a strong molecule that can up-regulate CTGF expression in many types of normal and cancer cells derived from different organs including the ovary [3, 5, 16, 17]. However, to date, the effect of TGF-β1 on CTGF expression in LGSC needs to be defined. Furthermore, if TGF-β1 does up-regulate CTGF expression, whether CTGF mediates TGF-β1-induced LGSC cell death remains unknown. In this study, our results show that treatment with TGF-β1 up-regulated CTGF expression in two human LGSC cell lines through activation of the SMAD3 signaling pathway. In addition, siRNA-mediated CTGF knockdown attenuated TGF-β1-induced up-regulation of cleaved caspase-3 and cell apoptosis. Moreover, we find that the knockdown of CTGF attenuated TGF-β1 signaling by down-regulating SMAD3 expression.

To examine the effect of TGF-β1 on CTGF expression in LGSC cells, the human LGSC cell line MPSC1 was treated with 10 ng/mL TGF-β1 for different periods of time. As shown in Figure 1A, a 1 h treatment with TGF-β1 significantly up-regulated CTGF mRNA levels. The maximal effect was observed after 3 h of TGF-β1 treatment and then decreased but remained detectable after 24 h of treatment. In addition, the western blot results showed a similar effect of TGF-β1 on CTGF protein levels in MPSC1 cells (Figure 1B). Glycosylation of CTGF has been shown to produce multiple bands on a western blot [18]. Moreover, the stimulatory effect of TGF-β1 on CTGF expression was further confirmed in another human LGSC cell line, ILGSC (Figure 1C). 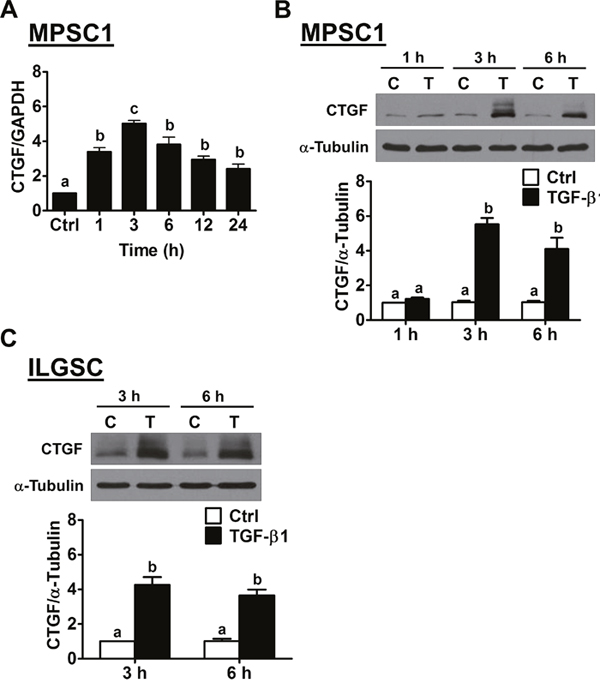 It is well characterized that, upon binding of TGF-β1, the TGF-β type II receptor recruits and activates TGF-β type I receptor. The activated type I receptor then phosphorylates the downstream signaling molecules, SMAD2 and SMAD3. Phosphorylated SMAD2 and SMAD3, in turn, bind with the co-SMAD SMAD4, and the SMAD complexes can translocate to the nucleus, where they regulate gene expression [19]. To examine whether TGF-β receptor is required for TGF-β1-induced up-regulation of CTGF, a potent and specific TGF-β1 type I receptor inhibitor, SB431542, was used to block the signaling that was activated by TGF-β1 [20]. MPSC1 cells were pretreated with 10 μM SB431542 for 1 h and then treated with 10 ng/mL TGF-β1 for 3 h. The results of RT-qPCR showed that SB431542 abolished the TGF-β1-induced up-regulation of the CTGF mRNA levels without affecting its basal levels. The western blot results further confirmed the inhibitory effect of SB431542 on the TGF-β1-up-regulated CTGF protein levels in MPSC1 cells (Figure 2B). Similar results were observed in ILGSC cells (Figure 2C and 2D). To examine the involvement of SMAD signaling in TGF-β1-induced CTGF expression, the siRNA-mediated SMAD4 knockdown approach was used. As shown in Figure 3A, SMAD4 siRNA significantly down-regulated SMAD4 expression in both MPSC1 and ILGSC cells. In addition, knockdown of SMAD4 abolished TGF-β1-induced up-regulation of CTGF protein levels. Our previous study shows that TGF-β1 activates SMAD3, but not SMAD2, in MPSC1 cells [14]. Therefore, we knocked down SMAD3 to examine whether SMAD3 was required for TGF-β1-induced up-regulation of CTGF expression. As shown in Figure 3B, similar to SMAD4 knockdown, the knockdown of SMAD3 abolished TGF-β1-induced up-regulation of CTGF protein levels in both MPSC1 and ILGSC cells. 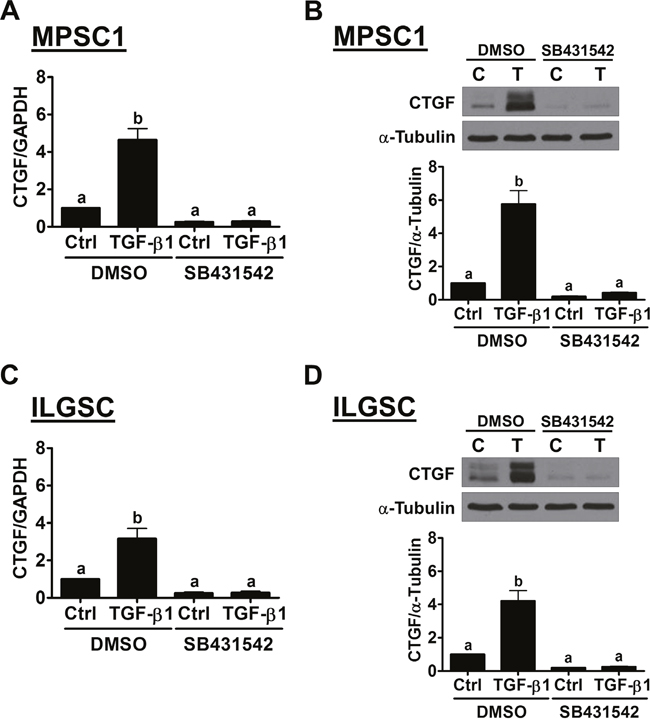 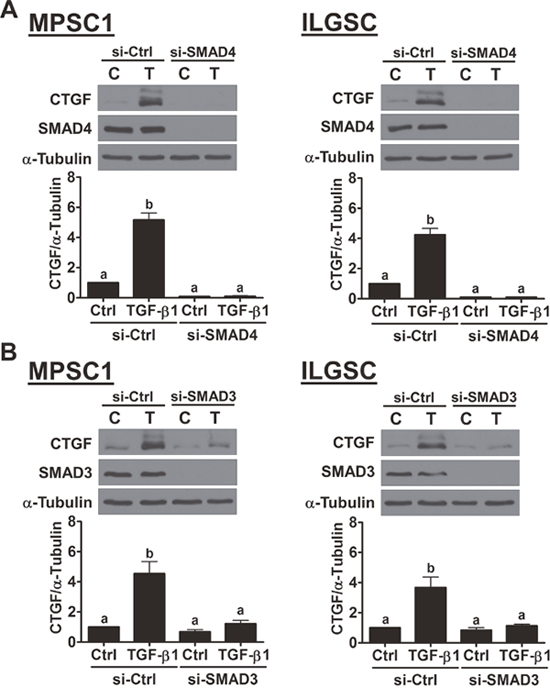 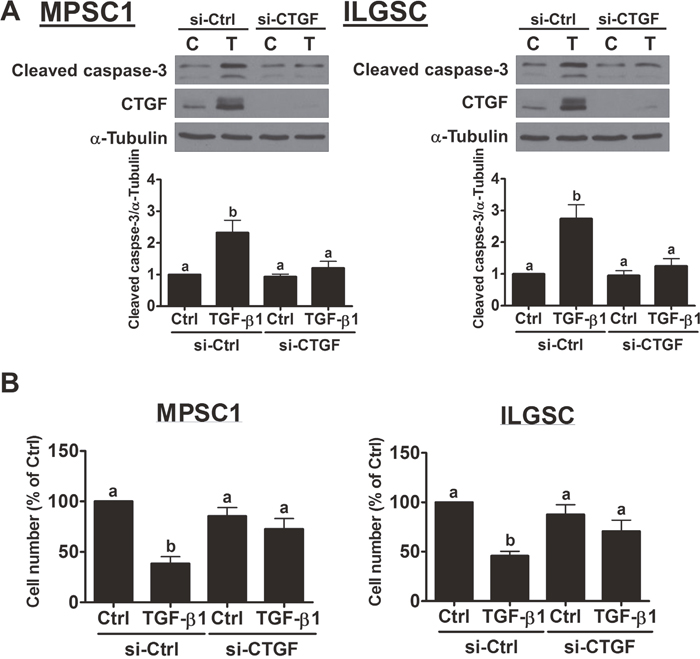 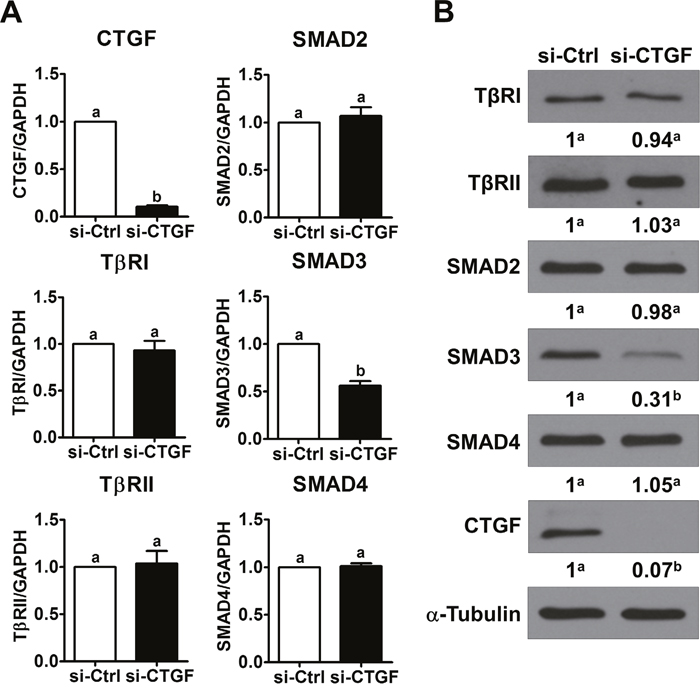 CTGF is widely expressed and has been shown to be an important modulator that regulates many physiological and pathological processes in a variety of tissues [18]. Aberrant expression of CTGF has been reported in many types of human cancer, and CTGF can function as a tumor promoter or suppressor in a context-dependent manner [21, 22]. To date, the role of CTGF in ovarian cancer has not been extensively studied. A previous study has shown that CTGF is expressed in normal OSE cells [23]. In ovarian cancer, the CTGF protein is differentially expressed among different histologic subtypes (serous, mucinous, clear cell and endometrioid). Interestingly, among all histologic subtypes, a lack of CTGF expression is found in the earlier stages (stage I and II) of disease, while the expression of CTGF is restored in the advanced stages (stage III and IV) and is associated with a more malignant phenotype. In addition, patients with stage I and II diseases with lower CTGF levels have a lower overall survival. Moreover, in vitro experiments reveal that CTGF can suppress cell proliferation in the clear cell and endometrioid subtypes of human ovarian cancer cells and ovarian granulosa cells [23, 24]. In contrast, previous studies have demonstrated that CTGF promotes cell migration and proliferation, and patients with higher CTGF expression levels are associated with poor survival in HGSC [11–13, 25]. Taken together, these results indicate that the role of CTGF in human ovarian cancer progression is complicated and its biological effects may depend on the subtype of the disease. LGSC is the least common type of human ovarian cancer. Compared to HGSC, LGSC is relatively slow growing. To the best of our knowledge, the expression and function of CTGF in LGSC are completely unknown. In the present study, our results showed that the expression of CTGF was detected by RT-qPCR and western blot in two human LGSC cell lines. Functionally, we showed that knockdown of CTGF did not affect basal cell proliferation but significantly attenuated TGF-β1-induced cell apoptosis. These results indicate that CTGF may act as a tumor suppressor in LGSC. Since LGSC is very rare, future investigations of whether CTGF expression levels correlate with clinical outcomes in LGSC will be of great interest.

CTGF is able to affect the activity of many signaling pathways [18]. It has been shown that CTGF enhances the receptor binding of TGF-β1 by directly binding with TGF-β1. In contrast, the direct binding of CTGF and BMP4, a member of the TGF-β superfamily, prevents the receptor binding of BMP4 and hence antagonizes its function [32]. Treatment with recombinant CTGF does not directly activate SMAD signaling in human proximal tubule cells and cortical fibroblasts [33]. Interestingly, treatment with CTGF rapidly down-regulates the expression of SMAD7, a well-known key negative regulator of TGF-β1 signaling, and co-treatment with CTGF enhances TGF-β1-activated SMAD2/3 in human mesangial cells [34, 35]. Injection of TGF-β1 or CTGF individually does not induce persistent fibrosis in mice, whereas co-injection of TGF-β1 and CTGF induces sustained fibrosis [36]. These results indicate that CTGF can synergistically enhance the effects of TGF-β1. In the present study, we found that siRNA-mediated knockdown of CTGF down-regulated SMAD3 expression. However, whether CTGF knockdown affects SMAD7 expression in LGSC remains unknown and will be interesting for future studies. Nevertheless, our finding provides an alternative mechanism that CTGF is required for TGF-β1-regulated biological functions. Loss of CTGF can attenuate effects of TGF-β1 by decreasing SMAD3 expression, which consequently attenuates TGF-β1/SMAD3 signaling.

Cells were lysed in lysis buffer (Cell Signaling Technology), and the protein concentrations were determined using a DC protein assay kit with BSA as the standard (Bio-Rad Laboratories). Equal amounts of protein (50 μg) were separated by SDS polyacrylamide gel electrophoresis and were transferred to PVDF membranes. After being blocked with Tris-buffered saline (TBS) containing 5% non-fat dry milk for 1 h, the membranes were incubated overnight at 4°C with primary antibodies, followed by incubation with the HRP-conjugated secondary antibody. Immunoreactive bands were detected with an enhanced chemiluminescent substrate (Pierce, Rockford, IL) and X-ray film.

The results are presented as the mean ± SEM of at least three independent experiments. The results were analyzed by one-way ANOVA and Tukey’s multiple comparison test using the PRISM software. Significant differences were defined by values of p < 0.05.

This work was supported by a Foundation Grant from the Canadian Institutes of Health Research to P.C.K.L (#143317).

5. Kubota S, Takigawa M. Cellular and molecular actions of CCN2/CTGF and its role under physiological and pathological conditions. Clin Sci. 2015; 128:181-196.