Systematic review and meta-analysis: cholecystectomy and the risk of cholangiocarcinoma

Gallstones are abnormal masses of a solid mixture of cholesterol crystals, mucin, calcium bilirubinate, and proteins [1]. Gallstone is the most common gastrointestinal disease. An estimated 10% of Europeans and Americans are carriers of gallbladder stones [2]. Furthermore, along with the improvement of living standards and population overall life extension, the incidence of cholecystolithiasis seems to be increasing [3, 4]. Additionally, gallstone is the most expensive gastrointestinal diseases, and become a global health burden [5]. For example, it costs of $6.5 billion approximately annually in the U.S [6]. Most of gallstones are silent. However, around 25% of gallstones are symptomatic and accompanied with severe complications, which need to remove the gallbladder by surgically, usually by laparoscopic cholecystectomy [7, 8]. An estimated 700,000 cholecystectomies are conducted annually in the US [3]. Over the past few decades, cholecystectomy has been reported to increase the risk of some types of cancer, including colorectal cancer, liver cancer and pancreatic cancer [9–14]. Recently, studies reported cholecystectomy may increase the risk of cholangiocarcinoma. However, this association is controversial [15–20].

Figure 1 shows the process of selecting studies. We obtained 13291 articles through the initial search (8124 from PubMed, 1879 from EMBASE, 3288 from Web of Science), 3120 of which were duplicates. We excluded a further 10274 studies based on title and abstract review. Finally, four studies were further excluded due to providing insufficient information [27–30], we identified 16 eligible observational articles for our meta-analysis [15–20, 31–40]. 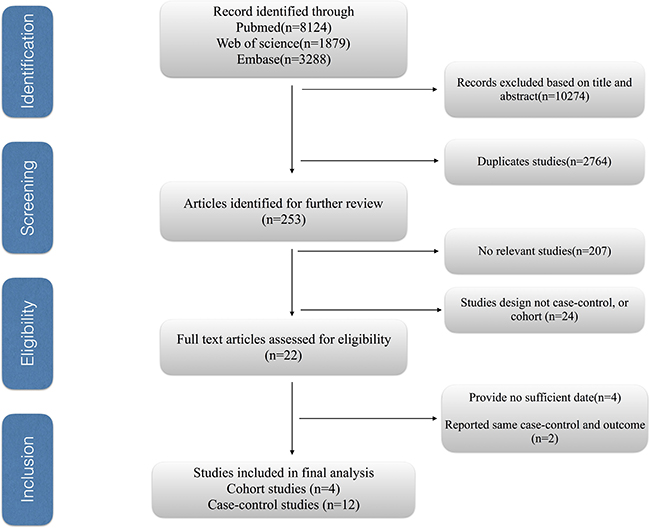 Figure 1: The process of study selection for the meta-analysis.

The main characteristics of the included studies are listed in Table 1. Six studies were performed in China, four in the USA, two in Denmark, one in Greece, one in Swedish, one in Korea and one in Taiwan. All included studies were observational studies and included 12 case-control studies and four cohort studies. The meta-analysis included 220,376 patients with cholecystectomy and 562,392 healthy controls to investigate the effect of cholecystectomy on the risk of cholangiocarcinoma. The data collected in the study ranged from 1965 to 2014. The NOS scores of the included studies ranged from 5 to 9, with 12 high quality studies and only four of medium quality (Supplementary Tables 1 and 2).

Table 1: The main characteristics of the included studies 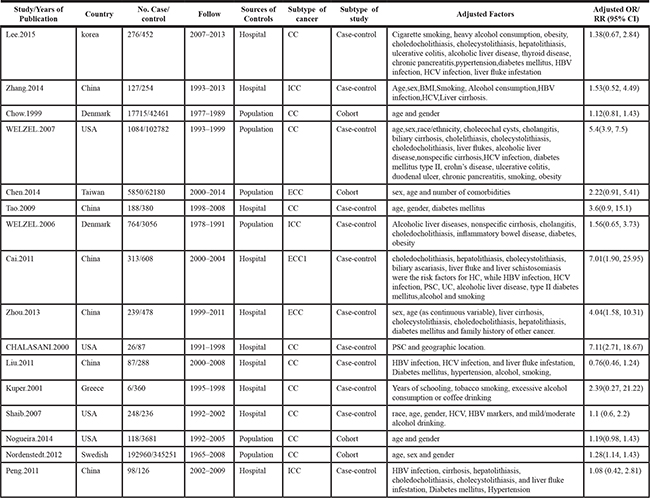 Association between cholecystectomy and the risk of cholangiocarcinoma 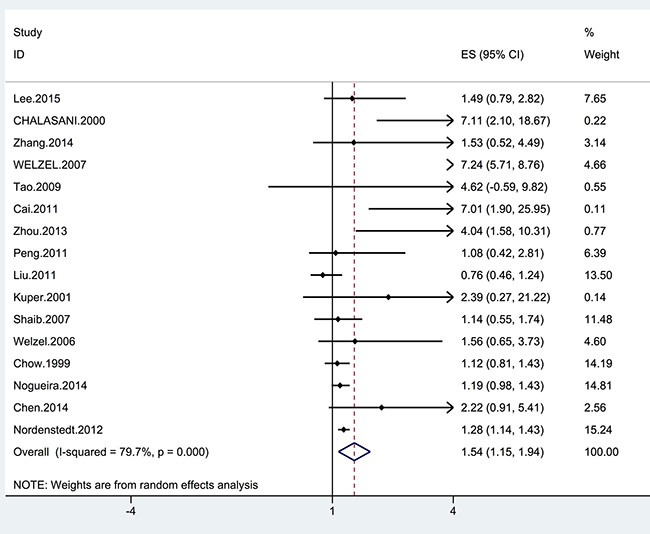 Table 2: Subgroup and sensitivity analyses of the effect of cholecystectomy and the risk of cholangiocarcinoma

The results of the subgroup analyses and sensitivity analyses are shown in Table 2. When the studies from Western countries (USA, Denmark, Greece and Swedish) and Eastern countries (Taiwan, Korea and China) were analyzed, a significant difference was found between the two areas. Patients with cholecystectomy in western countries were more likely to develop cholangiocarcinoma compared to eastern countries (western countries: OR = 1.71; 95% CI = 1.19–2.23 and eastern countries: OR = 1.17; 95% CI = 0.65–1.69) (Table 2). According to the sensitivity analyses, despite excluding studies that the NOS sources were < 7, the relationship between cholecystectomy and the risk of cholangiocarcinoma remained stable (Table 2). Additionally, the overall results for the relationships of cholecystectomy to cholangiocarcinoma were maintained when the pooling model was altered (fixed-effects model: OR = 1.24; 95% CI = 1.13–1.34 and random-effects model: OR = 1.54; 95% CI = 1.15–1.94) (Table 2). Besides, when we sequentially excluded one study in one turn to assess the stability of the results, no study could possibly affect the pooled risk estimate (Figure 3). 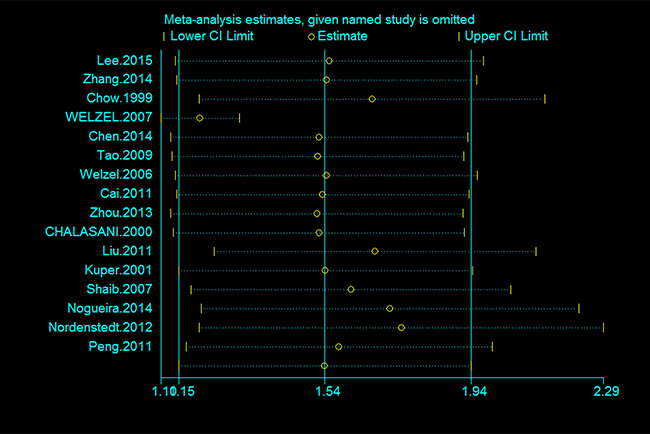 Figure 3: Sensitivity analysis of the association between cholecystectomy and the risk of cholangiocarcinoma. 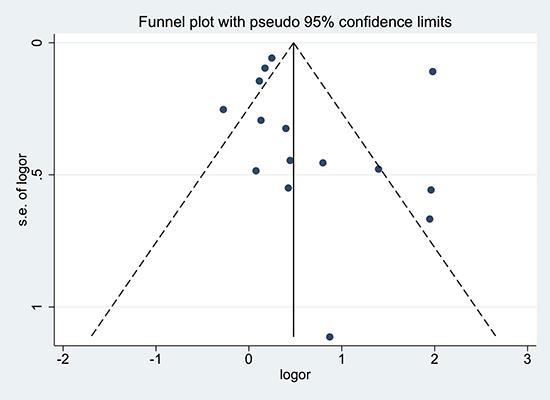 Figure 4: Funnel plot of studies included in the meta-analysis of the relationships between cholecystectomy and the risk of cholangiocarcinoma. Logor: Log odds ratio. SE: standard error.

Our study only demonstrated an association between cholecystectomy and an increased risk of cholangiocarcinoma; the data cannot establish a causative role for cholecystectomy in this regard. However, if such a causative role is present, possible mechanisms could be the following. First, several authors consider it as the effect of gallstones, rather than the ensuing cholecystectomy, which results in cancer. Early study indicated gallstones may increase the risk of cholangiocarcinoma, especially in ECC [15, 47, 48]. Second, removal of the gallbladder leads to the accumulation of bile and secondary bile acids, and secondary bile acids was associated with increased in the presence of gallstones [49–51]. Additionally, previous studies also reported secondary bile acids can enhance tumor formation in the liver [52]. Because both cholangiocytes and hepatocytes differentiate from the same progenitor cells, similar to the carcinogenesis of hepatocytes [53], secondary bile acids might induce carcinogenesis in cholangiocytes through the same mechanism.

There are several limitations that should be considered. First, most of the studies included in our meta-analysis were case-control studies, which was prone to generate recall and selection biases. Additionally, the heterogeneity among studies was significant because of different study designs and demographic characteristics inconsistency. Second, the present study only investigated the risk of cholangiocarcinoma in patients with cholecystectomy compared with healthy population. As a result of the restricted number of included studies in the analysis, the risk of cholangiocarcinoma in patients with cholecystectomy compared with gallstone patients was not explored. Third, what is being observed is just an association, which is subject to confounding bias. The established risk factors for cholangiocarcinoma include primary sclerosing cholangitis, hepatolithiasis, bile-duct cysts and parasitic infections [41]. However, only a few studies adjusted it in their models. Besides, the results of the present study are subject to diagnostic bias. Patients had cholecystectomies are more likely to undergo physical examination and thus might be more likely to have cholangiocarcinoma detected early. Finally, the length of time necessary following a cholecystectomy for any carcinogenic effect to have occurred remains unknown. It is likely that some cases of cholangiocarcinoma included in this research occurred too soon after cholecystectomy [39, 40].

In summary, our meta-analysis indicated that the risk of cholangiocarcinoma was associated with a 54% increase in patients who had cholecystectomies in comparison with healthy controls, and the relationship was also demonstrated in cohort and case-control studies. However, When the ICC and ECC were analyzed separately, the present study only indicated cholecystectomy was associated with increased the risk of ECC, rather than ICC. More prospective studies and basic research are still needed to validate the association of cholecystectomy and cholangiocarcinoma risk and the potential mechanisms.

The eligibility criteria were as follows: study design (case control or cohort); cholecystectomy as the exposure factor and cholangiocarcinoma or bile duct cancer or biliary tract cancer as the outcome; and odds ratio (OR)/risk ratio (RR) values and corresponding 95% confidence intervals available or sufficient information to calculate them. If two studies reported the same data, we selected the study with the larger sample.

Two researchers (Y.W. and A.W.) independently extracted the required information from the selected studies in a standardized manner. We collected the following information from each article: first author’s name, year of publication, country of origin, study design (case-control or cohort), number of participants, duration of follow-up, sources of controls, adjustment for confounding variables, and OR/RR values and 95% CIs.

The Newcastle-Ottawa Scale (NOS) [54] was used to evaluate the quality of the included studies. We assigned quality categories according to the scores of each study. Specifically, NOS scores of <4, 4–6, and 7–9 indicated low-, medium-, and high-quality studies, respectively [55]. The maximum total score was 9 points. We resolved discrepancies by consensus.

We also performed subgroup analyses by subtype of cancer, geographic areas, study design and whether liver fluke infestation, cholangitis, gallstones, alcohol intake or smoking were adjusted for in the models. Sensitivity analysis was conducted to assess the stability of the results by sequentially excluding one study in one turn. Additionally, sensitivity analyses were also performed by changing the pooling model (random-effects model or fixed-effects model) and excluded studies that the NOS sources were < 7.

J.X. designed the study and wrote this manuscript. Y.W. and A.W. searched database and reviewed studies. H.H., J.B, J.L, Y.Z, Y.X., and X.S. collected and analyzed data. X.L. and H.Z. coordinated and provided financial support for this work. All of the authors have read and approved the final manuscript. H.Z. is the guarantor for this study.

Declaration of personal interests: None

5. Shaffer EA. Epidemiology and risk factors for gallstone disease: has the paradigm changed in the 21st century? Curr Gastroenterol Rep. 2005; 7:132–140.

28. Urbach DR, Swanstrom LL, Khajanchee YS, Hansen PD. Incidence of cancer of the pancreas, extrahepatic bile duct and ampulla of Vater in the United States, before and after the introduction of laparoscopic cholecystectomy. Am J Surg. 2001; 181:526–528.

54. Stang A. Critical evaluation of the Newcastle-Ottawa scale for the assessment of the quality of nonrandomized studies in meta-analyses. Eur J Epidemiol. 2010; 25:603–605.