Positron emission tomography/computed tomography (PET-CT) is a noninvasive molecular imaging tool. PET-CT imaging with the glucose analogue 2-fluoro-2-deoxyglucose (18F-FDG) takes advantage of the high glucose metabolism of lung cancer cells and metastatic lesions to visualize not only tumors but also local lymph node metastasis and other distant metastases. Thus, PET-CT has become an important tool for TNM staging of lung cancers [3–6]. Previous studies have demonstrated that PET is more accurate than CT in the detection of lymph node involvement in lung cancer. The predictive ability of intravenous contrast-enhanced CT for mediastinal lymph node metastasis is well documented, and this technique has a sensitivity and specificity of 57%–68% and 76%–82%, respectively. In comparison, integrated 18F-FDG-PET/CT is a much better predictor of nodal disease, with a sensitivity of 79–85% and a specificity of 87–92% [7, 8]. However, despite these advantages, the rate of false-positive and false-negative results with PET remains an issue that needs to be resolved. Therefore, there is an urgent need to evaluate the occult nodal metastasis in clinical N0 patients staged by PET/CT based on pathological gold standard to identify the potential occult nodal metastasis predictors.

Clinical characteristics of the patients

The incidence of occult nodal metastasis 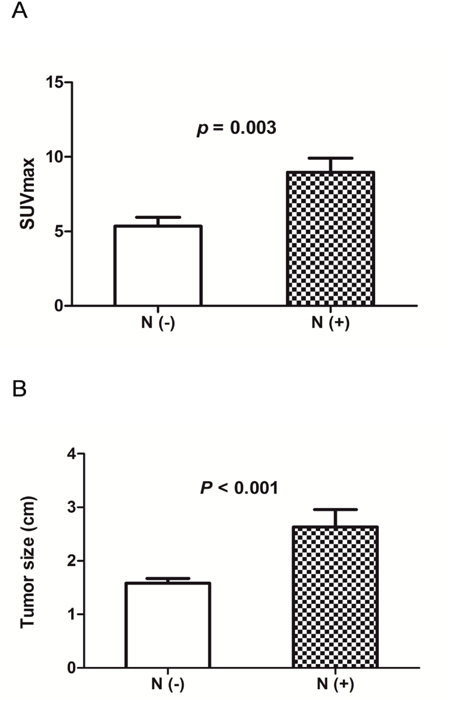 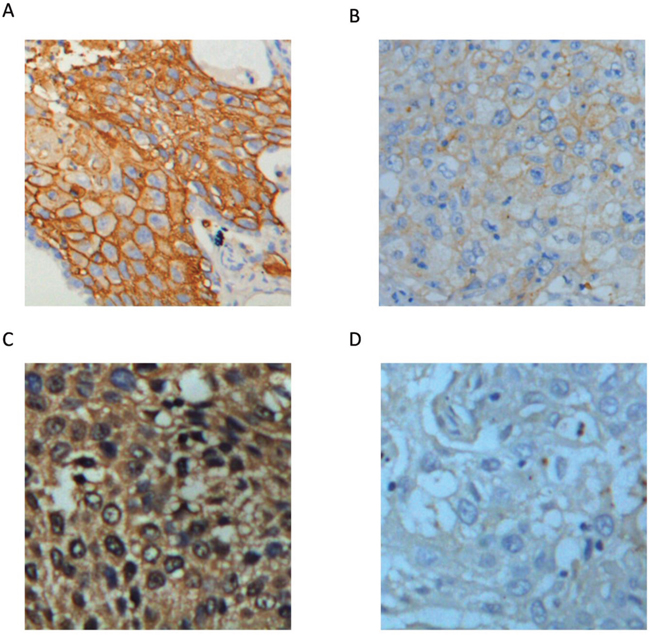 Receiver operating characteristic curve analysis (ROC) was used to determine whether solid tumor size could be used to predict occult nodal metastasis. The results showed that the area under the curve was 0.724 ± 0.047 (Figure 3A). With an optimal cutoff value of 2.5 cm, sensitivity and specificity for the prediction of occult nodal metastasis were 71.7% and 71.9%, respectively.

We further used ROC to determine whether SUVmax could be used to predict occult nodal metastasis. The results showed that the area under the curve was 0.767 ± 0.066 (Figure 3B). With an optimal cutoff value of 4.35, sensitivity and specificity for the prediction of occult nodal metastasis were 92.9% and 55.0%, respectively. 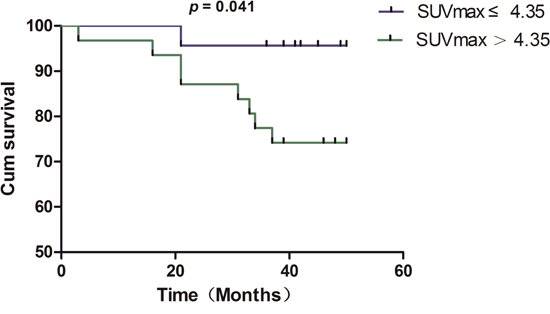 Figure 4: Kaplan–Meier survival analysis reveals a significant difference in overall survival between NSCLC patients with SUVmax ≤ 4.35 and those with SUVmax > 4.35 (p = 0.041).

Multivariate analysis revealed that both SUVmax of the primary tumor and tumor size were independent predictors for occult nodal metastasis in lung cancer (Table 3).

SUVmax of the primary tumor represents the local glucose uptake ability. As a higher SUVmax predicts an increased likelihood of nodal metastasis, we conclude that intratumoral glucose metabolism affects local nodal metastasis [12, 13]. Therefore, inhibition of tumor glycolysis to reduce its SUVmax may not only help treat the primary lesion, but also inhibit metastasis to the local lymph nodes, thereby prolonging patient survival. A great deal of biological information is contained within the FDG uptake value of the primary tumor in NSCLC. A better understanding of the FDG uptake mechanisms could explain the more aggressive behavior of NSCLC cells [14].

54 patients (34 men and 20 women; age range, 31–77 y; mean age, 59 y) who were diagnosed as T1-T2N0M0 lung cancer staged by 18F-FDG PET/CT were included in this retrospective study. They were confirmed to have NSCLC based on histopathological findings and underwent surgery after 18F-FDG PET/CT between December 2006 and December 2009 at Shanghai Jiaotong University affiliated Ren Ji Hospital. Eligibility criteria were: T1-T2 N0M0; patients did not receive chemotherapy/radiotherapy before PET/CT scanning; performed lobectomy and lymph node dissection; complete case records including age, sex, tumor size, pathological type and histologic differentiation were available; tissue specimens for immunohistochemical staining were available. The Human Investigation Ethical Committee of Shanghai Jiao Tong University affiliated Ren Ji Hospital approved this study. All procedures involving human specimens were performed with written informed consent according to the Declaration of Helsinki.

A dedicated whole-body PET/CT tomography (SIMENS) was used for all PET/CT imaging. Image acquisition was performed with an integrated PET/CT device. Immediately after CT scanning, PET was performed to cover the identical axial field of view. PET-image data sets were reconstructed with segmented correction for attenuation using the CT data. For semi-quantitative analysis of the 18F-FDG uptake, irregular regions of interest (ROIs) were placed over the most intense area of 18F-FDG accumulation. The maximum SUV (SUVmax) was obtained for the 1-pixel ROI corresponding to the maximum pixel value in the tumor. Lymph node with SUVmax < 2.5 was regarded as being benign (cN0). Two experienced nuclear medicine physicians, blinded to the clinical history, independently evaluated the PET images and reached a consensus on all image results.

IHC analyses were performed on paraffin-embedded lung cancer tissues. After microtome sectioning (4 μm slices), the slides were processed for staining. Primary antibodies against glucose transporter 1 (GLUT1) and hexokinase 2 (HK2) were purchased from Abcam. The slides were scored for intensity of staining (0 to 3) and the percentages of cells with scores of 0 (0%), 1 (1% to 9%), 2 (10% to 49%), and 3 (50% to 100%) were determined [16]. The IHC score (0 to 9) was defined as the product of the intensity and percentage of cells. Protein expression was judged as high when the IHC score was greater than or equal to 4.

Continuous variables were analyzed by the Student’s t test, and the results were expressed as mean ± standard deviation. Dichotomous variables were analyzed by Chi-squared test or Fisher’s exact test. Kaplan-Meier survival analysis was performed to explore the association between survival and SUVmax. Multivariate logistic regression analysis was used to determine the factors associated with nodal metastasis. Two-sided p values of less than 0.05 were considered statistically significant. All analyses were performed using SPSS software, version 16.0 (SPSS Inc, Chicago, IL).

This retrospective study has revealed that NSCLC patients with high SUVmax and large tumor size on PET/CT constitute a high-risk group for occult lymph nodal metastasis. Thus, these two PET/CT parameters may provide useful information about the metastatic ability of NSCLC, and are of potential clinical significance. However, this is a retrospective study and the sample size was relatively small. Further studies are needed to confirm our results and determine whether the combination of SUVmax and tumor size can be used to predict occult lymph nodal metastasis.