This study investigates survival of patients diagnosed with pancreatic neuroendocrine tumor with liver metastases based on local treatment on the primary tumor. Patients diagnosed with stage IV PNET between 2010 and 2014 were identified from the Surveillance Epidemiology and End Results database. Cancer-Specific Survival and Overall Survival were examined. A total of 191 patients with pancreatic neuroendocrine tumor with liver metastases were included in this analysis. There were 47 patients (24.6%) who received surgical resection and 144 (75.4%) who did not. Patients with N1 stage was more likely to be treated with surgical resection. The results showed that surgical resection of primary tumor was associated with Cancer-Specific Survival (p = 0.028) and Overall Survival (p = 0.025) benefit. Not receiving surgery, being unmarried and N1 stage are factors associated with poor survival. This study reveals that local treatment on the primary benefits both Cancer-Specific Survival and Overall Survival in PNET patients with LM. This may be suggestive for the management on this patient population.

Pancreatic neuroendocrine tumors (PNETs), originating from cells of the neuroendocrine system, are uncommon and contribute 1.3% to 10.0% of all pancreatic tumors, with an incidence rising at an annual rate of 3.65/10000 people per year [1–3]. PNETs represent a heterogeneous group of neoplasms showing a large variation in tumor behaviors and a wide spectrum of clinical manifestations [3–7]. Furthermore, a set number of PNETs are non-functional with vague clinical symptoms, which led to a significant clinical challenge to diagnosis in clinic work, and many of them were diagnosed when developed distant metastases [7]. By searching the data from the surveillance epidemiology and end results (SEER) database from 2010 to 2014, we found about 21.2% (297/1399) were diagnosed at stage IV, with metastases frequently found in the liver (87.9%, 267/297 of cases). Moreover, liver metastases is the most powerful predictor of survival in PNETs, the 5-year survival rate (75–99%) was significant worse than patients without liver metastasis (13–54%) [1, 8, 9]. Therefore, liver metastasis play a significant role in PNETs. A special analysis on the treatment of PNETs with liver metastasis (PNETLM) is of great significant.

Many study advocate the resection of the primary pancreatic tumor in the setting of metastatic disease. The most recent European Neuroendocrine Tumor Society (ENETS) and North American Neuroendocrine Tumor Society (NANETS) guidelines also recommend removing the primary pancreatic tumor [1, 10, 11]. However, whether such strategy suitable for PNETLM is still lack of clinic evidence. Therefore, we used the surveillance epidemiology and end results (SEER) database to investigate the survival outcomes of patients with PNETLM treated with or without surgical resection of the primary tumor in a contemporary cohort.

To better understand the patient selection, we analyzed the clinicopathological factors associated with removal of primary tumor. As shown in Table 2, the univariate analysis demonstrated that patients with age < 65, T3–T4 and N1 stage were associated with increased possibility to receive surgery. The multivariate analysis showed that patients in N1 stage were more likely to be treated with surgical resection.

Table 2: Factors associated with receipt of surgical resection of the primary tumor

Liver metastases have been highly observed in PNET when diagnosed, and which are also one of the most significant prognostic factor. Although surgical resection has been suggested as the mainstay treatment by American Society of Clinical Oncology Clinical Practice Guideline, few studies investigate the role of surgical resection in treatment of PNETLM. Keutgen, et al. used the SEER database to show that resection of the site of the primary nonfunctioning PNET is associated with greater survival in patients with distant metastases and could therefore be considered as a additional treatment option [12]. However, such study have not distinguish liver metastasis from other site metastasis, which play a specialized and key role in PNETs.

We explored the association between local treatments on PNETLM and the survival outcomes relying on SEER database. In order to make clear distinctions between liver metastasis and other metastasis and give a certain analysis on the liver metastasis in PNETs, we excluded the patients with other metastasis, have other primary tumors and those lost the surgical information on lymphatic metastasis. Analysis of factors associated with receipt of surgical resection indicate that atients in N1 stage is likely to be treated with surgery. This result may because patients who received primary tumor surgical resection may have more chance to find lymph node metastasis during operation than those did not who may mostly evaluated the lymph node status based on imaging examination. Further analysis showed being married was associated with survival benefit. Married status is shown to play a favorable prognostic role in various cancers [13–15], which may owe to the potentially significant impact of social support on cancer treatment and survival. In addition, multivariate Cox regression confirmed that patients receiving surgical resection of primary tumor had better CSS and OS.

It has been demonstrated that a lower tumor burden at baseline is associated with better prognosis [16–19], which may because debulking surgery may improve the effect of subsequent local treatment for metastases. For example, debulking surgery previous to PRRT could have a radiobiological rationale, since the morphology of smaller lesions usually allows higher dose concentrations, resulting in a higher chance of tumor response [16]. On the other hand, the resection of the primary tumor in the setting of liver metastasis has been showed to benefit overall survival (OS) [17]. It has been proved that primary tumor resection prior to PRRT can be safely proposed in G1–G2 PNETs with diffuse liver metastases because it seems to enhance response to PRRT and to improve prognosis [17].

The biological mechanisms of liver metastasis in PNETs has seldom reported for its low incidence. However, such progression may similar to pancreatic cancer. Firstly, liver recognized as the most common site of pancreatic tumor metastasis most due to anatomical situation [20]. Secondly, Circulating tumor cells (CTCs) can also colonize their tumors of origin, which is termed “tumor self-seeding” [21]. A subpopulation of migrating cancer stem cells (CSC) is also essential for such metastasis [22]. Thirdly, “metastatic niche” may already existed in the liver even before the metastases formed [23, 24], a tumor microenvironment may created with help of a variety of immune cells [23, 25] or cytokines [26]. These changes in tumor biology during metastasis in pancreatic cancer may be in common with PNET, which also experienced a high ratio of liver metastasis. Such change could be implicated in the process of tumor cells dissemination and also shed light on the rationale for primary tumor resection.

There are several limitations to the present study. First, it is limited by the retrospective nature; therefore, selection bias could occur. Second, demographic information provided by the SEER database did not include functional classification, comorbidity, performance status, smoking, alcohol consumption and other detailed factors. The contribution of these factors to the survival benefit could not be evaluated. And these confounders could not be adjusted in multivariate analysis. Third, data on therapy for liver metastasis are not included in SEER database. As therapy for liver metastasis is the mainstay treatment for PNETLM, the impact of surgery on systemic therapy could not be estimated. Last, the SEER database provide the data about the location of distant metastasis since 2010, and the most recently data about PNET was 2014, therefore, only patients from 2010 to 2014 were involved. However, the sample involved in this study is enough, as a positive association was found between primary tumor resection and long survive.

Despite the stated limitations, our study reveals that local treatment on the primary benefits both CSS and OS in patients with PNETLM. This may be suggestive for the management on this patient population. Further prospective trails are still needed to validate our results.

The data of this study were extracted from SEER-18 registry of the National Cancer Institute. The database is publicly available and we retrieved the data using SEER*Stat Software Version 8.3.4. Because the SEER database used deidentified data, this study was exempted from institutional review board oversight. We identified patients diagnosed between January 1, 2010 and December 31, 2014 with a primary site of ‘pancreas’, with American Joint Committee on cancer (AJCC) stage (7th edition) IV and with International Classification of Diseases for Oncology, Third Edition (ICD-O-3) codes 8150/3, 8151/3, 8152/3, 8153/3, 8155/3, 8156/3, 8240/2, 8240/3, 8241/3, 8242/3, 8243/3, 8246/2 and 8249/3 from SEER database. Patients without liver metastases, with extrahepatic metastases, with other primary tumor, unknown regional lymph node information (scope regional lymph node surgery) were excluded. The process of patient selection is shown in Figure 2. 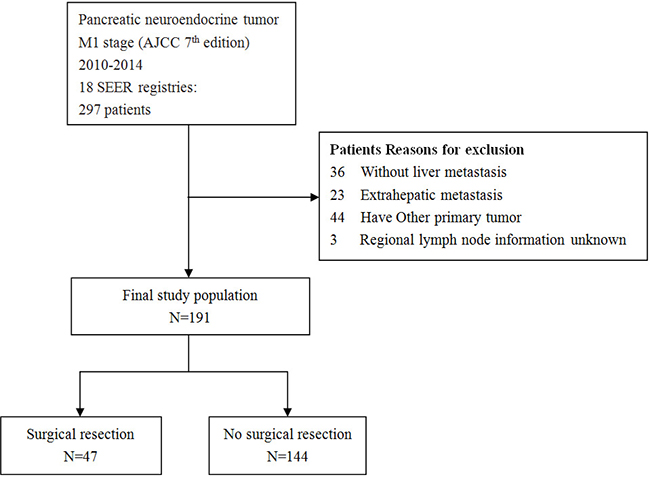 The following demographic information of each patient was collected: age at diagnosis, gender, primary site of tumor, T stage, N stage, M stage, surgical resection of the primary site (yes or no), marital status, SEER cause-specific death classification, survival months, and vital status. Pancreatic cancer-specific survival (CSS) was defined as the time from diagnosis to death from pancreatic cancer and OS was defined as the duration from diagnosis to death from any cause. Information on systemic treatment was not provided by SEER database.

The primary endpoint of this study was CSS and the secondary endpoint was OS. Chi-square test was utilized to compare the differences in clinical and demographic features between patients treated with or without surgical resection. CSS and OS were examined by using the Kaplan-Meier method with log-rank test. The associations between demographic factors with receipt of surgical resection were evaluated using Logistic regression analysis. Multivariable survival analyses of CSS and OS were conducted using the Cox proportional hazards model. P < 0.05 was considered as statistically significant. All statistical analyses were performed using IBM SPSS Statistics 22.0 (IBM, Armonk, NY, USA).

This study was approved by the Clinical Ethics Committee of Peking University Third Hospital.

This study was supported by a grant from the National Natural Science Foundation of China (No. 81672862) and the Capital Characteristic Clinical Application Research and Achievement Promotion Project (No. Z171100001017121).