Coronary artery disease (CAD) is a major cause of cardiovascular morbidity and mortality worldwide [1]. However, we do not totally understand its fundamental mechanism. As a multifaceted and polygenic illness, CAD may result from interactions between various environmental influences and genetic factors [2, 3]. Epidemiological studies have demonstrated that CAD is the consequence of several risk factors, such as age, body mass index (BMI), smoking, less exercise, gender, diabetes, hypercholesterolemia and low intake of dietary fiber. In addition to these risks, it is undeniable that hereditary factors play a crucial role. Until now, both genome-wide association studies (GWASs) and candidate gene studies have stated that numerous genetic variants are associated with susceptibility to CAD in various populations [4, 5].

Cytochrome P450 (CYP) enzyme 2J2 (CYP2J2) is one of the predominant CYP epoxygenase isoforms and is abundantly expressed in heart tissue [6]. In endothelial cells and cardiomyocytes, epoxyeicosatrienoic acids (EETs) are predominantly synthesized by CYP2J2 [7], which has been considered a vascular protective factor [8, 9]. In CYP2J2, the G-50T (CYP2J2-76G > T; *7 allele) polymorphism in the proximal promoter disturbs a Sp1transcription factor binding site and brings about less CYP2J2 transcription [10]. Some previous researches have reported that the CYP2J2 – 50T variant allele was associated with CAD risk [10, 11], but there are a few opposing published results [12–19]. In addition, a meta-analysis has been conducted to assess the relationship between the CYP2J2-50T polymorphism and CAD risk and had a negative result, which was not analyzed in detail [13]. Against this background, we add some new studies in our meta-analysis and present a more comprehensive analysis to evaluate the association between the CYP2J2-50T polymorphism and CAD risk.

The process of study selection is shown in Figure 1. In total, there were 419 potentially relevant publications found through the literature search. Then, we screened the titles, abstracts and full-texts and excluded 409 articles due to unrelated research, review and data duplication. Lastly, a total of ten studies, including 7063 cases and 10,453 controls, were included in this meta-analysis. Among these publications, only two studies contained different population research. In the controls of all included studies, genotype distributions were consistent with Hardy-Weinberg equilibrium (HWE). The detailed characteristics of each study are listed in Table 1, and Table 2 shows the genotype distributions of the CYP2J2 G-50T polymorphism in cases and controls. 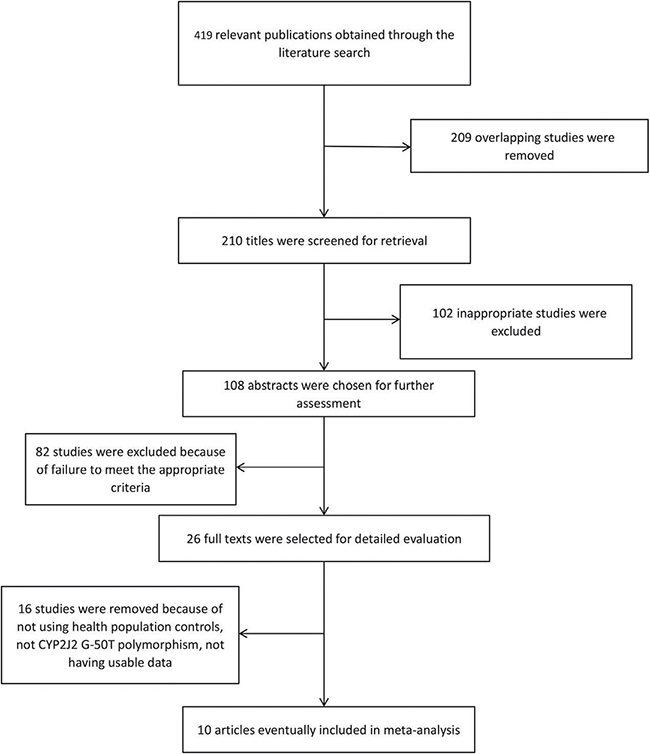 Figure 1: Flow diagram of studies through the meta-analysis.

Table 2: The genotypes distribution and allele frequencies of eligible studies

HWE(P), the P-values of the Hardy-Weinberg equilibrium test of control group.

Table 3: The main results of this meta-analysis

OR: odds ratio; *OR with statistical significance. 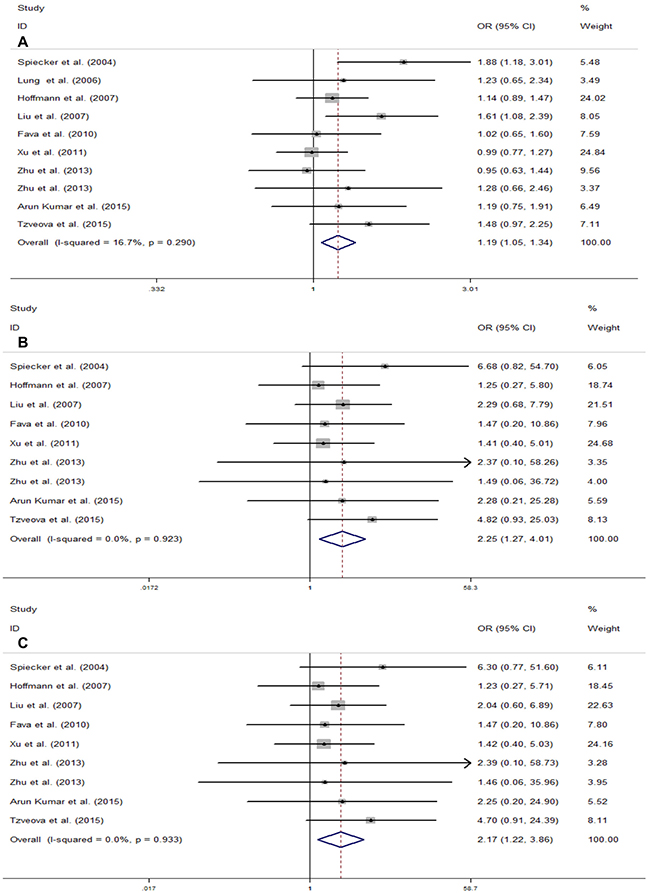 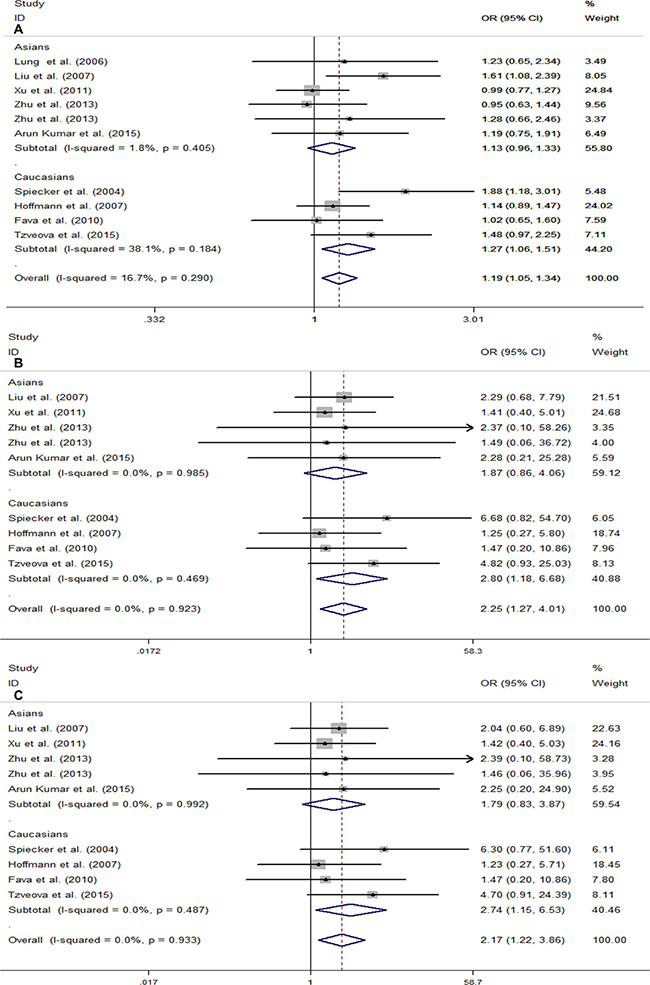 Figure 3: Forest plots for stratification study of the association between CYP2J2 G-50T polymorphism and CAD risk under the three genetic models. (A) T vs. G; (B) TT vs. GG; (C) TT vs.GG/GT. For each study, the estimation of OR and its 95% CI are plotted with a box and a horizontal line. ◊, pooled ORs and its 95% CIs.

The stability of the overall results was also assessed by sequential omission of individual studies. Sensitivity analysis demonstrated the reliability and stability of our results because the combined results were not significantly influenced by any individual study. We used funnel plots to detect publication bias and the shape of the Begg 's funnel plot found no obvious asymmetry, which suggests the absence of publication bias in the overall meta-analysis (Figure 4). The results of Egger’s test were as follows: (allele: P = 0.218; homozygous: P = 0.632; recessive: P = 0.635), which further provided no evidence of publication bias. 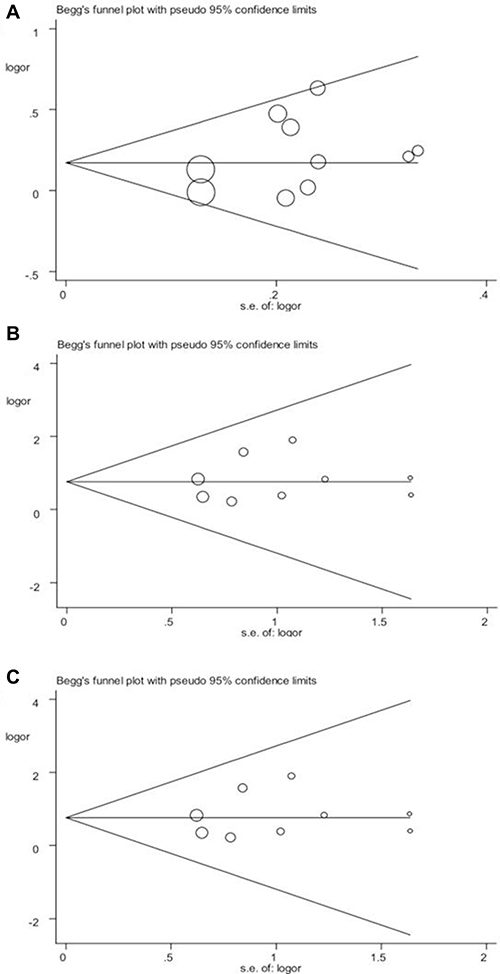 Figure 4: Begg’s funnel plot of publication bias in the meta-analysis of the association of CYP2J2 G-50T polymorphism and CAD risk under three genetic models. (A) T vs. G; (B) TT vs. GG; (C) TT vs.GG/GT. Each point represents a separate study for the indicated association.

Like other CYP2 family genes, CYP2J2 contains nine exons and eight introns and spans ~40.3 kb on human chromosome 1, band p31.3–p31.2 [20]. EETs, synthesized by CYP2J2, have many important physiological actions including maintaining cardiomyocyte viability suffering from damaging stimuli and enhance the recovery of cells from oxygen deprivation [21]. The G-50T (also called rs890293) polymorphism is one of the most relevant polymorphisms associated with CAD according to polymorphism frequency and functional importance [22]. Decreasing quantity of CYP2J2 protein may affect EETs generation and then subsequently increase the incidence of CAD. The study by Spiecker et al. has proven that the G-50T polymorphism can lead to less CYP2J2 gene transcription by disturbing a Sp1 transcription factor binding site [10]. Several studies have aimed at investigating the relationship between the CYP2J2 G-50T polymorphism and CAD risk and have found there is an association between them [10, 11]. Conversely, other researches [12–19] also had comprehensive studies of the role of the CYP2J2 G-50T polymorphism in the development of CAD risk and found no significant association between the CYP2J2 G-50T polymorphism and CAD susceptibility, which indicates that the development of risk of CAD may not be affected by variant alleles.

Therefore, a meta-analysis containing 10 case-control studies with 7063 cases and 10,453 health controls was performed to comprehensively evaluate the effect. As far as we know, the result of a previous meta-analysis showed that there was no significant association between CYP2J2 G-50T polymorphism and CAD risk in dominant model comparisons (OR = 1.12, 95% CI = 0.95–1.31) and additive model comparisons (OR = 1.15, 95% CI = 0.97–1.36) [13]. However, the study carried out by Xu et al. did not offer any detailed data in the meta-analysis and did not comprehensively evaluate the association in all comparisons. Thus, we subsequently added some new eligible researches into our more complete meta-analysis to extensively investigate the role of the CYP2J2 G-50T polymorphism in the development of CAD. Our study suggested that CYP2J2 G-50T polymorphism was not associated with CAD risk under the dominant model and heterozygote model. However, there was a significant relationship between the CYP2J2 G-50T polymorphism and CAD risk in other genetic models (T vs. G, OR = 1.19, 95% CI = 1.05–1.34; TT vs. GG, OR = 2.25, 95% CI = 1.27–4.01; TT vs. GT + GG, OR = 2.17, 95% CI = 1.22–3.86). In addition, the stratification analyses of studies by ethnicity found that the CYP2J2 G-50T polymorphism in Caucasians was significantly associated with an increased risk for CAD in the three genetic models. Nevertheless, we did not found any association of the polymorphism with CAD risk in the Asian population, and these results suggest that the SNP may be an ethnicity-dependent factor in CAD progression. Besides, the significant association only can be found under the allele model, recessive model and homozygote model, which suggested that the rare TT genotype may play a crucial role. To clarify inconsistence between our consequence and previous meta-analysis result, we performed a comparison and found a few reasons. First, previous study did not comprehensively evaluate the association in all comparisons and might ignore some association in a part of all genetic models. Second, we added new eligible researches and omitted unqualified articles when we perform a meta-analysis in some genetic models.

Some limitations of this meta-analysis should be addressed. Because no adjustment for other covariates was performed, our analyses based on unadjusted OR values may accordingly have low power when we estimated the real association. As the number of the included studies might be insufficient, some stratification analyses do not have enough statistical power to identify the effect. Environment factors may influence the association of the CYP2J2 G-50T polymorphism with CAD risk through a gene-environment interaction. However, we did not evaluate the potential gene-environment effect in this study because of the unavailability of the original data.

In conclusion, our meta-analysis found that the CYP2J2 G-50T polymorphism among Caucasians was associated with CAD risk in certain genetic models, such as the allele model, recessive model and homozygote model. Thus, we can speculate that in Caucasians, the rare TT genotype may play an important role in the progression of CAD. However, more studies based on larger sample sizes are required to validate the present findings in the future.

Studies included in this meta-analysis had to meet the following criteria: (a) case control studies of the association of the CYP2J2 G-50T polymorphism with CAD risk; (b) subjects in the case group had confirmed diagnoses; (c) genotype frequencies for both cases and controls were available; and (d) the distribution of genotypes in the control group was consistent with HWE. If there were numerous articles from the same study, we selected the most relevant one in our analysis. Case reports and reviews were excluded.

Information was independently extracted by two authors and disagreement was addressed by discussion between them. From each included study, we extracted the following information: the author’s first name, publication year, country, ethnicity of the study population, source of controls, genotyping methods, sample size of cases and controls, genotype distribution of the CYP2J2 G-50T polymorphism in cases and controls, and HWE of the control group. Quality of studies was assessed according to the predefined criteria based on previous observational studies (Table 4) [23, 24].

We assessed the strength of association of CYP2J2 G-50T polymorphism with CAD risk with odds ratios (ORs) and 95% confidence intervals (CIs) in the allele model (T vs. G), heterozygote model (GT vs. GG), homozygote model (TT vs. GG), recessive model (TT vs. GG + GT) and dominant model (TT + GT vs. GG). The significance of combined ORs was determined by using the Z-test. The Q test was used to evaluate the heterogeneity between the included studies. If P > 0.05, which indicated no significant heterogeneity, we chose the fixed-effects model (Mantel-Haenszel) to combine the data; if not, the random-effects model (DerSimonian-Laird) was applied. Subgroup analyses were performed according to ethnicity. We detected publication bias by using Begg’s funnel plots and Egger’s test. The stability of results was assessed by a sensitivity analysis performed by sequential omission of individual studies. The χ2-test was used to check the HWE of genotype distribution in the control group. All the tests were two-sided and P < 0.05 was considered statistically significant. The data analyses were performed using STATA v12.0 software (Stata Corporation, College Station, TX, USA).

This study was supported by grants from National Natural Science Foundation of China (81470370).