*These author have contributed equally to this work

Over-production of reactive oxygen species (ROS) shall cause oxidative damages to human osteoblasts. It is the key contributor of osteoporosis or even osteonecrosis [1–4]. Hydrogen peroxide (H2O2) is one primary ROS [5, 6]. H2O2 elevation causes profound oxidative stress, osteoblast dysfunction and apoptosis [7–10]. In vitro studies have been adding H2O2 to the cultured human osteoblasts to establish a cellular model of osteoporosis/osteonecrosis [7–10]. This model would help to understand the pathological mechanisms of ROS-induced osteoblast injuries, and to develop possible intervention strategies [11–16].

Nrf2 (NF-E2-related factor 2)-ARE (anti-oxidant response element) pathway is principally mediated by the ubiquitin proteasome system [17–22]. In the resting state, Nrf2 forms a complex with its repressor protein Keap1 (Kelch-like erythroid cell-derived protein with CNC homology [ECH]-associated protein 1) and ubiquitin E3 ligase cullin 3 (Cul3). This leads to Nrf2 protein degradation via ubiquitin-mediated proteolysis [17–22]. Conversely, Nrf2 activation will result in impairment of the Nrf2 ubiquitination and degradation [23–25]. That will allow Nrf2 stabilization, accumulation and translocation to the nucleus, where it transcriptionally activates targeted anti-oxidant genes [17–22]. 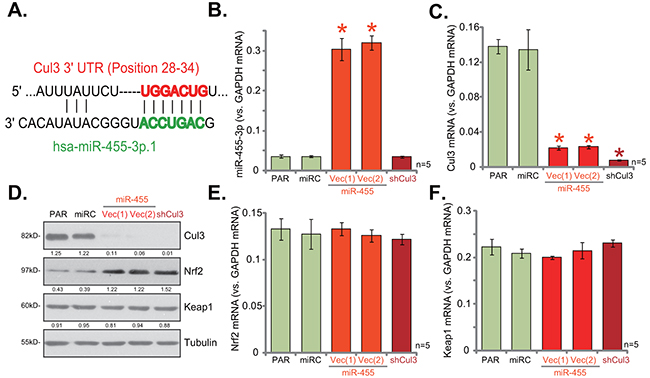 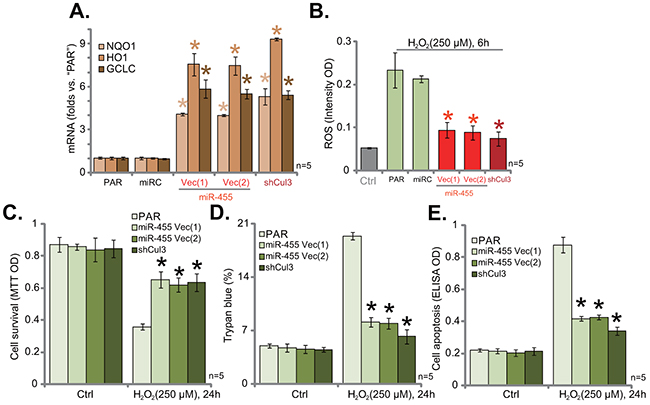 Figure 3: miR-455 anti-sense induces Cul3 upregulation and Nrf2 degradation. hFOB1. 19 cells were transfected with miR-455 anti-sense (“Anti-miR-455”, for 5 rounds) or miR anti-sense control (“Anti-miRC”), cells were then subjected to qRT-PCR assay (A, B, and D) and Western blotting assay (C) of listed miRNA and genes. Expression of listed proteins was quantified, and was normalized to loading control Tubulin (C). Data were shown as mean (n=5) ± standard deviation (SD). *p<0.05 vs. “Anti-miRC” cells. Experiments in this figure were repeated four times, and similar results were obtained.

Based on the above results, we speculate that Cul3 over-expression should cause Nrf2 protein degradation. To test this hypothesis, the Cul3 expression vector was constructed, and was introduced to hFOB1. 19 cells. Via puromycin selection, two hFOB1. 19 cell lines with the Cul3 construct were established, namely “Cul3 Vec(1)/(2)”. As shown in Figure 4A, Cul3 mRNA level was significantly increased in the two stable lines. Western blotting assay results in Figure 4B confirmed the expression of exogenous Cul3 (Flag-tagged) and endogenous Cul3 in the two lines. Notably, exogenous over-expression of Cul3 indeed led to Nrf2 protein degradation in hFOB1. 19 cells. Nrf2 mRNA (Figure 4C) and Keap1 expression (Figure 4B and 4D) were unchanged with Cul3 over-expression. 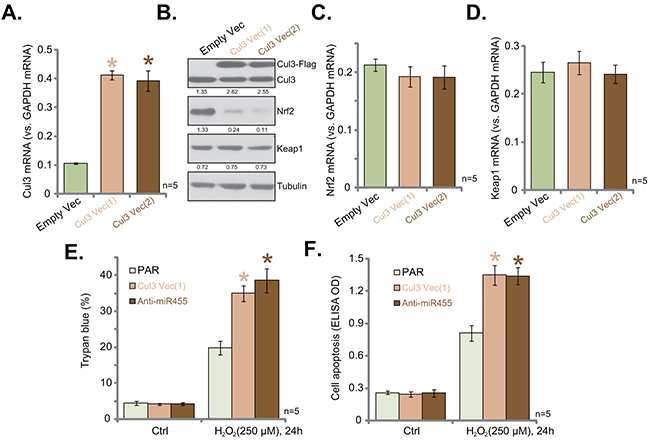 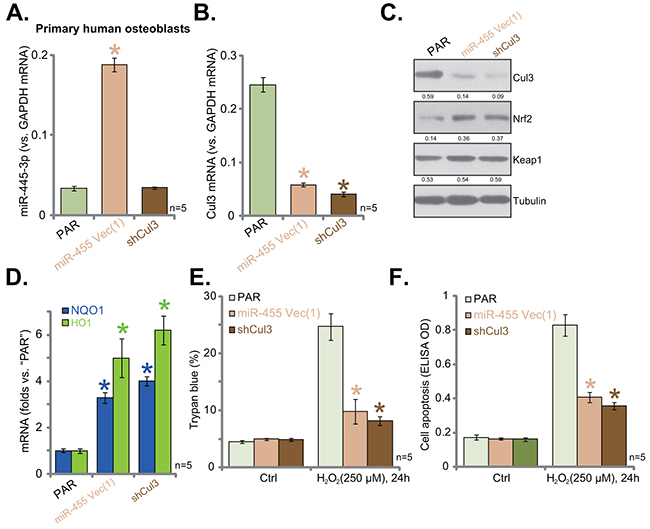 Cul3 is a member of the cullin-based ubiquitin ligase family, which is required for Nrf2 degradation [43]. Cul3 forms a complex with Hrt1 and BTB-domain containing proteins, which functions as an E3 ligase to bring Keap1 to ubiquitination and degradation [43]. On the other hand, Cul3 inhibition, silence or mutation will cause inhibition of Nrf2 degradation, and Nrf2 protein stabilization [44]. Recent studies have proposed that miRNA could be a novel and promising strategy to provoke Nrf2 signaling activation (mostly by targeting Keap1) [28, 29]. Very few have focused on miRNA-mediated targeting of Cul3.

Together, our results suggest that miR-455 activates Nrf2 signaling via silencing Cul3, and protects human osteoblasts from oxidative stress.

The hFOB1.19 human osteoblastic cell line [45, 46] was obtained from the Cell Bank of Shanghai Institute of Biological Science (Shanghai, China). Cells were maintained in α-modified essential medium (α-MEM) supplemented with 10% FBS, under 37°C in the presence of 5% CO2. Cells were fully differentiated as described [47].

The trabecular bone fragments from healthy donors were minced into small pieces, which were digested by incubation with 5 mg/mL collagenase D (Sigma) for 90 min at 37 °C with agitation. The resulting trabecular bone fragments were further digested with 0.5 mg/mL collagenase D overnight at 37 °C. Cells were then filtered through a 70-μm nylon mesh, and were placed onto the culture flasks with the described medium [48]. Medium was changed three times a week until reaching confluence, and were fully differentiated as described [47]. Primary human osteoblasts were used for further experiments stating at passage 3. The protocols of using human tissues and cells were approved by Ethics Board of Nantong University. Written-informed consent was obtained from each donor.

Human osteoblasts (5000 cells per each well) were initially seeded onto 96-well plates. Following the applied treatment, the MTT dye (20 μL/per well, 5 mg/mL, Sigma) was added to the supernatant for two hours. Afterwards, the optic density (OD) absorbance of MTT at 450 nm was measured by a microplate reader to reflect cell viability.

Thenucleosomal histone-bound DNA fragmentation is the characteristic marker of cell apoptosis, which was examined by the commercial available ELISA kit (Roche, Shanghai, China), using the anti-histone antibody and a secondary anti-DNA antibody. The ELISA OD at 450 nm was tested as the quantitative measurement of cell apoptosis.

The miR-455 precursor was purchased from RiboBio (Guangzhou, China), which was inserted to the pSuper-GFP-puro vector (Ambion, Shanghai, China) to establish the miR-455-expression vector. Human osteoblasts were transfected with the miR-455 construct or the scramble non-sense microRNA control (“miRC”, Genepharm, Shanghai, China) using the Lipofectamine 2000 reagent (Invitrogen). Stable cells were selected by puromycin (2.5 μg/mL, Sigma) for another 96 hours. Over 95% of stable cells were GFP positive. miR-455 (3p) expression was always verified by the qRT-PCR assay.

The hFOB1. 19 osteoblasticcells were transfected with 20 nM of miR-455 anti-sense (“Anti-miR-455”, Ambion, Shanghai, China) by Lipofectamine 2000 (Invitrogen). After two days, cells were split and were transfected with Anti-miR-455 again. This process was repeated for five rounds for a total of 10 days. Expression of miR-455 in the stable cells was examined by qRT-PCR assay. The Ambion miRNA anti-sense negative control (“Anti-miRC”) was transfected to hFOB1. 19 cells as the control cells.

Equivalent amount of total cellular proteins (30 μg per lane) were extracted by a RIPA buffer (Biyuntian, Wuxi, China), and were separated by the 10% SDS gel, prior to transfer onto polyvinylidene difluoride (PVDF) membranes (Millipore, Shanghai, China). The blots were then blocked in 5 % (m/v) milk dissolved in Tris-buffered saline with 0.05 % (w/v) Tween-20 (TBS-T), and were probed with the designated primary and secondary antibodies. The protein signals were visualized under an enhanced chemiluminescence (ECL) system (Amersham Bioscience, Shanghai, China). β-Tubulin (“Tubulin”) was always tested as the loading control. The images were analyzed with Image J software.

The full-length human Cul3 cDNA was synthesized by Genepharm (Shanghai, China), which was inserted to the pSuper-puro-GFP-Flag vector (Addgene, Shanghai, China). Lipofectamine 2000 was applied to transfect the Cul3 construct to human osteoblasts. Puromycin (2.5 μg/mL, Sigma) was added to select stable cells for 96 hours. Over 98% of cells were GFP positive. Expression of endogenous and exogenous (Flag-tagged) Cul3 in the stable cells was verified by Western blotting assay and qRT-PCR assay. The empty pSuper-puro-GFP-Flag vector was transfected to the control cells.

Data were expressed as the mean ± SD [45, 57]. Comparisons between groups were performed via one-way ANOVA and then Student-Newman-Keuls test (SPSS 18.0). The p values < 0.05 were considered statistically significant.

The authors have no conflict of interests.

10. Salopek TG, Marghoob AA, Slade JM, Rao B, Rigel DS, Kopf AW, Bart RS. An estimate of the incidence of malignant melanoma in the United States. Based on a survey of members of the American Academy of Dermatology. Dermatol Surg. 1995; 21:301-305.

17. Vriend J, Reiter RJ. The Keap1-Nrf2-antioxidant response element pathway: a review of its regulation by melatonin and the proteasome. Mol Cell Endocrinol. 2015; 401:213-220.